What did you do?

MrsPrice96 said:
WOW!!! Congratulations. That is awesome and inspires me!!! I am training for my first 5K. My daughter signed us up to do the Lion King Virtual 5K's and we are doing all 3. I am not a runner and never have been so this is WAY out of my comfort levels and abilities. My husband is military and super fit and my daughter does CrossFit and was also a former D1 athlete. This makes me stay away from working out but they are always encouraging me. I am NO WHERE near there level but am just beginning my journey.

Thanks for your post and inspiring me to keep at it one day at a time.
Click to expand...

My first “official” runDisney race was the Iron Man 5K. After, that my first challenge was the 2020 Virtual Attractions Challenge. That is how it really started in terms of me taking on the longer distances.

Can’t believe I’ve actually inspired someone, (never thought someone would say that about me). Keep at it, and you will definitely accomplish it! I never thought I’d be able to do these events.

I too, am running the Lion King Challenge. Keep us updated on your training/races!

GenerationX said:
We've just entered that wonderful six month period (April - September) when I easily have enough light and warmth to run before breakfast, before lunch, or before dinner. And I've done one of each in the last week. Feels good.

One wacky thing I've been dealing with the last several months is overlapping toes. For some odd reason, my second toes on both feet are now overlapping my big toes. I've started wearing gel toe spacers and toe straps for as much of the day as I can tolerate, and I'm getting socks with separate toe sections. My shoes are not that tight, though I regularly wear "indoor" shoes all day because my feet are always cold. Any advice?
Click to expand...

I didn’t have exactly that, but when I first started running I got some nasty blisters on longer distances (I’ll spare you how nasty), but two things ultimately worked for me. First, toe socks, the really good ones (they were like $15 but worth it) worked immediately. Then, I got a few new pairs of shoes that fit a little better and that was the key, I prefer good cushioned regular socks (or good compression socks for longer than a half) and didn’t need the toe socks after I found the right shoes. I also learned not to do a long live race with a pair of shoes I hadn’t tested on a long training run or two (so that I could stop without feeling bad about it).

Did 5ish with DW & DS Sunday. Strangest training I've ever done I think. DS was on his his bike for the first 3 1/2ish, and it was hilly, so had to sprint down the hills to keep up with him, and then help push him up the other side. After we dropped the bike off and just ran/walked, he got tired, so I ended up doing like 1/2 mile rucking up hill with him on my back. When DW started running uphill I just groaned and followed.


JillC LI said:
Hi all. Glad to see everyone keeping up the good work. I finally caved and went to an orthopedist last week about my hamstring injury. To my surprise he thought I actually have a slight hamstring tear from the force of my fall on the umbrella stand, not just a bruise. And he said I had been "too active" for the 8 weeks following the injury for it to heal and stop bleeding internally. As I suspected he told me no running for two weeks and then we'll reassess. It's been one week now and I'm going nuts (and it still hurts). I start PT today so hopefully that will help speed the recovery. Sigh.
Click to expand...


JillC LI said:
How old is the little guy now?
Click to expand...

Quick run this morning, little more then a 5K distance.

I still use the Galloway method for all runs.

Started my 5K training a few weeks ago. Never ran before. Was walking at an avg pace of 20.42 2 months ago, but was casual and not knowing I was going to be training soon. Did my best time yesterday of 15.25 avg pace with some interval jogging.

Did 6 with my DW Sunday, about a 13min/mi pace. Raining and trails with occasional hills. Great time out.


MrsPrice96 said:
Started my 5K training a few weeks ago. Never ran before. Was walking at an avg pace of 20.42 2 months ago, but was casual and not knowing I was going to be training soon. Did my best time yesterday of 15.25 avg pace with some interval jogging.
Click to expand...

Sunday - 1st in-person race since wine/dine 2019. It was 37 degrees and snowing (explain that to me??) at race time and it quickly changed over to rain at gun time. My feet/shoes were soaked within the 1st 1/4 mile and I was completely unprepared wardrobe-wise for this as the weather forecast did NOT call for wet. Add on top of that 25+ mph winds and the feels-like temp was 26 degrees. Was doing 10:2 intervals and was alright until about mile 8 when I hit a mental wall and was so cold/wet my legs would not cooperate. I was able to walk the back 1/3 of the half and ended up at a 14:33/mi pace overall which TBH wasn't completely awful.

Ran this afternoon. Little more then a 5K distance.

Ran this morning. Had a much faster run then normal 5K distance.

Premium Member
So I haven’t done much running in the past 10 days, but I have gone on some very long walks with a fair amount of elevation gain. The shortest of the walks was a bit more than 3 miles and the longest was 6.6 miles (and this one had the most elevation gain to it as well).

Premium Member
Did the May version of the Myrtle Beach Marathon yesterday and, by the grace of God, managed to finish.

Reminded me of the unusually hot Disney Marathon day in 2020. Usually this one is early March, but they pushed it back to May 1 due to covid concerns. I also made the rookie mistake of not training for this one, (after my ultra in February, I decided to take 3-4 weeks off to rest the knees, which pretty much turned into 10-12, I don’t think I’d run 26 miles total in the last 2-2.5 months

But, all in all, it was a fun race and mercifully, fairly flat. Nice to have a sort of larger event coming back live.

The medals were huge! Got the finisher medal and a triple-spinner challenge medal for having also done the Charleston Marathon (which was back in January and turned virtual only). 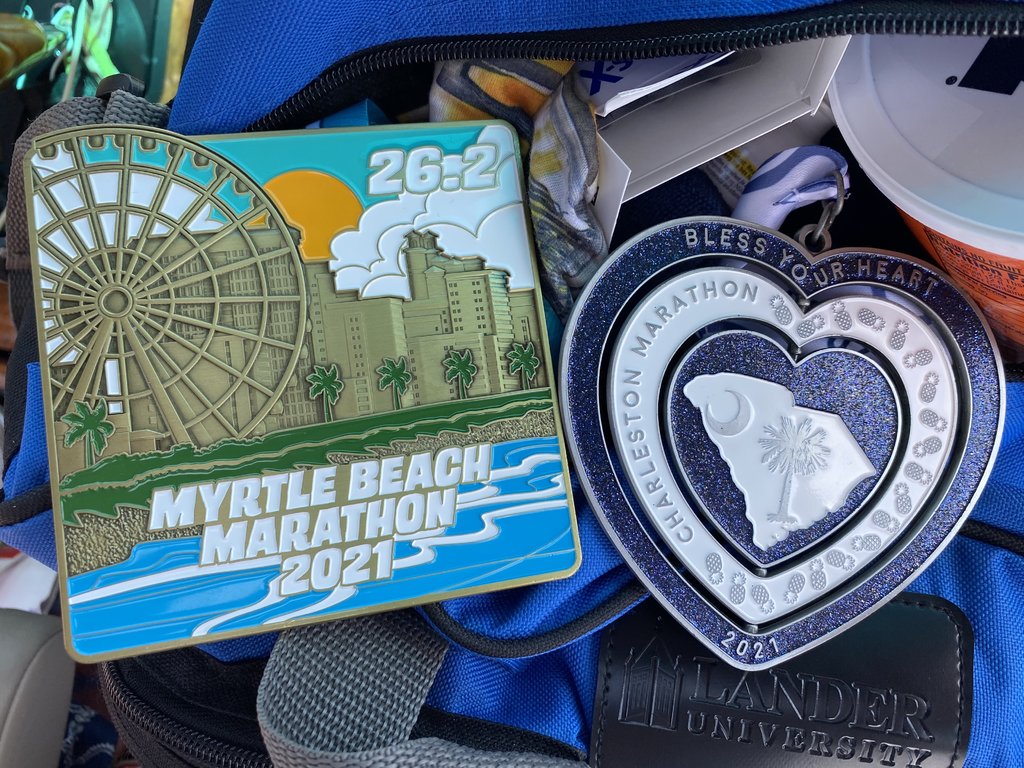 For those curious about how they ran it (for comparison’s sake as live races are returning or if anyone is looking at any other upcoming events from Capstone Races): They skipped their expo this year and mailed bibs (or had a local location for pick up, but no race day pick up) and just handed out participant shirts, finisher shirts, and medals at well spaced tents after the finish line. They did corrals, which they haven’t done in the past. There were about 1000 runners in the marathon (about the same as last year), about 1500 for the half, and about 500 for the 5k all starting from the same general area in waves. I think last year there was closer to 4000-4500 between all the races, so I imagine a lot of the half and 5k regulars either decided to skip or went with the virtual option. Typically this race has a festival-type atmosphere after with food and beer vendors and bands and such (and encouragement for friends and families to come along with games and such for the kids), they skipped all that (no non-participants were allowed near the finish area) this year and encouraged people to grab their sack of food (just pretzels, a granola bar, and some sort of energy shake mix) and continue moving out of the finish area.
Last edited: May 2, 2021

Premium Member
2.5 miles tonight with my running group in PERFECT weather - not too hot, not too cold

Took over a week off after my crappy half on the 25th. It's officially too hot to run outside season in Florida so it's back to the treadmill for me. 2.20 @ 13:38/mi for 30 minutes

Went out for a run this morning. Little more then a 5K distance.

Premium Member
I'm still in maintenance mode. Need something to train for. All the spring/summer local 5K races are back and in person.

Almost forgot to post but I went out for a run this morning. Little more then a 5K distance.

A 3ish mi hike up & down a mountain on Sat. With a 6yo and the dog, it was practically a run at times. Sun was about 4ish easy with my DW.

Wow haven’t posted in a while.