LittleBuford said:
There’s very little whining and hyperbole coming from those in this thread who are openminded about the changes and an awful lot coming from those who are staunchly opposed to them. It’s ironic that the people repeatedly accusing others of fragility and indignation are the very ones most guilty of these behaviours.
Click to expand...

Ironic as the “open minded” people are refusing to open their minds to people who are not offended (which is most of us) and demand everyone agree that jungle cruise is somehow racist and needing change.

TalkingHead said:
These Jungle Cruise changes are only at DL and WDW, right? But doesn't the Hong Kong ride also have indigenous figures pointing spears at the boats? Why isn't that version of the ride getting addressed?
Click to expand...

Because corporate “Disney” doesn’t have as much control over those parks and apparently the people that run those are not whining children that want to remove anything that offended a small group of activists even though almost everyone enjoys the rides and stories as they are.

rylouisbo said:
agreed. i would just add that in speaking about how the paradigm surrounding racism shifting very very fast, it seems to me that it is shifting so quickly because it is being forced from top down. from my perspective there seems to be an small more elite group of politicians/celebrities/companies/academia that are creating new rules for everyone else and pushing it through society when the majority of society is not on board with the new standards. i think that is part of the problem, its not a natural shift and i think that is part of why people are getting more divisive.
Click to expand...

So, your saying this “forcing” people to recognize the current stage of race relations from the top down is not too different Than the way the south reacted to the Brown v Board court decision on desegregating schools 50ish years ago?
G

Touchdown said:
Why are we focused on Splash in the Jungle Cruise thread?

The native attack sequence has always been uncomfortable for me since I became an adult, it’s incredibly racist and entirely inappropriate. No Africans ever acted like this. Trader Sam, I’m more on the fence about (especially in Disney World) but the native village sequence is Rin Tintin in Africa racist and is long overdue for a change. I can’t believe we are arguing about this?
Click to expand...

Personally I like the aggressive man, sorry I mean person, people or human, eating vegetation concept. Can have vines attempting to reach out to the guests passing by in the boats to snare them in order to consume them. karma for the plants!

rylouisbo said:
Ironic as the “open minded” people are refusing to open their minds to people who are not offended (which is most of us) and demand everyone agree that jungle cruise is somehow racist and needing change.
Click to expand...

One can be open minded and vehemently disagree with flat-earthers. Because the shape of the earth isn't based on opinion.

I'm not taking any particular position here, but one wonders what a complete "Woke Disneyworld" might look like?

It's a Small World updated to:

Oh, you still here? Yeah, that's it. Disney's just a It's a Small World ride.

Disneyson said:
I mean I can't believe I'm going into the weeds on this, but I definitely think this would be a fun story to build out, and certainly would bring some diversity to the forefront. The only thing I can see going wrong is the overuse of a pre-recorded spiel. I think it would be helpful for some of the... less enthusiastic skippers... to hit a button during a traffic jam and have Alberta spit some joke out about the missing party. I personally really enjoyed the Mrs. Jobson storyline in KS, but I was definitely the minority. I would be really ticked if a per-recorded spiel took over the entire show, I personally think it would kill the ride in the way that it killed Movie Ride.
Click to expand...

It might be fun to start off the journey with a pre-recorded spiel then have the skipper "accidentally" change channels on the radio / speaker "shorts" out leaving the skipper to deliver narration for the rest of the tour. Though I'm not certain I'd trust the company not to just move the entire thing to a pre-recorded program.

WDW Pro said:
Disney is most certainly a very, very liberal company at the top. They're also global corporatists which means they turn off their ultra liberal viewpoints whenever dealing with Asia. So in the US, they care about transphobia, while simultaneously in China they thank governments running genocidal concentration camps and slave labor for allowing them to film near the prison complexes.

The Twitter brigade does have significant sway with starting sociopolitical campaigns against companies. Disney's stock is entirely inflated at the moment by future speculation into Disney+... they'll protect it at all costs.

That's not a real critique anyone is making. Don't cartoonize the people you disagree with just so you can score imaginary points.

Disney made the Splash announcement entirely to keep them on the side of BLM and protect their company (specifically streaming service) from criticism.

I've never heard anyone claim the government is censoring Disney's speech. With Bob Iger attempting to be the US ambassador to China, Disney is closer to being the government than being oppressed by the government. Also, Nancy Pelosi's family just bought enormous numbers of Disney stock, so it's hard to see how anyone would think Disney is under the boot.

Again, stop cartoonizing those with whom you disagree.

I had never heard a single person complain about the Jungle Cruise of any race, ethnicity, or creed before the past two years. I also find the terms "black" and "white" to be vestigial terms from ethnic hierarchical understandings of a Euro-centric past. When we refer to ourselves as "white" or "black", we're artificially separating ourselves within a psychological construct using the most disparate terms possible.

Not next, but in the future, yes. Next is Peter Pan.

Again cartoonizing the arguments. The actual argument is that since Disney sees no problem with filming near concentration camps, thanking governments that use concentration camp and slave labor, and since Disney sees no problem using products made by industrialized slave labor (because it's cheaper)... the whole "we're doing this to be sensitive to people's needs" schtick rings hollow.

Not sure how helpful it was, but thanks for trying!

Will the chimps be in Santa hats for the Jingle Cruise? Discuss...

@Kgp0793 Sorry, but the museum volunteer in me has to say, "For your safety, please do not sit on the railing."

Brief diversion (apologies if it has already been posted).

ORLANDO—In an effort to update its attractions for the current era, Disney announced Thursday that it would be installing animatronic Christian missionaries to convert natives on the Jungle Cruise ride. “We understand that people have been offended by these Christless savages, which is why we’re...
www.theonion.com 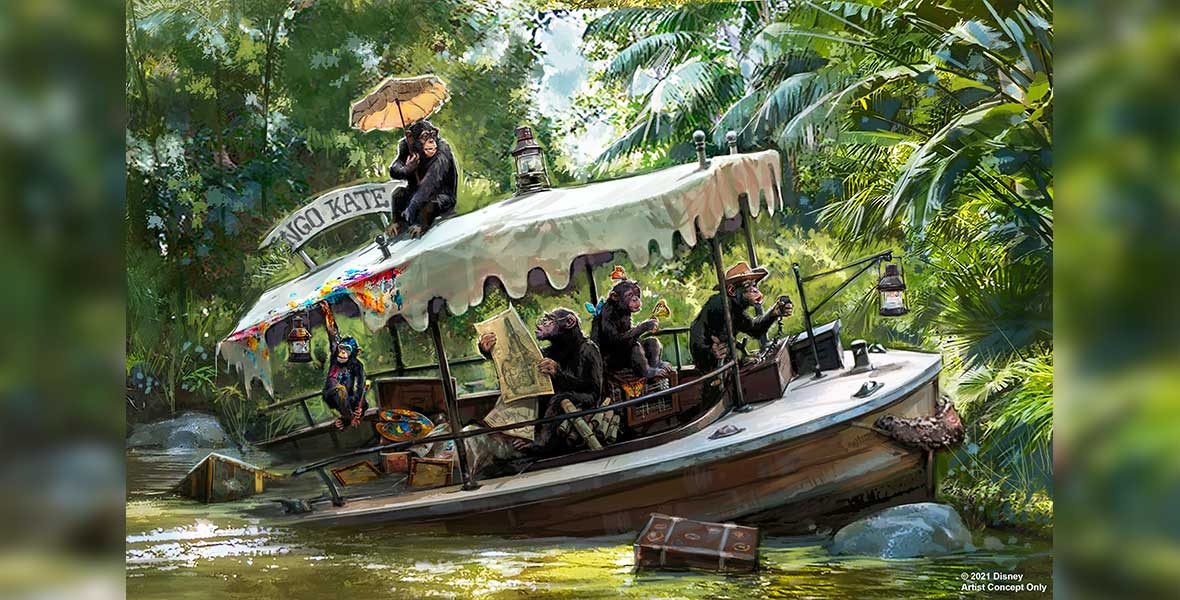 We sat down with Walt Disney Imagineering Creative Portfolio Executive Chris Beatty to get all the details on everything coming to the Nile.

This has a nice write up w/ Q&A on the changes, etc.

Moderator
Premium Member
Please stay on topic. And if you are unable to discuss this in a polite manner, please don't bother posting.

BTW, if you find someone using an emoji inappropriately, just report the post and when prompted for "reason" please just mention the emoji.

i'm a bit disappointed that the changes will be exactly the same for both US parks, i enjoy spotting the nuanced differences between the same rides at different parks. like having slightly different cast order going up the pole or something.

"What you see at Walt Disney World at the Magic Kingdom will be exactly what you see at Disneyland Resort. We really do want to tell a very cohesive story on both coasts. It’s been fun to look at the nuances between the two attractions and what makes them slightly different, but the scenes that we’re adjusting are the same."

We sat down with Walt Disney Imagineering Creative Portfolio Executive Chris Beatty to get all the details on everything coming to the Nile.

This has a nice write up w/ Q&A on the changes, etc.
Click to expand...

Doesn’t the DL version lack the temple, though? Wish they’d plus our tiger...

The Mom said:
Please stay on topic. And if you are unable to discuss this in a polite manner, please don't bother posting.

BTW, if you find someone using an emoji inappropriately, just report the post and when prompted for "reason" please just mention the emoji.
Click to expand...

Can we do the same thing we did for the Splash topic? Move this thread to politics and make one for the attraction discussion

EagleScout610 said:
Can we do the same thing we did for the Splash topic? Move this thread to politics and make one for the attraction discussion
Click to expand...

Color me surprised that it isn't in the wastebin Politics & Other Social Diseases forum already.
K

WDW Pro said:
I had never heard a single person complain about the Jungle Cruise of any race, ethnicity, or creed before the past two years
Click to expand...

I appreciate your perspective even when I don’t always agree. This is one of those times. I have heard complaints from a variety of people for many years about Jungle Cruise’s cannibals, head hunters and just natives. Strangely, more recently Small World has popped up,too. That one I have a harder time understanding.
Share:
Facebook Twitter Reddit Pinterest Tumblr WhatsApp Email Share Link