I love the new logo for the Disney's Hollywood Studios!

britain said:
And yes, I do this for a living.
Click to expand...

Overall I prefer the new proposed archway to the existing, but yours is much better.

Spared no expense I see...

It covers classic Disney, Pixar, and Star Wars. These will be the 3 pillars of the park going forward. Makes perfect sense.

What a great way to show that you have absolutely no respect for the parks and consider them just extensions of your marketing machine.

Can’t wait for Iger to be gone so they can maybe move away from this mentality.

Tom Morrow said:
What a great way to show that you have absolutely no respect for the parks and consider them just extensions of your marketing machine.

Can’t wait for Iger to be gone so they can maybe move away from this mentality.
Click to expand...

Don't forget Chappie. This is firmly in his wheelhouse (cheap, generic, and IP-centered). His stench can't leave P&R soon enough. I just hope he doesn't move up the ladder and only moves out the door.

Tom Morrow said:
What a great way to show that you have absolutely no respect for the parks and consider them just extensions of your marketing machine.

Can’t wait for Iger to be gone so they can maybe move away from this mentality.
Click to expand...

I don't disagree, but if their main goal is to communicate with an audience less familiar with the parks... "So where the heck is Star Wars Land?" "Oh hey, it's right there on this Hollywood sign. Must be there."

As exciting as Pixar Pier.

This is one of those things that should have just been put on a news site. They didn't need to hype it up... at all. I haven't been this disappointed since I sent away for 3d glasses out of a comic book. ….I could not see anyone's underwear.

Well, I've tweeted to Iger. Let's see if he reads and if saner minds will prevail. 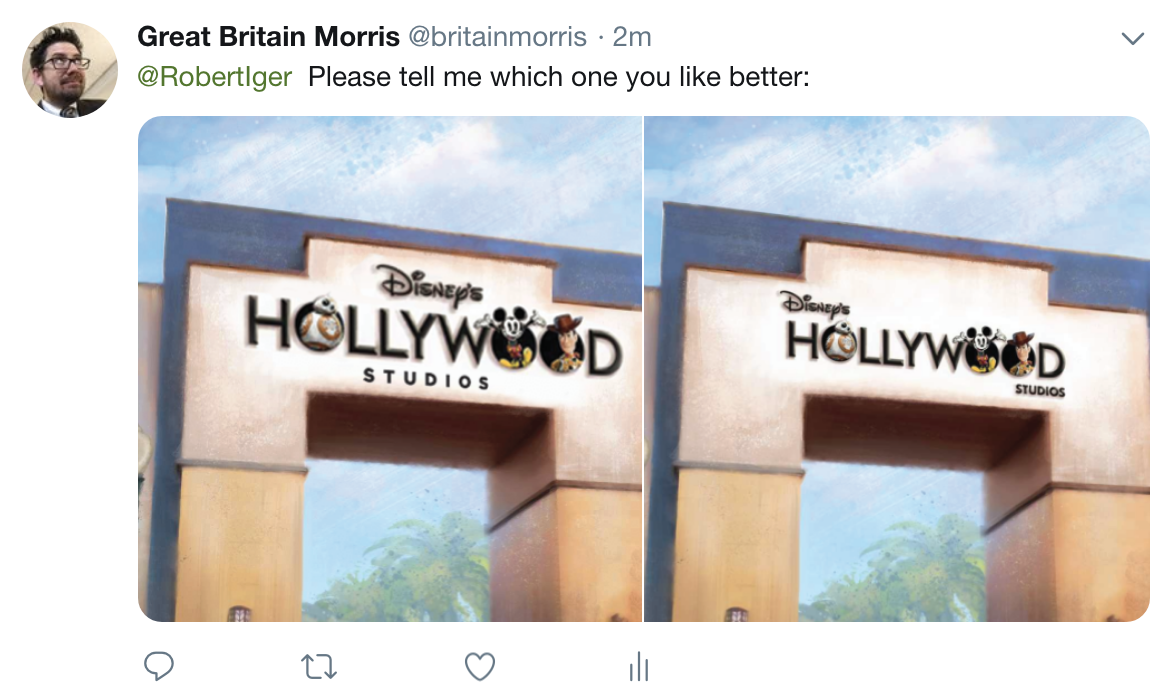 Premium Member
I was tricked into replying in a different thread...


MisterPenguin said:
Compare it to the old logo...

Mickey Mouse "making a movie" with the clapboard is replaced by the newer version of Mickey that will be in MMRR.

"Hollywood" is emphasized while "Studios" is deemphasized.

The major "studios" of DHS are represented: LucasFilm, Pixar, and DAS.

All part of the plan to move from "making movies" to "being in the movies", although, the place where movies are made, i.e., Hollywood, is still there as the placesetting of all the public areas that one goes through to get to an attraction or Land.

Seems a natural progression in line with removing the movie-making elements from the Muppet fountain.

Though, if it were up to me, that whole proscenium would be removed in place of another movie theater facade to re-orient the projection show to align with the fireworks.
Click to expand...

britain said:
Well, I've tweeted to Iger. Let's see if he reads and if saner minds will prevail.

Love how not just centering and resizing makes it look 10x better, but love the font of "Studios" and how it is spaced. Reminds me a bit of the MGM Studios logo.

Keep us posted! Gawd I hope he at least considers it.

Put this in the other thread but will repost here:

The new logo in no way embodies the spirit of the park because it embodies nothing. It's incredibly generic. In its smaller form it will be even more generic without the characters, and in it's larger form it is emotionless and limiting. At least the name is staying. But I could come up with something better in a minute on Microsoft Word.

It's still Hollywood Studios but they're dropping the studio theme. Brilliant.

They're switching from one meaning of 'studio' (a physical building) to another meaning (a production company).