redshoesrock said:
I tend to lurk more than not (due to being a CM), but this was a piece of news that came my way that I wanted to share. You're welcome to believe it or not.

We (the CMs in the part of MK where I work) had a meeting with two of our leaders who were talking about various internal things (high guest satisfaction ratings, great job, here's where we can improve, etc etc). Our leaders also mentioned that, while there won't be a huge celebration for the 45th anniversary coming up next year, Disney is already planning for the 50th anniversary. They said that the current plans are to completely overhaul both Frontierland and Tomorrowland both in the facades and adding new attractions. They said to expect some big, big changes in those two lands, although they admitted they didn't have any specifics as to what "New" Frontierland and "New" Tomorrowland would look like, nor what attractions would be added.

I suppose they could of been lying, but I've never known our leaders to deliberately do that - they've always been on the up-and-up, even to the point of saying, "Yes I know something, but I'm not allowed to say anything yet about it." So, like I said, take that news for what it is. We all know Disney, they could completely change their mind six months later and cheap-out on the whole thing. Just wanted to let you guys know.
Click to expand...

I thought they were going to make Cinderella's castle into Else's castle?
E

Advertisement
They're bringing back the pink birthday cake castle.

articos said:
You can be at least a little excited.
Click to expand...

marni1971 said:
So long as it stays a celebration for the fan and isn't corporate-invaded like Epcots 30th was.
Click to expand...

So there's some truth to this? Just went from skeptical to very interested. A lot can change between now and then and we know how Disney can be.

Great news- All the other parks are really up to speed. The one that really needs the most help is MK. DHS and Epcot are fine.

Half kidding- but with Disney springs being finished, DAK being the park it will be in 2017- and if SW and Pixar at DHS can be done by 2020-2021 as rumored- and MK getting the DL/DCA repairs/maintenance as well as a new tomorrow/frontier land (and new ride in frontier land? Although I'd assume it's just BTM getting the DLP/DL makeover- which is fine)- we could really have a phenomenal WDW in 6 yrs.
Except epcot- we've heard nothing from there

Frontierland?! Weird. Tomorrowland is a shoe-in though.

andysol said:
Except epcot- we've heard nothing from there
Click to expand...

Hoping they add, not just revamp existing attractions. Let's see, what else (besides Splash AND Big Thunder) is on the chopping block in Frontierland if they go the swap-out route. Wonder if CB Jamboree stays?

Mike S said:
I'm going to be skeptical on this, but man would I be excited if it's true.
Click to expand...

Remember what I always say, if you assume all Disney rumors are false, you will be right more times then you are wrong.

cspencer96 said:
I would love for the new electrical parade to be as @brb1006 said - more like Spectromagic than Paint the Night, but with the technology of Paint the Night. That would be awesome. I just hope it doesn't end up being a rave, like PTN is.
Click to expand...

But all the cool kids and their coachela?!?

If true, I seriously hope that the Tomorrowland Speedway goes BYE BYE

SosoDude said:
Hoping they add, not just revamp existing attractions. Let's see, what else (besides Splash AND Big Thunder) is on the chopping block in Frontierland if they go the swap-out route. Wonder if CB Jamboree stays?
Click to expand...

I'd guess Tom Sawyer Island would be part of the chopping block, no? Some of us still enjoy it, but most guests could care less.

agree
a complete waste of space

Sage of Time said:
Frontierland?! Weird. Tomorrowland is a shoe-in though.
Click to expand...

Frontierland could do with expansion, but what is there is perfectly fine in my opinion.

Along with Tomorrowland which desperately needs work done to it (which goes without saying), I do feel "old" Fantasyland could do with some work (especially thematically).

Aside from the tents which need to go, I'd love to see a return of the more muted colour scheme which would match Bavarian architecture better. Whilst some could argue the current colours work since it's based on fantasy, to me it doesn't bring you into the world like it once did: 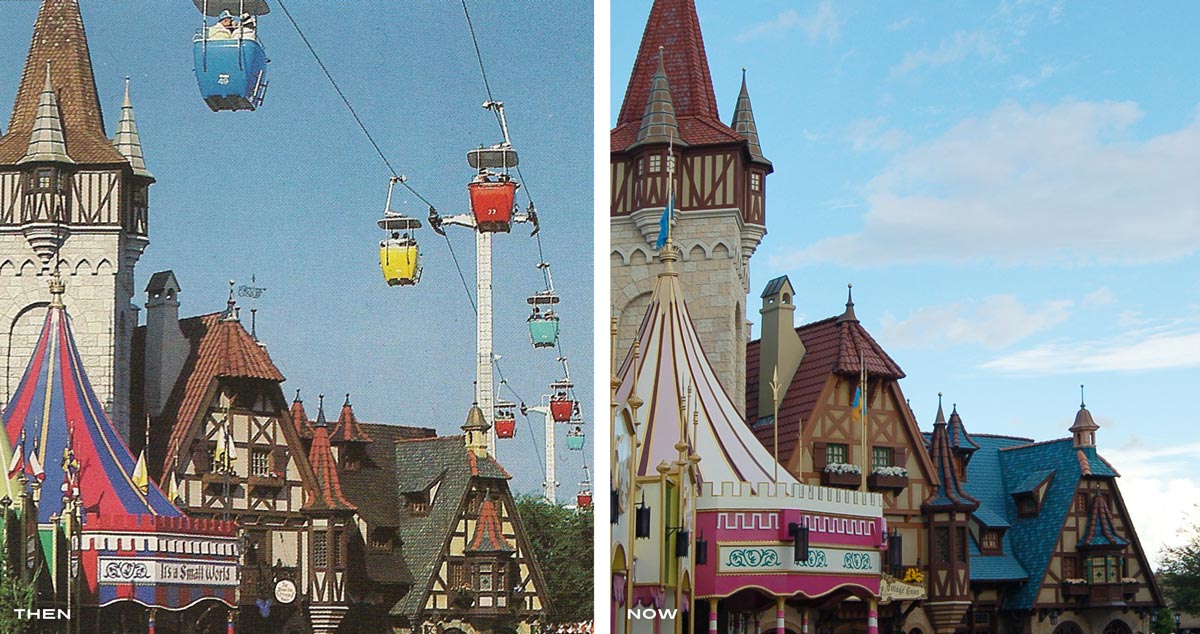 There's plenty of space that could and should be used at the Magic Kingdom (including the Speedway), so hopefully Disney properly utilise it all.

ChampDisney said:
Here's to hoping for a brand new track with some cool onboard audio for Space Mountain!
Click to expand...

I agree - returning Space Mountain to its former state with more durable track should be priority one at MK IMO. Lights on the cars, stars and comets on the ceiling, all visible from the queue and the PeopleMover and of course no trim brakes!

On the edge of glory.

I think they'll need to replace DEP long before the 50th. That parade is (literally, in the case of a few floats) falling apart. It doesn't have another 6 years in it.
Last edited: Jun 14, 2015

Otamin said:
Aside from the tents which need to go, I'd love to see a return of the more muted colour scheme which would match Bavarian architecture better. Whilst some could argue the current colours work since it's based on fantasy, to me it doesn't bring you into the world like it once did:

I, of course, agree the tents need to go. I really wish we could finally get the better IASW facade.

I actually like the new colors better- but man- that's a great pic and comparison. Thanks for sharing those! Also really shows how out of place that skyway really was. Cool at the time, but glad that's gone. And look at the size of the trees in that before pic!

As much as I didn't want to respond to this- what's a thread without mentioning universal?
Couple of points-
1- universal isn't Disney. Not even close. But I am absolutely envious of their break-neck speed of attractions being added.
2- I don't understand their choices at all. They don't "add" e tickets. They "replace" e tickets. Yes, BTTF and Jaws (arguably) weren't E-Tickets anymore, but what amazing franchises. Yes, we get Harry Potter and Simpsons. Both extremely relevant- and likely timeless. But my problem with their choices of IP are the "huh" ones. Jimmy Fallon? Fast and the furious? Transformers? None of those will ever trigger the nostalgia that Disney provides. Harry Potter will. Something like Jaws, will. King Kong will too. So ya- in 10 yrs, when no one gives a rip about transformers movies or furious movies, they'll give us another E ticket. In the meantime, people will still be riding pirates, splash mountain, space mountain, BTM, Peter Pan, etc etc across the street . Harry Potter fits that mold. Jimmy Fallon will not. That's like putting Ellen somewhere. What idiot would do that? No one will Care over time. Oh wait...

50th anniversary, I'd be happy with anything at this point. Was there for the 40th and we'll just say that was a big fat let down. I remember going for the 25th and 20th when I was younger. *fingers crossed*

It'll probably be just another lame marketing plan and nothing more.
You must log in or register to reply here.

What effect has Covid have on the 50th anniversary
2