tcool123 said:
In news for Splash Mountain fans :
while zip-a-dee-doo-dah has been being removed across disney properties worldwide the song “Everyone Has A Laughing Place” was still apart of the main entrance loop.
Click to expand...

For MK I assume?

Sharon&Susan said:
For MK I assume?
Click to expand...

yes! Will hear Disneyland’s audio loops in August for the first time in my FIRST EVER TRIP TO DISNEYLAND

(and the greater Los Angeles area)

ThemeParkPriest said:
After Covid hit, I watched through the Disney animated movies that I had not seen. Although I have not re-watched some of the movies I've seen in years, I created my rankings below (each tier has the movies ranked in order, too).

Fair enough but Meet The Robinsons doesn’t deserve this

ThemeParkPriest said:
After Covid hit, I watched through the Disney animated movies that I had not seen. Although I have not re-watched some of the movies I've seen in years, I created my rankings below (each tier has the movies ranked in order, too).
Click to expand...

Awesome list, I would put Bolt higher and Brother Bear lower on my list. I thought BB was boring and was only redeemed a little bit by Phil Collins.
Last edited: May 23, 2022

spacemt354 said:
I too have been inspired by it, don't have the time to watch them all atm, but in time would like to - while others tend to rank MCU films or Pixar - archiving and ranking the Disney animated canon is something rarely have I seen - kudos @TheOriginalTiki !
Click to expand...

Grew up with a bunch of old VHS tapes so always had a wide collection of animated films and was able to watch a lot of the obscure ones in my early teens and have revisited all of them throughout the years. 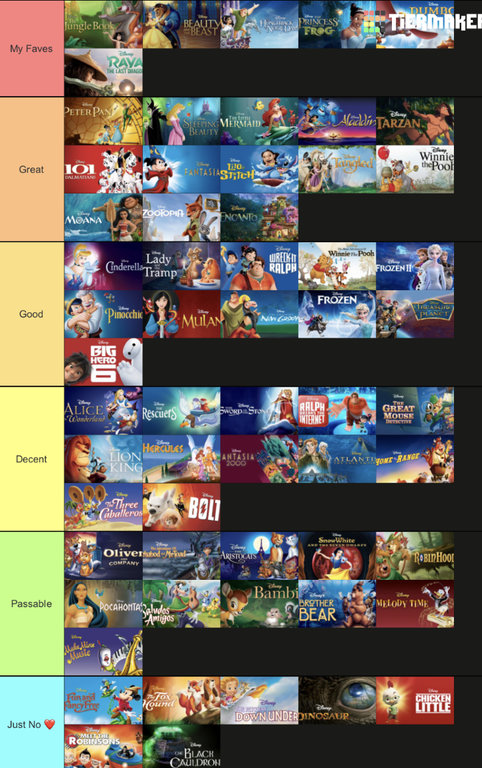 A lot of my personal opinions obviously affect the ranking of all the films but I stand by my rankings.

I was doing a watch-through about a year ago. Stopped in the '70s and picked it up a few months later at the Renaissance. I still haven't seen a few of the newest ones, but I'll get to them eventually. 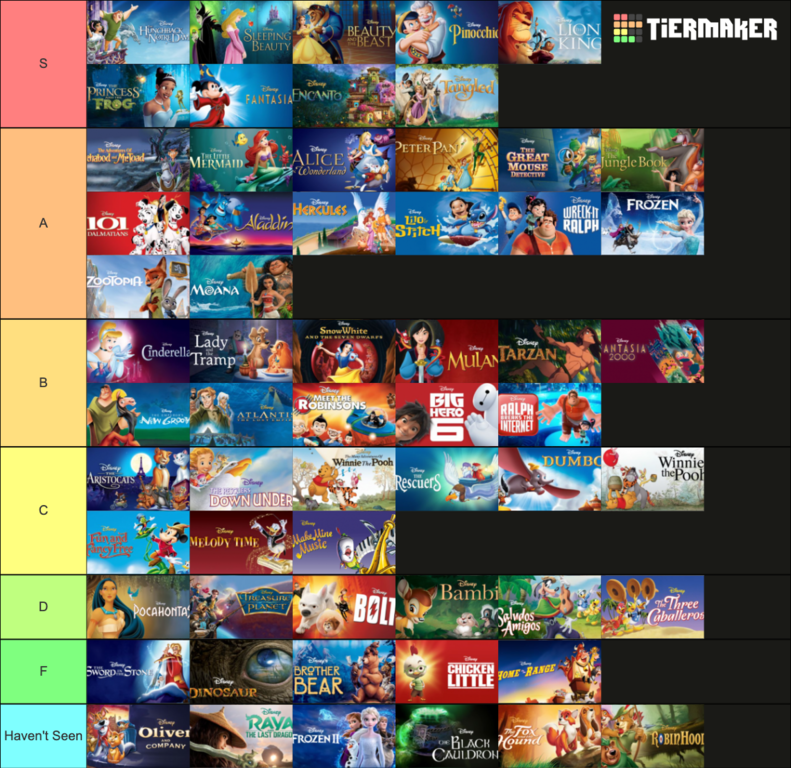 Really great to see everyone so hyped about the ranking podcast. It was definitely a rewarded endeavor on my part. A big reason for doing it was to see how Encanto stacked up against the rest of the cannon since I pretty much became obsessed with that movie after it came out. I'll admit that I got kind of burned out by the marathon by the time I got to the films that I've already covered on the podcast, which sort of speaks to the dangers of doing a podcast and how it affects my media consumption to begin with but that's a different conversation.

I think the coolest thing about the marathon was seeing the evolution of the medium in real time. There's definitely peaks and valleys in the lineup, at an almost alarmingly consistent rate, but it always made for a fascinating context to view these films. With sixty films in the cannon, I think this was a great time to do a list like this. @PerGron I commend you for how detailed and thoughtful your written reviews are. I tried to start a letterbox account associated with this project but couldn't keep up with it. Hoping to eventually write a long article about it and post it as a blog or something, as I have similar issues with the LB interface.

JokersWild said:
I was doing a watch-through about a year ago. Stopped in the '70s and picked it up a few months later at the Renaissance. I still haven't seen a few of the newest ones, but I'll get to them eventually.

The Black Cauldron is definitely worth watching from an animation history point of view. The main character is pretty awful, but the atmosphere and the genuine menace of the Horned King is top notch. It's super fascinating to see the styles of Don Bluth and Tim Burton in a Disney film. I also didn't personally mind Gurgi on my watch, which seems to be the most hated element. I think he's a rather enjoyable comic relief with a genuinely cool arc. Taran on the otherhand is genuinely THE worst lead in any Disney movie, haha.

Since I haven't seen many of these in a long time - I thought it would be fun to instead rank based on Nostalgia.

These are ranked not based on quality but based on how many times I would rewind the movies in the VCR. (I think Atlantis and Treasure Planet were the only DVDs on this list) 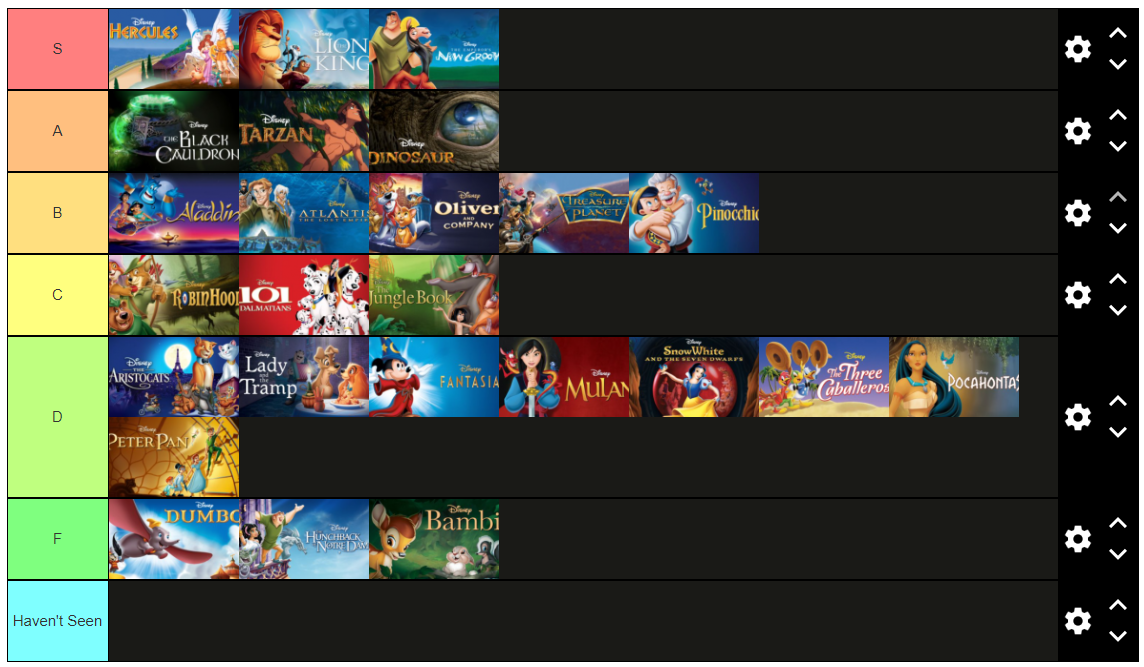 Sidenote - I didn't like Dumbo and Bambi as a kid because of the tragedies. Hunchback scared me as a kid but oddly enough Black Cauldron didn't

tcool123 said:
Just finished riding Guardians of the Galaxy Cosmic Rewind! It was an insanely fun ride and I just couldn’t help but smile through the entire ride. It didn’t feel intense whatsoever nor did it feel like a coaster honestly.


During the second preshow you’re standing in a room with four walls, and all of the sudden the wall disappears and out of nowhere we’re on a Nova spaceship above Earth. The reveal was honestly so cool, and one of the coolest effects Ive seen Imagineering pull off!
Click to expand...

EmFromPlanetEarth said:
Kinda wish never gonna give you up was one of the song choices it wlild have been a fun song for the ride and also kind of be a rickroll
Click to expand...

If that movie came out as disneys first cg movie it probably would have been received alot better. Chicken little is a fine movie and cna be funny but it’s definitely moreso one of those non disney animated movies that youd find in dollar store bargian bins

Chicken little and meet the Robinsons did both have amazing original songs at least. Another believer is really good

Excited for this as a fan of the other films, but this trailer didnt do much for me. I guess I just wanted to be hit with that OG Mission Impossible tune.

I don’t get why people hate Meet the Robinsons so much.

Honey Bee (Rebooted) said:
I don’t get why people hate Meet the Robinsons so much.
Click to expand...


Excited for this as a fan of the other films, but this trailer didnt do much for me. I guess I just wanted to be hit with that OG Mission Impossible tune.
Click to expand...

That's a decent trailer for something coming out in summer 2023

Honey Bee (Rebooted) said:
I don’t get why people hate Meet the Robinsons so much.
Click to expand...

Probably because it’s sandwiched between one - not bad but very cynical and annoying disney movie and a unapologetically bland and forgettable disney movie. I mean i think bolts alright but i cannot for the life of me remember much from the movie. it feels like an illumination movie. Also they cancelled fraidy cat which would have been awesome. A tribute to hitchcock thrillers starring a cat with frayed nerves

So much Bolt slander on these boards recently and I will not stand for it!

Bolt was my favorite movie for a very long time and while I haven’t watched it in ages, my blind nostalgia for it will completely keep it impervious from any and all harm when I finally reach it.

Oh hello!? Great Movie Ride Part II: The Remix? I do think! Remembering how season 1 was around when I first joined