Uni is going to need a cast member in each car to guard against vandalism. Look at how long the new portrait lasted in the BTMRR que.

Cosmic Commando said:
Hopefully, the information age will make it harder for a government to keep secrets from its people.
Click to expand...

lazyboy97o said:
This seems to be a favorite tactic. Claim some moral/intellectual superiority, yell about it and then put people on ignore.
Click to expand...

Usually when I see the "I don't have time to educate you" or "go back and forth with you," it generally means "I cannot put together a cohesive argument in support of my position, so I'm going to just act intellectually superior, take my ball, and go home."

That's usually when you know you are winner-winner chicken dinner.

MattM said:
Usually when I see the "I don't have time to educate you" or "go back and forth with you," it generally means "I cannot put together a cohesive argument in support of my position, so I'm going to just act intellectually superior, take my ball, and go home."

That's usually when you know you are winner-winner chicken dinner.
Click to expand...

In a very tepid defense of that tactic, I try to give folks a pretty wide berth when wading into a Disney-related site. Not to put too fine of a point on it but most such constructs aren't exactly populated by an overwhelming number of our brightest lights.

However, it's clear that a few notable posters in this thread seem to think that their inside access or long familiarity with the Walt Disney Company somehow furnishes them with innate intellectual capacities the rest of us sorely lack, allowing them to opine with authority on every topic under the sun.

I'm sure they would be shocked to find out that not everyone here is a mindless rube...and that more than a few would make them look like scampering clowns if we knew exactly who everyone here actually was.

WDW1974 said:
With one HUGE difference: that train actually takes you somewhere.

I don,t recall getting on the subs in Fantasyland and exiting in Vulcania.
Click to expand...

They could have let us off under the the icecap, but they couldn't get the door open so they had to return to port. Trains don't have that problem.

Captain Neo said:
LMAO this thug makes everyone in the current Walt Disney company look like an angel. He stole ideas from Nikola Tesla and then discredited him among other heinous deeds. He is the true spirit of american greed.
Click to expand...

You forgot the electrocution shows didn't you?

WDWDad13 said:
ya know its interesting... I had a conversation about this over lunch based on our employees at our company in our organization

this doesn't apply across the board but follow me here:
new school loves technology, change, and anything new
old school dislikes change and some new technology

new school likes innovation, changing up of attractions (even classic ones) to make more modern or even completely new
old school hates any change to a classic attraction and thinks most attractions should remain the same forever

for now...its going to be a struggle...complain all you want but it isn't going to change anything... also you don't have to use it if you don't want to
Click to expand...

You are so correct - next year still planning DVC stay but parks off the list, Too much other stuff to do in Central Florida without feeling like a felon on house arrest with every move tracked and mapped

you forgot this one which preceeds yours

In the beginning was the Plan.

And then came the Assumptions.
And the Assumptions were without form.
And darkness was upon the face of the Workers.
And they spoke among themselves, saying, "It is a crock of ----, and it stinketh."
And the workers went unto their Supervisors and said, "It is a pail of dung, and none may abide the odour thereof."
And the Supervisors went unto their Managers, saying, "It is a container of excrement, and it is very strong, such that none may abide by it."
And the Managers went unto their Directors, saying, "It is a vessel of fertiliser, and none may abide its strength."
And the Directors spoke amongst themselves, saying one to another, "It contains that which aids plant growth, and it is very strong."
And the Directors then went onto the Vice Presidents, saying unto them, "It promotes growth and is very powerful."
And the Vice Presidents went unto the President, saying unto him, "This new plan will actively promote the growth and vigour of the company; with powerful effects."

And the President looked upon the Plan, and saw that it was good.

MattM said:
Why are photographers generally so angry?
Click to expand...

Just a photo-hobbiest here but I think there is an undeniable drive to document all that is worthy of documentation. Be it a family gathering/vacation or real time news. It is this very drive that keeps the camera clicker from being 100% involved in said moments. This relentless internal order is the choice always taken.

Thus leading to what can be perceived as an all around angry persona.

Or I'm just angry and like to take pictures.
M

scout68 said:
Just a photo-hobbiest here but I think there is an undeniable drive to document all that is worthy of documentation. Be it a family gathering/vacation or real time news. It is this very drive that keeps the camera clicker from being 100% involved in said moments. This relentless internal order is the choice always taken.

Thus leading to what can be perceived as an all around angry persona.

Oh I was really just referring to a certain photographer 'round here.

I'm a wanna-be photographer, so I would have been myself. I'd never do that.

flynnibus said:
Same **** every credit card does... they isolate the customer from unauthorized charges.
Click to expand...

What about attraction, show and other reservations?

Funmeister said:
What about attraction, show and other reservations?
Click to expand...

I would hope (which with Disney may be asking too much) there is a system in place to remotely kill key cards and MagicBands with a new device being enabled as a replacement. Maybe @spacemt354 can tell us if they had to use the PIN to make or change FastPass+ reservations at Guest Services. But stealing somebody's MagicBand to go on their rides seems like a rather silly motivation for me. And since it is being tracked you'd potentially be able to tell where the person is or at the least where they are going.

WDW1974 said:
I don't see why they would be concerned. The shadow government gets revealed in the Snowden caper the same time WDW is planning whAT just 'may' be the biggest social behavioral experiment ...yeah, that's going to play well in both the Heartland and liberal coasts of the USA as well as those socialists in Europe. Nope, is that George Kalogridis huddled under his desk clutching plush? No...oh, it's Nick Franklin and Tom Staggs doing likewise.
Click to expand...

Our President now has "nudge czar" who will take aim at subtly changing our behavior and/or guiding our decisions through social experiments. Its not too far fetched to think WDW IS a testing ground for such a program. "This is full on collusion!"- Rodney Ruxin

note: this story is also on many major media websites i just thought this one was the best read. I cant stand the NY Slimes (Times), MSNBC, FOX, CNN etc. or other bought and paid for media so I chose this one.

ParentsOf4 said:
The consumer has a choice but needs information to make that choice.

As currently worded in its multipage “Terms and Conditions”, even we self-described WDW experts can only speculate about Disney’s ultimate intentions. What information is Disney collecting? What does Disney intend to do with that information? The fact that we can only speculate is in and of itself evidence that Disney’s current level of disclosure is.
Click to expand...


Well, if they outright lie on an official response to a Congressional Inquiry, how are we going to expect honesty on a T&C, even after consulting the Rosetta Stone to fully decifer it.

lazyboy97o said:
But stealing somebody's MagicBand to go on their rides seems like a rather silly motivation for me.
Click to expand...

Apologies again for the interruption. Enjoy. 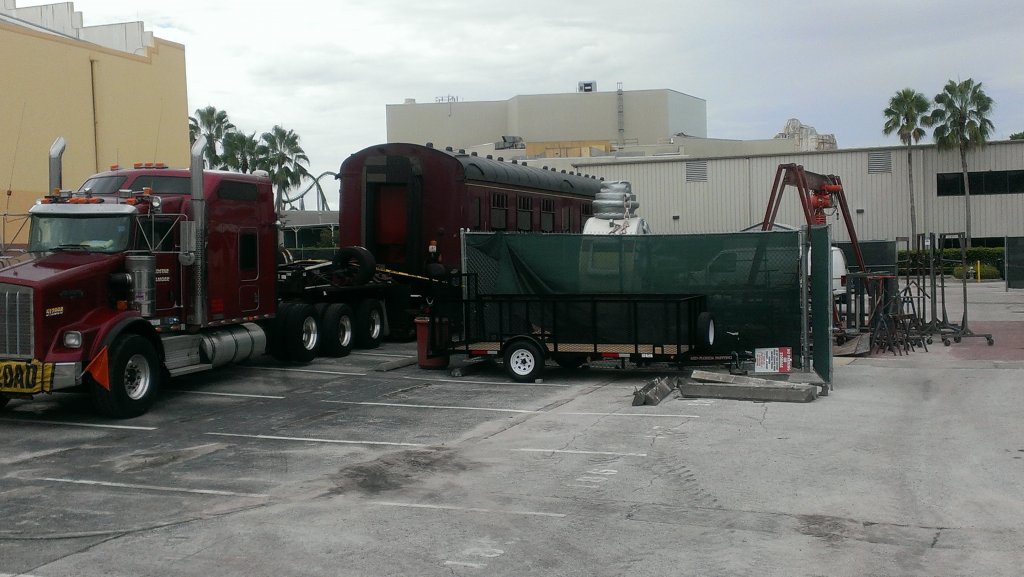 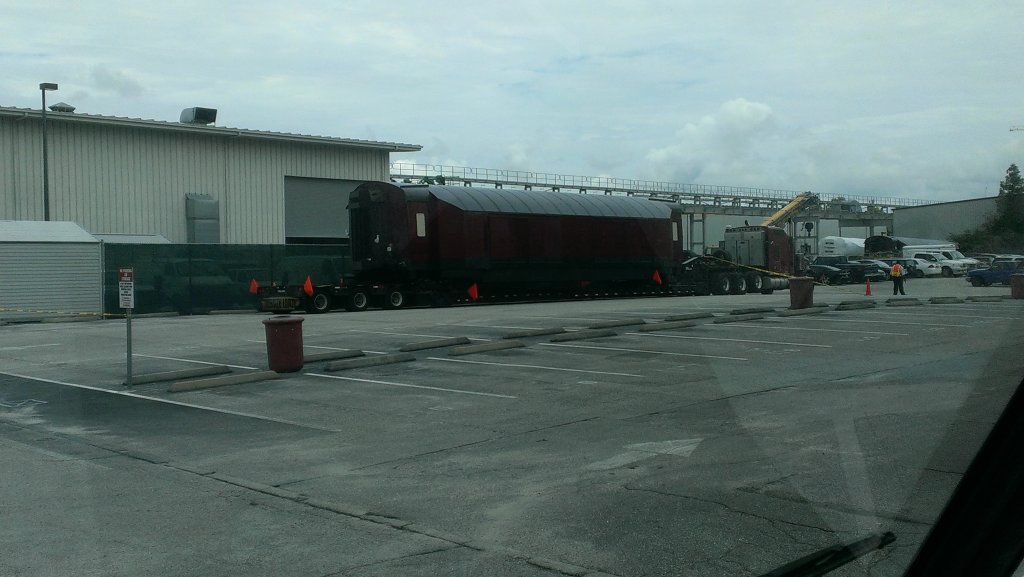 Whoa technical difficulties. Sorry. You guys get the point though.

Never, ever apologize for posting that!

WDW1974 said:
It's that last sentence, Dave. That's what this is all about. Disney is trading on that public trust or, perhaps, preying ...or maybe just betting.

Here is the thing though, they are violating that trust through this campaign of misinformation and obfuscation. But that's enough for one night.
Click to expand...


The Weatherman thinks the name 'Disney' entitles the company to unquestioned trust from the population, to those who want to go on a safe vacation with minor children in tow right up to those on Capitol Hill (another jist that I remember from the reponse to the official inquiry).

From what I could tell there are now 3 maybe 4 train cars back there now. I tried to get a shot of the windows, but it wasn't easy.