Premium Member
The past week- 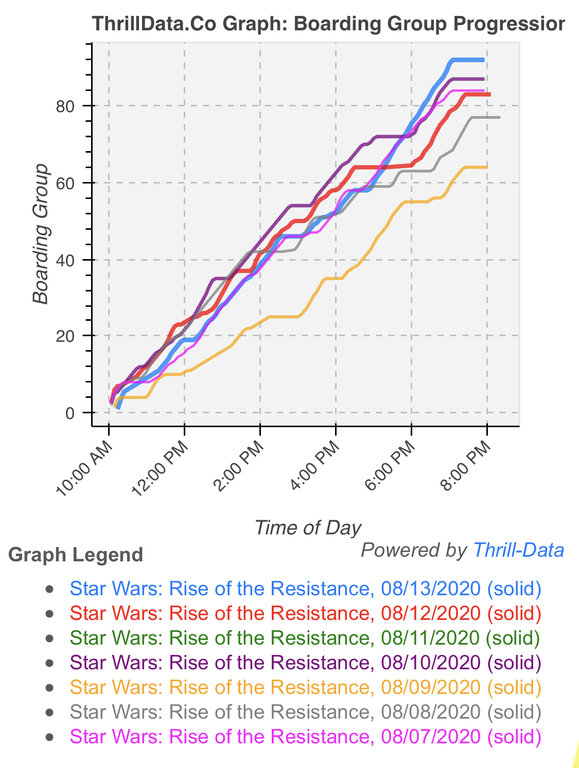 Filling in for the consistent DCBaker but no surprises:

Also, I watched a live stream w/Tom B this morning and ride was the full post COVID experience. Granted he was in one of the early BGs which is seemingly the best bet to get the complete ride.

Giss Neric said:
What are you talking about. The lack of immersion has already been a disgrace even with all elements working. Resistance and First Order officers are all wearing masks and face shields. You see hand sanitizing stations and plexiglass dividers in the freaking Star Destroyer. Of course I'm kidding but the whole overall immersion thing should not be a big deal anymore as long as the main ride is working (at the present time/situation of course).
Click to expand...

Haha! See to me, the immersion is just as good, if not better, than the ride itself. It all builds to the ride, especially for the first timers. The reveal of getting off the rebel ship into the First Order's hangar is a real jaw-dropping moment. To casually walk through a cast member entrance and suddenly be in there feels so fake, like walking through a movie set, whereas the real experience is actually being IN the world of the movies for real.
D

TriSeb said:
Filling in for the consistent DCBaker but no surprises:

Oops, posted the 10am one in the wrong thread - thanks!
D

Premium Member
2pm slots filled in ~12 seconds. Current groups called up to 35 (4 groups behind yesterday at this time).

DCBaker said:
Oops, posted the 10am one in the wrong thread - thanks!
Click to expand...

I was wondering where you were this morning to report
D

Premium Member
89 is the last group of the night, called around 7:15pm (3 groups less than yesterday).

Got a last minute PP for DHS tomorrow. 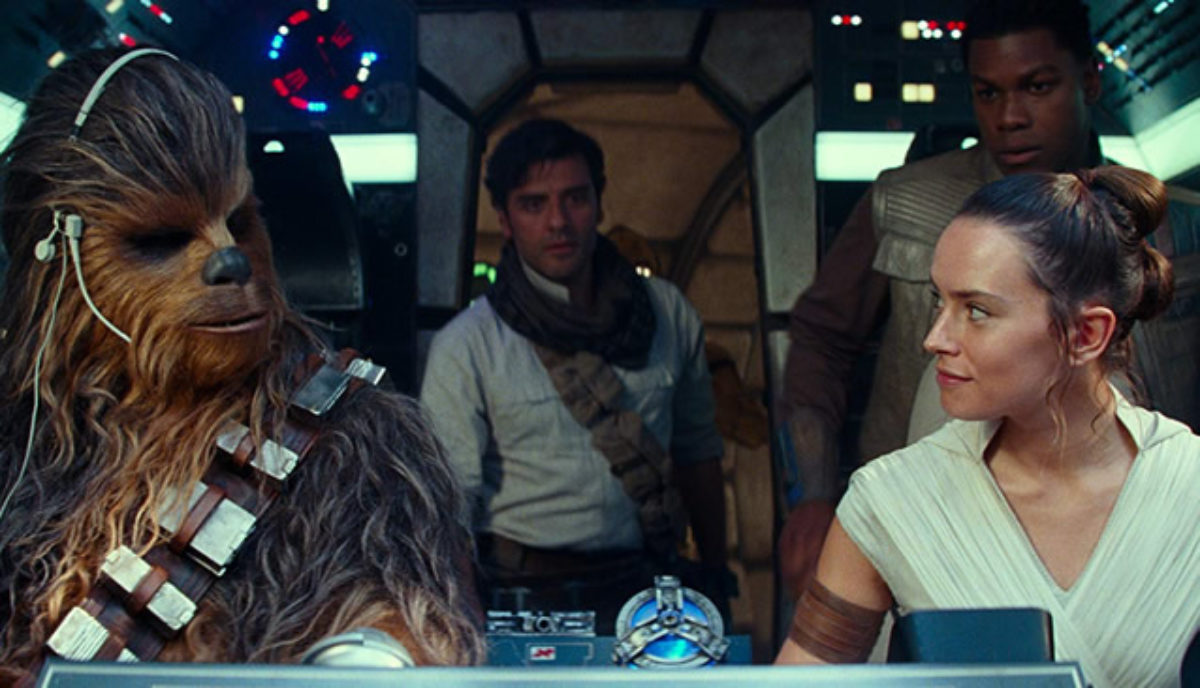 KevinPage said:
Got a last minute PP for DHS tomorrow.

tonymu said:
So... update to the trip and the second go around on Saturday 8/8. Just like the first time around I got all 24 family members up early, got our dedicated Disney bus just for the family dispatched quickly, and scanned into the park by 9:30. Checked with the GET team and was told that the app is updated every Wednesday and that the issue with all family members not showing up, as happened the first time, was believed to be fixed. This time all 24 family members were present so I would not have to "select all" and then deselect one. Then I counted down and when 10am struck I hit "Join", hit "select all" and the first 10 family members names got checked and then it took about 10 seconds for the the other 14 names to get checked. By then all the boarding groups were gone! I cannot tell you how gutting it is to tell 23 family members at 10:01 that the app glitched again and that we did not have boarding groups and would have to see what we could do at 2pm.

At 1pm I went and once again talked to a GET member, Erin, and explained my situation from the first day and from the morning. She was very nice and understood that it is impossible to get a boarding group for a large family with the app and told me I could select only myself to get a group and that she would add the rest of the family if I was successful. I went back finished lunch and told the other 23 family members to join me at the GET umbrella at 1:55 and I went back to get in line. I was first in line and was somewhat concerned that the Erin, the GET member I spoke with, was not there at the moment. As we got closer to 2pm more GET members appeared and I hoped she would re-appear before 2pm. Unfortunately she did not return.

At 2pm I selected myself and got a Boarding Group. I then explained to the GET member about my conversation with the Erin and what had happened on the attempts before. She said she could not add anyone else. I explained that I would not have done it if Erin had not told me to do so. Unfortunately, with 23 family members crowded around the GET member was not very friendly. As I tried to talk to her she got upset and handed me off to a supervisor. I explained the situation to him and he also was not very sympathetic. After 10 minutes of discussion he conceded that he could add 7 out of 23 other family members into the 1 attraction vehicle I had reserved with my boarding group. I then had a couple of family members react not very nicely and he threatened to not even do that. I got the other family members to go away and talked to the supervisor nicely again. I asked him how I was supposed to pick 8 family members to ride and tell the other 16 they could not experience one of Disney's most spectacular attractions again because the app can't operate fast enough for a large family in the 10 seconds needed to get a boarding group. He then punched on the tablet for 5 minutes to try and add the rest of the family and went back to talk to the GET member who handed us off to him. She looked at us across the way shook her head and frowned. He then came back and said there was no way to add the rest. I explained that we had it done 4 days before and he said they would remind all GET members to not do that. I then picked 6 of the kids and one brother who was not there the day we rode the first time and the supervisor added them. I had kids crying and not wanting to ride if the others couldn't, other adult family members ranting and making comments. It was not pleasant.

The boarding group was eventually called later. I had to force the kids to ride and gave my band to one of the other kids who I had not been able to select to ride. They grudgingly rode. The rest of the day was not pleasant and as it was our last day in the World the trip was ended on a very sad and unhappy way. It was a trip of a lifetime with a large part of the family, and who knows when and if we will ever make it back, but I guess at least I can say I got to ride once!
Click to expand...

There is a known random glitch that will be patched soon. Sadly that doesn’t help you, but the GET should have been more accommodating as a one off gesture.
D

Premium Member
10am slots filled in just under ~15 seconds.

Premium Member
I was panicking in that delay. Backed out and went back in 3 or 4 times till it finally populated join. 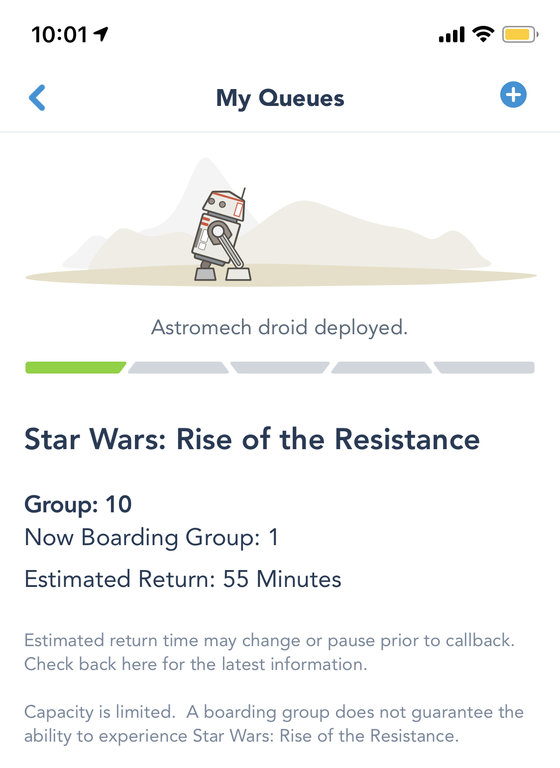 Premium Member
For any longtime readers of this thread, you might enjoy knowing that @KevinPage and I officially met and had a nice socially distanced 15 min chat at Baseline!

disneygeek90 said:
For any longtime readers of this thread, you might enjoy knowing that @KevinPage and I officially met and had a nice socially distanced 15 min chat at Baseline!

Who’s been on the most times?

disneygeek90 said:
For any longtime readers of this thread, you might enjoy knowing that @KevinPage and I officially met and had a nice socially distanced 15 min chat at Baseline!

(Let me know when you've been on FoP more than forty times! )

nickys said:
Who’s been on the most times?
Click to expand...

DCBaker said:
10am slots filled in just under ~15 seconds.

The window also opened about 15 seconds late.
Click to expand...

When the window is delayed in its opening what are the options in the park. Is there a way to tell / refresh?

RSoxNo1 said:
When the window is delayed in its opening what are the options in the park. Is there a way to tell / refresh?
Click to expand...

I was just backing out to the main screen and clicking join, repeating the process until “join” on the virtual queue page actually appeared. You could have also pulled down to refresh on the screen.

The only way to tell is because the join icon was not available at 10:00:00

His goal is to be able to honestly say he's ridden orders of magnitude more than anyone else.

(Let me know when you've been on FoP more than forty times! )
Click to expand...