Most Memorable Character Interaction For You?

Original Poster
I want to hear stories from your funniest or favorite character interaction in the parks! Which one is the most memorable moment for you and your family?

The first time we took our kids back in 2012, it was alllll about the princesses for our girls. They were super sweet and excited to meet the princesses, but nothing tops my son meeting his favorites- the Cars!!- when we went to our room at Art of Animation in 2016. My son has autism, and has been pretty much obsessed with Lightning McQueen and all things Cars since he was just a tiny baby. He continually watches all the movies, and he has so many of the toys I can't even keep up with which ones he has anymore.

When we planned our trip in 2016, we explained to our girls that we were going to stay at AoA for him, and by the time we were checking in, all of us were so excited to see his reaction we could hardly stand it. My mom went with us, and kept harping on the fact that the cabins at Fort Wilderness would have been a much better deal, but I told her "When you see the look on Sawyer's face, you will understand. It will be worth every penny." And it totally was....

We were put in the Mater building, so we moved our car down near the building and then proceeded to walk into Radiator Springs right next to Sarge's Surplus Hut. When my son was younger, he would do this thing when he was overwhelmed or overly excited where he would kinda squat and draw his hands in to kind of draw into himself and control his emotions. As soon as he saw the sign for Sarge's, he started saying "Cars! McQueen!" The moment he laid eyes on Sarge, and then immediately saw the cones of the Cozy Cone Motel (the pool!) he did his "thing". We had to coax him along, but the moment he saw Lightning McQueen and Sally and the Wheel Well Motel, he started jumping up and down and flapping his little hands with the biggest grin on his face. Once the initial excitement set in, he had to walk up to and hug and kiss each one of the cars. My husband and I, along with our girls, all cried at his excitement at meeting them. LOL I didn't get him kissing Lightning, because I was crying, but here he is just before he walked over and laid his head on Lightning McQueen's hood to "hug" him: 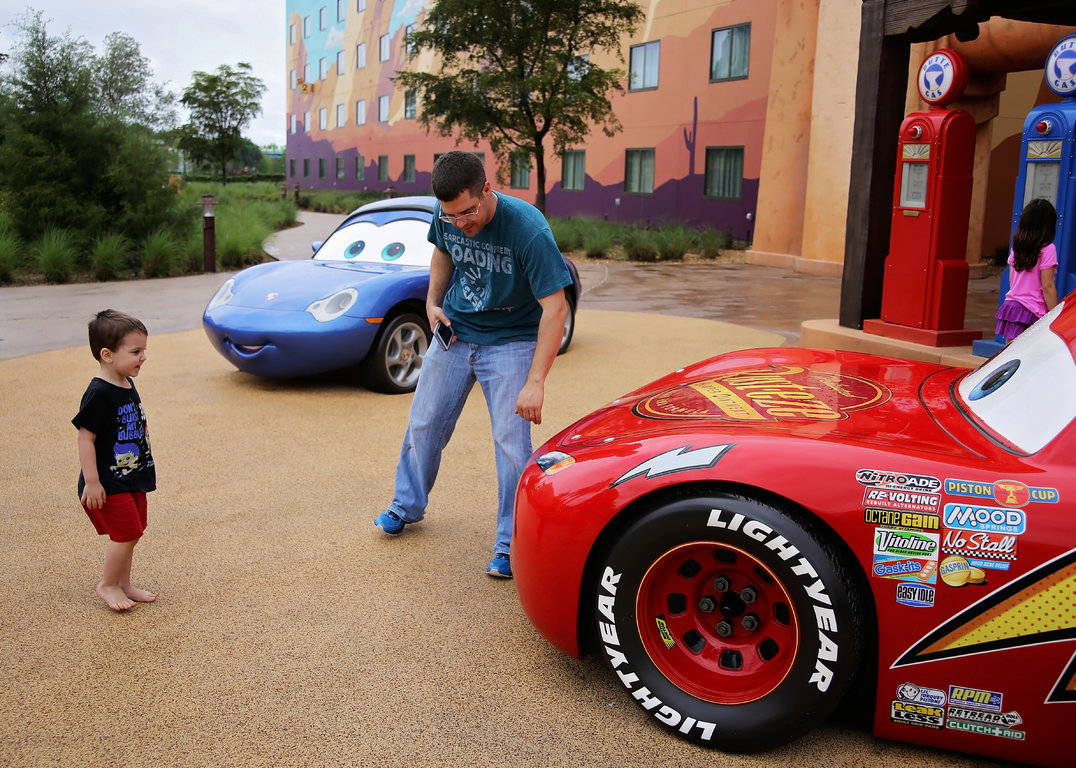 As my son walked around hugging and kissing the Cars, I asked my mom "So what do you think? Worth every penny?" She nodded, tears in her own eyes, and said "Absolutely. And then some!"

My ex and I took our daughter back in the late 90's. Characters roamed the parks at that point. We were at Hollywood Studios in the alley along ABC commissary. Anyway, here comes Belle, Snow White, and a host of other costumed characters and they sit down in the middle of the alley and start a game of Duck Duck Goose. All the kids got in on the game, and my youngin' was chasing a twirling snow white around the circle. It was incredibly sweet to see.

Last year, we took our 1 year old on his first trip and we met Sorcerer Mickey at Hollywood Studios. It was our first day in a park, and he obviously didn't understand what was going on, but the moment we put him down, he waddled straight into Mickey's arms and rested his head on Mickey's shoulder. I've always dreamed of what this moment would be like, way before we even had kids. It was a simple and sweet one, and more joyous than I could've ever imagined.

A few days later, we were the last to meet Mulan in China in Epcot before her break. He way shy, but complied. She followed us on our way out, stopping in front of the Temple of Heaven and engaged in a playful game of hide and seek with him. That was pretty memorable too.

I've told this story in other threads, but it bears repeating. On my 40th birthday I was in Epcot, all by myself. It had been a great day, and I stopped into Mouse Gears on the way out to do a little shopping. Goofy was there, playing with kids (grabbing a hat and running away, etc.). I was enjoying this while standing next to Goofy's handler, and I mentioned to her that it was my birthday and it had been a really good day. Next thing I knew, Goofy had taken me by the hand and made me stand up on a bench while the handler was saying "It's Dan's birthday, and we all need to sing Happy Birthday to him". So I stood on the bench while Goofy led the crowd in a rousing round of Happy Birthday. It was just the perfect end to a great day!

Our kids are grown, so our memorable moments are now more of the grown-up variety. We really enjoy interacting with our favorite characters.

For me, it's Goofy. I have a classic Goofy ball cap from the 90's (has the teeth on the bill, long droopy ears on the sides) that I always wear. I look for Goofy everywhere I go to get a picture with him. It's especially fun to do poses with him. Last year for Halloween at MK I dressed up as Goofy. I had a blast posing with Goofy while in costume.

My wife is a huge Fairy Godmother fan. It is so hard to find her by the castle, but when we do, she loves to chat. Last year my wife made a Fairy Godmother costume and wore it for Halloween at MK. It was a huge effort to set up the meet (Character Locator was critical to our success), but my wife did get a picture with the real Fairy Godmother, along with some not-so-nice (in character and for fun) comments from the ugly step-sisters.

Our granddaughter was 3 1/2 years old on this trip. We were visiting with Lady Tremaine and the stepdaughters Anastasia and Drisella. One of them told the granddaughter a "story" to which she replied "I have a story too!" Both Anastasia and Drisella got down on the ground with her so she could tell them her story.
The most amazing thing that happened though was five days later when we were watching the afternoon parade and as Lady Tremaine, and the stepdaughters were passing by they spotted my granddaughter (having flame red hair helps with that ). Anastasia and Drisella came running over, gave her a hug, and said "Little Red! We didn't know we would get to see you again!" Even though she was only 3 1/2 years old she still remembers that at age 11.

We met Gaston on a trip in 2016. We returned in 2017 with friends - more than a full year later - and Gaston not only remembered who we were, but remembered the joke he used on us over a year before. No one remembers quite like Gaston!

I have two. For me personally, Launchpad McQuack. He was over the top, hilarious, danced with my wife, just so memorable. I also saw Chip interacting with a small child early one morning near City Hall in Disneyland. He was on the ground sitting and reading her book with her. Crowd was low and Mickey was drawing a bunch of people, so Chip was able to make the interaction last quite awhile. It was so sweet.

I celebrated my 21st birthday at Magic Kingdom and honestly, I was struggling with growing up. I knew only one person was the leading expert on growing up, so I tracked down peter pan for advice. I still remember his words "your age is only your two numbers added together". It might sound a bit silly, but I'll always remember it. 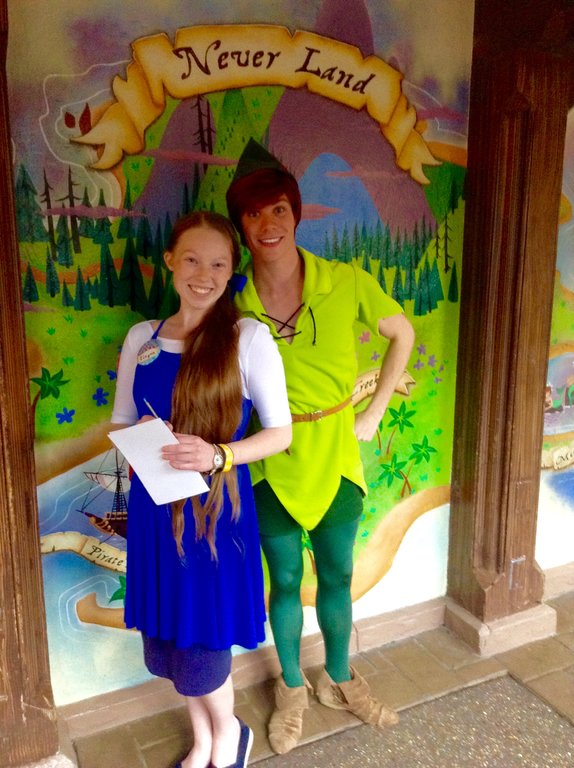 I have so many but, to list a few:

1. My youngest is obsessed with Stitch. When we were there in March, my oldest, my youngest and myself all had on Stitch shirts (I also have a Stitch tattoo on my foot) my husband was wearing nothing Stitch related so Stitch kicked him out. It was so funny. Eventually Stitch let him come back and gave him a sticker.

2. On our very first trip to Disney World, my husband was wearing a Timon shirt that says "I speak Fluent Sarcasm" when the kids went up to meet Timon and he saw my DH's shirt, he became so animated and was so over excited about someone wearing his shirt. He shook my husbands hand, hugged him and interacted with him and the girls for way longer than normal.

3. The look on both of my girls' faces when they met Elsa and Anna for the first time. I will never forget it!

Meeting R2D2 in Hong Kong Disneyland last year. I might have been 44 but it took me back to being 4, a lifelong dream come true
L

Just watching my kids when they were very young being so happy to see Mickey or Winnie. Makes me tear up a bit just recalling all those memories. Pure joy.

Anytime I meet Tigger, I get so happy and excited

My most memorable character experience happened in Disneyland. The Evil Queen to be exact. This particular performer became viral because of her spot-on characteristics. Actually, Disneyland characters are superior to Disney World in my opinion. Anyways, Evil Queen called me a peasant twice and I was so honored.

This is her by the way.

I was with my mom, wife and daughter watching Rivers of Light, and we swung through Dinoland afterward. There was a dance party, and my 3 y.o. joined in. There was a break, and they announced that Donald was coming. She ran over, grabbed his hand and "encouraged" him to dance with her. Unbridled joy - both for her and for me.

My most memorable experience with a character was at Disneyland in California. My daughter was 5 at the time, and we spent 3 days together at the park. On day one I took her to see Ariel. She told Ariel about how we had reservations for the next day at a princess breakfast at California Adventure. The next day, as we were waiting in the line to see Ariel and enter the restaurant, Ariel recognized my daughter and called out to her by name in front of everyone. She later gave us extra private time for taking photos, and the next day she arranged for a quick private meeting with my daughter at the Princess Fantasy Faire.
I know that the princesses see thousands of girls every day, so for her to recognize my daughter, and remember her name the next day was pretty cool. All the extra personal time was amazing.
I've since become aquainted with Ariel's "friend" via social media, and we have kept in touch. She's enjoyed watching my daughter, now 17, grow all these years.

We were in Disneyland a couple years ago and stopped on Main Street to have our picture taken with the Queen of Hearts and the Marh Hare. The CM was having a problem working our camera which led to this... 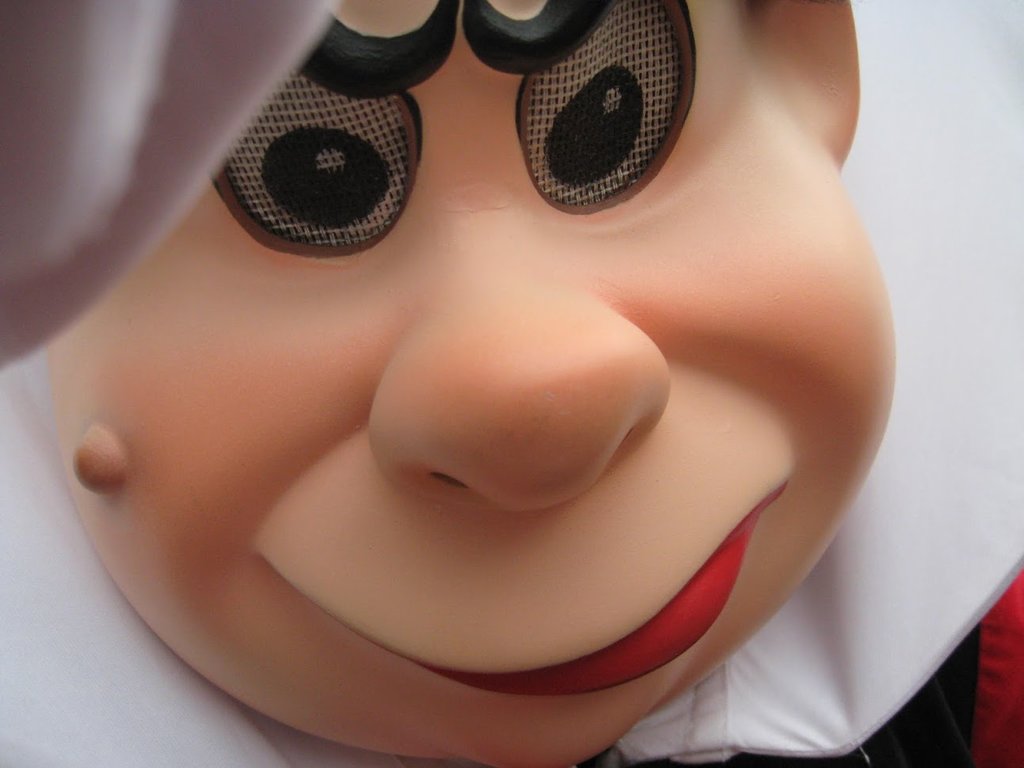 danlb_2000 said:
We were in Disneyland a couple years ago and stopped on Main Street to have our picture taken with the Queen of Hearts and the Marh Hare. The CM was having a problem working our camera which led to this...