I would assume the prince's castle because I couldn't imagine a dark evil villain's castle would be a welcoming sight for children as they walk into the park.

Original Poster
What a perfect choice of icon! Snow White's Castle would be amazing. I'm going to agree with KarnivalKid, we should definitely go with the prince's castle, not the queen's.

MEW I see your a whovian lol.

Here's my input as an Aussie citizen...

Instead of Main Street USA how about recreating one of the early century Australian mining towns? Here's some images of a museum/amusement park we have called Sovereign Hill for reference. 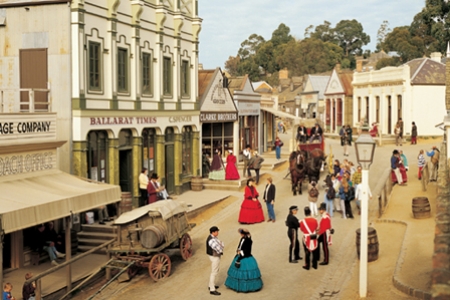 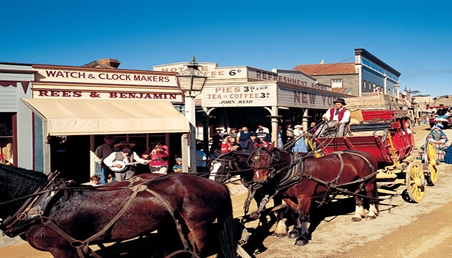 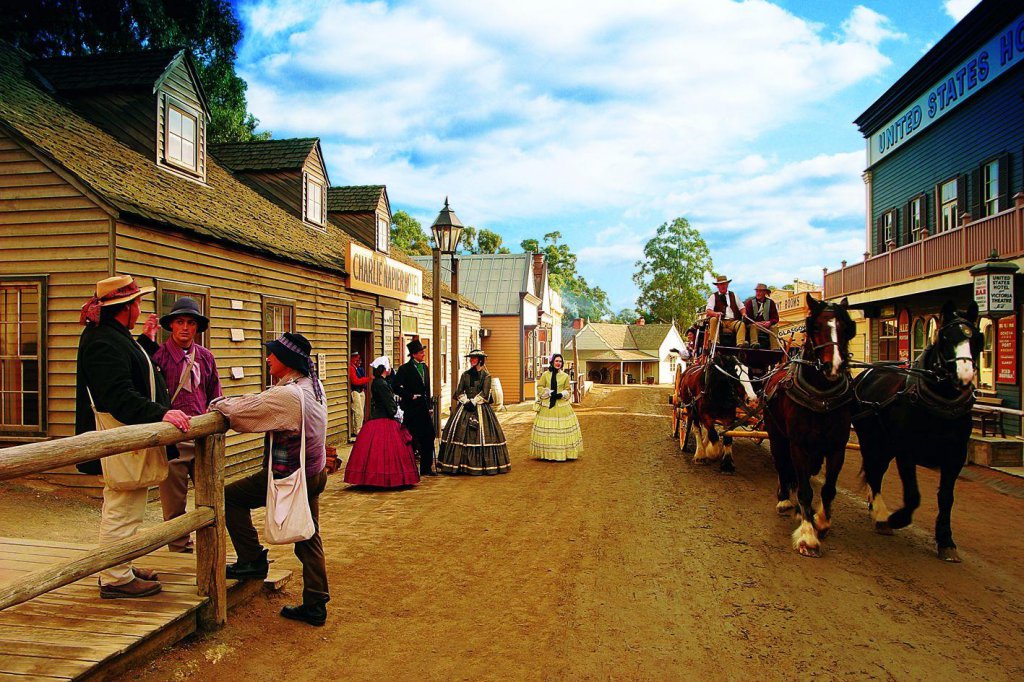 Also keep in mind that Australians are big on thrill rides. The typical Big Thunder Mountain just doesn't cut it for us, not even the children. So if your main audience is going to be locals you may want to consider upsizing some of the attractions (Indiana Jones Adventure is a good level of thrill).

WED99 said:
Here's my input as an Aussie citizen...

Instead of Main Street USA how about recreating one of the early century Australian mining towns? Here's some images of a museum/amusement park we have called Sovereign Hill for reference.

Also keep in mind that Australians are big on thrill rides. The typical Big Thunder Mountain just doesn't cut it for us, not even the children. So if your main audience is going to be locals you may want to consider upsizing some of the attractions (Indiana Jones Adventure is a good level of thrill).
Click to expand...

That could fit well in Frontierland.

Are we still gonna have a Country Bear Jamboree?

Original Poster
What makes you think I'm a Whovian? I've never seen an episode in my life, haha.

Thank you for your input, WED99! I for one am loving the idea of an Australian Main Street. It does kind of look like a Frontierland more than a Main Street, but that shouldn't matter, we can make Main Street and Frontierland neighbors, having the Australian mining town represent Australia's history, and Frontierland represent the romanticized American West, complete with bandits, cowboys, showgirls, Native Americans, pioneers, and Country Bears.

You also heard what he said, we need to up the thrill on the rides? Looping Big Thunder Mountain? That could be a start. I'm picturing the loop built into a natural rock archway in addition to launching backwards and forwards with a climactic final drop, a la Hong Kong's Big Grizzly Mountain. Seven Dwarfs' Mine Train and the Pink Elephants on Parade coaster would serve as the tame but still thrilling alternatives to those who don't wish for too much thrill in their coaster.

Original Poster
So, just a quick roundup of what we have so far...

Australian Main Street: Themed to early Australian mining towns, making it a thematic neighbor to Frontierland.
Snow White's Castle: We never really dove further into what should go inside the castle? A walkthrough? The Happily Ever After boat ride? WHAT?! I don't think Scary Adventures should go inside as we already have the mine train.
Fantasyland: Fantasyland is divided into several sub-areas, Storybook Village, Enchanted Forest, Arendelle, Small World Plaza, Dark Forest, and Dumbo's Circus. Dumbo's Circus is currently the most fleshed out of the sub-areas, featuring Dumbo, Mickey's Madcap Circus, Casey Jr. (featuring scenery), and a Pink Elephants coaster.
Other Lands: Other lands we have so far are Frontierland, Adventureland, Hollywoodland, Toon Town, and Tomorrowland. I think we should at least put in one more land of our own design.
Extremely Thrilling Thrill Rides: As WED99 said, standard Disney thrill rides aren't gonna cut it in Australia, we need to go bigger and better, hence the suggested looping Big Thunder. Other thrill rides we could potentially use: Tower of Terror, dueling Space Mountain (one track inverted, the other standard), Dragon Tower coaster, etc.

This brings me to Hollywoodland which will potentially lie northwest of the hub, perhaps utilizing Toon Town as a border between itself and Fantasyland with Tomorrowland to the south (the side of Space Mountain facing the land could be given fake grass and given the "Hollywoodland" sign). Remember my idea for tying the Haunted Mansion and Tower of Terror together by utilizing Master Gracey and his runaway bride? Well, we can do the same for Hollywoodland, nixing the usual Twilight Zone backstory and redesigning the tower itself to match the Mansion...here's a potential Hollywodland roster...

Maybe, since we're planning on changing up Pirates and Big Thunder, we could change up some Adventureland rides as well? We've tossed around the idea of a raft ride version of the Jungle Cruise.

Because I thought you posted a pic of David tennant as the Doctor. Btw in Australia Doctor Who is very popular so I thought a dark ride/motion simulator based off the Doctor Who series could fit in Tomorrowland due to its popularity in Australia.

Original Poster
Maybe in Hollywoodland as a special effects show, but not as an attraction in Tomorrowland.

I'm still not particularly the biggest fan of making the Jungle Cruise a river rapids ride...maybe making it more thrilling in the sense of Universal's extinct Jaws ride, but not necessarily a rapids ride with drops and whitewater. What if, this is really odd, we turned the Great Movie Ride into a river rapids ride? Hear me out, this is bizarre. Essentially, I'm envisioning riders boarding large film reels and careening through scenes from classic cinema. The ride naturally starts off slow but becomes thrilling midway. It's an odd idea, but it could work so well if done right.

Not to get off track (since we were working on Fantasyland), here's a potential roster for Adventureland.

1. Jungle River Cruise: A more special effect and false danger induced take on the classic, complete with an on board soundtrack and special nighttime cruise, a la Tokyo Disneyland.
2. The Excavator: A mine cart coaster through some kind of archaeological dig. We could do the dinosaur route as the ride was originally intended for Animal Kingdom, or we can appropriately tie into the ancient temple theme and have a more immersive take on Indiana Jones and the Temple of Peril/Raging Spirits.
3. Indiana Jones & the Lost Expedition: I'm thinking we expand upon the EMV concept and make something truly spectacular. Perhaps a multi-terrain vehicle? Aka, the jeeps suddenly get submerged in water. I don't know.
4. Pirates of the Caribbean: We've already determined making it the park's Splash Mountain. Why not have the largest flume drop in the world at the ride's climax?
5. Neverland: Okay, this is a long shot, but if Disneyland Paris can do it, so can we. As it is, we don't have anything remotely Peter Pan in Fantasyland, so wouldn't it be legit to have a Neverland sub-area of Adventureland? Especially if we have Adventureland and Fantasyland act as neighbors. Neverland would act as an interactive playground of sorts, complete with Skull Rock, the Jolly Roger, an aquarium in the belly of the Crocodile, the Lost Boys' Treehouse, a treasure playground, a Mermaid Lagoon, and Pixie Hollow meet n greet.
6. Peter Pan E-Ticket: An E-Ticket. Enough said.
7. Enchanted Passageway: A walkthrough featuring dioramas of scenes from Disney's jungle-themed films.
8. Sindbad's Storybook Journey
9. Genie-themed Show
10. Disneyland Australia Railroad

Obviously, our park is going to be HUGE. Look at the sheer amount of attractions in each land! Fantasyland alone has 24, Adventureland potentially has 10, and we haven't even looked at the others yet.

Also, another idea that just hit me...what if we combine the Country Bear Jamboree with America Sings, especially since we don't have a Splash Mountain. Imagine all the frontier critters joining in on a huge music revue! I can pen a script if you're interested.

A attraction would make sense using the 3D projections screens, and animatronics for the Cybermen, and Daleks along with a projection of the Doctor which would randomly switch between David Tennant, Matt Smith, and Peter Capaldi. Would Jungle River Cruise become Jingle River Cruise during the holidays?

Original Poster
But Tomorrowland is set in the future, I just don't see Dr. Who fitting in with the rest of the theme.

Yes, most likely Jingle River Cruise would be a thing.

It could because in the Doctor Who series the tardis could travel through time and space heck a few episodes from classic who, and new who are set in the future as well.

For the Snow White Castle i would like a walkthrough similair to the Castle Mystery Tour from Tokyo, but with different technology and some different villains.

also are we still doing Mystic Seas and Spaceport 55?

I like the Country Bears and America Sings combination idea! I'm really interested in seeing a script.

Original Poster
Nah, we kind of gradually nixed those, hence why Sindbad and Pirates seeped their way into Adventureland. For Tomorrowland, we can always divide it into two sub-lands - Innovation Plaza and Sci-Fi City, one themed to science fact and the other themed to science fiction.

Well, we can do a Mystery Tour, but we should have the entrance be located in the Dark Forest sub-area, meaning it'd be nestled in the side of a castle, perhaps on the other side of the dark rides in Storybook Village.

I really liked the Spaceport 55 idea. It was a great way to have classic Tomorrowland as well as what it is today.

Original Poster
Well, I suppose we can add it back in, as it is, our park is progressively getting larger. So, would it be something like this format...

I put Mystic Seas back in for the sake of theming...I just realized how well Neverland would fit in with the rest of Mystic Seas, so add in Pirates, Sindbad, Little Mermaid (probably the suspended dark ride, not the ominmover), and you have a truly special land. Mystic Seas would also be a perfect transition to the Dark Forest area of Fantasyland, using Dragon Tower as a backdrop.