It has been a few years since that first ride and season that saw this competition born out of a love for the since closed attraction and movies in general. After that hiatus, and now with 2 hosts, we look forward to taking you on another Imagineering journey into the movies!

While Season 1 saw a heavy focus on Walt Disney World and bringing a host of unique ideas to the parks in the form of Progress City Resort, Dream Mountain, Henson’s Revue, Pankot Palace, The PeopleLodger, The Goblin Kingdom, and many more. Season 2 will take this show on the road. With various “filming locations” all over the globe, we’ll spend 1-2 weeks in each, exploring a variety of parks (don't worry, plenty of Disney stuff!) with locally filmed movies providing a backdrop and some inspiration for the challenges themselves.

As with Season 1, the competition will be a team-based affair from beginning to end. Studio versus Studio will battle it out in a whirlwind of a season’s long shooting schedule. Disney, Universal, coasters, dark rides, new parks, hotels and new adventures along the way highlight just a glimpse of what you can expect on this journey. There is a wide variety of challenges that will need each of you to showcase your expertise and passions at one point or another.

There are no planned eliminations for the entirety of the season. We want you to continue to grow, bond and build with your team/studio as the season goes on, and at the end, share in the successes. Speak up. Brainstorm. Share those ideas, no matter how good or bad you think they may be. Season 1 had a large number of blockbuster projects thanks to the willingness of the studios and participants to really go for it. Many of the best projects on this forum have come about not from the first idea, but that first idea that sparked another.

All that being said, the hosts may take into consideration possible one-off eliminations if deemed warranted due to lack of activity, communication or commitment to the team. We all have busy lives at one time or another, but do your best to be present, share your thoughts, and take on larger roles in projects as frequently as possible. If you need a break for a week, keep your team in the loop, stay connected, and finish strong the rest of the season as your team will need you to make it through up to the finale.

One of the unique features that will return from Season 1 is the scoring system. Instead of the standard winning/losing studio team each week, a designated point system rewards various components of the projects, similar to the awards given out by the Academy, SAG, etc. Points for Best Picture (Overall Project), Cinematography (Presentation) and Art Direction (original artwork, designs, logos, etc.) will be the core of the tally each week, with additional awards created for your unique talents that get brought to each project (Ex: @that90skid Best Music Award from Pankot Palace).

It’s entirely possible your studio will achieve a clean sweep of the awards in a given challenge, but Season 1 saw many weeks of mixed awards leading to a nailbiter of a points battle down to the final challenge. Best Picture will represent the best overall project for the week, but these additional awards are meant to highlight your achievements and contributions, and encourage you to bring those talents (old and new), to each filming location and scene throughout the season.

With all of that out of the way, thank you again for taking this journey with us. Enjoy the movies, the challenges, your teams and the Imagineering. We’ll see you at the movies!​

Original Poster
Keep an eye out here for Studio team announcements as we prepare to kick off this Wednesday, May 25th, but there's still plenty of time to sign up!

Challenge details, updates and more will be here for you all season, along with this serving as the location for your completed projects and "films".​

I'm ready for this. Hopefully I can do Roger Rabbit attractions or other Disney ride / Universal attraction project.

….are you ready for it 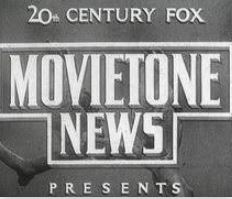 BREAKING NEWS OUT OF HOLLYWOOD

Welcome Studios, to Season II of The Great Movie Ride. Your Studios have been formed and get ready to film your hearts out all summer long on this journey. "Green Rooms" will be set up for you to get acquainted and the opening "shot" assignment handed out tomorrow! 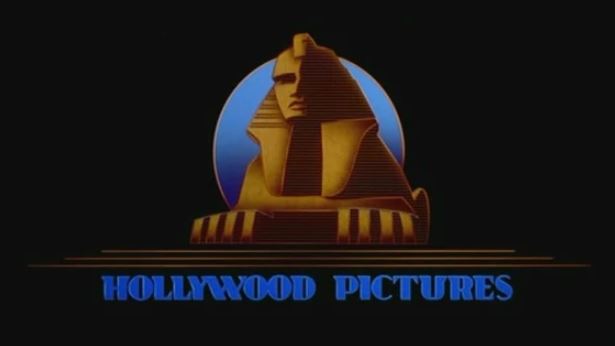 Original Poster
Scene 1 is coming shortly. As will be the case all season long, don't hesitate to reach out to @D Hulk and myself if you need anything, have questions, etc. Enjoy!

Legend of the Sorcerer’s Apprentice

Design an expansion for Hong Kong Disneyland’s Dark Kingdom
You can check out all the ins and outs of the park here. 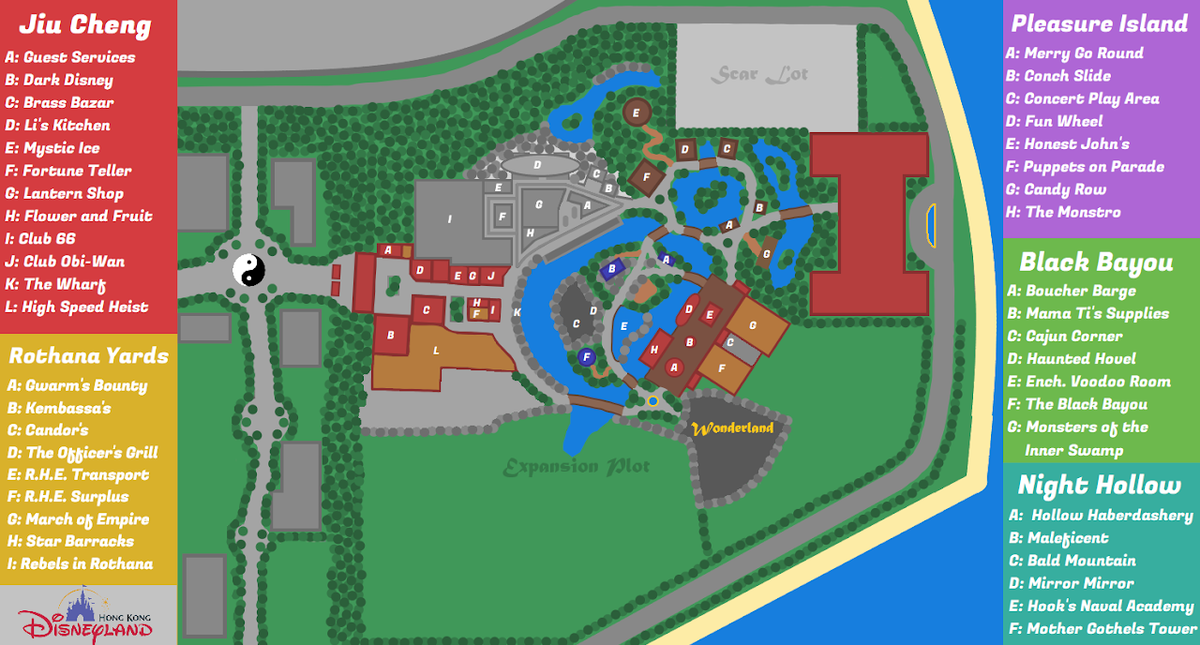 Disney’s Dark Kingdom expansion plot is yours to expand the park in any manner you so choose. Keep in mind what’s there, what isn’t, and how your expansion makes sense to continue on the vision for this fantastic villains' park.

We’ve given you a bit of extra time for this project to get your Studio machine humming and to be able to fully flesh out your ideas. Time is money and in the studio game, you need to make every shot count.

That video though - so impressive!

Original Poster
Happy to confirm that both @Chaos Cat and @Outbound are officially signed on as guest judges for the season. We have a few other special guests that will be popping in as well during various scenes to check out your great projects and rate your "films".

Reading through the PMs, I can already tell that we're going to see some high page counts from both teams.

Dark Kingdom was the crown jewel of SA5 so I;'m glad it's getting some focus.

Original Poster
Good afternoon Studios. Just a friendly reminder that filming of your scenes should be completed by a week from today. Still plenty of time to get things done, and you both seem well on your way. Make every shot count!

Was curious to look back at the other finalist park from this season - it was another gem by @James G. and company (@Evilgidgit @FireMountain @NateD1226 and @Pi on my Cake ) 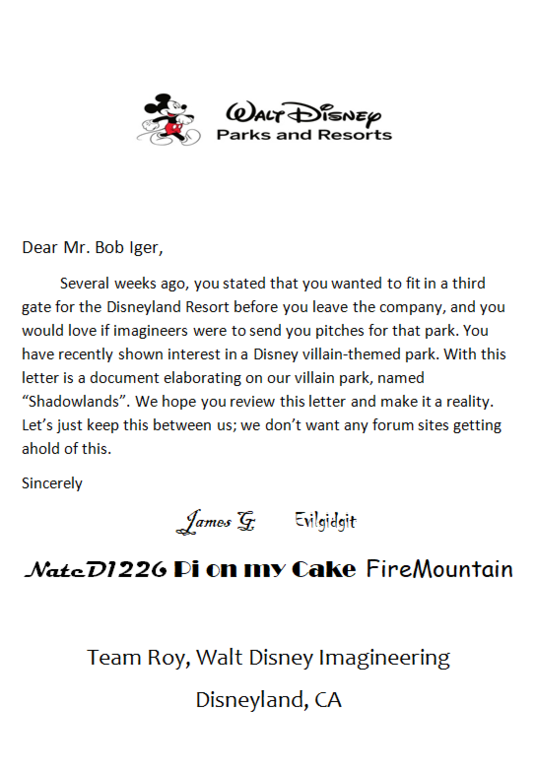 Uhhhhh oh gee oh golly oh gosh I have been completely in the dark here.

I hope everybody here the best and loads of fun, I'll see you all around elsewhere!

I hope everybody here the best and loads of fun, I'll see you all around elsewhere!
Click to expand...

For what it's worth - there are no eliminations. You can just come back to your team after finals.

I hope everybody here the best and loads of fun, I'll see you all around elsewhere!
Click to expand...

If you are able to jump in after finals we'd love to have you. We kept the teams fairly large to account for finals, summer vacations, etc. and there will be plenty of weeks left after this first scene or two. Just let us know, or pop into the team brainstorming to say hi, and confirm when you think you'll be free. Next 2 scenes will be running June 5-11 and June 12-18

Sorry just to clarify again is this due tomorrow night or is this Saturday night?

spacemt354 said:
Sorry just to clarify again is this due tomorrow night or is this Saturday night?
Click to expand...

Saturday night. Sorry for any confusion. I'll update the next round to 11:59pm.

We've got all rounds set up to be due Sat evening, except the finale, and we plan to get reviews, results and the next challenge out on Sundays as early as possible in the day to give any extra hours we can to that weeks' challenge

Original Poster
Since we are super early in this competition, I thought it would be a great time to dust off The Imagineering Workshop thread if you are looking for tips, tools and helpful advice to flesh out your presentations, artwork and overall Imagineering skills. So many great, and free tools out there that are fun to play around with and little things that go a long way in bringing your creations to life.

Another that I came across recently, and I'll add to that thread is Lunapic. https://www3.lunapic.com/editor/?action=quick-upload
Very simple online tool that lets you draw, enhance or color in your own pen/pencil drawings. I haven't drawn in bit and usually use another program, but this has a nice, simple interface and one of the many free tools on the webs.