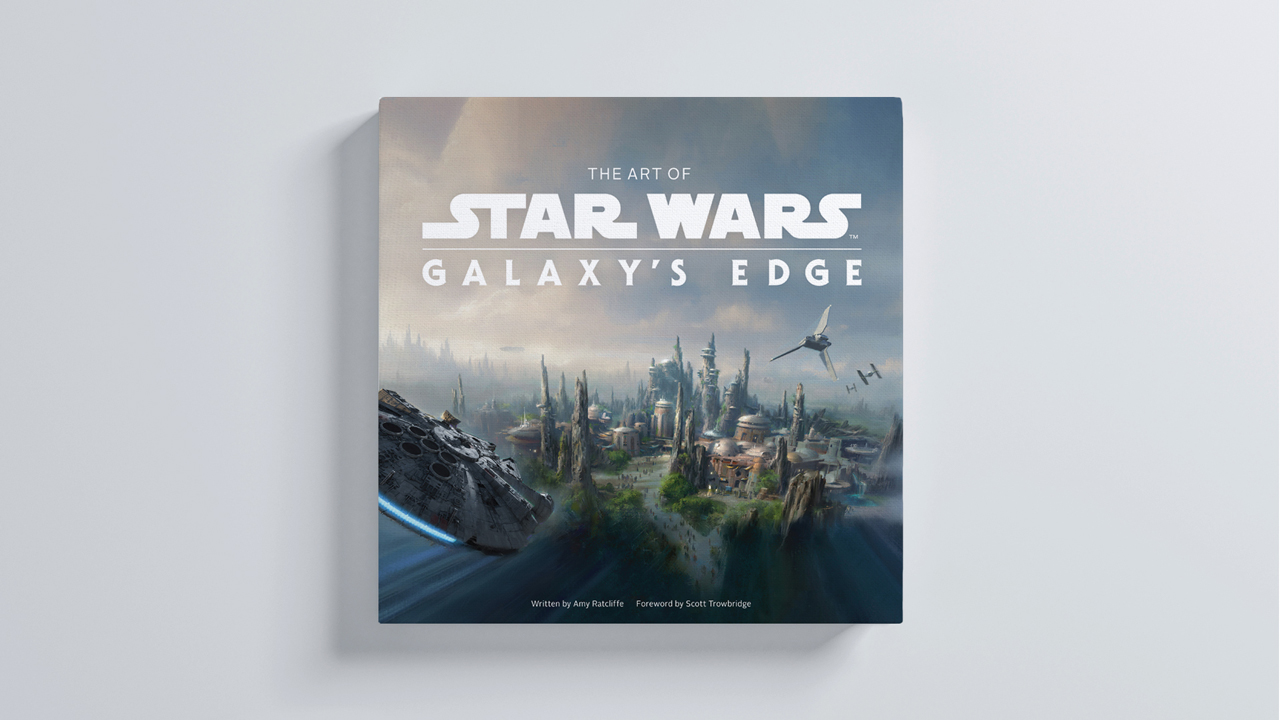 All of the pages simply say: "Money."

Premium Member
...on advice of counsel, I choose not to incriminate myself

Buying a book nine months in advance... Either I am getting too old or people are going crazy... And I'm only 39

I'd rather have an art book of all the ideas that got cut from the final product. Before and after Disneyland plans gutted the DHS version.
C

AshaNeOmah said:
I'd rather have an art book of all the ideas that got cut from the final product. Before and after Disneyland plans gutted the DHS version.
Click to expand...

Yep. The only way this book is worthwhile is to see all the various iterations beforehand. The plans from when the land was in alternate sites. The (I'm guessing) many, many blue sky attraction concepts. Numerous versions of various layouts. Showscenes that got rejected. Ride layouts that got simplified. Et cetera and et cetera. I'm not really interested in seeing things that are close to what we currently got.

choco choco said:
Yep. The only way this book is worthwhile is to see all the various iterations beforehand. The plans from when the land was in alternate sites. The (I'm guessing) many, many blue sky attraction concepts. Numerous versions of various layouts. Showscenes that got rejected. Ride layouts that got simplified. Et cetera and et cetera. I'm not really interested in seeing things that are close to what we currently got.
Click to expand...

It's not the kind of book I would pre-order either. It's one I would have to pick up and leaf through to decide whether I would want to buy it. So as you said, things like concept art (including Tatootine and OT era) and plans for alternate sites would be interesting to see. So I'll just wait until I see it at a Disney gift shop or a bookstore.
D

Premium Member
New article in the Orlando Sentinel about the book -

"A new book provides insight and illustrations concerning the making of Star Wars: Galaxy’s Edge, the land that Disney created from scratch at theme parks on both coasts.

Trowbridge says he was given one overarching goal for Galaxy’s Edge from Bob Iger, then CEO of Walt Disney Co.: “Be ambitious.”

“They went huge. They really blue-skyed,” Ratcliffe said. “Of course, that’s something Imagineering does, regardless of their project. But with Galaxy’s Edge, they had that piece as a collaboration with Lucasfilm and those artists are used to designing for the film world.”
She talked with more than 20 people attached to the making of Galaxy’s Edge and had access to thousands of records from Lucasfilm.

“When I looked at this digital pile of art, that’s kind of what directed what I wanted to talk about,” she said. “I knew from my many visits, to Galaxy’s Edge, kind of how I wanted to split up the book into chapters with different areas.” Those chapters include “Stand With the Resistance,” “A Refined Collector,” “Batuuan Fashion” and more.

Ratcliffe, a one-time cast member and former Disneyland annual passholder, also is the author of “Star Wars: Women of the Galaxy” and “The Jedi Mind.” Her affection for “Star Wars” and theme parks extends to the point of her tattoos.

“I have the Disneyland classic D, and then I have an X-wing tattoo and a Rebel Alliance tattoo and a quote from ‘Solo: A Star Wars Story,’ ” Ratcliffe said. “I definitely did feel like Batuu was in my bones.”

Her book, which comes out April 27, has a coffee-table book vibe because of the large artwork. But there are more gems and details in the text, including some of the physical and creative challenges in forming Star Wars: Rise of the Resistance and Millennium Falcon: Smugglers Run, the land’s two major attractions.

The book cites plenty of influences on the land’s look, including 18th-century Italian artists and 19th-century French Orientalist paintings. The team made trips to the Lucasfilm archives and four “Star Wars” film sets as well as Morocco, Turkey and Greece for inspiration. The book showcases sketches, paintings and other concept art for the spires, domes and droids now in existence in the parks. There are more than 300 images in the 256-page book.

Extra fun are descriptions and images for elements of Galaxy’s Edge that were toyed with in the early stages or that didn’t make the cut in the end for various reasons.

“We slowly started to peel back the layers of reality, figuring out how we could achieve an alien bartender,” says Doug Chiang, Lucasfilm vice president and executive creative director. “We knew that if it was a cast member wearing a suit, it would be a lot of prep and not the most practical way to go about it, so maybe the better way was to have an animatronic bartender.”

The concept bartenders in the book are a motley assortment of creatures with four eyes, pig faces, no-free faces or fishy qualities.

An early idea, Chiang says, was a big creature living in a tank behind the bar. That was the owner.

“It was going to be an animatronic in the water. It would’ve been fantastic,” Chiang says. “It was one of those sad moments where it was a great idea; we just didn’t have the technology or the resources to do it at this time.”

A table-service restaurant concept was drawn up. It would have been called the Kalikori Club, which was operating out of a converted two-level bathhouse. The eatery was “supposed to be almost a speak-easy, a hidden club. It is part of the under-the-underground world,” says Chris Beatty, creative portfolio executive with Walt Disney Imagineering. The book includes sketches of the Twi’lek woman who was owner and entertainment. She’s sort of blue in some sketches.

Plans for the Spice Den lounge included a two-store aquarium. Up top, it would appear to have kelp in it; down below, you’d realized that kelp was more of a big monster.

“One early idea we had was a bounty-hunter chase ride, which would fulfill our desires to be a bounty hunter who’s being chased down by the authorities,” says Margaret Kerrison, WDI managing story editor. The book also includes images for what could have been a “fast-action speeder bike chase” considered in the early days of planning.

The book includes several concepts for the blue-milk stand, including one that appears to hover above the ground.

We went with more of a solid setup with awnings,” says Erik Tiemens, Lucasfilm concept design supervisor. “I wanted to hint at the mechanics, CO2 gasses, things that are just sort of kludged together.”

"Finally, a creature named Elee was an early concept and, in a way, a ride.

“We liked the idea of a big beast lumbering through the land and having a very personal connection with you. So you would go up and pat her muzzle and she would react to you,” Kerrison says. “So you would go on rides. We actually had a path that went around the land.”

Concept artist Iain McCaig did designs for her, which Trowbridge says they loved.

“We did some models and figured out how we could bring her to life technically, and then ultimately what we realized is, with the kind of population we expect in the land, we won’t really be able to have her feel authentic,” Trowbridge says. A new book provides insight and illustrations concerning the making of Star Wars: Galaxy’s Edge, the land that Disney created from scratch at theme parks on both coasts.

Premium Member
Iger said “Be ambitious” and we got RotR and... what else? 1 ‘meh’ ride, 14 gift shops, and a food location. Great leadership from the same guy who said, “add trees here”.

Premium Member
...victory lap in print? It will be a short one.

last page should be a chart showing box office decline

Sirwalterraleigh said:
...victory lap in print? It will be a short one.

last page should be a chart showing box office decline

Solo or So Low?

monothingie said:
Solo or So Low?
Click to expand...

Thanks for the Tiki Room reference. My all-time favorite attraction!

monothingie said:
Solo or So Low?
Click to expand...

...the quality ruffles my feathers...for sure

Sirwalterraleigh said:
...the quality ruffles my feathers...for sure
Click to expand...

Nottamus said:
I thought that’s why we allcome to the forum?...to see what we missed and what could have been.
Click to expand...

how long is “long enough” before you yank the terrible IP and put in what the people want?

not a hard decision really at all

So this is a book about a restaurant TWDC didn't build due to cost cuts ?

"Hey everyone look at the great table service restaurant we decided NOT to build due to cost cuts."