Hi Friends!
I'm so excited to finally document my adventures with my first trip report. I've had intentions to make one for several years now so YAY!!
We've just returned from our quick, 4-ish day trip at WDW. I had set a few goals that I wanted to accomplish this time around that you can read about here in my pre-trip report.
https://forums.wdwmagic.com/threads/goals-trip-report.971938/
The husband and I traveled with our son (4) and my nephew (13). I will say that we had a blast, I learned a few things and I met most of my goals; but I definitely need a do-over as a little snafu altered some of our plans, but more about that later.

Trip Details
When: 3/3-3/6
Where: Split stay at Riveria/ Pop Century

Wednesday 3/3
The day started off super early with the typical travel day butterflies. We woke up dark and early (5:40am) for our 9:21am flight out of Cleveland. The little guy was like "Mommy, I can't believe we woke up before the sun came out, LOL".
We typically drive to my parents house as they live about 3 minutes away from the airport; this was so clutch when I still lived at home.
Rather than pay to park my dad usually drops us off. Additionally, we needed to pick up my nephew from their house. I wanted to get there early as I didn't trust that he'd be awake and ready, but to my surprise he was

We made the quick trip to Cleveland-Hopkins with 2 hours to spare.
With the exception of my nephews bag getting flagged, security was a breeze..
Sidenote***
A few days prior to the trip, I noticed that I input my husbands birthday wrong when I booked the flights. I called the airline to get it fixed and although the DOB isn't printed on the boarding pass, I was a bit nervous that we'd still run into issues...alas, we were all good.

We made a stop at our favorite airport dining spot. 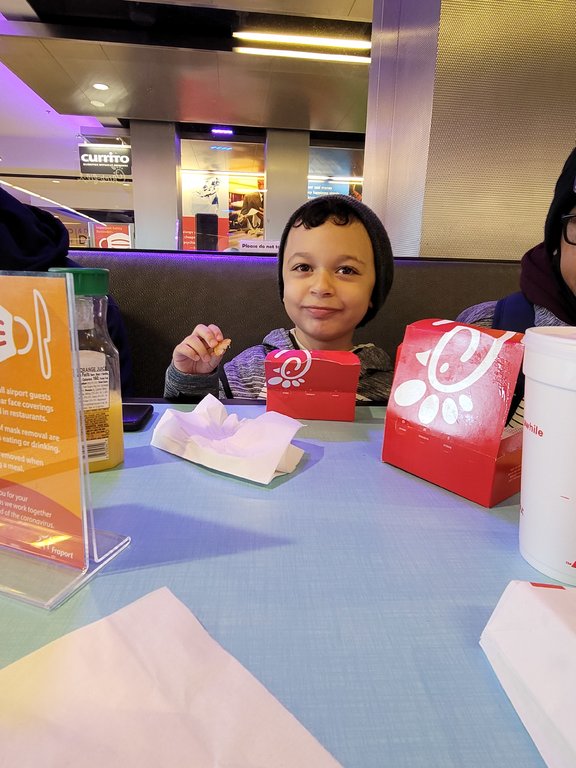 The grown-ups opted not to eat; I usually never pass up an opportunity to munch on chicken minis but I just wasn't feeling it this morning.

On to the gate!
I don't know if its because it's Frontier, but they are always and the very, very end of the terminal, lol 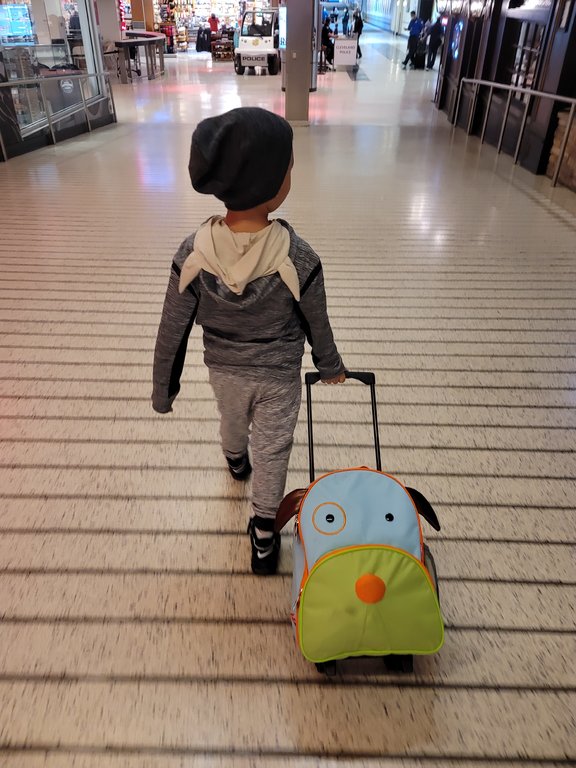 To my fellow parents with young kids, these Skip Hop suitcases are amazing for little ones. They fit under the seat and can be classified as a personal item so you don't have to pay to bring them on the plane. I was able to fit so much inside (a large packing cube, iPad with a bulky case, his toiletries, snacks, over the ear headphones and a pair of vans.) I highly recommend!

Once we got to the gate, we had about 40 minutes until boarding so I took some random photos 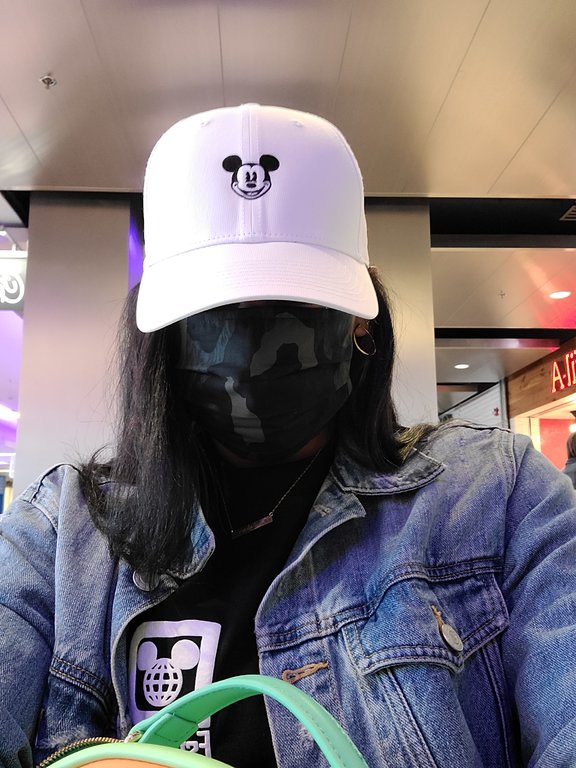 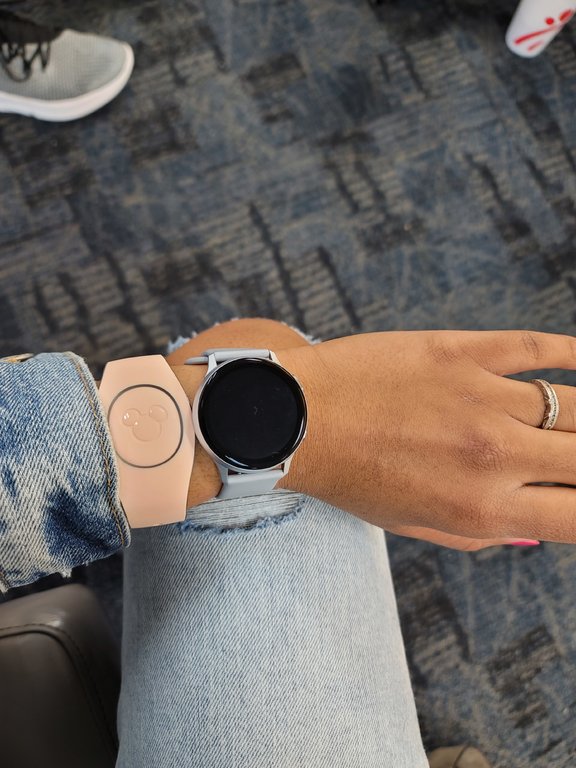 You see this little pink shoe? Well this little mama almost took my head off several times and I had to lean in to the guy next to me. When she boarded the plane, she had the WORST tantrum that I'd ever encountered on a flight, her little foot kicked so fast, lol. Watching everyones head turn back to stare, I felt so bad for the parents; I know they had to be overwhelmed and a bit embarrassed. Expecting a long flight, I immediately put my earbuds in, but thankfully she calmed down after they sat down. 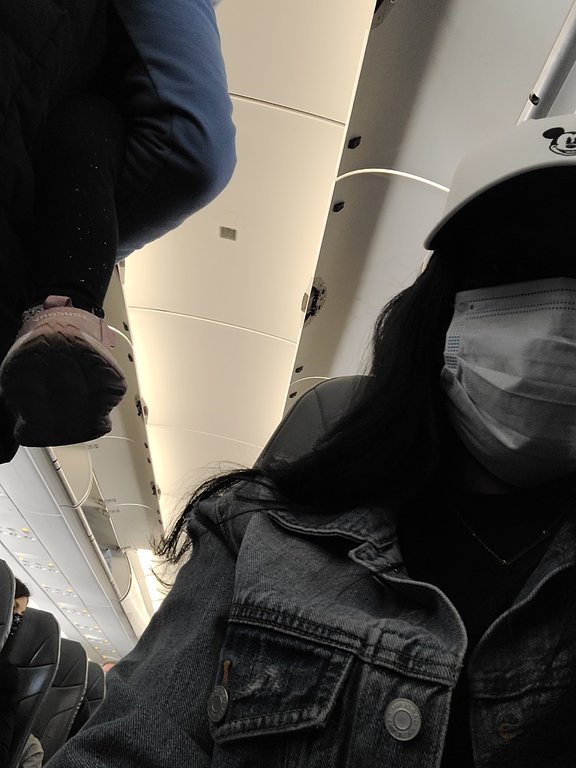 After an uneventful flight, we touched down in Orlando early! 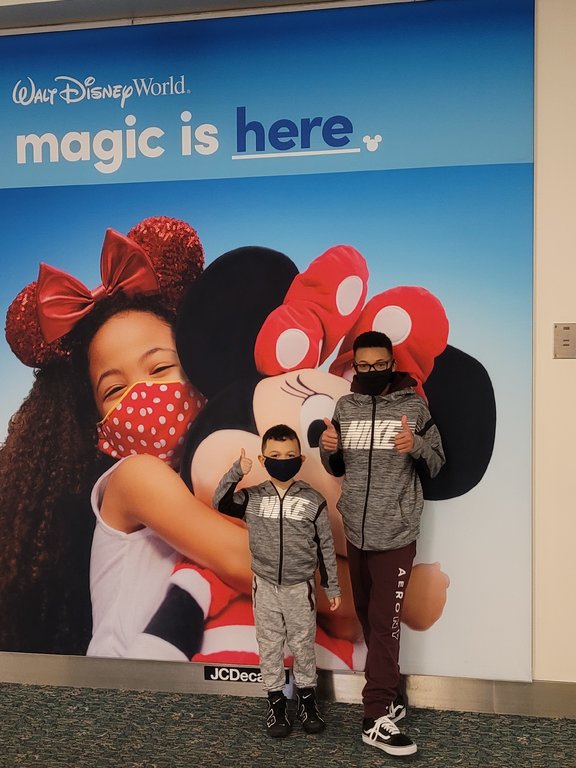 IDK about most people, but I love the new marketing photos with the masks.
After we got of the overly packed train, we met the rep for the stroller rental pick up and then made our way over to the rental cars. We usually rent with Almao and I thanked my lucky stars that we opted to rent with Enterprise. The Alamo line had about 30 people in line, I'd never seen anything like it.

Coming up, more of day one
Click to expand...

Ever hear the joke about the old bull and the young bull...


I will just leave it at that

amjt660 said:
Ever hear the joke about the old bull and the young bull...


I will just leave it at that

Ghostdog said:
Count me in too; following along.

cgersic said:
I'm in for the ride!

Thanks btw, I may have LOL'd at this one

I had to look up what GOATs meant because all I thought of was this...LOL!

That was me once upon a time, now that I know, I may use it a wee bit too much

ShookieJones said:
It's been a while since I made it to the first or second page of a TR! I am usually lagging about 4 pages and 3 weeks behind....so uhm...
Yeah I am in!
Click to expand...

Nice!! I feel you on that one, trying to play catch up on a TR 14 pages long is me all the time

Original Poster
Day 1 cont...
After we picked up the car and stroller we had some time to kill and made our way to our favorite Walmart to grab some "provisions". Usually I have a tolerate/hate relationship with Walmart and prefer Target but the one on Vineland and 535 is super clean, organized and well stocked; the abundance of souvenirs is a plus too. While inside, we got our first Disney text indicating that the room wasn't ready and that we'd get an update in 45 minutes or when it becomes available. After we stocked up on cookies, candy and junk ( we eat like a bunch of college kids) we made the short drive over to The Riveria, my DREAM hotel...

This sight gets me every time, vacay has officially started! 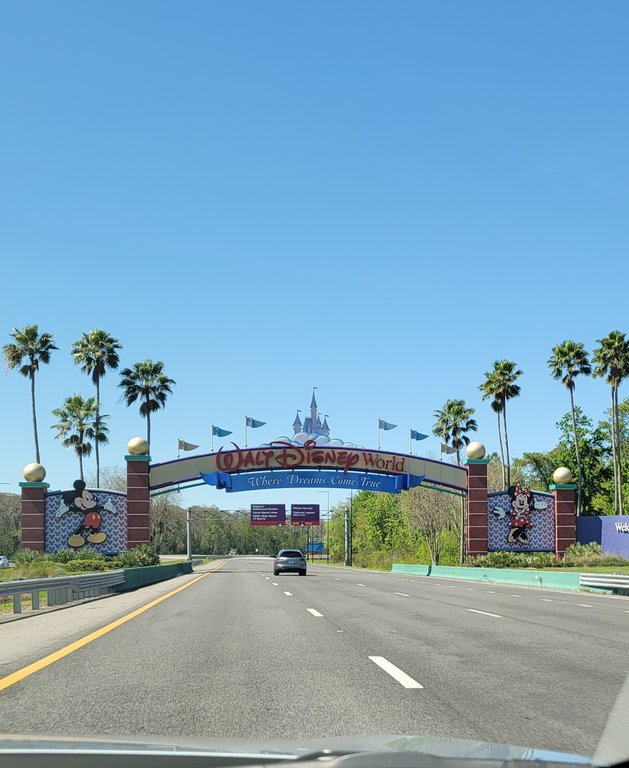 We've checked out this resort once or twice before, but it's just a different feeling when you drive up and are actually a resort guest. 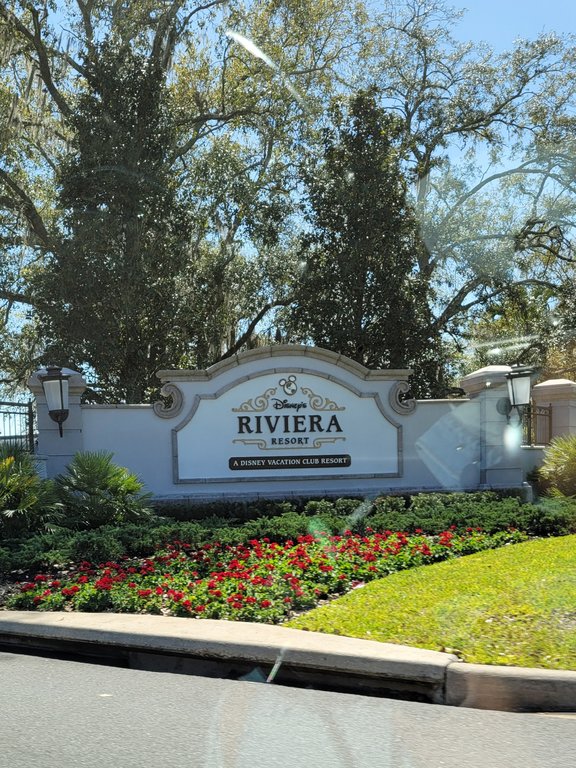 "Mommy, this is a really nice swimming pool" This kid cracks me up, so much 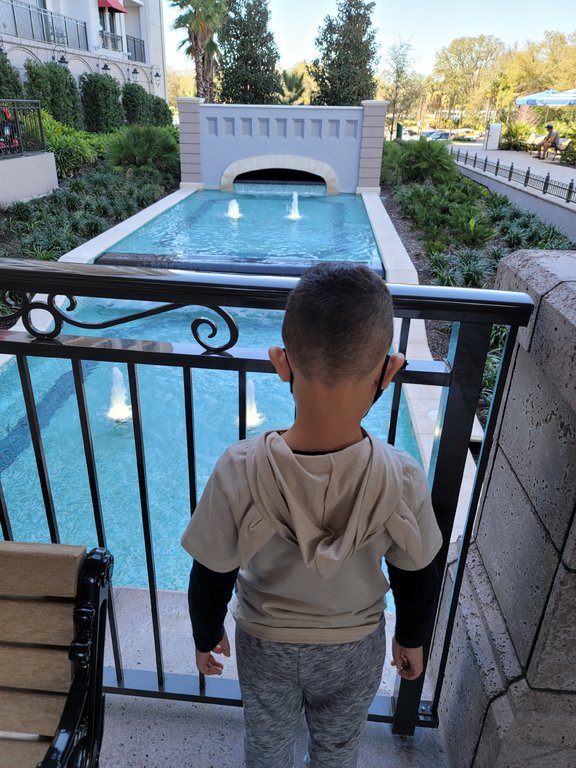 I checked in a couple weeks before arrival..I mean why not, lol.
I had our arrival time set at noon and I know that check in time is at 4, but I was hoping that we wouldn't have to wait too long. I was banking on this being our pool day, (swim time was one of my goals). I also wanted to enjoy some time in the room before our 7:15 dinner reservations. We hung out in the lobby for a while and I decided to inquire about how long it might take before the room was ready. They advised that the room was still being worked on and that it shouldn't be too much longer.
Lets just say, I'm glad that we didn't buy our usual stash of Lunchables from Walmart

We decided to walk the grounds a bit. I didn't take many pics; I remember feeling super ansy about the room not being ready as I didn't have a back-up plan. Sorry guys, I've been spoiled by previous trips. I do understand and appreciate the enhanced cleaning measures though.

The hallway with the European movie posters is such a fun element, I never realized the movies have different titles overseas. We watched a TON of Zootopia during the early months of the pandemic, so Easton got a kick out of that one. 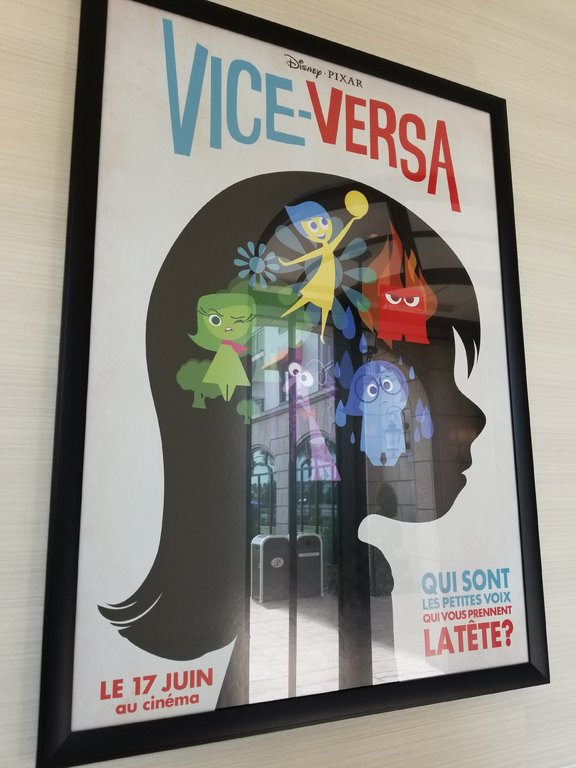 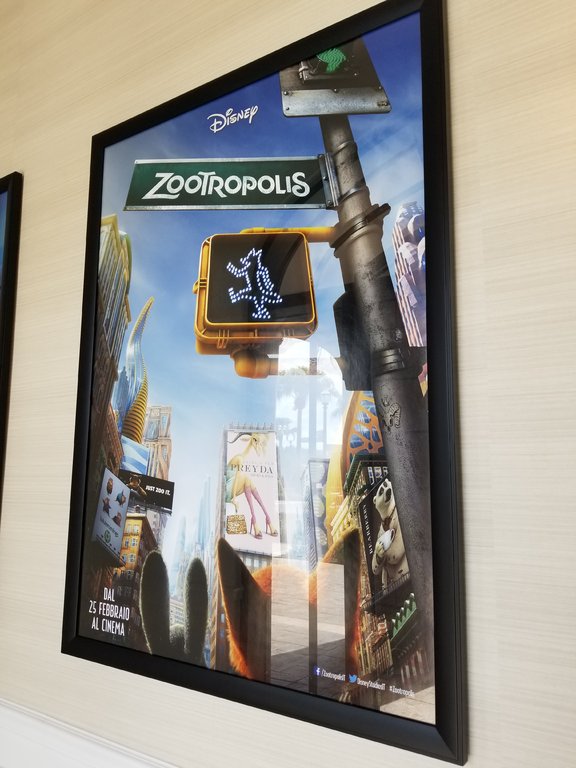 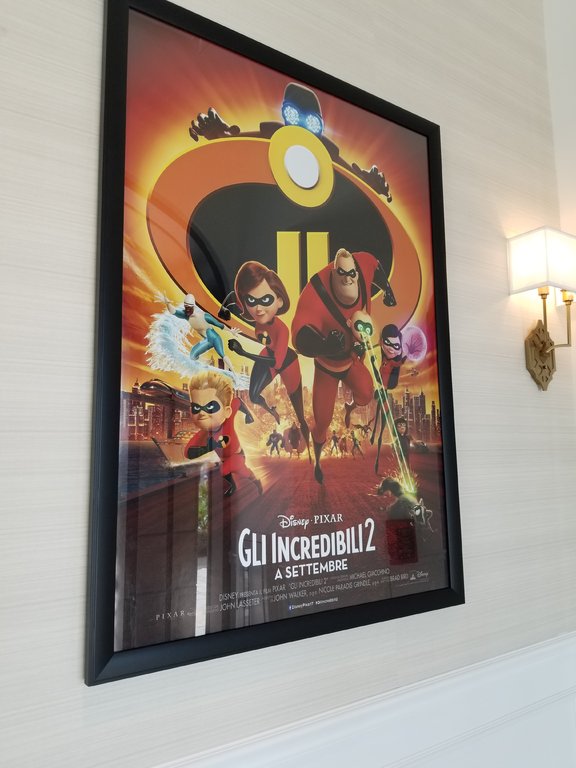 Little man let us know that he was hungry (which is rare), so we headed over to Primo Piatto. I consider myself to be a mobile order pro now I rarely used it prior to the pandemic but I actually dig it now. We encountered a group of older ladies who were trying to figure it out, usually I try to help but my patience just wasn't there in that moment; I let the greeter tackle that bunch and we decided to find a table and wait for our food. 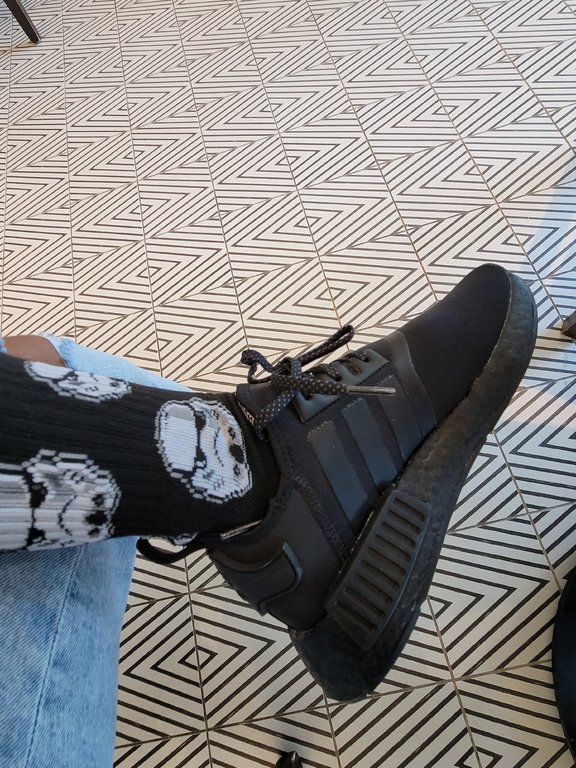 I was really digging my socks and the tile (my husband may have given me the side eye). Riveria has the best tile!! Some folks love the Disney light fixtures but their beautiful tile work does it for me.

I heard really good things about Primo Piatto and was super excited to try it. I debated back and forth for a while on what I wanted to try but I was certain that I made a good choice.

Hubby got the Bacon Cheddar Burger (I really wanted that) He said is was a solid burger and really enjoyed it. 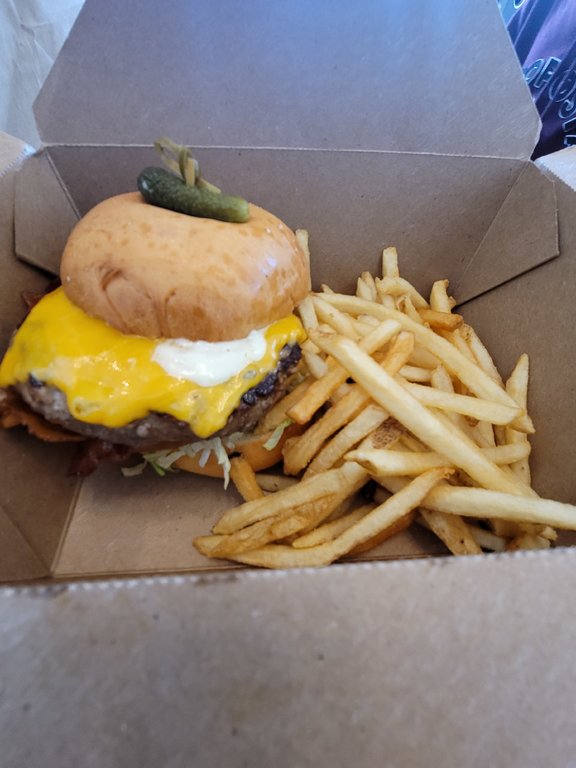 Little guy also wanted a burger which took me by surprise as he always wants chicken. Next time we'll go with what we know because he literally took 6 bites. This was the story of our trip. 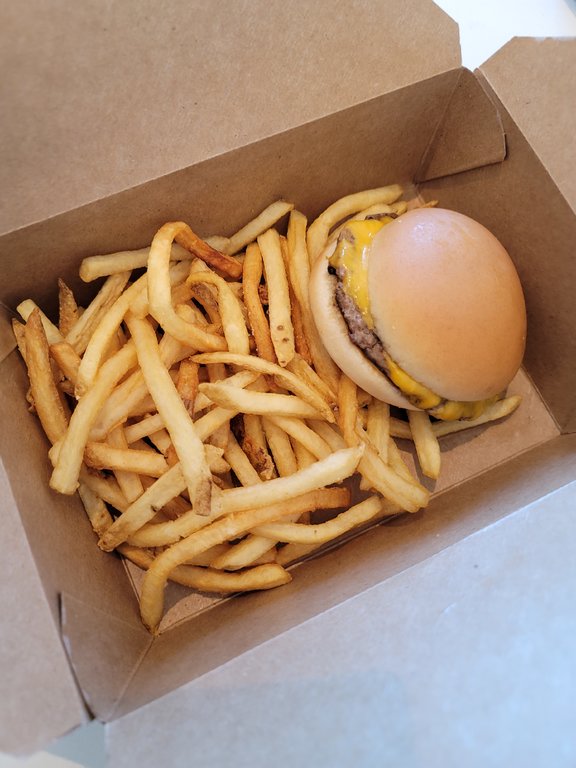 Next up we have the Sausage and Pepperoni Pizza. My nephew said it was really good, and I thought that it looked pretty tasty and was a decent size. 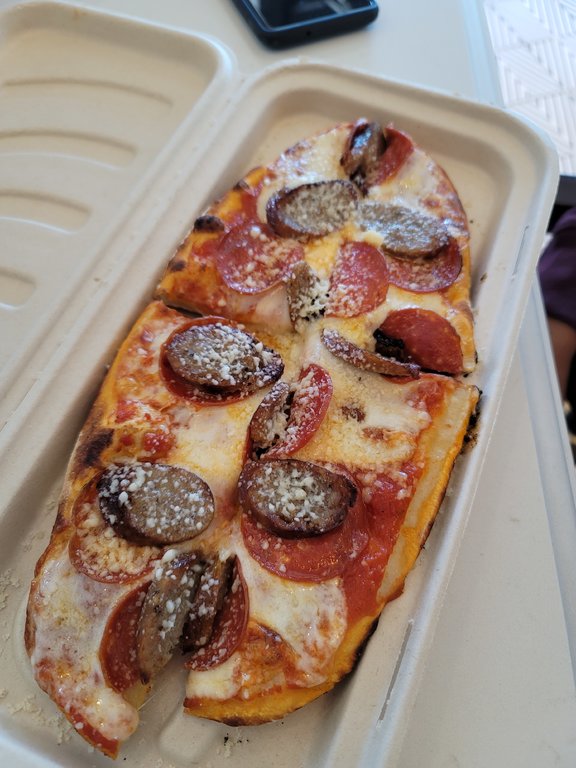 And now, the pièce de résistance..sorry I'm feeling fancy, lol. I ordered the Croque Monsieur and Romano and Herb Fries. It looked really tasty and the sandwich was huge. I wish that they would have pre cut it though. 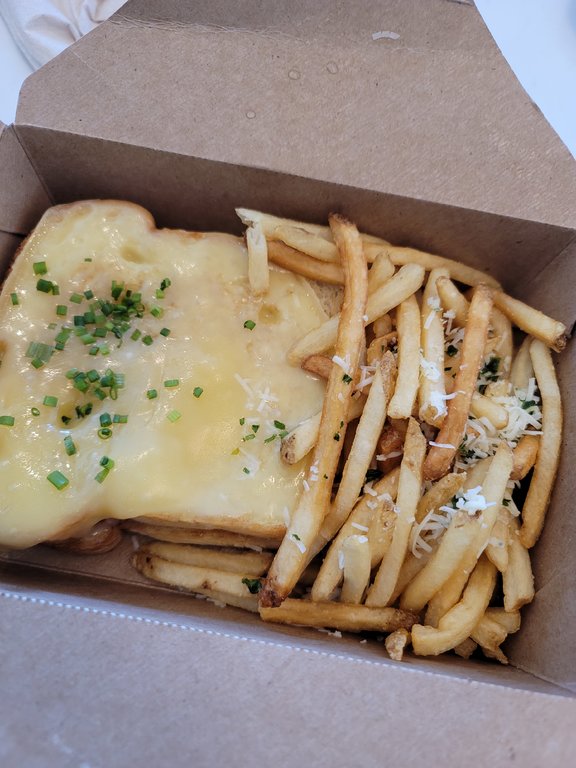 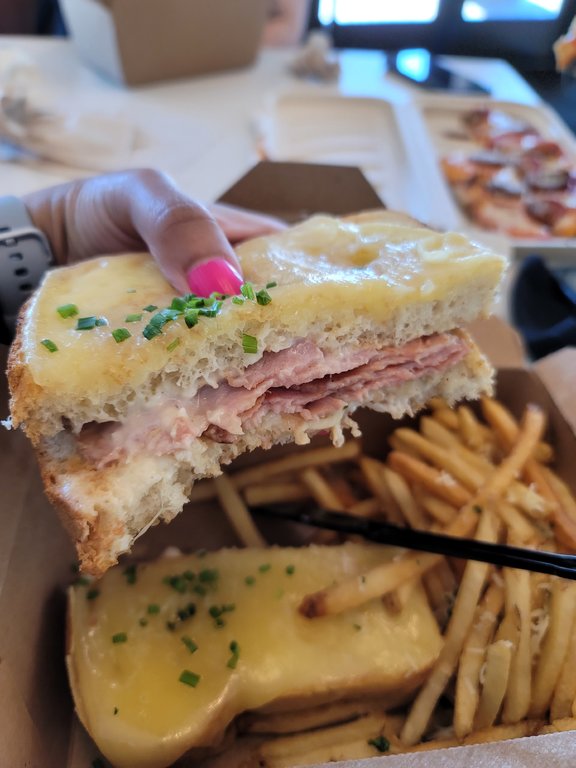 OMG you guys this sandwich was so bad! LOL I knew I should have got the burger.
It was soggy and had a odd taste. I'm not sure of the sauce or whatever was inside but it just wasn't a winner. Even the fries were meh, the cheese and "herbs" didn't add any flavor. I was able to salvage them with bbq sauce though. A certain someone bragged a little too much about how tasty his burger was..

After lunch we killed time and walked around a little bit more.
The restrooms out by the pool were really nice. Again the tile was lovely, as was the art work. I've seen this French travel poster illustration before so it really caught my eye. 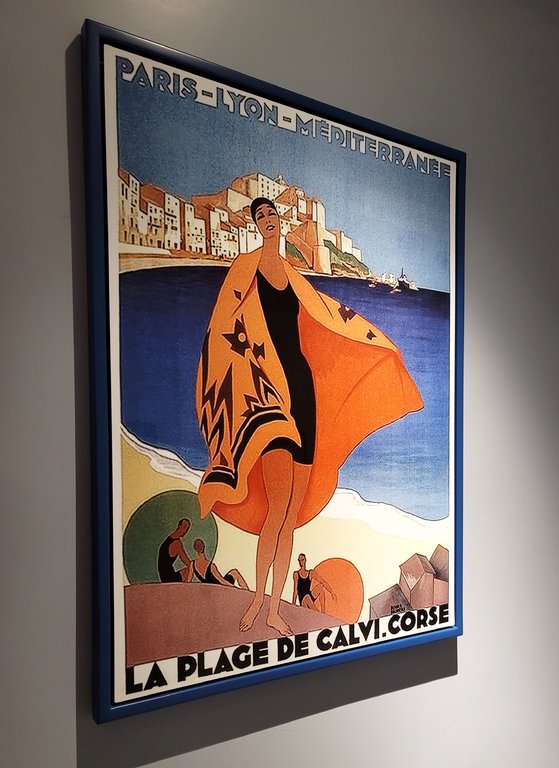 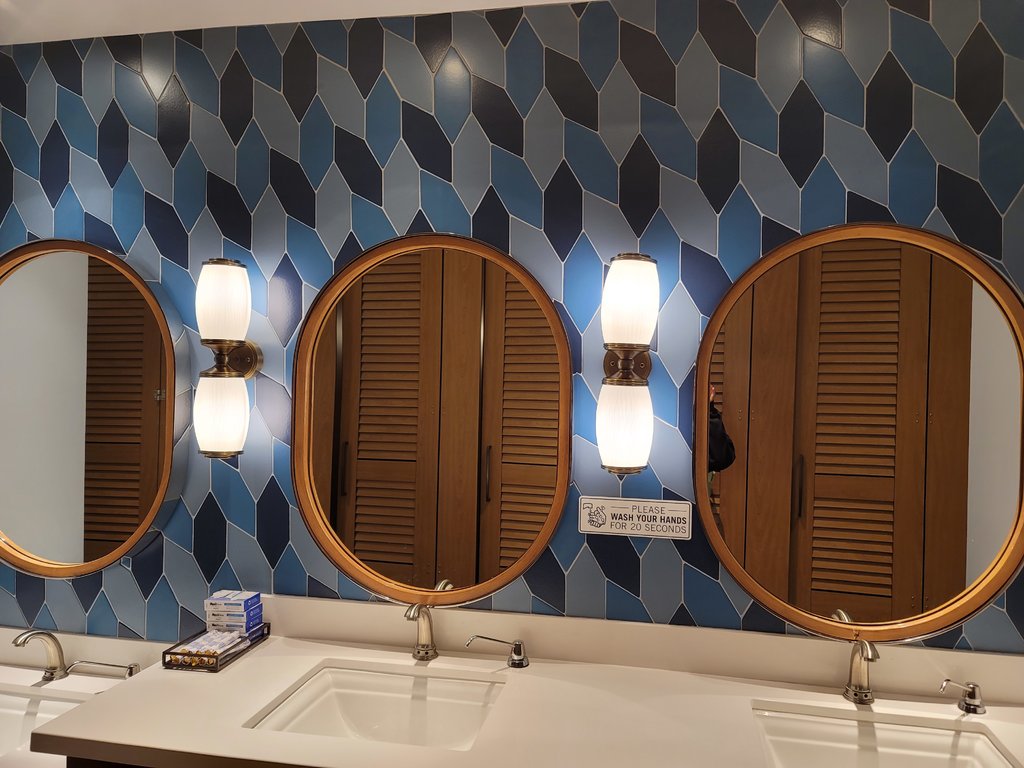 Selfie time because why not, lol 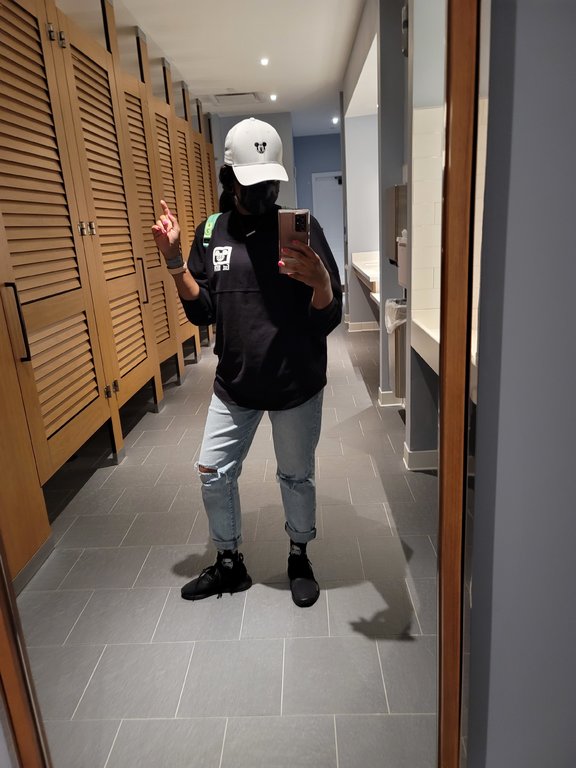 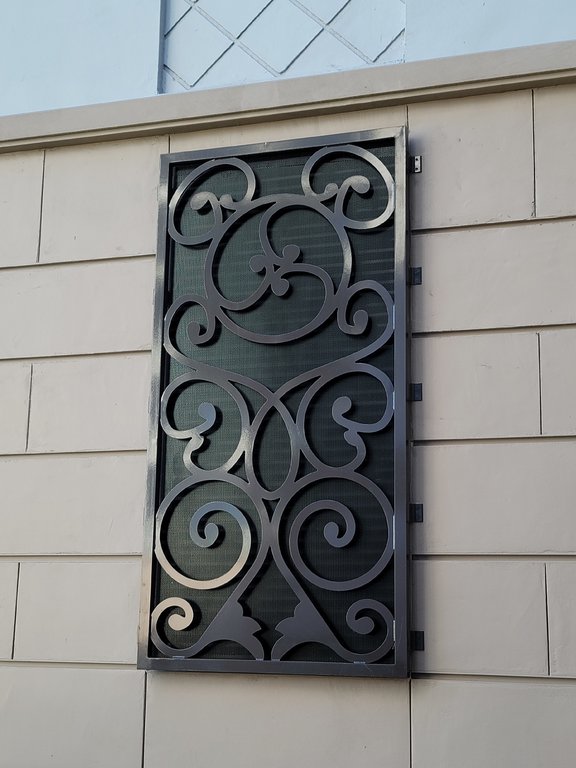 I swear every time I felt my phone or watch buzz I just knew it was our room ready text. It wasn't.
I tried to see if the boys just wanted put their swim clothes on in the bathroom, they seemed pretty clean. DH looked at me like I had 5 heads and said ABSOLUTELY NOT. (Yikes, chill out dude)
It was pushing 3:00 and I just really wanted them to have some pool time. I figured by time they got out of the pool the room would be ready. He was frustrated and told me to stop pushing the topic. We ended up walking to the car to grab the little ones trunks. I decided that I'd let him play at the little splash area. Halfway down the steps to the parking lot and we finally got the text, 2:55 to be exact!!! My mood immediately lifted and we finally made it up to our room!!

Next up: I hope to finish up day 1

Looking forward to seeing all your pics from Riviera.