Original Poster
Hello friends- just wanted to spew my thoughts and questions after a recent trip to the Disneyland Resort!

I've spent the last year visiting Walt Disney World so very often (as its pennies to visit compared to a long flight to California from NYC), but on my last visit to WDW the balloon inside me (which was deflating slowing) finally lost it's air. I do love parts of the Walt Disney World resort, but each time I visited I missed the beauty I expect from a Disney park.

Hotels like the Beach Club or Boardwalk are absolutely splendid, pure magic... but the North Korean attempt at a themed resort looming over the splendor simply rips me out of the story (I'm referring to the temple of the almighty Swan and Dolphin). You can't even escape it in Epcot! The endless highways and parking lots are so very evident of a 1970s design. Main Street with its patchwork concrete and carless design really brings me down. The attractions with dull sound, still animatronics, dated lighting and the absence of streetmosphere kept gnawing at me.

The majority of people I speak to often prefer Walt Disney World as their choice of themed entertainment. Most cannot even comprehend why anyone would like tiny, cramped Disneyland over the vacation meca of the world. I can't even explain to them why, as most people wouldn't understand the care and splendor of Disneyland. Too many people don't care what the pavement to Main Street looks like (let alone how it feels to tread upon it), nor the quality of attractions. It wouldn't be understood by most my peers of the simple magic of Mr. Lincoln, the unassuming entrance of Pirates, the kinetic energy of the Disneyland Railroad...

My 7 day trip to Disneyland reconfirmed all my feelings towards this place.

The last two years of Project Stardust has refreshed the park in the best of ways. The colors are dazzling, the pathways are more manageable than ever, and the attractions are in pretty decent shape and best of all- the park really doesn't feel too "different." 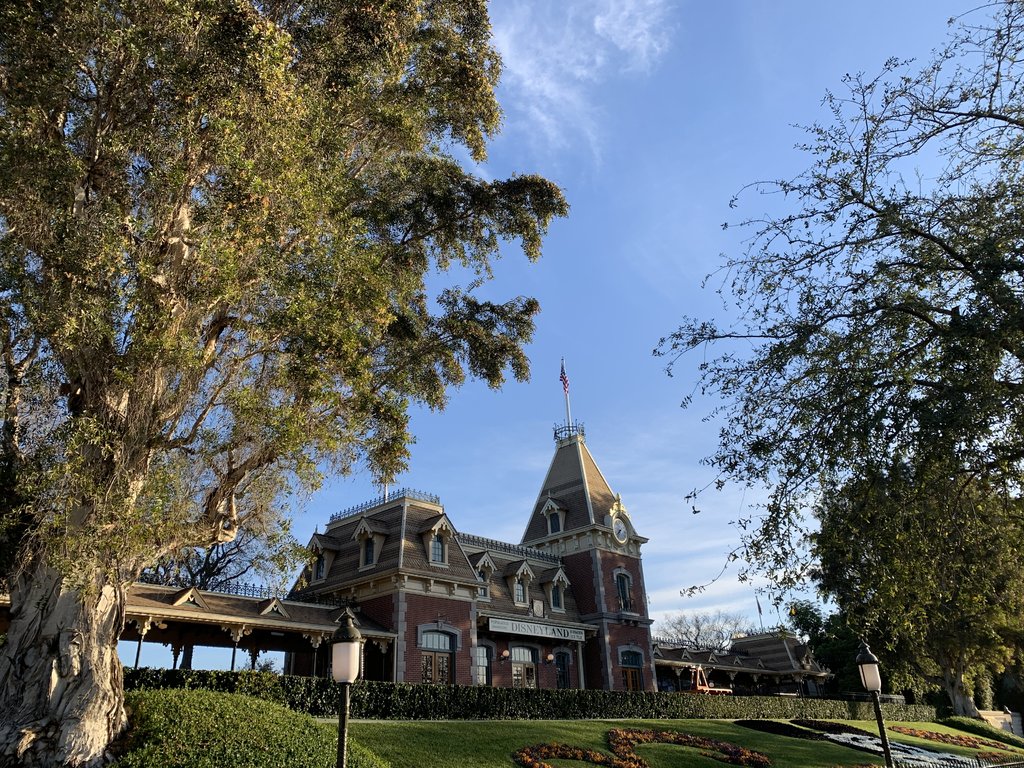 FANTASY FAIRE
With the lovely refreshing of Sleeping Beauty's Castle, anyone know why they seemed to forget to refresh these turrets, found in Fantasy Faire? The stonework also remains the same as the previous iteration of the Castle.

I did forget how lovely Fantasy Faire is. While there is no daytime programing that interests me, Maurice's Treats is a great food cart with very little lines. The snacks are actually splendid; the churro gears are delicious, as are the bagel twists. Theres even open faced sandwiches that looks pretty good. The courtyard is oozing with subtle story cues, a darling music box, and the slumbering cat Figaro (who was not functioning on this trip, which was a bummer as the tweeting bird and sleepy cat is a great humorous gag!) 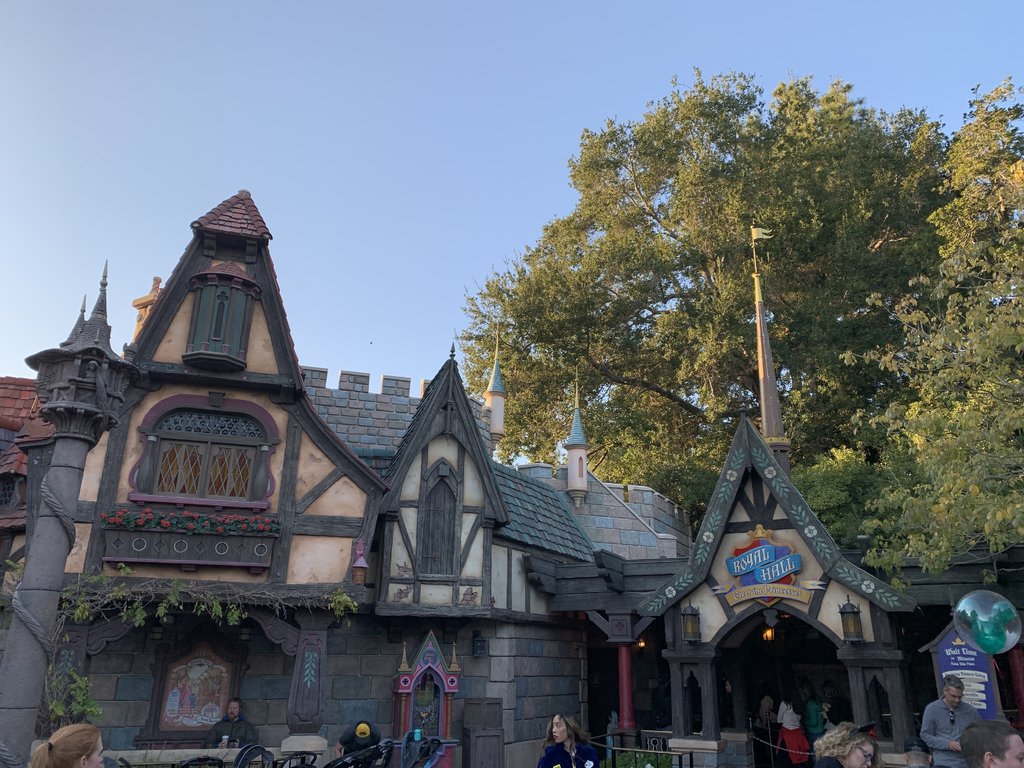 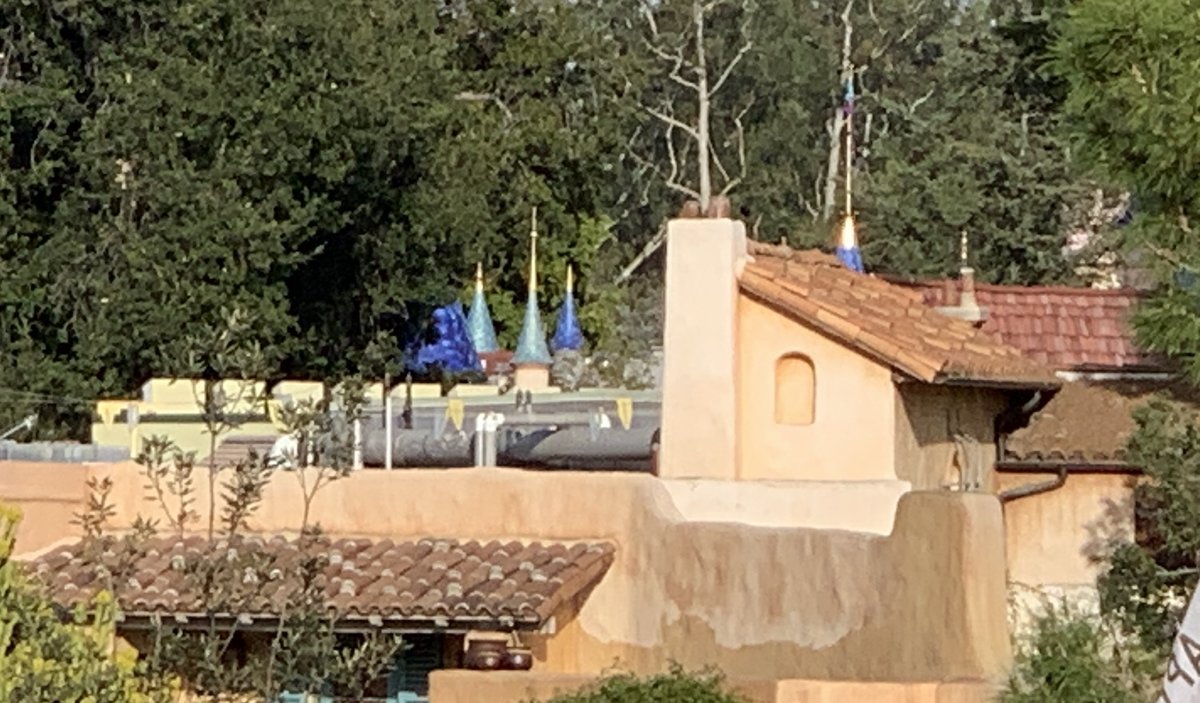 The wall is supported by wall jacks, with a cutout for a door, perhaps. Is the story that a new building is being erected? Would possibly make sense seeing as Frontierland takes place in a period of growth, as buildings were being constructed all across the new frontier (but why the door cutout floating so high above the land?) 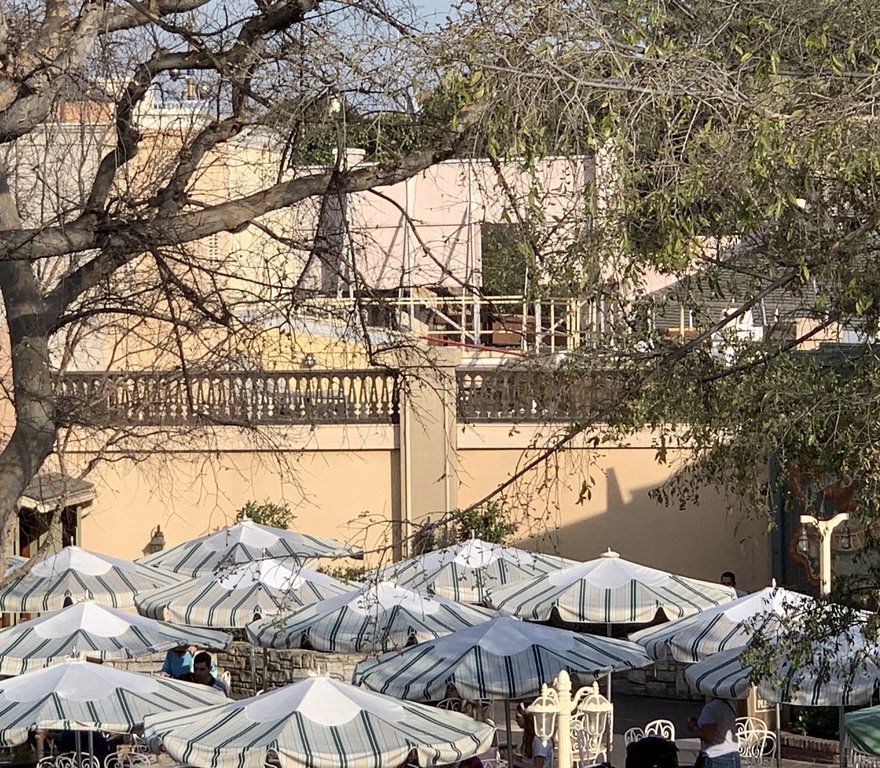 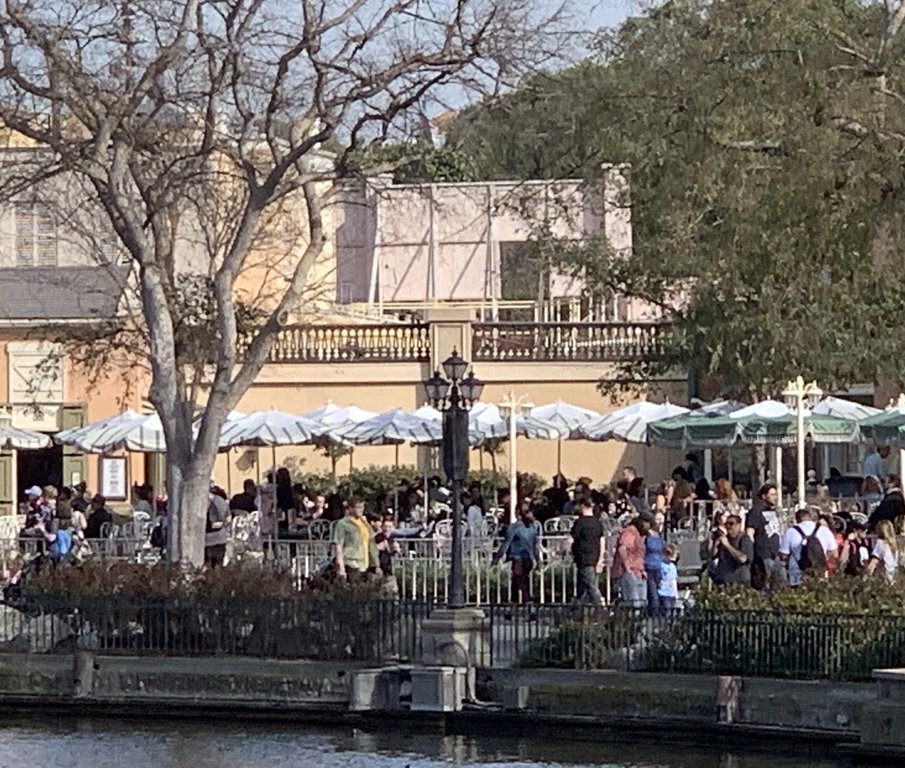 As we wind past the bend between Frontierland and New Orleans Square, I was struck by the slightly poetic rhyme between old Disneyland and new Galaxy's Edge. The petrified trees of Batuu is surely an epic sight, I wonder where the inspiration to build a land in a canyon of petrified trees came from? 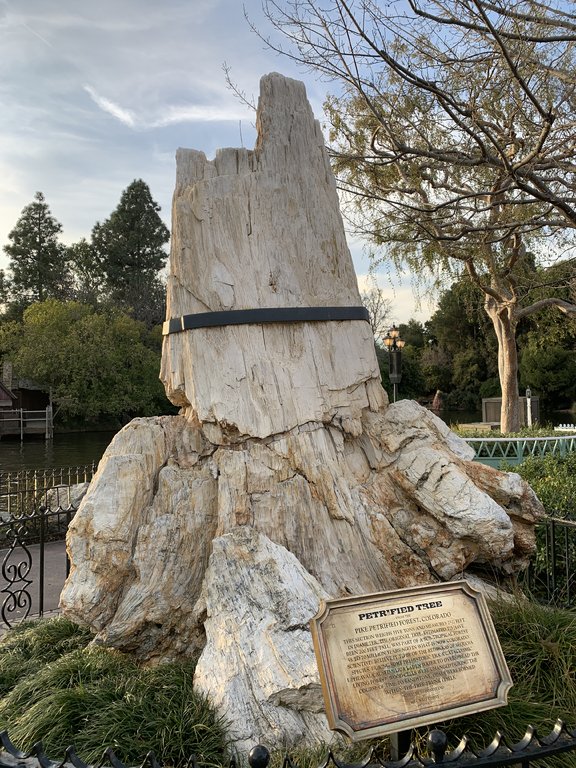 NOS
No questions for this next one, I just wanted to share this moment from New Orleans Square, blanketed in a cotton candy sky.

I so often wish I could personally thank Walt Disney for such a intoxicating land. It is the mid 1960s, and at this point in our country's history quality theme parks were few and far between. The only competition was trashy Coney Island and scummy oceanside piers, yet Walt Disney found purpose in building such a mature and authentic place in his Disneyland. For what? For art? For pure exhibition? Because he knew it would be meaningful? Because he cared what people experienced in his park? It truly explains in one simple gesture the kind of visionary he was.

Here, the festival of Mardi Gras has begun to shimmer. 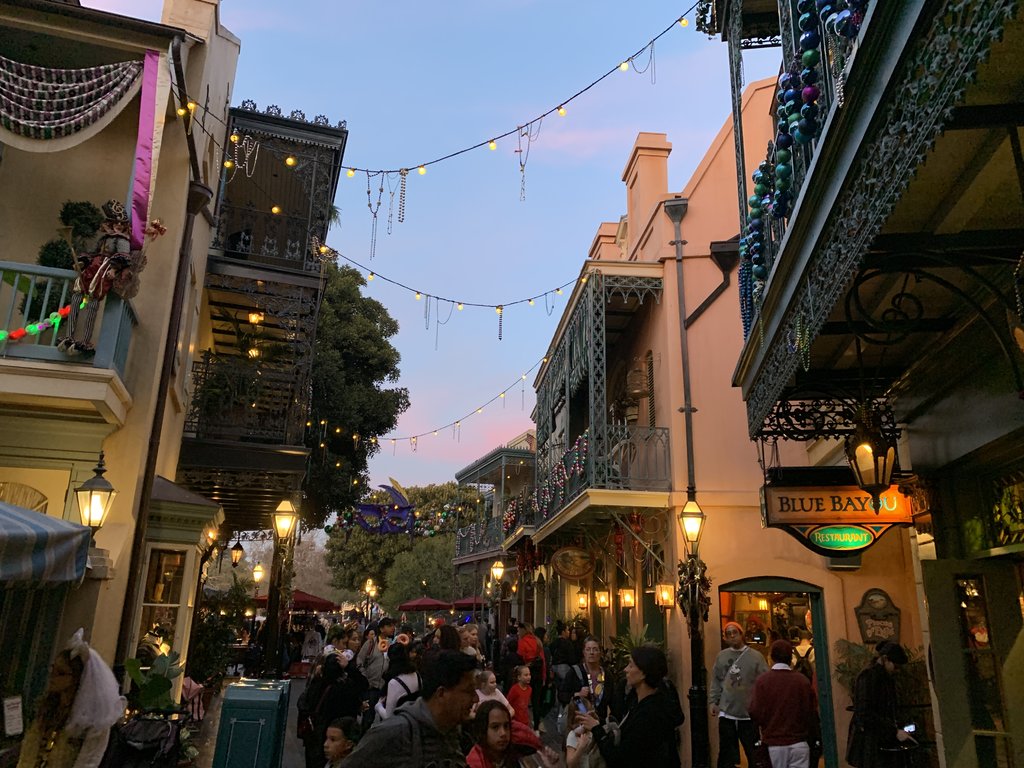 BATUU
Now, in stark contrast, we find ourselves at Black Spire Outpost, where we see a band of off-world travelers waiting for godot.

What they are looking at confuses them. They stop, wait... then continue on. The story cues here at the fuel station on the edge of the market are less affective than simple little Figaro in Fantasy Faire, asleep on the window ledge in an looping story of patience and song. Why is this, why does the fuel station confuse instead of inform? Because this fuel station was meant to have a character inhabit it. It was meant as a place where off-worlders could meet a friendly Batuuian as they land at Black Spire Outpost.

We know now, if you read the book, who this lovely character would have been. But she'll just be that, words on a page, because we have no visionaries ensuring meaningful guest experiences. 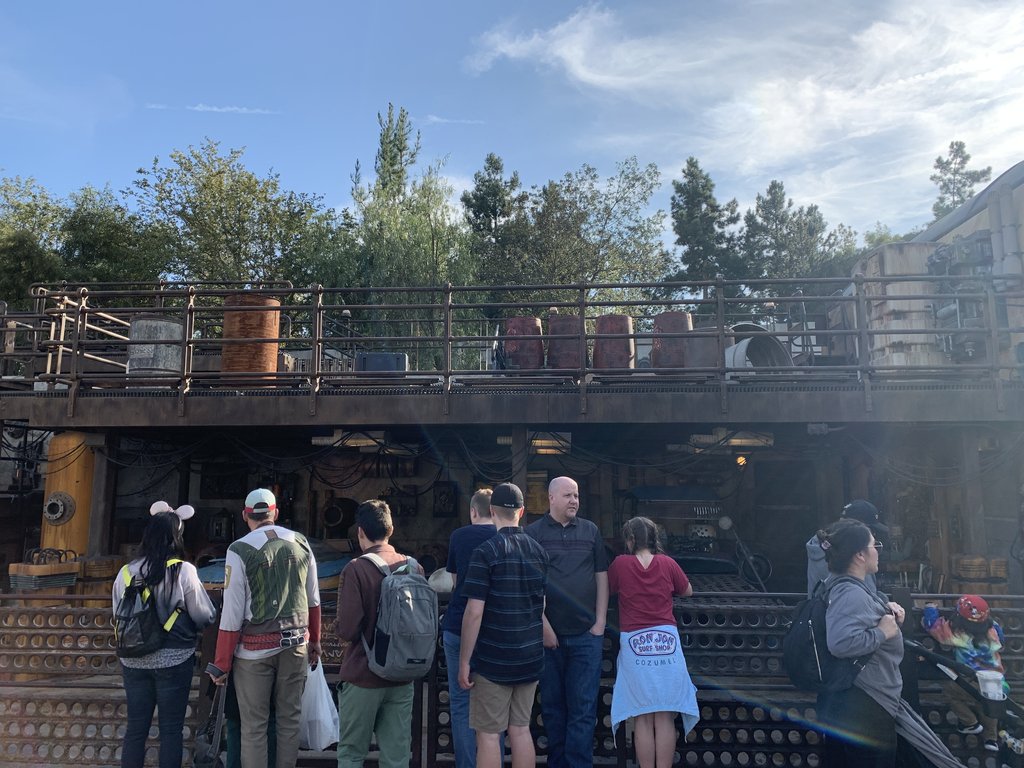