We were due to stay at the CBR (mainly due to the Skyliner) but with prices going up and such we've downgraded to Art of Animation, Little Mermaid room. Anyone got any info about it? Never really looked at it before really. I think the kids will love it.

Queen of the WDW Scene

Its a great resort for decor and food but I don't recommend it for how much walking there is from the LM rooms plus they are the old room configuration I believe.
For the price I'd stay at POP before AOA.
AOA is actually one of my least favorite values.
Also LM rooms are often excluded from discounts.

Premium Member
Little Mermaid rooms have new mattresses so that's nice. The walls are thin and all the doors are on exterior hallways and it's a pretty far walk to the lobby/big pool/ buses, etc.

But my daughter absolutely loves that resort. I'd honestly choose POP before AoA LM rooms too, but if your kid(s) would love the theming, the theming cannot be beat. Her joy is worth the extra walking to me.

We stayed at AoA in a LM room for our last trip (over NYE this year). We loved access to the Skyliner, and we really enjoyed the splash pad for kids and the pool. We have a 2 year old and she was OBSESSED with the room theme and, in particular, she loved the Elephant Graveyard section outside the Lion King family suites. We spent so much time running through that play area and it became a highlight of the trip. I'm so glad we stayed there for my daughters benefit. As previous comment says, her joy was well worth the extra walking.

All that to say, our next trip will be at POP (booked for NYE coming up but obviously dependent on the state of the world). We want the access to the Skyliner but the general niceness of the rooms at POP outweighs the theme at AoA for us. The Murphy bed in the POP rooms is a huge benefit for us because it gives us two beds for sleeping but extra floor space/better table during the day. The sliding door divider to the bathroom at POP makes mornings so much more pleasant. I also like the food at POP better. When we stayed at AoA last year, I walked twice to the food court at POP to get food because the options were better (for our family). We will probably make the trek over the Generation Bridge a few times to visit the Elephant Graveyard. Whatever we end up doing will be a nice change from our current homebound situation!

Loved the theming in the LM rooms at AOA and at the resort in general. It feels VERY Disney. But weirdly found the beds seemed very short vs. staying at moderates? May be the difference between full and queen? I'd stay again in one of those rooms in a heartbeat as I really liked the theming all around the resort and I didn't mind the walk back to the room. But I definitely preferred the beds at the moderates to the bed at AOA.

I'm sure there are plenty of reviews around the 'net, but I posted one with lots of pics of the room on my site if you want to check it out - it's my username here .com (not sure if I can post the direct link!) - or just google my username and Little Mermaid Art of Animation and it should turn up!

Super structures are my specialty!

Premium Member
The Big Blue Pool will probably be popular with your children.

Below is an OLD (pre Skyliner) aerial view of POP/AoA.

In the Upper left center in the Little Mermaid Section of AoA. It is very convenient to the Skyliner, but a bit of a walk (Red line in Pic) to Landscape of Flavors and busing.

1) Rooms - They are the non refurbished Value Rooms of Pop Century and All Star Movies (half of Music) days past. Nothing wrong with the rooms, but again, they have NOT been refurbed. The theming is great with LOUD colors and graphics.
2) Busing - AoA nad Pop had been sharing busing more often that the All-Stars, especially after the Skyliner opened. Who knows what Disney Transportation will be when they reopen, and you'll only have to worry about busing when going to Ak and MK. The Skyliner REALLY helps when going to Epcot and DHS, and might have the best shot to survive with minimal changes after reopen. ALL Disney busing was hit or miss anyways.
3) AoA WAS participating in the Disney discounts, with some nights being cheaper than Pop (really had to plan your vacation on those nights in the discounts)
4) Landscape of Flavors is a great food court
5) The AoA Resort approaches the Moderate feel, as the Blue Pool is unreal!! It is a certainty some will try to enter the pool without being a guest there (if you spend any time at the Blue Pool, you'll see these peeps) again, a Moderate Feel without a TS restaurant


AoA is a great resort and is our 3rd Favorite behind Pop and Movies....it would rank higher but the price is much higher than Movies, and the discounts were harder to grab than Pop. You'll have a blast. 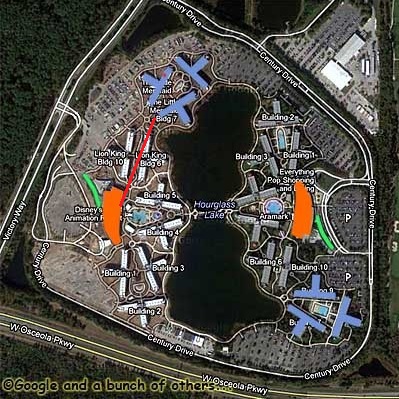 Original Poster
Amazing. Thank you so much for the info!

We stayed there the 2nd week of March for part of Spring break. We loved it. We used the skyliner a bunch and had good luck with the buses. My daughters enjoyed the theming, the ping pong and arcade. We didn’t ge a chance to do the animation there, but have done it at animal kingdom and it is a lot of fun.

downside: It seemed like the we’re remodeling some of the rooms, but I don’t think ours had gotten it yet. No in room coffee maker, which is a pain if you’re up early rope dropping and the food court isn’t open yet.

How I’d judge overall: My kids want to stay there again, possibly in the cars area.

Does anyone know the state of the remodel on the LM rooms? Has the remodel been in progress since March, or did the stop all activity at AoA?

Didn't realize refurbs had began at AoA....below is a link

Strange the AoA refurb did not include the Murphy bed, but at least did include a coffee maker. No clue as to how far the refurbs progressed, or if they continued/continue during the shut down.....
A

Original Poster
Will all LM rooms be getting the refurb? They look great.

Andrew Appleby said:
Will all LM rooms be getting the refurb? They look great.
Click to expand...

Should be a safe assumption they’ll all get the refurb, ..... , the question is the timeline

I have stayed at AoA twice and it is a very nice resort. The food court and pool are fantastic. Other than Pop Century, I would say this runs second to that.

Stayed there on a buddy trip and LOVED it!! The theming at AoA is amazing and the rooms FUN! I didn’t think the walk was all that bad, I worried about it before going after reading people complaining about it.
A

Tomi-Rocket said:
Stayed there on a buddy trip and LOVED it!! The theming at AoA is amazing and the rooms FUN! I didn’t think the walk was all that bad, I worried about it before going after reading people complaining about it.
Click to expand...

That's great to hear. I think a few negative reviews worried us but we're looking forward to it.
C

Andrew Appleby said:
That's great to hear. I think a few negative reviews worried us but we're looking forward to it.
Click to expand...

We stayed in a Mermaid room the first year it opened and were intending a Nemo Suite in June. This is definitely the nicest of the 'Value' hotels - theming is terrific.

Man, little girl me would've been giddy to stay there. Ok, grownup me would be pretty giddy too.