Trip Report They're coming over ... and we're not going to WDW??

Ok, some of you (I specifically remember @riverside and @Laurenciaa) asking if I'd consider doing a trip report. I'm more of a "behind the scenes person" but as so many of you have entertained me with amazing trip reports, it would be really impolite of me not to give back to you all. I'll do my best, because I hadn't thought of doing one before I left, so I didn't take any notes, and there are some huge holes in my pictures...

Ever since our trip over in 2009, just before C started school, we've always combined a trip to visit my family with a trip to WDW as well. And each trip has been with my sister and my BIL. That year we went around Easter-time, because it was what worked best with my work schedule. And then of course C was in school, so I tried to be "correct" and take her during the summer holidays, but it was just too oppressively hot. Not just in Orlando, but up and down the entire East Coast where we visited family and friends. So I said NEVER AGAIN to summertime visits. And until she started junior high, I had a bit more leeway taking her out of school for a week or two outside of school holidays, citing such things as wanting her to experience unique cultural celebrations when we went back one year for Thanksgiving (huge cultural fail: C doesn't care for turkey, does not like stuffing, and does not like pecan pie!). On another trip, I was able to take her out a week before the Christmas break, allowing us to go to WDW around 15 December. But then C started junior high and things got complicated. Even taking her out for a day created all kinds of problems (and this was only for us to get to DLP early enough to get our bibs for the 5K race - held on a Friday evening - during the half marathon weekend). Luckily, that year (2017) I bundled my "request" for that one day and 2.5 days after Christmas together with a reason the school really couldn't refuse. So I said never again at Christmas-time...

But back in January-February 2019 I started to think about spending Christmas 2019 at my sister's (well, at one of my sister's). But C had exactly 2 weeks vacation and I did not have a reason the school couldn't refuse, so I told my sister we were coming for Christmas but given the fact that it is the busiest, craziest time at WDW, I thought we should skip it this time. My sister agreed. Since she and I were always the two planning/pushing for our trip to WDW, I figured that was the end of it. But then on Skype calls I'd hear my BIL say "they are really coming over but we aren't going to WDW"? And C would chime in occasionally with a "yeah mom, really?" So one day when it was just my sister and I on Skype, I mentioned that it sounded like my BIL really wanted to go ... and he's someone who rarely expresses emotions/desires. I told her it would be crazy, and there would be NO WAY I'd set foot in a park on New Years' Eve. But if everyone was willing for a more laid back trip, then I'd be ok with planning one. And so it was decided.

But in order to go away on vacation, we first had to bring Indiana and Caraïbes to kitty camp. And because I know you like kitty pictures:

This is a very rare picture of Indy. 1) she pretty much refuses to look anywhere into a lens (telephone, camera, or computer monitor) and 2) she is almost in constant motion so you have to take about a dozen pictures to finally get one that is only semi-blurry. This one is a unicorn: she is looking directly into the lens AND she is not moving! 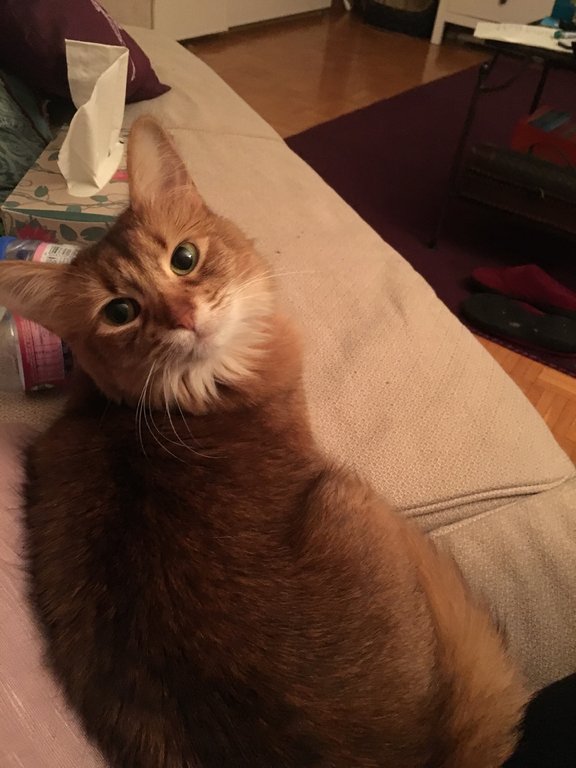 This is Cara. Pictures of Cara are a dime a dozen. Cara will look directly into a lens. And while she may have her 10 minutes of running around like a crazy cat, outside of those 10 minutes she just sits/sleeps (or goes to the door and meows loudly for us to come home, even though we call out to her that we are in the living room). 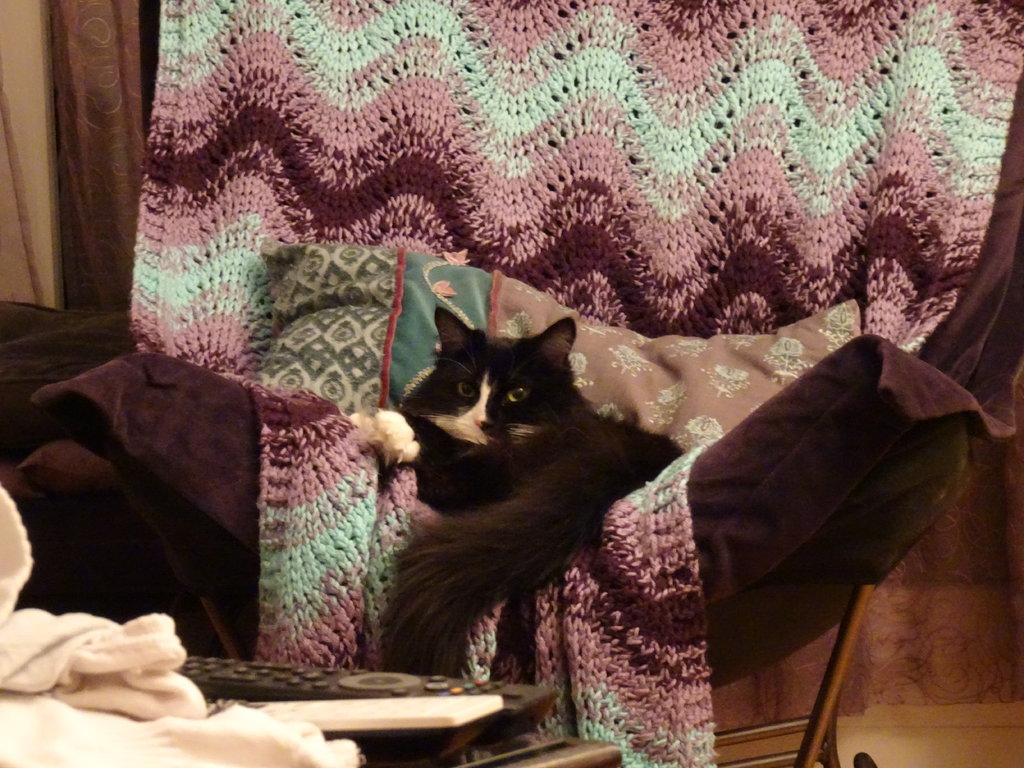 Once the kitties were safely delivered to kitty camp C and I could actually pack a suitcase without constantly removing one or both cats. And I was officially on vacation. C still had one more day of school. And what does a 14 year old ask when you driving home from kitty camp just about the time all grocery stores are closing? (And before you think it was really late, grocery stores close at 7 pm weekdays. 6 pm on Saturdays. They are not open on Sundays.)

"Mom, do we have any bacon?" No, we're leaving tomorrow after school. We don't have much of anything in the fridge. Why?. "Because we decided to do a breakfast in class tomorrow morning, and I'm supposed to bring something typically american". Ummm, not sure what to tell you kid, because even if you ran to the grocery store when it opens at 7:30, you won't be able to cook bacon and get to class by 8:00. "Oh. But what should/could I bring?"

And this is my problem why??? Because I'm a mother. And I love my daughter. And I was probably feeling guilty about all the times lately I stayed in the office until after 7 pm so that I could try to get things off my desk before the end of the year... How about pancakes? I'm pretty sure we have some Aunt Jemima at home.

I made most of the pancakes ... starting at 6:30 am ... on my day off. In C's defence, she did get up early, and she did make some, but I realised that there was no way she was going to get to school on time if she continued making the pancakes. So I made most of them. 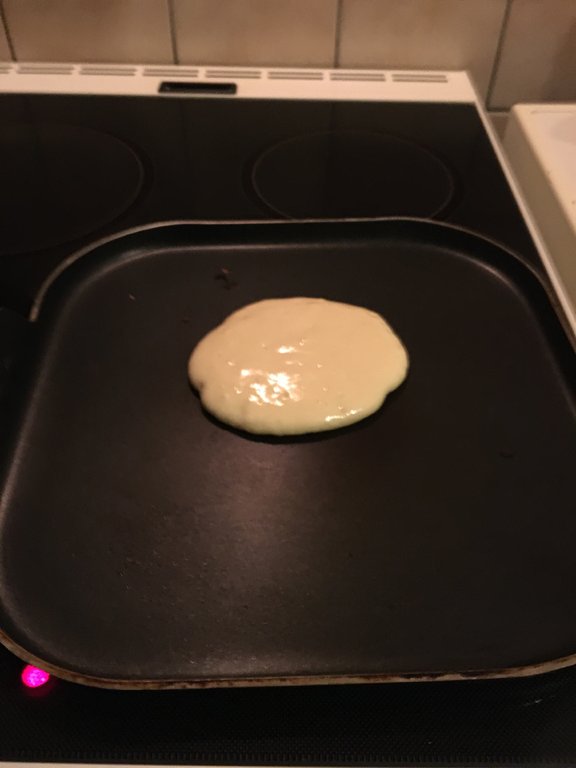 And after school (and after my hair cut and getting my nails done), we called a taxi and C and I were finally off. Don't let the smiles fool you. I am a VERY nervous flyer. I just "pretend" I am relaxed. C on the other hand loves flying.

Waiting for our first flight to Paris: 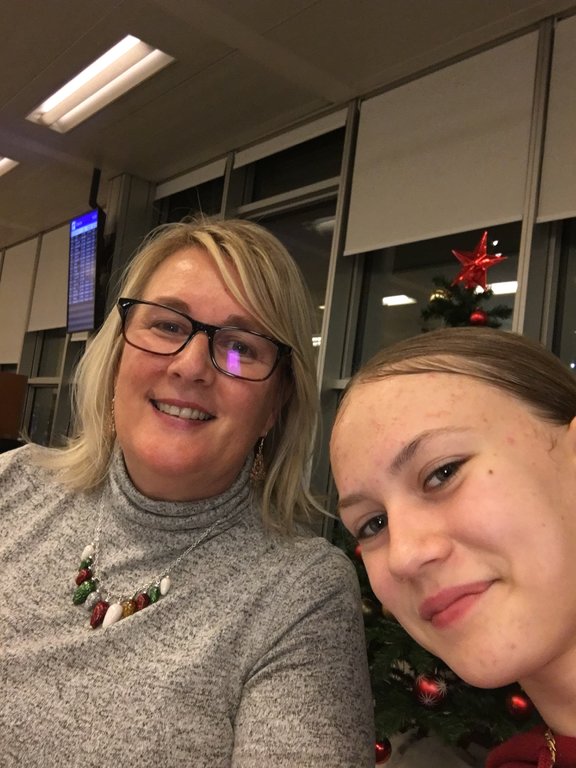 And finally the next morning for our transcontinental flight: 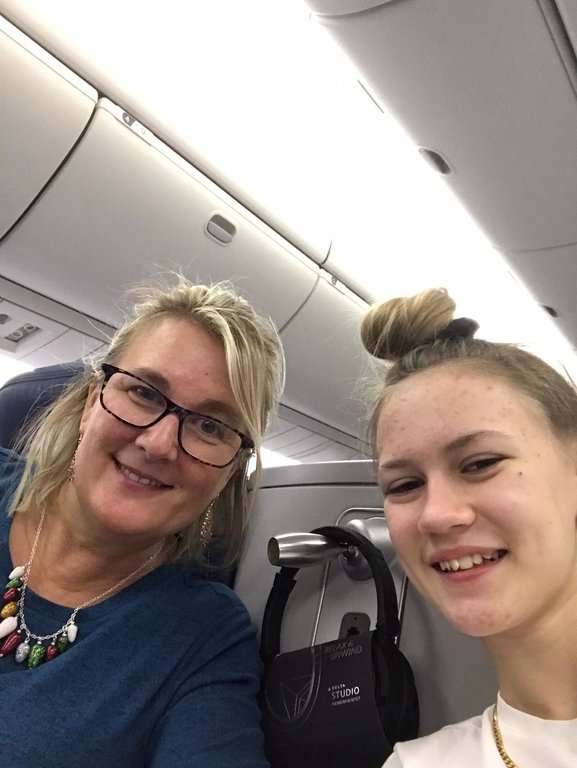 UP NEXT: After an atypical Christmas celebration, we make it to Port Orleans Riverside
Click to expand...

I was sure you’d take the top of the podium. I feel honored to have you here

Hopefully I don’t make you wait too long!

Thank you, I think they are gorgeous too. Well, Indy always. Cara grew into her looks. She was a kind of a funny looking kitty with an adorable personality.

Mea culpa! You did ask, I do remember now.

And if the pancakes were only for me and C (and not 20 classmates) I would have made them like this:

Following along. We visited riverside while you were there, on the 3rd. Had to go and see Bob’s show.

Glad you decided to do a report. Looking forward to more!

Premium Member
Oh, my goodness! I'm so excited about this TR. I was quietly waiting and hoping for you to decide on writing one!

Premium Member
I'm in for the fun!
O

I AM VERY MUCH PRESENT !

Premium Member
Woo Hoo!! I’m so glad you decided to do one!! Looking forward to it!!