Hi everyone! After being a trip report lurker for the past year or so, I thought I'd take a shot at my first trip report - if only to help preserve the memories

That's one of the "firsts" referenced in the title.

A little introduction: My name is Jenna, I'm 28 and live in Minnesota. My first Disney trip was over spring break when I was 8 years old with my parents, younger brother, aunt, uncle, and 3 cousins. I, of course, loved it, and always dreamed of going back. Enter my husband, Ethan (E). On our first date, Disney World came up and he told me about how his aunt worked for Disney and she was able to get family members into the parks for free! I'm not saying I married him just for that perk

but it certainly piqued my interest... In 2019 we took our first Disney trip together for our first anniversary/honeymoon and we just knew that Disney would be "our" place (and yes we were able to take advantage of his aunt's passes before she retired this year!) 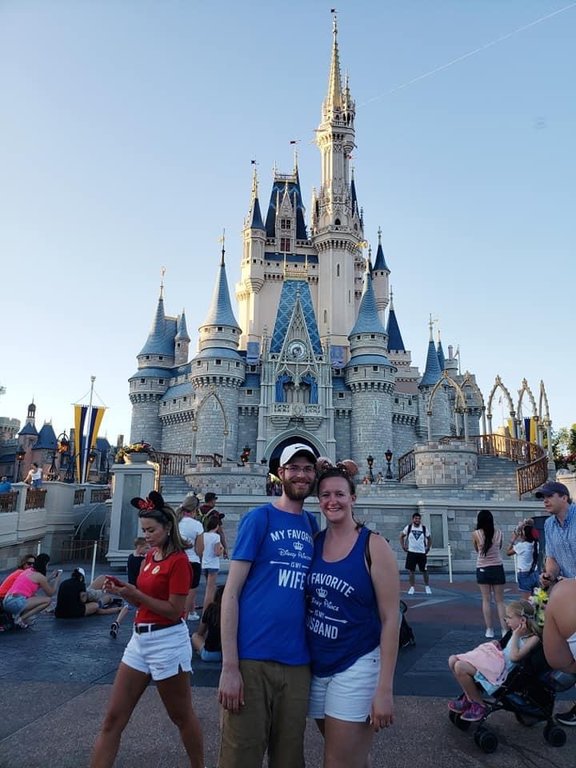 Fast forward to 2021, and we are expecting our first baby! With whispers of vaccines coming and the world opening up again, we decided to take a babymoon trip. We tried to come up with more "relaxing" locations to go, but Disney just kept popping up, so after reading lots of blogs about going to Disney World while pregnant, we decided to bite the bullet and booked our Disney Babymoon - which also coincided with our third anniversary! We decided on only going to Magic Kingdom and Epcot, since there is not a whole lot I could do at Animal Kingdom and Hollywood Studios (and I sure as sugar wasn't going to let Ethan experience ROTR or Smuggler's Run for the first time with out me

(this never happens for me)

Looking forward to hearing about the trip (and reading your first TR!)

Congratulations on the soon to be newest addition to the Disney family!

I cant wait to hear about this, and Congrats

Following along and congratulations!

What part of MN are you from?

In and looking forward to reading about your adventures!

Congratulations! Looking forward to following along!

Premium Member
Congrats and yay! (Glad to have more TRs to read as my amount of couch time increases.)

Congratulations!!! Can't wait to hear about all the fun! I hope you guys had an excellent trip!

(this never happens for me)

Looking forward to hearing about the trip (and reading your first TR!)

Congratulations on the soon to be newest addition to the Disney family!

MotherofaPrincessLover said:
What part of MN are you from?
Click to expand...

Dave B said:
I cant wait to hear about this, and Congrats
Click to expand...

KellBelle said:
Following along and congratulations!
Click to expand...

fizzieee said:
Congratulations!!! Can't wait to hear about all the fun! I hope you guys had an excellent trip!
Click to expand...

Thank you all so much!

Back!Elbow!Shoulders! said:
Congrats and yay! (Glad to have more TRs to read as my amount of couch time increases.)

I'm getting to that point as well

Congratulations to you too!

Our first day was almost solely a travel day, so I'll try not to get overly detailed!

Our flight was leaving MSP at 9:15am so my dear brother-in-law/personal taxi service was at our home at 6:30am to pick us up. I was nervous about security wait times, as my friend had flown about a month before and it was a zoo even early in the morning! Thankfully we were through security in about 20 minutes - even with E getting stopped by security! It's been a running joke that he must look sketchy because security always does an extra search of his bag, but it's really just because he always forgets something that should have been taken out of his bag haha. After verifying that our battery pack was, indeed, just a battery pack, security let us go and we hopped into the Starbucks line. E is a bona fide caffeine addict so this was a necessary stop for him, but coffee's been my top aversion during pregnancy. I got a "medicine ball" tea at the recommendation of a friend (I never go to Starbucks!) and it was really good!

Delta was still blocking middle seats on our flight (if only that could be permanent!) so we had a row to ourselves! The flight was uneventful and we landed at MCO right on time. We didn't check any bags, so we stopped for a snack and water break because this preggo can't make it half an hour without eating, put our masks back on, and called an Uber. Our driver was great, coming around to help with our bags. As we made small talk on the way out of the airport, he pointed out a construction area, telling us, "That's the new Disney terminal!" I remember hearing about an MCO to Disney Springs train that is in the works, so I asked, "Oh, for the train?". He replied that no, Disney was going to have it's own separate terminal, so people coming on Disney trips would land right at the Disney terminal and get on Disney transportation from there. This didn't really seem realistic to me so I just replied, "Oh interesting!" Does anyone have insight into this? We've assumed he's misinformed but hey, what do we know?

We got to the hotel at 2:30pm and our room wasn't ready yet, so we dropped off our luggage, and walked across the street to get some late lunch at Pei Wei. I was surprised my orange chicken sat well with me, since pregnancy has changed my taste A LOT. After eating, we went to the Walgreens next door so E could get some adult beverages. I had ordered a grocery delivery from Publix via Instacart, but it was going to be $8 to get a delivery from Total Wine! Knowing this Walgreens had a liquor store, we decided to just get drinks here instead since $8 effectively doubled what we would have spent! By this time, Instacart was letting me know that my delivery would be there soon, so we headed back to the hotel lobby. It was 4pm by this point, so we checked to see if our room was ready - no cigar (even though check in time is at 4...) We sat in the lobby with our luggage and groceries, waiting for them to let us know our room was ready. At 4:30, we were told, "Well it says it's clean in the system, but we need to have someone check." Being pregnant, hot, uncomfortable, and tired, I was NOT amused. E was the designated liaison between us and the front desk since I knew I couldn't be gracious. 45 minutes later, our room had finally been "checked", so we asked for a luggage cart since between our bags and groceries it was way too much for us to carry on one trip. We were told there wasn't one available. Ethan took all 4 of our bags (small carry on bags but still!) by himself to the room while I sat with the groceries. Not 1 minute after he was out of the lobby, a blonde wearing only leggings and a sports bra asked the front desk for a luggage cart and one was wheeled out for her! I remember thinking, "Hey, I'll take my shirt off if it means I can get to our room faster!" (though I'm sure it wouldn't have the same effect with a big pregnant belly). Ethan came back, we loaded up like pack mules, and we were finally in our room.

I won't say much about the hotel, although I could, but this should be a happy place of happy memories. Let me just say - don't stay at the Grand Orlando Resort. We stayed here for our 2019 trip and it was a night and day difference to this trip. In 2019, our room was clean, beautiful, and updated, and our only problem was we didn't realize they had a DJ playing music at the pool on weekends which we could hear in our room. This year, our room was... NOT clean or updated, and we had a lot more problems than music! I'll leave it at that. I forgot to take pictures of the room (I'm not in the habit!)

I unpacked everything (does anyone else do this? I hate living out of suitcases!), and we took a much needed nap. We were too tired to go anywhere for dinner so we enjoyed our millions of snacks while watching Netflix - that's what happens when a pregnant lady makes the grocery order! We went to sleep in preparation for our day at Disney Springs tomorrow!

Hope all goes well ... yea the MCO thing and Disney ... seems weird since anyone can take any carrier and not all persons on each plane will be heading to Disney .. so I'm with you .. Yes they are building the NEW concourse for the Train but this will also be an extension of MCO for growth.. https://www.orlandosentinel.com/new...0210519-l7k7kamtmbd7nc45bn2patvstm-story.html

Too bad the hotel room sucked.

38053WDW said:
Hope all goes well ... yea the MCO thing and Disney ... seems weird since anyone can take any carrier and not all persons on each plane will be heading to Disney .. so I'm with you .. Yes they are building the NEW concourse for the Train but this will also be an extension of MCO for growth.. https://www.orlandosentinel.com/new...0210519-l7k7kamtmbd7nc45bn2patvstm-story.html
Click to expand...

That makes a lot more sense. Thanks for the link to the story!

Late -but following. Thanks for tip on hotel. Noise is one thing, but not clean..