Original Poster
This will most likely be a very long post and will probably split the post. I am wanting to talk about everything with in my opinion, the worst era of the ToT from May/June 2008 to March 2015 as it was just a massive audio mix-up test when the audio was converted to Solid State. I have been studying this over many months to understand it fully.

First things first, have you ever wondered during this period why on Delta the ding approaching the hallway scene played so early? It turns out that Delta originally in 2008 had a completely different narration line timing to it. Here is a rare video of Delta during this time:
That's right, in Delta's original 2008 solid state audio programming, the narration started right as the CM hit the dispatch button, and the 5th dimension transition narration started a few seconds BEFORE the window even shattered. With this original timing, the ding actually fit in as it was positioned to ding between the words "episode of" and "the Twilight Zone". When they changed the narration timing, the ding timing for the hallway scene wasn't changed with it.


History​
This era has a LOT of complex history to it. The earliest video I can find of this era is from June of 2008, however the change could of happened in late May as well. Looking at the videos of Alpha, Bravo, and Charlie from 2008, they seemed to have the same audio programming as later years(Besides Alpha partially but I will get to that later).

-In Summer of 2008, they reverted the system back to the Laserdisc(Unsure if this is the audio system it had before) for some odd reason and stayed until October of 2008 where it would be changed back to the solid state system permanently.
-In very late 2008 or early 2009, Delta's audio programming was modified like stated earlier so the narration was properly timed and the narration for the 5th dimension transition didn't start until the BGM started.
-In October 2011 Alpha's audio programming was modified. The narration was changed to play Bravo's/Charlie's narration version, the ding was slightly repositioned for the hallway scene, and the 5th dimension transition audios started immediately after the hallway scene BGM finished.
-In April 2012 the door motors have all been changed(besides the Horton doors) to run on VFD's(Variable Frequency Drives), this is the "UFO" type sound you hear when the doors move. Since these moved slightly slower over the previous direct drive motors, the timings changed, and it made Delta more closer to perfect sync at the hallway scene(more closer later). They also changed the timing of the start of the 5th dimension transition for Delta to start after the glass breaks.
-In late 2013, the timings for stuff was changed by another second, I don't know if this was from a refurb on the motors or a change in programming, however it made Delta perfectly on sync for the hallway scene.

If it wasn't evident before, for both the SFX, BGM, and narration tracks, there is a variation of it for Alpha/Delta(A/D) and Bravo/Charlie(B/C). Here is a chart for what variations each ascent shaft played:

Original Poster
Advertisement
Quirks/Oddities​
If you didn't know already, the 5th dimension transition audio during this period is entirely as I call it "forcefully timed" which means that the audio would always start at the same position, whether or not the 5th dimension was actually ready, and the ding was positioned with the audio instead of when the VVC arrived at the 5th dimension level. On Bravo, Charlie, and Delta, the ding was positioned rather earlier and on Alpha the ding was positioned in a good spot, however until the door motors got changed and the audio start got changed, this ding would play a few seconds after the doors opened(Later on this positioning worked better because it played as the doors were starting to open). If there was a hold up, things would get messy.
I am not sure how this happens, it's another mystery with the Tower's programming, but if enough time passes after the ding plays to when the 5th dimension scene actually starts, the ding sound plays a 2nd time, likely from the original 5th dimension transition programming which was probably masked by the "forceful timed" one, and I will get back on this later on what makes this theory more possible. This happened almost all of the time on Bravo, and after the door motor change, it happened all of the time on Charlie too. I have seen it happen a few times on Delta but only because of a holdup occurring, I don't think this happened with Alpha because its ding was timed so far out. Now if the holdup takes even longer and the VVC doesn't start to head up until the 5th dimension transition audio is mostly finished, it will cause the dispatch to hallway scene audio to start again. This furthers the possibly of my theory being true about the original transition audio programming being masked.


Aftermath​
With the refurb in March of 2015, the mix-up was no more and Charlie and Delta were reprogrammed and corrected. Martin was wrong saying the refurb was not good, this was a needed change as the mix-up tests were going on for too long, especially Charlie.
Starting with individual changes, Alpha's narration track was changed back to the Alpha/Delta variation. With Bravo, nothing really seemed changed besides what I will talk about with the changes across all of them. Charlie essentially had its 2008-2015 programming removed and received a copy of Bravo's audio programming. Delta's programming seemed like it was scrapped too with the programming for Alpha copied over with the exception of the door close sound playing a second after the window shattered, but I will get back to that in a little bit.
For changes across all shafts, the ding was positioned in a more nice position for when it comes up to the hallway scene. The "forced timing" of the 5th dimension transition audio was removed and now it checks when the 5th dimension is ready before it starts the audio. The ding is also now timed to when the doors start to open at the 5th dimension floor. What's interesting though is that with Bravo(and Charlie) is that the transition audio sounds almost the same besides the ding position change, its like they kept the original 2008-2015 starting position for the transition audio but just added in the 5th dimension check, more on this in a bit.
One flaw which I am surprised they didn't change was that Bravo played the Alpha/Delta variation of the SFX track, and this was copied over to Charlie and was never changed back to the B/C variation. I don't mind it really because the thump sound plays right as the doors start to open at the hallway scene, so it matches still.
One thing I didn't like is the timing for when it starts to check if the 5th dimension is ready. On all of the shafts, even if the 5th dimension has been ready for a while, the 5th dimension transition audio does not start until the doors are more than halfway closed. Unless there is a limitation in the programming(which I doubt), they could of easily made it check as the window shatters or when the doors start to close.
Last thing I want to talk about is the door close sound. Every shaft besides Delta(partially) has messed up timing for this sound effect. On Bravo in 2008-2015, the door close sound was moved to play with the start of the 5th dimension transition audio and not with the hallway scene programming. When the 2015 refurb came, this wasn't changed so it still only plays once the transition audio starts. In Alpha, this sound doesn't play at all for the hallway scene. Delta is the only shaft where the sound is with the hallway scene programming, but it plays a second too early.

That's all I wanted to talk about, my next topic soon will either be the complete full history/changes to the ToT or about the speakers.

Thanks, I enjoy all things Tower!

Great write up. I didn't realize all the shafts needed individual timings for their scenes.

So, who go the shaft?

Call me silly, but as far as I am concerned there were NO bad periods of ToT. They have added more, but that doesn't take away from what the original gave us.

I continued enjoying it despite the audio alterations described and quite frankly never noticed enough of a problem to affect my enjoyment of the attraction. Maybe I was too focused on having fun and not on how the ding was timed.

vicariouscorpse said:
Great write up. I didn't realize all the shafts needed individual timings for their scenes.
Click to expand...

The hallway scenes are staggered within pairs of shafts. So for Alpha/Bravo, when you leave the boiler room one goes up one floor to the hallway scene, the other goes up two floors. Then when those scenes are done, you have either two floors or one floor left to go up to 5th dimension. Because of the differing travel times between scenes in the two shafts, each *should* have its own soundtrack timing for those scene transitions to give the best experience. Those timings can then be copied to the other pair of shafts.

JIMINYCR said:
I continued enjoying it despite the audio alterations described and quite frankly never noticed enough of a problem to affect my enjoyment of the attraction. Maybe I was too focused on having fun and not on how the ding was timed.
Click to expand...

It wasn't the ding that was the main problem. It was the BGM for the hallway scene that was main problem. Delta in its last few years was almost perfectly in sync(due to it playing Charlie's soundtrack), however Charlie was HORRIBLY off sync. Hopefully these two videos show the different well and how bad Charlie was.
Delta:
Charlie:

vicariouscorpse said:
Great write up. I didn't realize all the shafts needed individual timings for their scenes.
Click to expand...

Rob562 said:
The hallway scenes are staggered within pairs of shafts. So for Alpha/Bravo, when you leave the boiler room one goes up one floor to the hallway scene, the other goes up two floors. Then when those scenes are done, you have either two floors or one floor left to go up to 5th dimension. Because of the differing travel times between scenes in the two shafts, each *should* have its own soundtrack timing for those scene transitions to give the best experience. Those timings can then be copied to the other pair of shafts.

Hopefully this sketch that someone drew sometime helps illustrate it 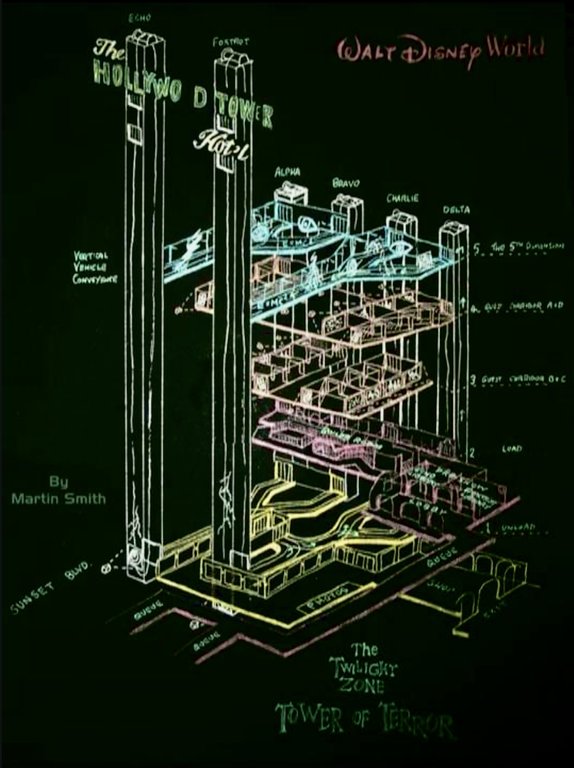 marni1971 said:
Hopefully this sketch that someone drew sometime helps illustrate it
Click to expand...

Ahh, I remember this now, some details I forget. That sketch is very cool. Someone should let the artist know.
You must log in or register to reply here.