Original Poster
Hello, all! Our next flight to MCO will be on JetBlue, which uses the new Terminal C. I've been staring at the "wayfinding" diagram and am having trouble making heads or tails of it. I swear, I'm not a totally inexperienced traveler, but for some reason I'm just not "getting" what I am seeing. If anyone can educate me, I'd appreciate it. I've been hoping somebody would do an arrival walkthrough video (there are dozens of them online for the older A and B terminals), but nothing so far. All the videos seem fixated on the Palm Court on Level 2 (which makes sense: they're generally local bloggers who are heading somewhere, and not people arriving from elsewhere).

First, arrivals are on Level 6 and departures are on Level 2. Logistically, how does that even work? I feel like every airport I've ever been to has had arrivals and departures on the same floor, using the same gates: if they were on different floors, that fact went [wait for it] over my head. Is this just a matter of each plane letting people off on Level 6, and then cranking down the jetway a whopping 4 floors to let the next group on?

Second, Terminal C will mostly be international passengers, with Level 6 occupied by Customs and Baggage Claim, which according to the diagram both span the entire level. We'll be arriving on a domestic flight with no checked baggage, and will want to head directly to the elevators or escalators so we can either get to Level 4 (for the Terminal Link) or Level 1 (Grand Transportation), depending on our ground transportation plans. It looks like the only ways down are on the other side of Customs. Will we be able to bypass Customs in some way, since we're domestic travelers, or should I be building in extra time to stop and prove our citizenship? 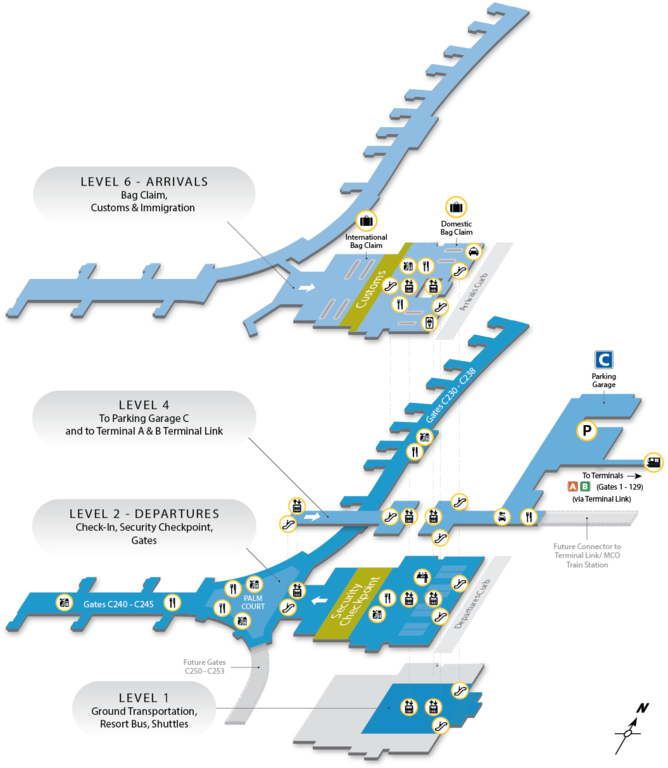 The gates have a way of sending passengers from international flights upstairs so they can go to Customs while remaining isolated from everyone else. As a domestic passenger you’ll exit the gate on Level 2. You’ll go up to Level 6 to get checked luggage instead of going downstairs like you do at Terminals A and B.

lazyboy97o said:
The gates have a way of sending passengers from international flights upstairs so they can go to Customs while remaining isolated from everyone else. As a domestic passenger you’ll exit the gate on Level 2. You’ll go up to Level 6 to get checked luggage instead of going downstairs like you do at Terminals A and B.
Click to expand...

THANK YOU! I kept reading everywhere that Level 6 was "Arrivals," and was blindly assuming that this meant everyone would be arriving there, regardless of where their flight originated. This makes way more sense.

So really, our procedure won't differ from what we'd do if we were flying into Terminals A and B as usual (minus the need for a monorail ride). We don't check bags, so we'll just need to walk from our gate, through the "restaurants and restrooms" concourse, head around security and follow signs to get down to ground transportation...
Last edited: Nov 22, 2022
Share:
Facebook Twitter Reddit Pinterest Tumblr WhatsApp Email Share Link