Area for re-development. Bathrooms and store will remain, althought drastically rethemed. Will all still be dino based. More grounded in reality.... Digging up the plans for this one. 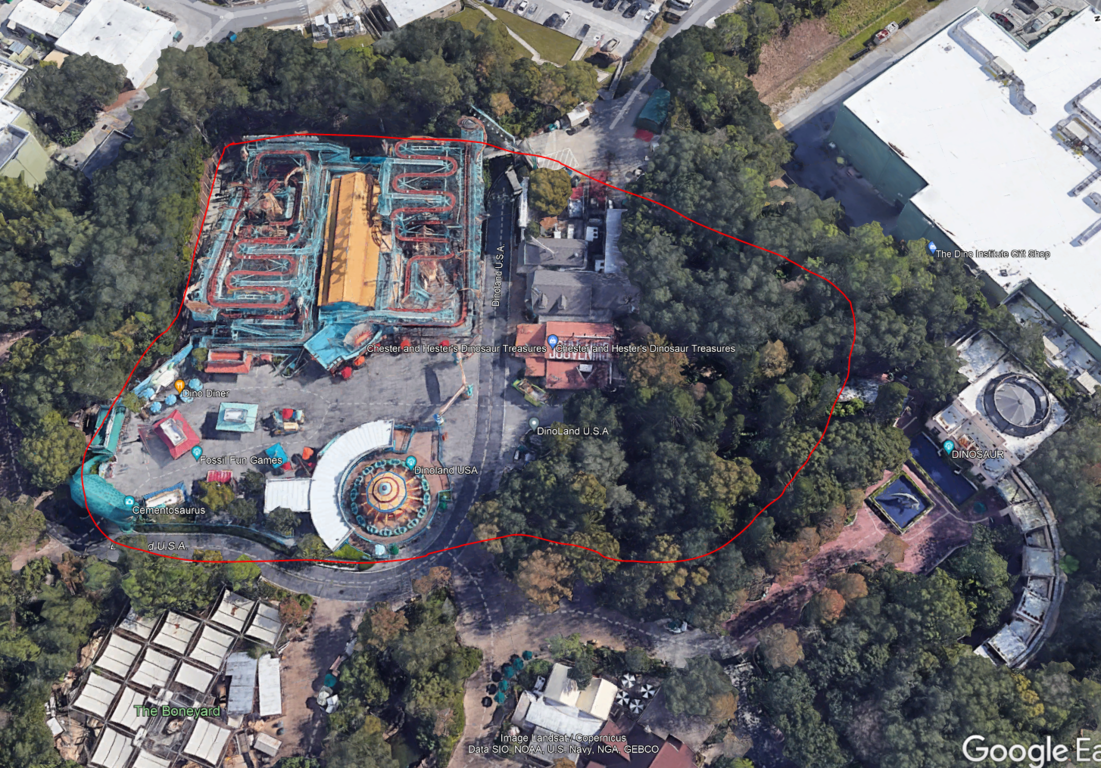 I don’t believe this is the plan, but (probably contrary to popular opinion), I wouldn’t be mad if Prime just got replaced by a better flat ride package more akin to Paradise Pier. Maybe some swings, a Heimlich-esque outdoor dark ride, etc.

Honestly, I say we have a Dinosaur movie spin-off based on both the attraction and the 2000 movie. Have a scientist working at the Dino Institute go back in time via a Jungle Cruise-style adventure movie, with the time rover... To capture Aladar and other dinos, to bring them back to the Dino Institute. Then get it propped up and ready for a sequel about the dinos breaking out of the institute...

Then voila, a whole land themed to Dinosaur, the attraction, and a spin-off movie/sequel. There's a whole lot you could do with a land like that, with the idea that a bunch of (friendly) dinosaurs have escaped... Freely roaming around the land, invading a restaurant, ect.

Magic Feather said:
While not finalized, Prime's replacement is DAK's next major-ish project. They had some huge dreams for the plot, but they appear to be shrinking. Original plans were for an E, now I'm not so sure. Construction for the replacement itself though likely won't begin for over a year. I could see this being a good d23 '22 announcement though.
Click to expand...

Do you think it could get an announcement at Destination D this November?

Karakasa said:
Both Ta Lo and a Raya attraction would fit in well with Asia, that's for sure. I'd personally not mind a "Beastly Kingdom" based less around European folktales and more on myths from Africa, pre-colonial Americas, Oceania and of course Asia. Lot more unique to explore there. Could of course squeeze in a walkaround unicorn or something like that, though.

I'm however kind of against a Nemo land in Animal Kingdom because... there's already a Nemo land, in Epcot. TotW does kind of stick out like a sore thumb, being neither particularly Asian or prehistoric, which is unfortunate. Maybe the current updated Nemo is a stopgap until they can figure out something to do with it? Removing Primeval Whirl does seem like a good time to try to retheme Dinorama, if ever, and using the land TotW is on could make room for more Dinoland stuff. In particular, since Disney is going on ahead with making more media pertaining to Ice Age after the Fox acquisition, they could easily put an Ice Age themed ride in there, then say Dinoland is less about only dinosaurs and more about prehistory in general. I'd sooner prefer Ice Age in Dinoland than Indiana Jones or a Zootopia replacement, anyway, lol.

Sidenote... Kinda tired of the Donald theming going on in Dinoland right now. It was fun for the 20th anniversary of AK, but it's overstayed its welcome at this point.
Click to expand...

I agree a Ta lo or a Raya ride would be awesome! Since Shang Chi is doing really well I would love to see a ride based on the movie.

The village where Shang Chi and his family are from. The Mandarin's whole plan involves the village. Definitely go see the movie if you haven't yet.

Something that I thought up when listening to your AK Marty Called episode would be a Prehistoric Jungle Cruise.

I know it's not practical -- but transplanting some of the attractions from the demolished Bug's Life land in DL might have been a cost-effective short-term solution. I would've had no problem with that.
Last edited: Sep 23, 2021

I think the best thing to replace Dinorama would be some sort of prehistoric jungle subland or something like that. I'd be fine with them turning it into an Ice Age-themed subland instead, though.

doctornick said:
It would be cool if they had some version of It's a Bugs Land or something similar
Click to expand...

Honestly, a new version of A Bug's Land wouldn't be too bad an idea. If nothing else, it'd add capacity and give us an excuse to finally give It's Tough to Be a Bug the axe.

Premium Member
Isn't DINOSAUR the meet-the-dinosaurs ride? Why are people proposing a second one right next to it?

Bring on the Excavator PLEASE 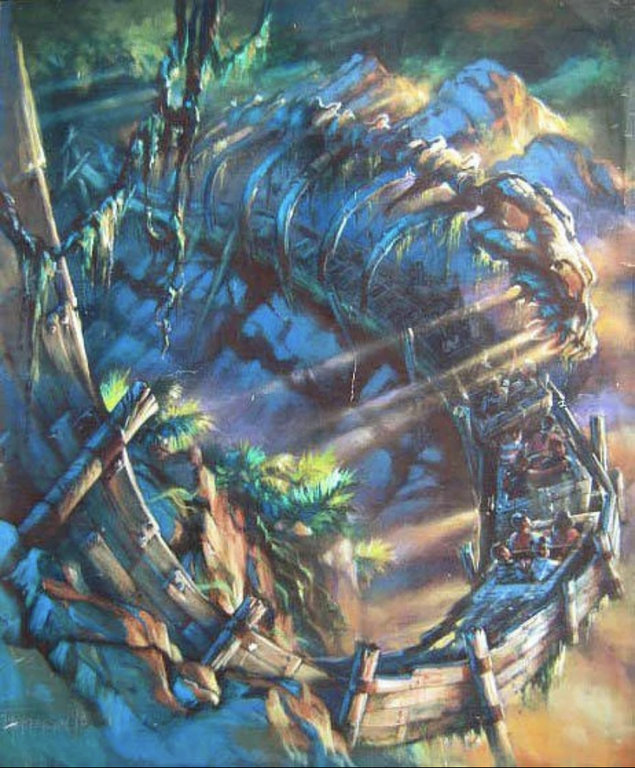 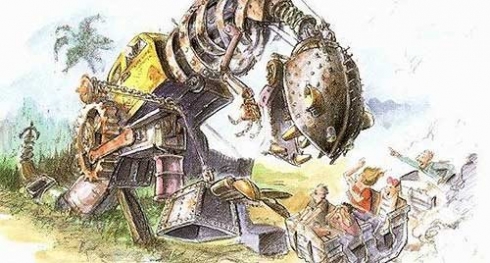 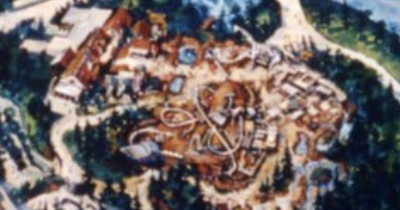 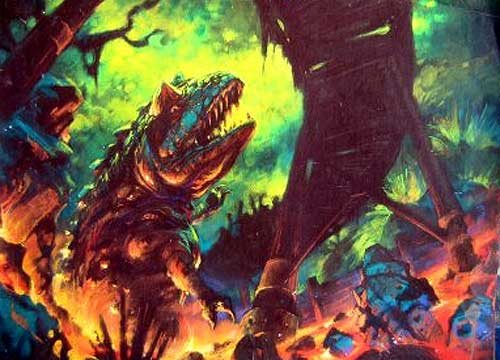 If they continued the excellent dig site theming of the boneyard over to where dinorama is right now, Dinoland would be instantly redeemed

This would be awesome, but perhaps another 48-inch height requirement ride isn’t the right call? It’s a really cool concept, however.

MansionButler84 said:
This would be awesome, but perhaps another 48-inch height requirement ride isn’t the right call? It’s a really cool concept, however.
Click to expand...

Ideally I would like this to be somewhere around the intensity and height requirement of SDD, but with much much much better theming. If Everest is this parks thrill coaster, Excavator would be the pure family coaster.

999th Happy Haunt said:
Ideally I would like this to be somewhere around the intensity and height requirement of SDD, but with much much much better theming. If Everest is this parks thrill coaster, Excavator would be the pure family coaster.
Click to expand...

I don’t gather that was the original concept but sure. My thinking is more akin to the Incredicoaster layout, which is a fantastic coaster.

Premium Member
I agree with the busbar crowd. Park really needs one. Seeing the Excavator brought here would be sweet but a family friendly retooling of that concept would be better, I think. A few steps above Slinky Dog but not as intense as Everest.

999th Happy Haunt said:
Ideally I would like this to be somewhere around the intensity and height requirement of SDD, but with much much much better theming. If Everest is this parks thrill coaster, Excavator would be the pure family coaster.
Click to expand...

Yeah that makes the most sense.

Magicart87 said:
I agree with the busbar crowd. Park really needs one. Good as place as any. Seeing the Excavator brought here would be sweet but a family friendly retooling of that concept would be better, I think. A few steps above Slinky Dog but not as intense as Everest.


Yeah that makes the most sense.
Click to expand...

What is a busbar?

dreday3 said:
What is a busbar?
Click to expand...

Is it...the ride system itself? Like Mr. Toad type ride?

dreday3 said:
What is a busbar?
Click to expand...