Hello all! This trip review will be mostly text as I did video most of the trip and didn't take pictures. Here are the basics of our trips:

Who: Myself, Emily and Nate both in our late 20s living in Massachusetts.
Why: We were traveling to Kentucky to adopt a dog on July 5th. We already had 2 trips canceled and decided to take a 3 day trip to Orlando beforehand to use up our universal tickets.
When: July 1st-5th.
Where: We stayed at Universal's Aventura Resort.

What did we do:
- One day of Universal/ Islands
- Disc Golf at Turkey Lake Park
- 4 Trips to Disney Springs (AKA Try all the foods!)
- Fantasia Gardens Mini Golf
- Kona Cafe

Updates and linked videos to come 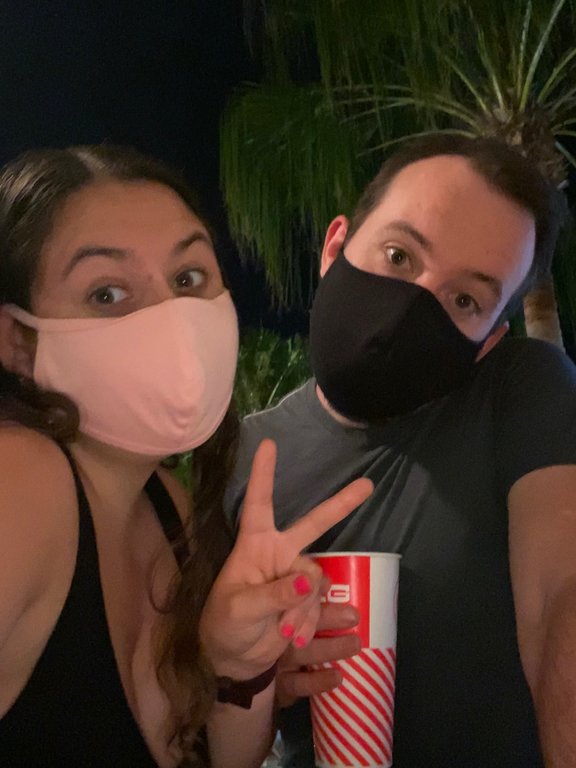 We arrived at the Providence, RI airport around noon. Security was a breeze as well as the Southwest counter. Bags were checked and we were through security within 10 minutes! Now we had to find something to eat. The only thing open was Dunkin Donuts in the entire airport. Bacon and cheese sandwiches and coffee and we were ready for our flight. 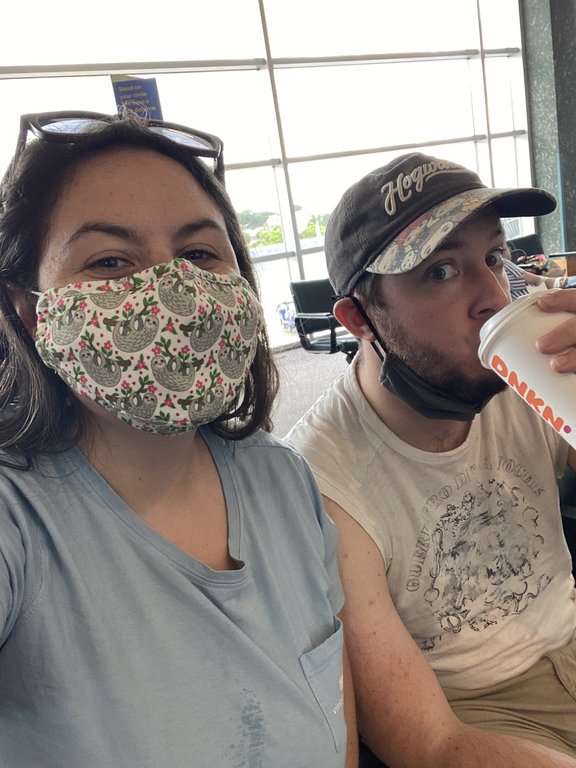 Soon enough, Southwest announced boarding. This flight had similar protocol to previous flights however when 30 numbers were called at a time, it didn't matter how you lined up, you just went up, scanned your tickets, and boarded. On the flight, all middle seats needed to be open unless the person sitting in the middle was part of your travel party. We cleaned everything in our area and a flight attendant came by to collect all our wipes. We still got a snack on the plane but the only drink option was water. This was the fastest flight I ever had to Florida and after 2 hours, we had landed. 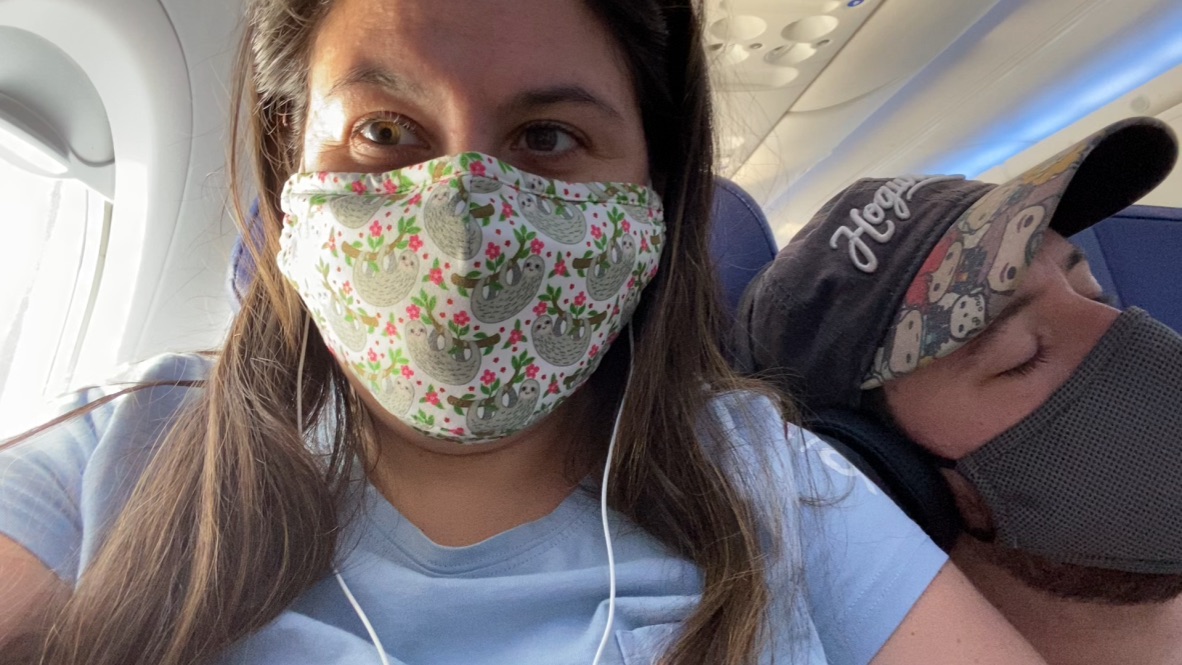 When we landed in Orlando, about 60% of the airport was open. Some retail shops were still closed but most of the food options were open. We boarded the fake monorail, picked up our rental car, and we were on our way to Aventura! 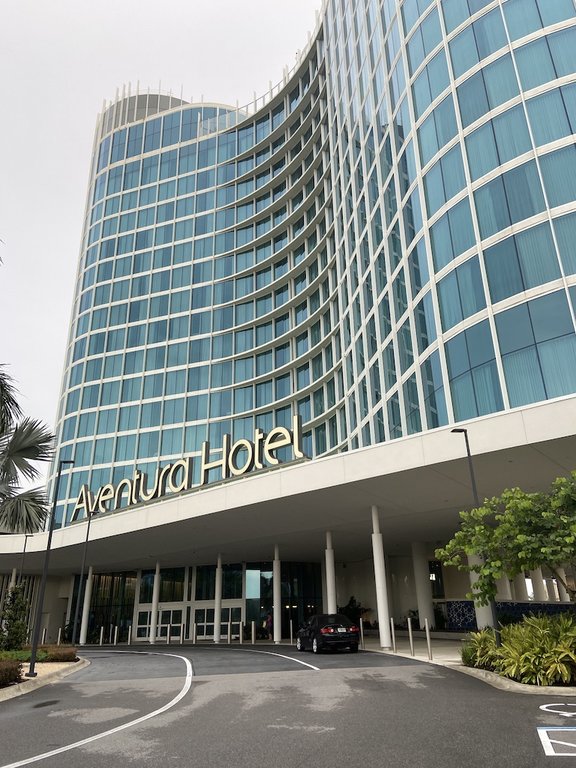 Guys we need to talk about Universal Hotels. I love my Disney hotels but the value at the Universal hotels is great. This hotel was amazing for two adults with the rooftop bar, great food, and guaranteed park entry with the early access for resort guests (more on this tomorrow). We also got our temperature check and received our good band. Each day, you needed to get your temperature checked. Once you were checked once at the hotel, you were good to go across Universal property and did not need to get re-checked. Another really cool thing was each room had a tablet that controlled everything. From lights to the tv, it was all in one place that was cleaned and had additional wipes and hand sanitizer right next to it. We quickly dropped off our bags and headed back in the car for Disney Springs.

After walking most of Disney Springs, we decided on eating the classic Earl of Sandwich for dinner. Hardly anyone was there which was amazing. We then left Disney Springs and went back to our hotel. Another great thing about Universal hotels is that the pools are open until 11pm with lifeguards! Nate went for a night swim and I relaxed in the room. Day 1 complete. Tomorrow we enter a park!

We were up bright and early to get to Universal for early hours. The park was scheduled to open at 9am but for hotel guests, it opened at 8am which basically guaranteed your entrance into the park. This is something I wish Disney would have considered instead of the "reservation system". We were out of the hotel by 7:20 and were the 4th car to park in Kong. Since we got our temperature checked at the hotel, we got to bypass that line and we were in City Walk! 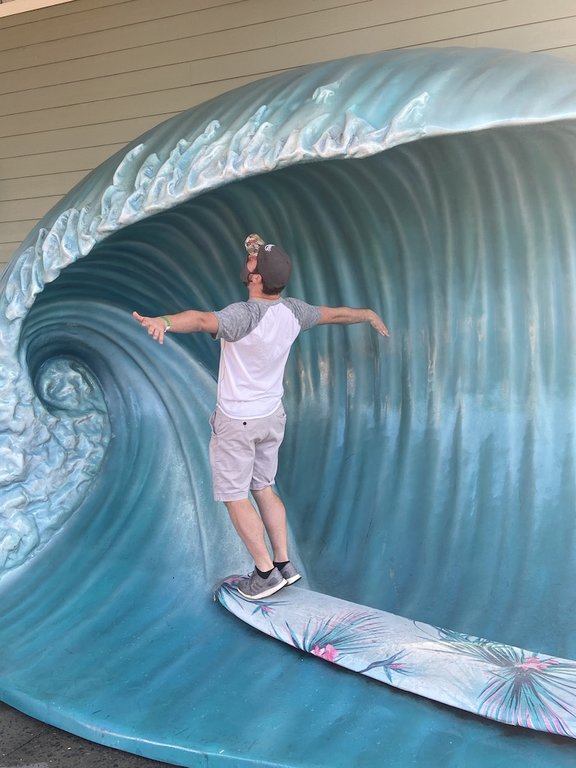 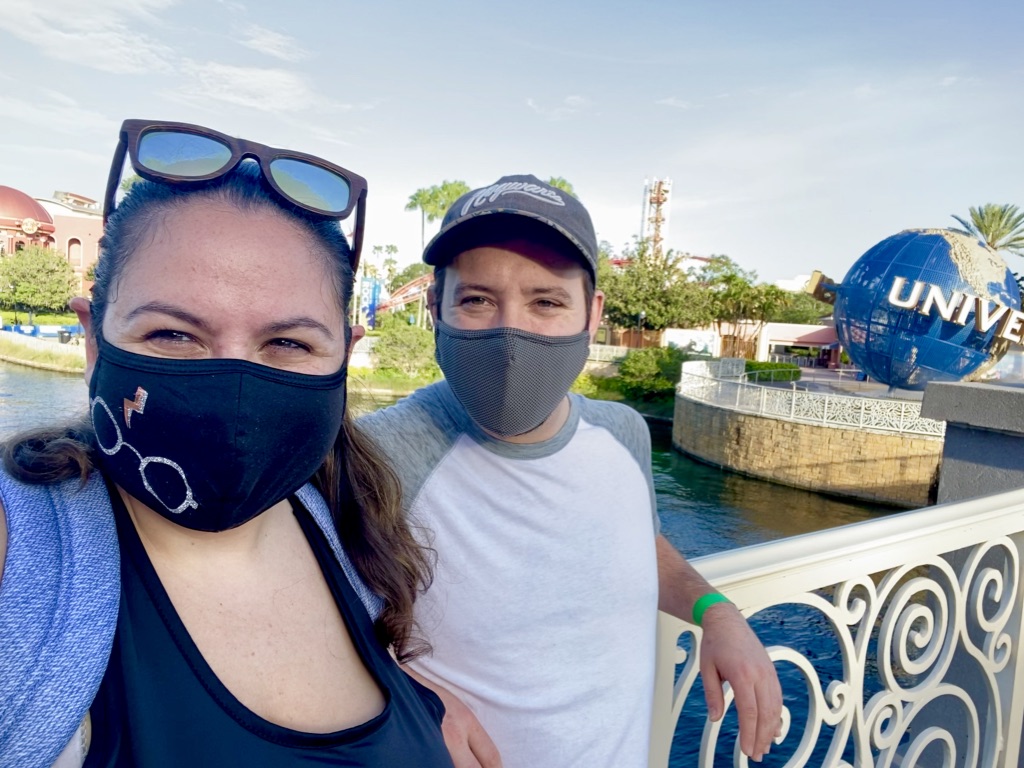 After a quick wait at customer service for my annual pass, we were in the park! The first stop was Starbucks. I took a picture of the empty streets as we made our journey over to coffee. 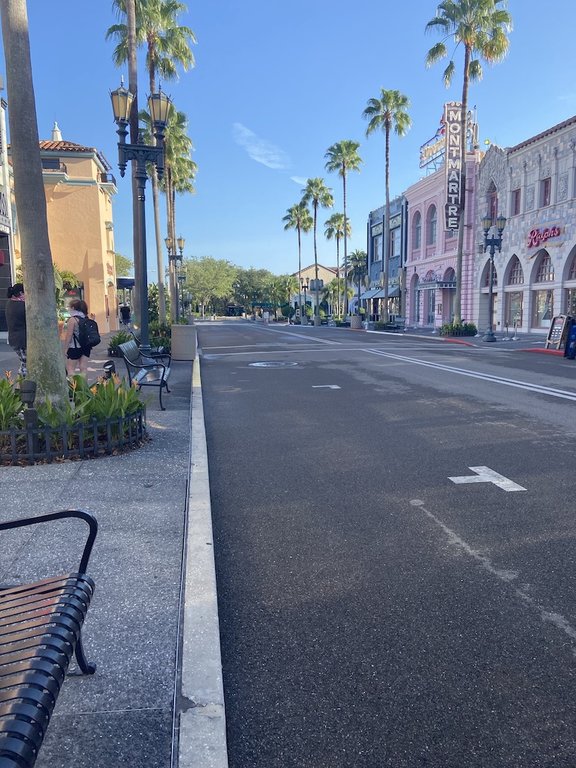 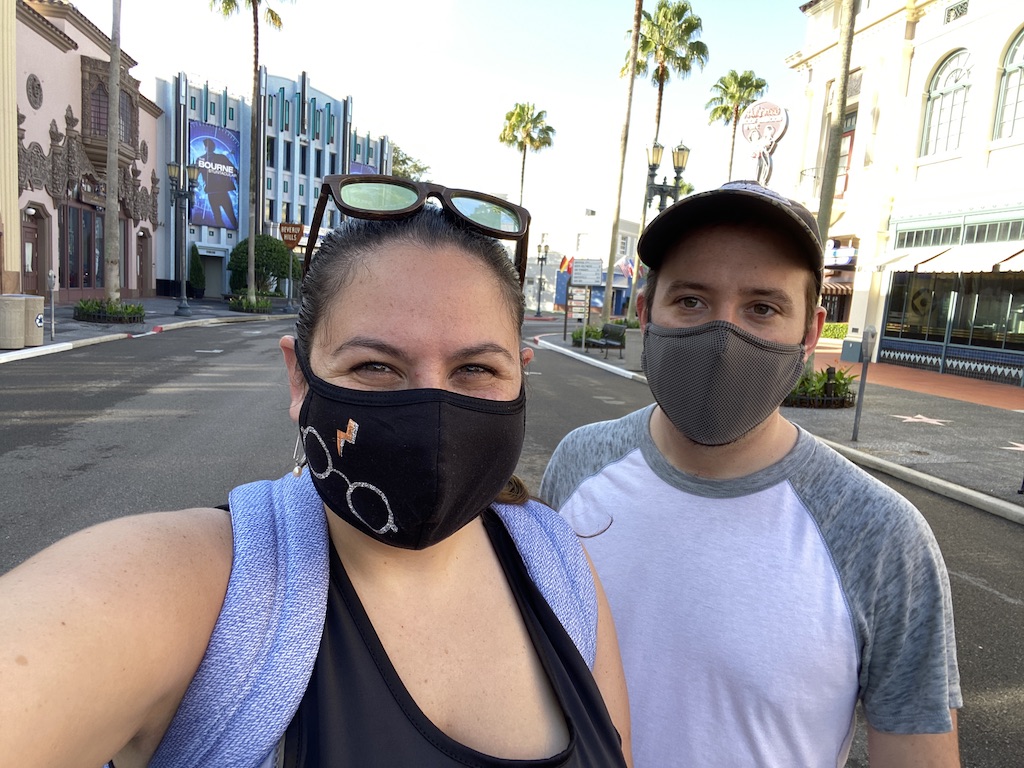 When entering Starbucks there was hand sanitizer right at the entrance. I sanitized my hands as soon as entering but Nate did not. He was immediately told to go back and sanitize before ordering (gotta keep that boy in line lol). This was our first taste of how clean everything was going to be. Team members were constantly watching to make sure everyone was being safe.

During early hours, Diagon Alley was open. We decided to cast some spells while finishing up our coffees. Nate had never been to Universal before so we really spent some time soaking everything in with low crowds. 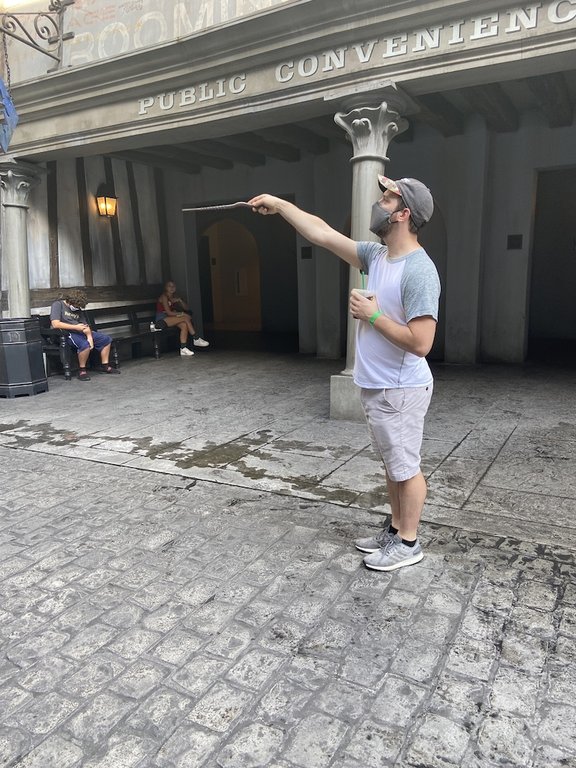 First ride of the day, Gringotts! Wait time was posted at 45 minutes but we were on in 15. Team members were assigning lockers to each party (only one person could go in to get a locker from each party). This is something I think should always happen. It made the lockers at Universal so much easier to navigate. Everyone is line stayed the 6 feet apart and listened to the rules. 3-D Glasses were handed to us before boarding and Team Members were boarding one party per row, skipping rows. 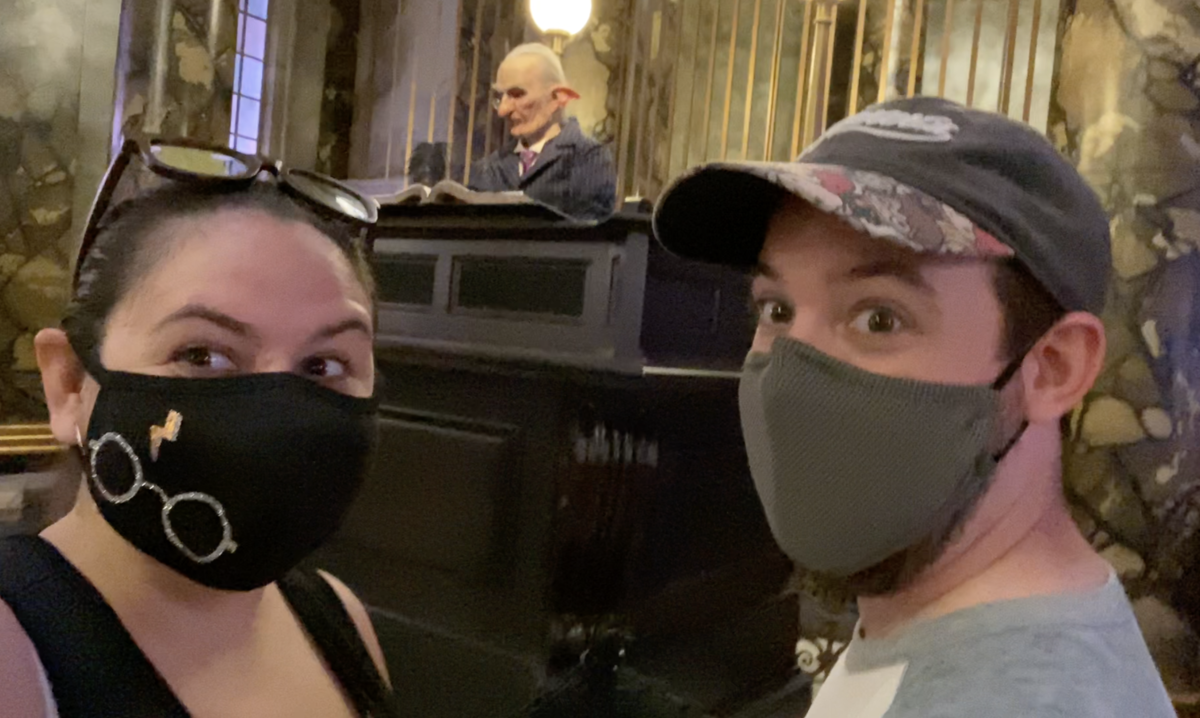 Nate loved Gringotts! We decided to upgrade to the Mummy next. As we were walking over to the Mummy we got a Hagrids virtual queue! The mummy is way faster with fewer people on it. This was my favorite ride in the park before and still holds a top spot! Nate liked the Mummy but liked Gringotts more. We had about 40 minutes before our Hagrids pass so we headed over to the Hogwarts Express. 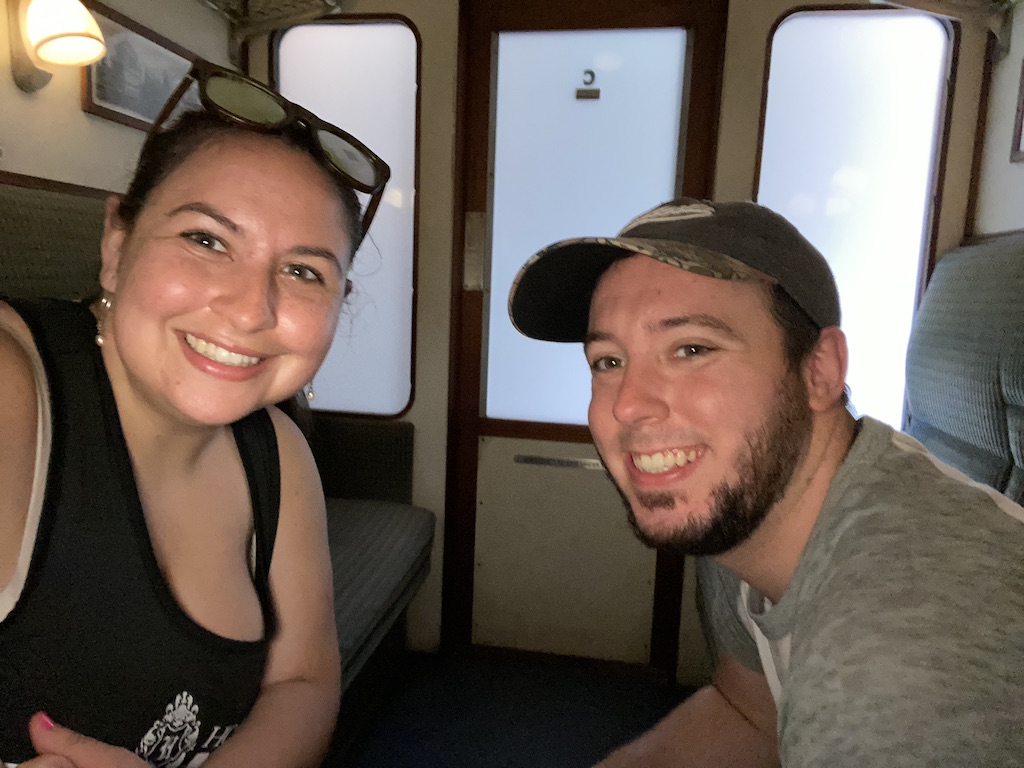 Hogwarts Express was boarding one party per cabin. As soon as the door closed we took a quick "no masks" pic. Universals' untold rule seemed to be you can take your masks off for a quick picture when you are able to social distance. We didn't do this often but it was nice to have a couple of pictures without masks on.

Getting off the Hogwarts Express was one of two anxiety moments throughout the day. The exit of the Hogwarts Express, entrance for Hagrids and the lockers all together makes for a very congested area. I'm talking like Festival of Fantasy coming down Main street and you are trying to walk down congested. There is no way to social distance here. We powered through the crowd quickly and went into the virtual queue for Hagrids.

The line ended up being maybe 10 minutes which was basically just walking through the queue. WOW. This is an amazing ride. We both got off loving it. As soon as we got off I tried to get another virtual queue to ride again (Nate decided he wanted snacks). I was able to get a queue about 45 minutes away! Which seemed like just enough time for Butterbeer. 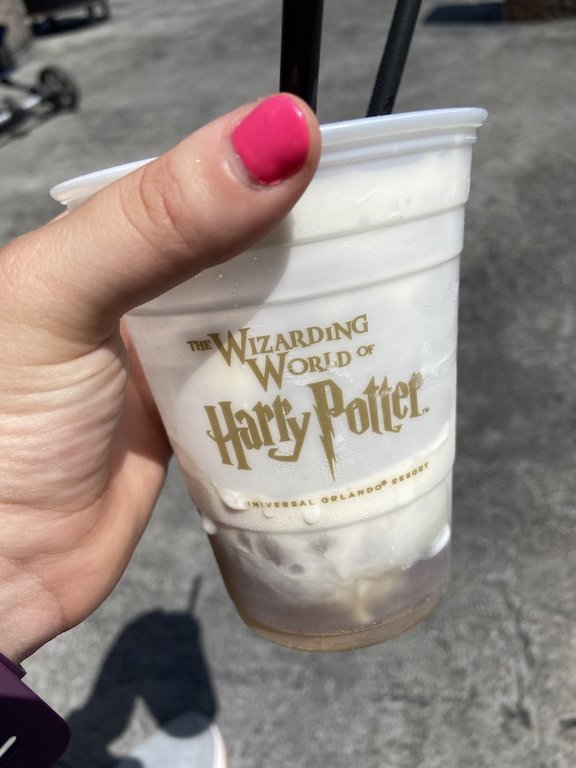 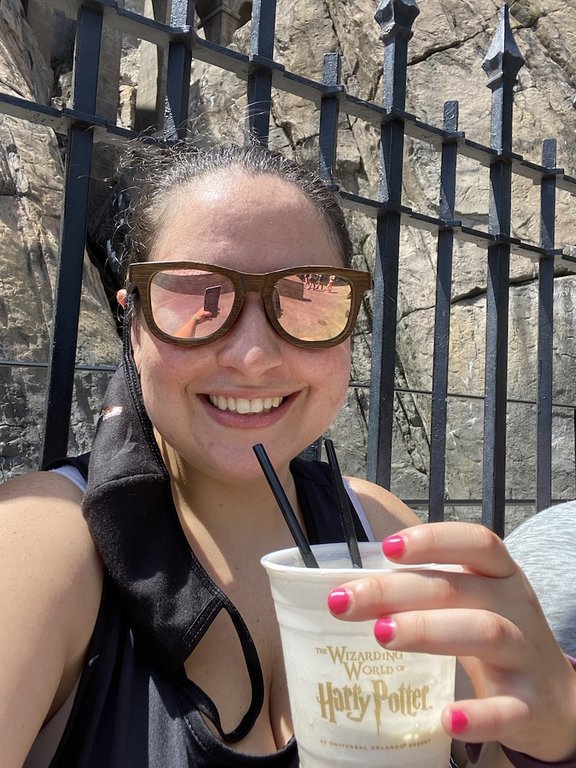 Again we didn't feel safe walking and drinking so we found a quiet spot to sit for a minute and drink our Butterbeer. Before going into the virtual queue again, Nate wanted to find a cooling spot to eat his pretzel. We went to where the stunt show used to be for our cooling area. Since this area is shaded, it had a great breeze and everyone was able to really space out! Nate hung out here as I went to ride Hagrids Again! After a second ride, I still felt the same way, This ride is amazing!