It's been since December of 2018 since we were last at our favorite place on the planet and we're thrilled to be making our return at the end of February. I'm 45 years old, but embrace my inner 11 year old quite freely. Connie is a woman of distinction - we're using her AARP discount - though I bet she will get carded as she doesn't look old enough to be eligible. We met twenty years ago at work and became instant friends. Many many years ago, we actually traveled to Disney separately - but concurrently - and met up on that trip and hung out... and decided we should start going on vacation together. We're excellent travel friends; I like naps and breaks and she doesn't mind that I abandon her for my hotel room mid-day. I also love that she is fiercely independent and does whatever she wants without any hurt feelings on either side of things. We really do tolerate each other quite well - which makes for a very relaxing trip.

We've traveled together a lot and have been to Disney together probably 10 times. We're staying at Pop Century, which is our usual go-to resort. So much has changed since our last trip, including the addition of the Skyliner, Mickey and Minnie's Runaway Railway, Ratatouille, and of course Galaxy's Edge. Connie has been one other time without me and has seen Galaxy's Edge, but is a giant Star Wars fan so we'll plan to spend a good chunk of time there - especially since neither of us has ridden Rise of the Resistance yet.

We fly out early and plan to be at DHS on Day One no later than noon - and hopefully sooner. I'll try to get LL passes for RotR for that afternoon though I don't know if you have to be geographically located on the property to score them? I guess we'll find out. We are there Sunday - Friday, with an early flight on Friday morning. That gives us four a half amazing days to explore stuff we've never done and revisit old favorites. We are renting a car because we are impatient, especially at night.

I've made dining reservations for Space 220 (just the lounge right now; I'm hoping to find a spot in the dining room), Brown Derby, Beaches and Cream, Le Cellier, Rainforest Cafe (AK), the Creperie in France, Be Our Guest, the Plaza, and we have MK Dessert Party tickets for our last night. All of that is subject to change; we value spontaneity but I also love my spreadsheet itineraries and such. Frankly, if it were up to me and there wasn't the need to plan so much, I'd show up and hop on the first bus that showed up at the hotel and let it take me wherever. But, that's just not realistic anymore with the way we like to do Disney.

Anyway, I'm getting really excited. We're less than a month away! I hope you'll enjoy the Trip Report as much as I enjoy writing it.
Click to expand...

Your photos are almost as fabulous as your shirts!! I am glad you made the decision for the ECV. No judgement here and I'm sure it gave you some needed time off of your feet. Bonus is the great CM interactions! Happily following along too!

kirksheppard said:
On a scale of 0 - 10, I went full NERD ALERT yesterday and predicted what I would be getting at all the various meals we have planned, calculated the cost (plus tax and tip, when appropriate) to better hone in on my budget for this trip. My spreadsheet keeps growing . . .
Click to expand...

love me a good spreadsheet - my Disney one grows constantly 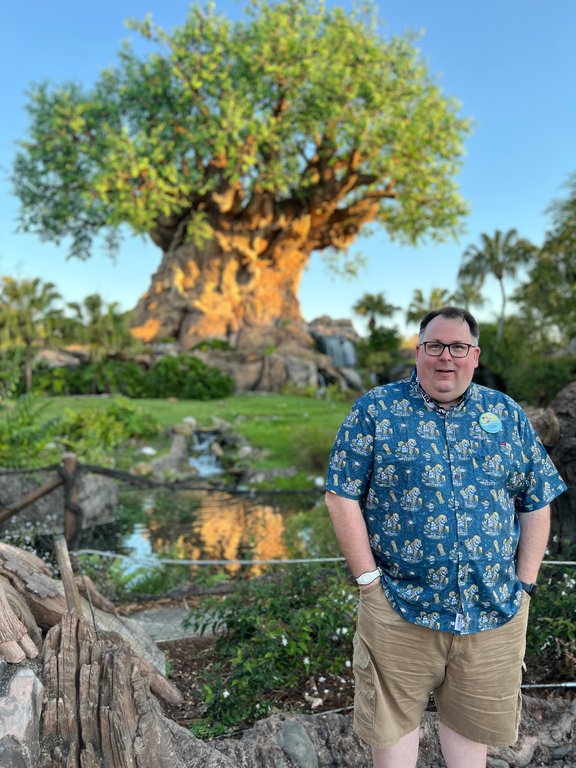 We were up bright and early for early entry at Animal Kingdom. I managed to score Connie a LL for Flight of Passage. I rented another scooter, which was awesome, and we motored back to Pandora to take some pictures and look around. We got in line for Navi River Journey, which had technical issues and didn't open until 8. But I didn't care; there was nothing else to do and I was sitting down in the shade with a gorgeous view. 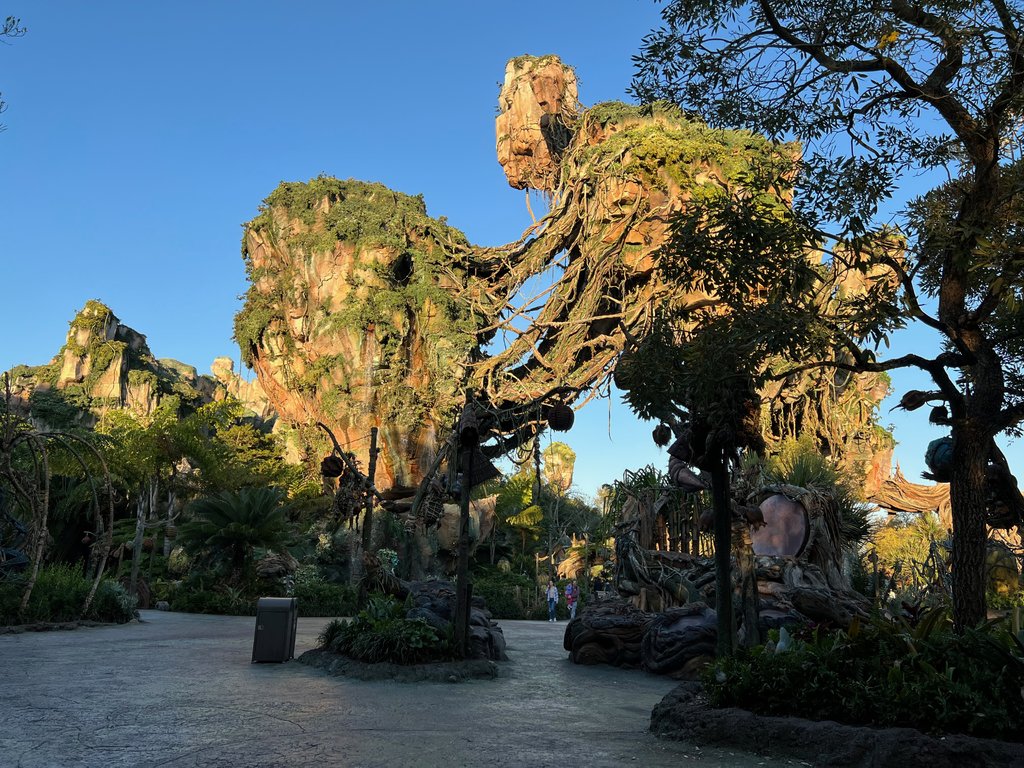 Right at 8am on the dot, the ride opened and we were one of the first few boats through. It's such a pretty ride. 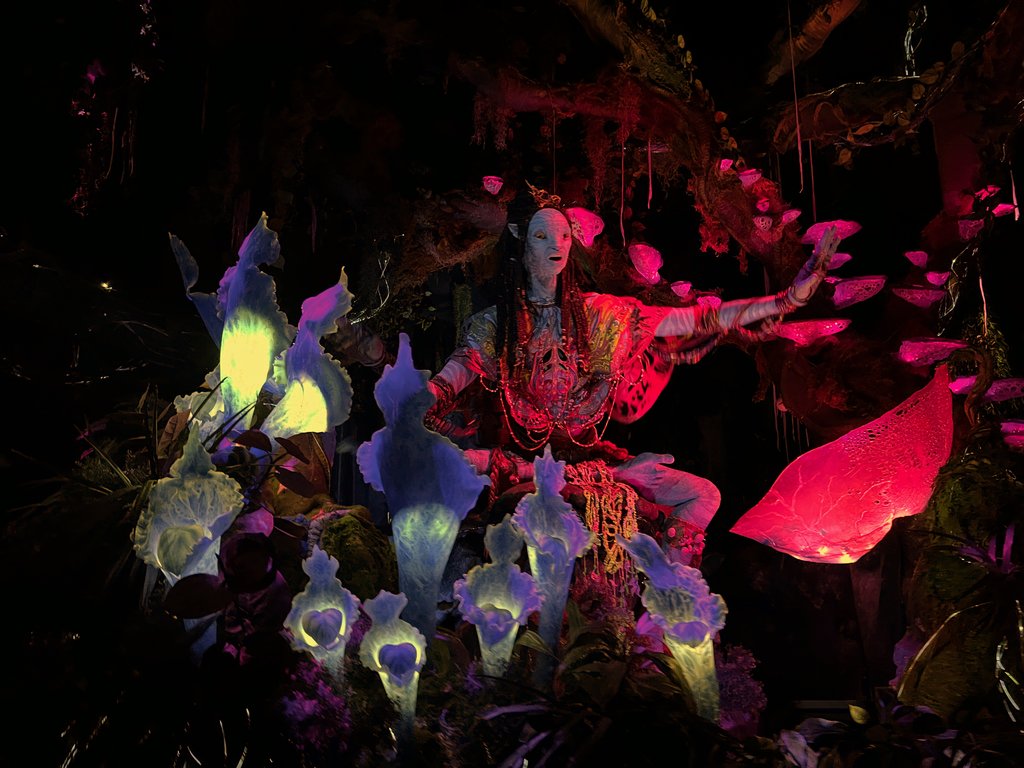 Connie rode Flight of Passage and I found more shade and waited for her to return. Then we headed to Harambe, and got to see Donald and Daisy float by on a party boat! 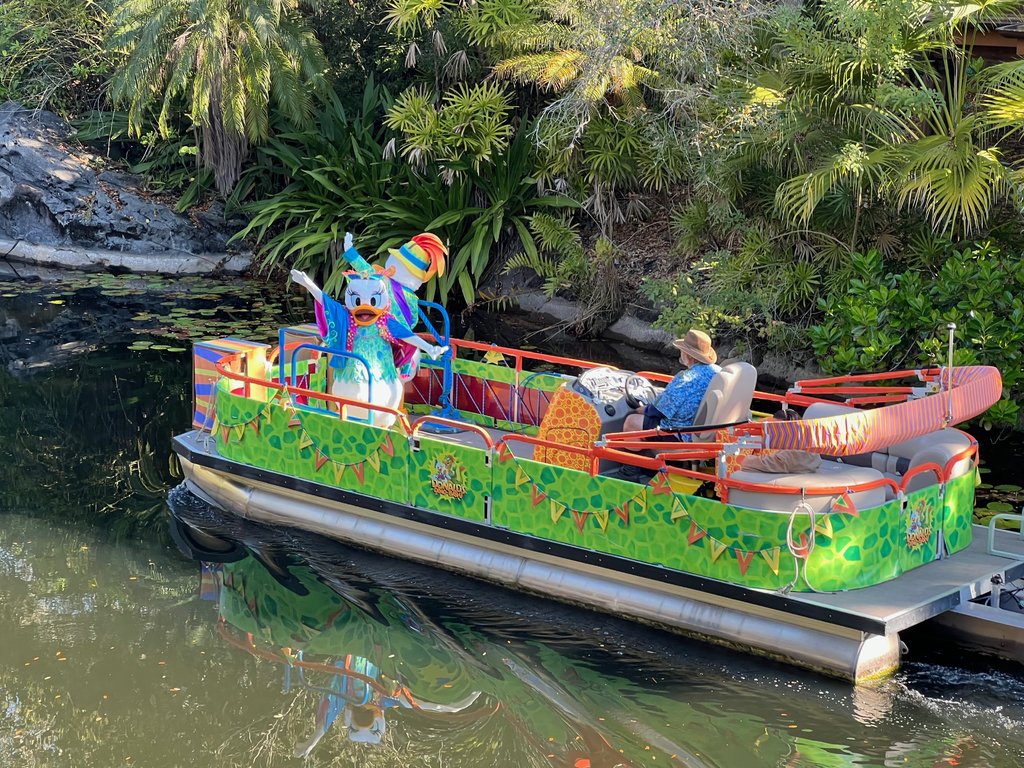 It was Mardi Gras and I was stunned at how many LSU shirts I saw that day; I didn't realize people left Louisanna and came to Disney for the week but it makes sense.

We had a LL for Kilimanjaro Safari and we walked on and loaded up within 5 minutes. A lot of animals were very active, but no lions this time around.

We went through the Panagani Forest and saw a few gorillas and other animals, but it was so crowded. We made our way to the front of the park and checked in for lunch at Rainforest Cafe. 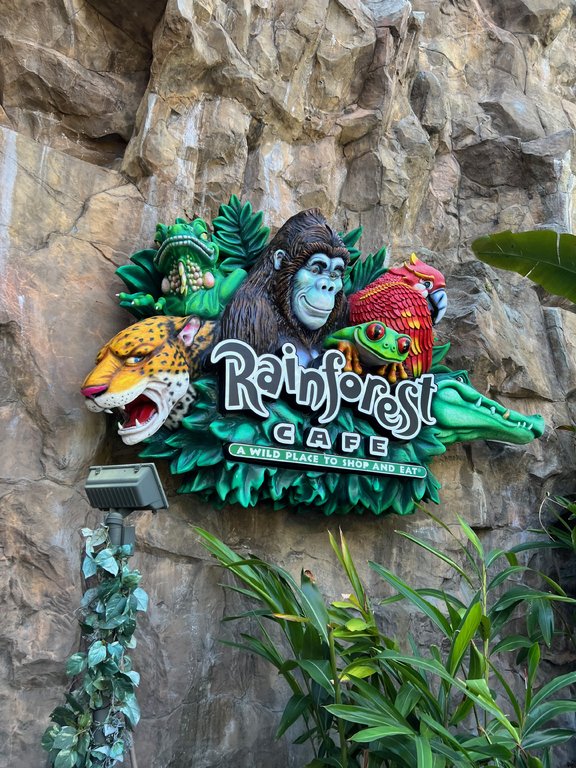 I had a BBQ Burger and I forget what Connie had. We both ordered Raspberry Lemonades; what we didn't know was that they were $10.99 each and came with a collectible shaker . . . that we left on the table. What are we going to do with those? Lunch was fine but this was definitely towards the bottom of the list of favorites on the trip.

We turned my scooter back in and headed for the bus. It was getting hot and the crowds were getting to us. Plus, we had big plans for EPCOT later that night.

Original Poster
Sorry for the delay. Life and stuff!!

After a nice nap, we headed out for what is perhaps the most gorgeous view in all of Disney World - a skyline ride to EPCOT. I love that half from Riveria on, especially at dusk. It was magic. I wish that I could get better photos from inside the gondola, but I'm also appreciative of the shade that the overlay stickers provide. And I really do try to not live my life through my phone camera lens. That said, below will be some photos of the evening!

I put my name on the waitlist for an ECV; I was number 5 so I was hopeful that it might happen. The park was so crowded as the Flower and Garden Festival had begun. 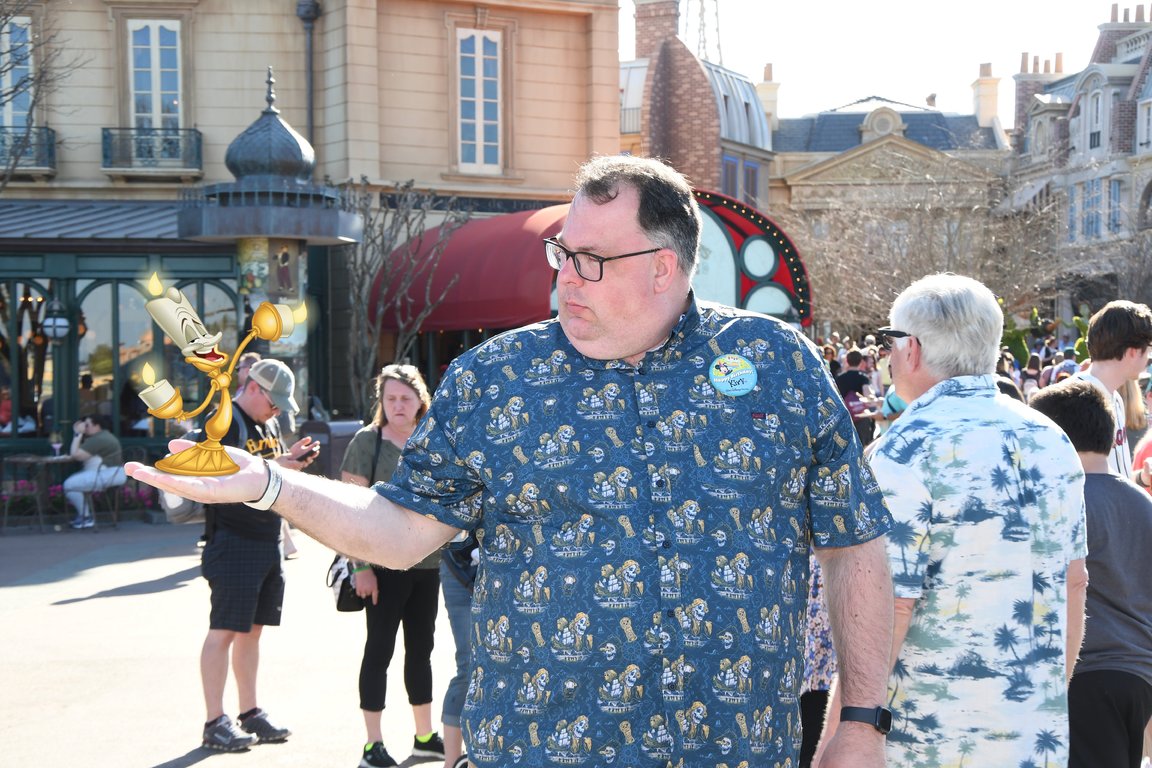 We explored Morocco because I realized that I've never really walked back into the pavilion and looked around. I liked it, but I need to go back and do it sometime when it's not so crowded. We then went to Japan and took some more photos, like this one: 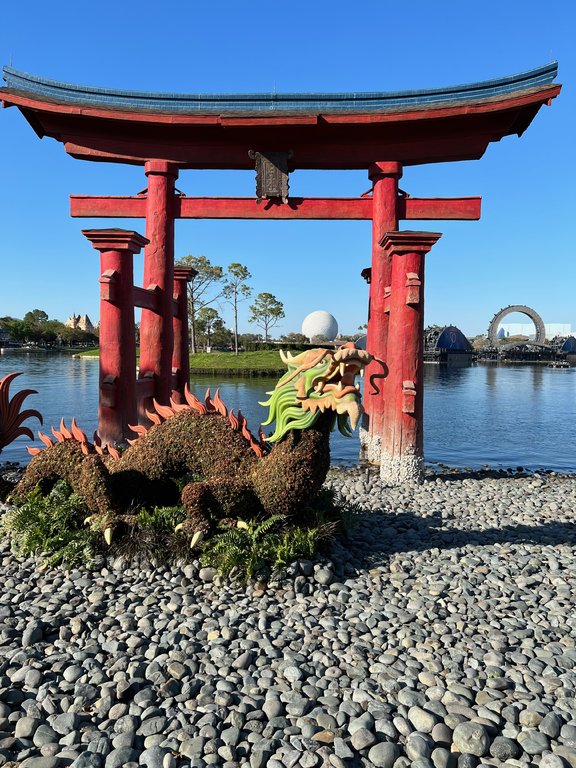 I really dislike that Harmonious stuff messing up the view across the lagoon. I didn't see the show (I struggle with the crowds at the end of the night and there was no obvious way to buy a viewing party ticket that I could find for the show this trip) so I hope that those hideous set pieces are worth it.

We walked to America and I got a Mickey Ice Cream Sandwich and a bottle of water. I wanted to hear Voices of Liberty and they sound so good in the rotunda. We also explored the Native American exhibit inside the building. Connie isn't a fan of The American Adventure, so we parted ways for a while. I enjoy the show, mostly for the technical genius of all of those rotating sets that live under the stage.

Right during the finale, I got a text that an ECV had become available so I hoofed it back to the International Gateway and picked it up. There was a concert going on in the America Gardens Theatre but it wasn't a famous band; I guess some nights they have in-house musicians play? I got my scooter and waited for Connie to disembark from the Friendship boat that she'd taken from the other side of the World Showcase Lagoon.

We sat in the shade in France for a bit and just people watched. We had a reservation at La Creperie de Paris so we made our way back there eventually and were able to be seated pretty quickly. Our server was really friendly and explained the menu. The prix fixe is a really good deal, especially since it includes a drink - and Connie got a hard cider that she really loved. I stuck with Coke, because I don't drink alcohol. Connie got the salad, which was huge and nice and I got the Potato Leek soup, which I enjoyed very much. I did clarify that it was served hot as sometimes these soups can be served cold (I guess? I read that somewhere I think?). After much debate, I ordered the chicken crepe with bechamel cheese minus the mushrooms. Connie got the ham and egg and cheese, and added mushrooms to hers. She asked for the egg to be scrambled, but it came out looking a lot more sunny side up. Still she said it was delicious. 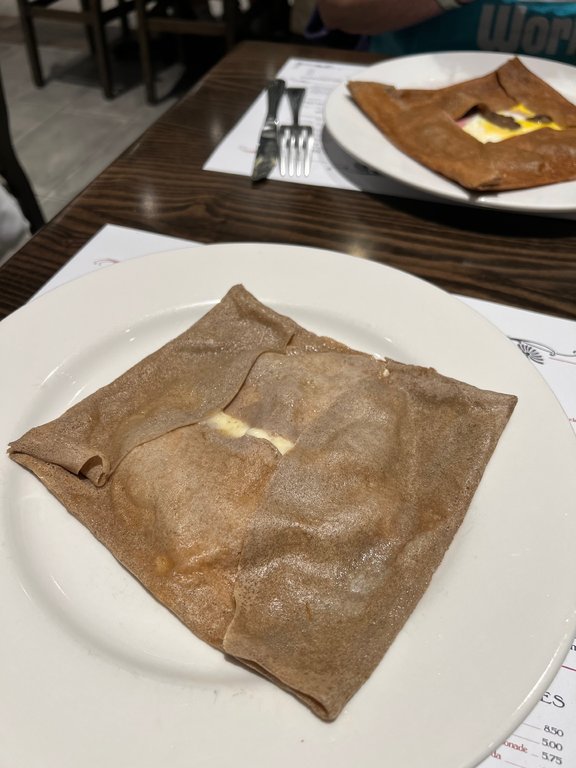 For dessert, Connie went with the mixed berry and I got the pear and chocolate ganache and I added a side of ice cream to mine. 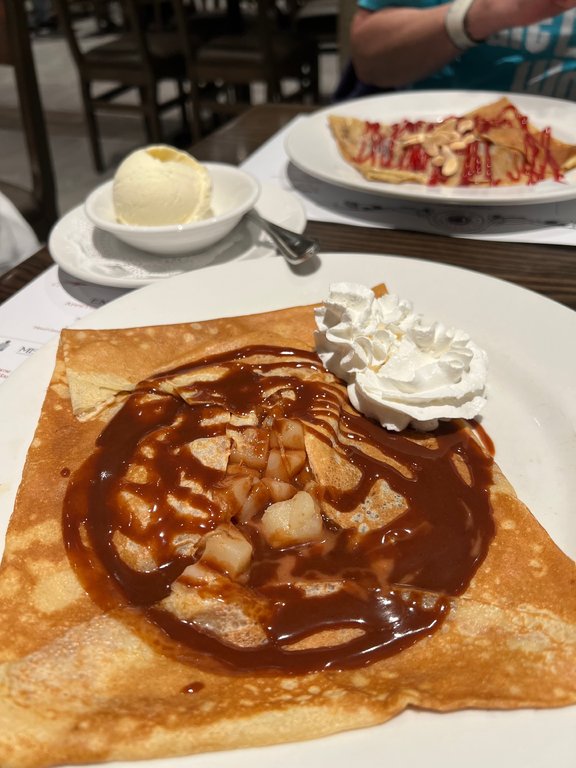 I'd eat here again, for sure, but it did take a very long time for our food to arrive. In fact, I was shocked at how slow they were to turn the tables at almost all of our sit down meals. Definitely a change from the past!

After dinner, we headed up to the front of the park so we could see Spaceship Earth all lit up. Here's a shot that shows just how crowded things were: 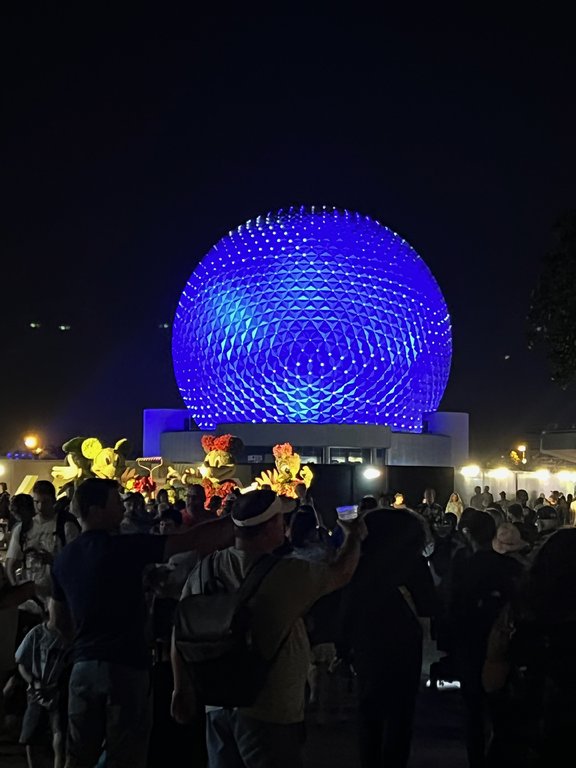 We could have watched the light show on the geosphere for a much longer time than we had but we really wanted to beat the end of the night crowds out of the park. Still, we got lots of photos and were satisfied with a really nice evening in the park. 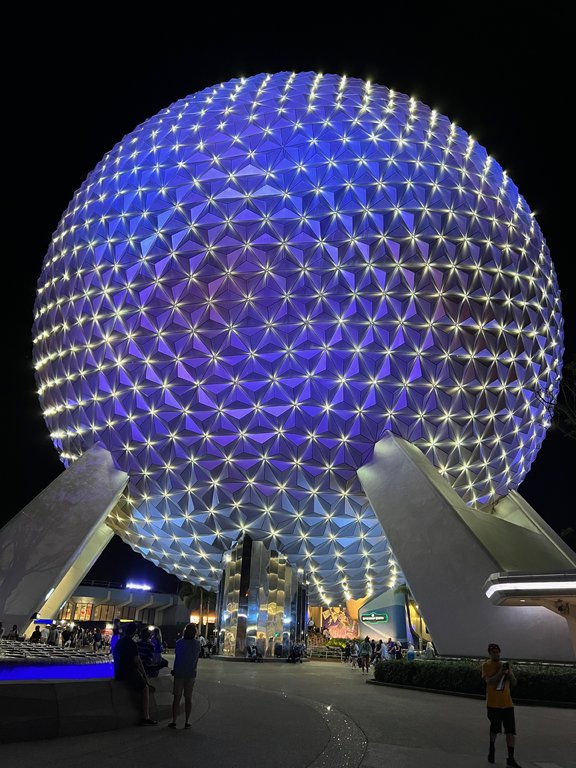 The Skyliner ride back to Pop Century was lovely; we shared our cabin with a new college program cast member who was friendly and chatty. That is one thing that I noticed this trip; despite how crowded it was, most people were super nice and friendly and we were all sorta happy to be there, I guess.

Premium Member
I’m going to guess the group you heard performing was Skillzmatic, based on the Garden Rocks Concert lineup. 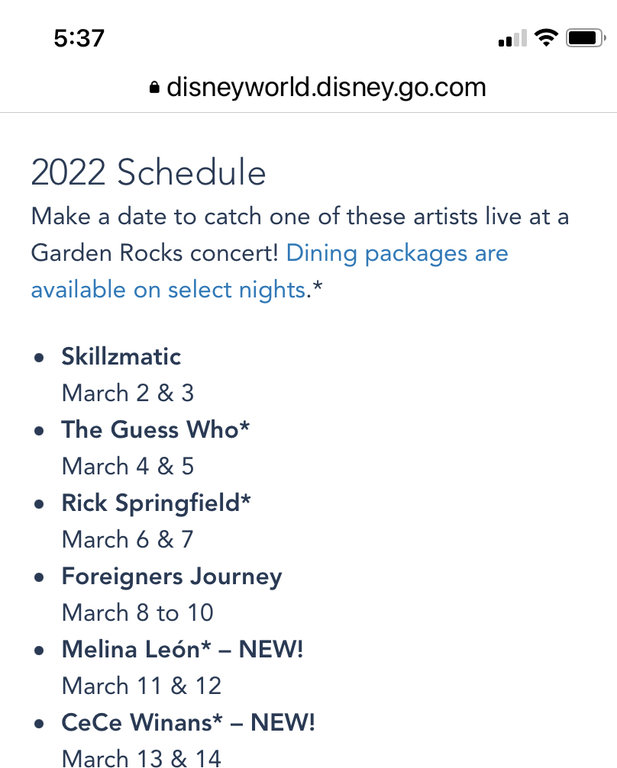 Also I was glad to know you enjoyed your savory crêpes, because they look very unappetizing in your picture. Really poor presentation. There should have been a garnish or something on those plates!
M

Tuvalu said:
I’m going to guess the group you heard performing was Skillzmatic, based on the Garden Rocks Concert lineup.

Also I was glad to know you enjoyed your savory crêpes, because they look very unappetizing in your picture. Really poor presentation. There should have been a garnish or something on those plates!
Click to expand...