Original Poster
Not sure how successful Onward will do and when or if we’ll be getting a meet and greet with the main characters but saw this picture and thought I’d share.

Advertisement
Disney announced a meet is coming to DCA

Rteetz said:
Disney announced a meet is coming to DCA
Click to expand...

Oh thank you, I must’ve missed it

Make sense to kick out Sulley since they just Booted out Mike and place them at OMD since the preview just began showing....

I wonder if there’s any way to move Sully near Laugh Floor for that to happen.

Put them back across from Sci-Fi Dine in....The Garage is still there....adjacent to Red Carpet Dreams.. 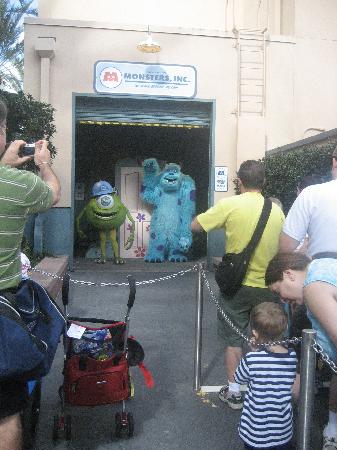 Movie release is strange. No summer release, kind of a strange storyline from what I can tell. I'm curious to see how well this does or if this film does poorly (hope not)

Piebald said:
Movie release is strange. No summer release, kind of a strange storyline from what I can tell. I'm curious to see how well this does or if this film does poorly (hope not)
Click to expand...

From the trailer I saw, I think it's going to be a hit.

Eh. In all honesty Onward just looks bland to me, and it lacks the PIXAR vibe I usually get.

I don’t think they want to make Studios any more popular than it already is. The other location they could place them is MK (between Tomorrowland and Fantasyland), but there’s really not a lot of space for them. Moana and Miguel are other question mark, “why are they not here” characters.

It could have to do with height requirements. They seem relatively tall. The characters I could see switching our are Ralph and Vanellopie, but they wouldn’t take away a heavily detailed meet-and-greet away from Epcot right now - it needs all the help it can get, Studios and MK do not need a draw right now.

If you add something somewhere, you have to take away something else. Bye-Bye roaming Kevin, bye-bye MK Buzz, Dapper Dan and Trolley hours get slashed even further... Mike, Frozone, and Bo Peep get removed...
Last edited: Feb 21, 2020

It’s not expected to do all that well. Likely a miss for Pixar but we will see.

MansionButler84 said:
It’s not expected to do all that well. Likely a miss for Pixar but we will see.
Click to expand...

I see this under the Lesser known Pixar catagory...Got a feeling this will happen to Soul as well...

I feel like Onward and Soul are in very similar veins of Coco and Inside Out... which have had surprising shelf life in the parks, at least in terms of consistent new additions, with the latest being a renewed M&G and a brand new parade float.

I feel that Disney really discounts storytelling that does not follow the typical story arcs of a princess-style film. If Monster’s Inc, a workplace comedy about the value of loyalty and laughter, was made today, I doubt Disney’s infrastructure would have supported the amount of characters, Merch, video games, tv specials, etc.if it had premiered today.

It may not have known the lasting value of two buddy monsters, but Disney must know the emotional value of story centered around a dead father.

Good Dinosaur faded into obscurity because of it’s insistence on being derivative, weirdly of other boy-dog stories and other animated dinosaur movies. That is the death of a Pixar movie.
Last edited: Feb 22, 2020

MansionButler84 said:
It’s not expected to do all that well. Likely a miss for Pixar but we will see.
Click to expand...

That has little to do with box office performance.

I don't think DL fans are upset they don't see Russel & Dug over at the parks..I say let em be exclusive.

Cmdr_Crimson said:
Put them back across from Sci-Fi Dine in....The Garage is still there....adjacent to Red Carpet Dreams..

Nothing I've seen in the trailers for this flick appeals to me in the least. Of course, it's always a risk to underestimate Pixar. But this looks like a lesser Dreamworks film, honestly. As for "Soul"...it seems very high-concept, which has its risks (if it's too out-there, audience might have trouble identifying with it), but then I loved, and I mean LOVED, "Inside Out". It spoke to me. It was fresh and genuine, and had a level of world-building that matches the high bar set by "Monsters, Inc.". "Soul" seems similar in flavor to "Inside Out", so I hope it will speak to me too. I will definitely be going to see it. Hope it's great.
Last edited: Feb 23, 2020
You must log in or register to reply here.
Share:
Facebook Twitter Reddit Pinterest Tumblr WhatsApp Email Link
Top Bottom