As for the other 2, Jaq and Gus' will be reminiscent of Chez Remy in France and have large items that are usually small by human's standards. Meanwhile The Pumpkin Patch would be a walkup. The latter one looks like a large pumpkin and serves just that from it's booth. Pumpkin related treats and drinks, like pumpkin juice, pumpkin cupcakes and pumpkin dole whips.
Last edited: Nov 25, 2022

Ooooooo, I had the pumpkin Dole Whip one time when I went to Aulani. It's delicious and was one of the highlights of our trip. I'm surprised they haven't introduced them into the parks.
Last edited: Nov 27, 2022

cdunlap said:
Talk about something I like! I’m 15 years old as of now and I LOVE IT!!
Click to expand...

It would be pretty cool to go inside the walls and see how the mice live. The ones from the film of course... not the dirty, gross ones that make me squirm. I'm like Indiana Jones', I hate every kind of rodent. ... except for the cartoon versions.

dude this is pretty sick

WazHatter08 said:
dude this is pretty sick
Click to expand...

Thanks Bud, it's good to see you again. I've actually really missed seeing you around.

I like Pumpkin, but only during the Fall/Autumn season. Every other time of the year it's dead to me. Like a deadbeat Uncle who never paid you back or the crazy Aunt who picks a fight with everyone during the holidays. 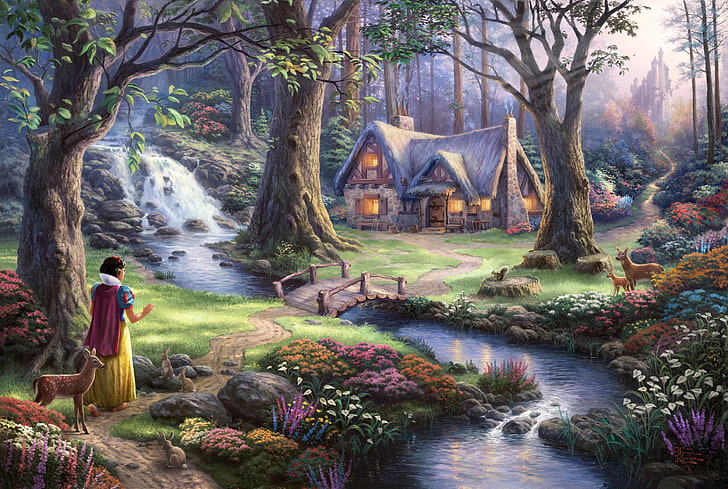 The next section will be home to Snow White, the main princess. Whose castle is the landmark weenie for Enchanted Kingdom park. Her area is located in the middle section of Princess Land and is the 2nd part of this park’s Fantasyland equilvalent. It is themed after medieval Germany, with it’s colorful buildings and many ornate fountains and waterways. The town is boarded along the edges by forests, where Snow White’s furry friends and the Dwarfs reside.

Black Forest Falls
----- (boat ride, similar to na’vi river journey)
----- (At first it is a relaxing ride through the forest starring Snow White and her forest friends. You even hear Snow White singing by her wishing well “I’m Wishing”. Even the animals begin to show to listen to her. Deers, bunnies, chipmunks, birds and many more. But the boat because far from tranquil as it ventures too far off course and wander into the less friendly area. Here you see the evil, more darker side of the forest where Owl’s hoot and even the trees are scarier.)

Snow White’s Magical Journey
----- (dark ride, similar to dl’s original version)
----- (This one shows the story of snow white, much like it’s predecessor. But with more of an emphasis on the huntsman, her love story with the prince and encounters with the evil witch. Since the Dwarfs have their own attraction they will only make a slight appearance at the end.)

Seven Dwarfs Mine Train
----- (rollercoaster, similar to mk version)
----- (This version would have real animatronics and be longer than the Magic Kingdom version. And is more similar to the original attraction (Snow White’s Scary Adventure) than the MK version. The beginning shows Snow White kissing the Dwarfs right before they head to work. Some coaster action happens in the forest and then we see the Dwarfs at work singing Heigh Ho) 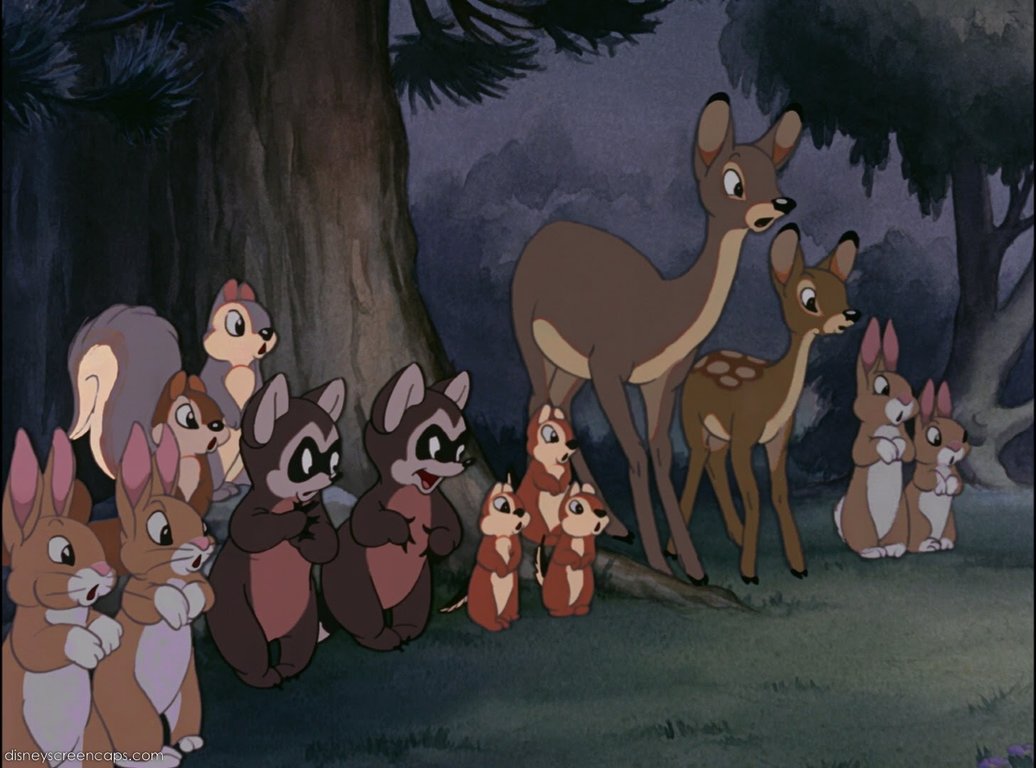 Woodland Creatures Carousel
----- (carousel, similar to prince charmings)
----- (A beautiful carousel with Snow White’s furry and feathered friends. Unlike the usual carousel this one would be made up of nonhorses like deers and turtles. Much like other princesses, animals seem to love Snow White. So this is a dedication to all of those animals.)

a Meet and Greet
--- (with Snow White, Prince Florian and the Mirror on the Wall)

MickeyMouse10 said:
Thanks Bud, it's good to see you again. I've actually really missed seeing you around.
Click to expand...

Thanks man, I’ve missed bein around, excited to finally get back at it, been a rough couple of months

I'm not really into meet and greets, but the magic mirror could be pretty cool. You could make it similar to what they've been doing with the Turtle Talk with Crush attraction. And like what even universal has been implementing in Islands of Adventure (fountain) and Volcano Bay (inside the volcano). 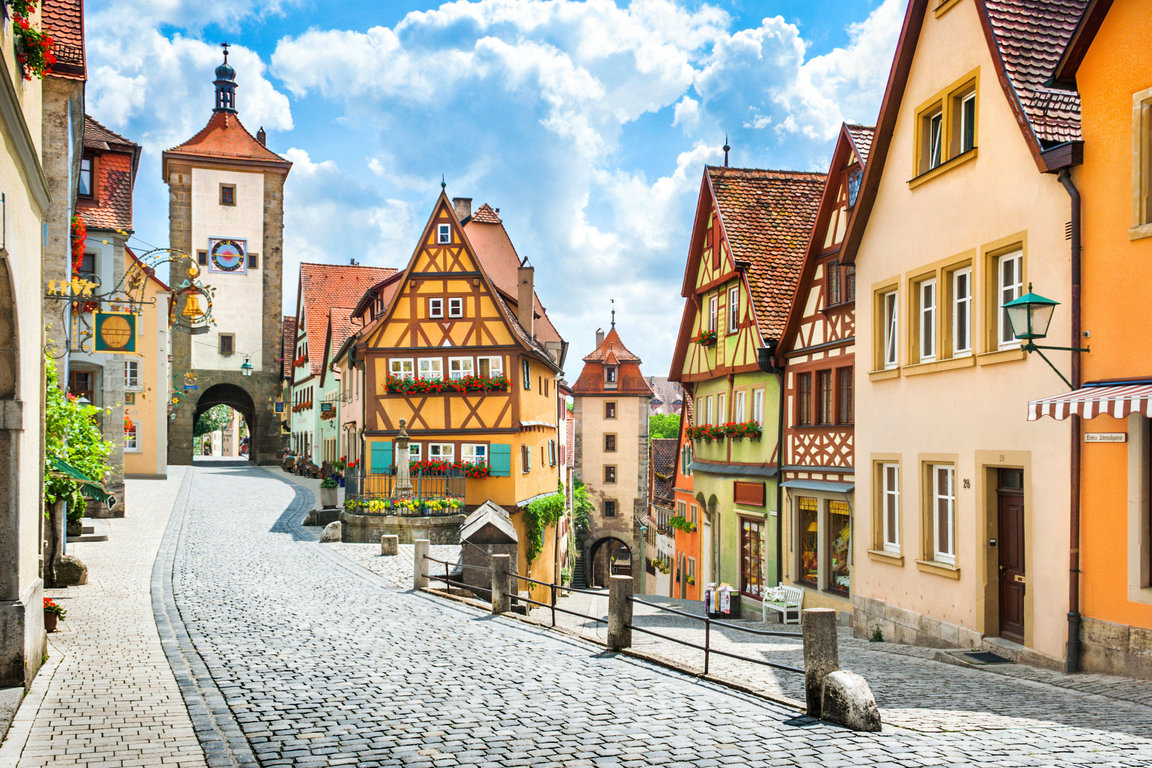 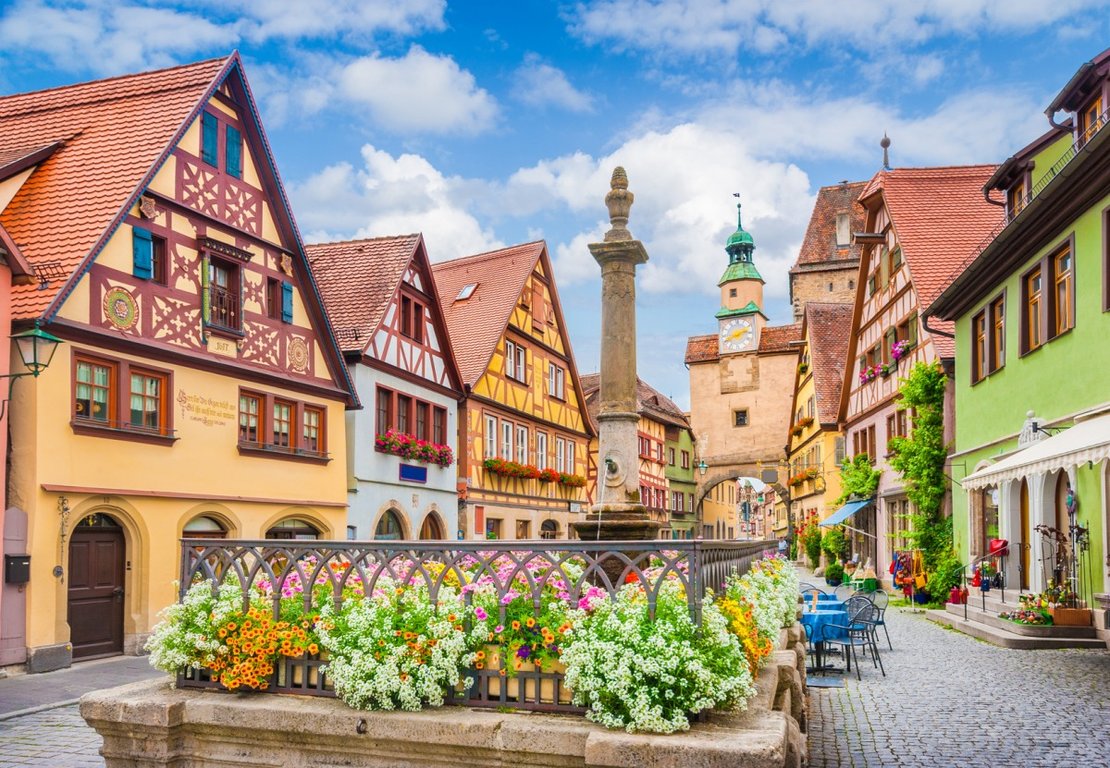 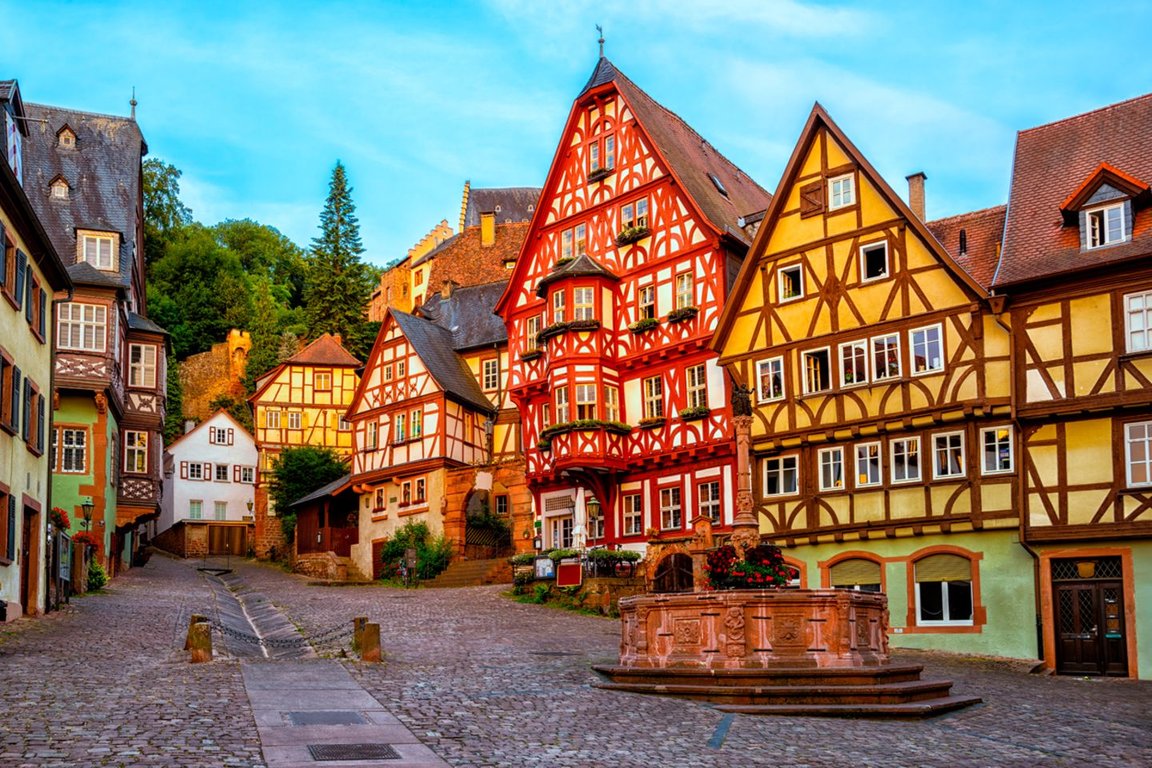 I've been to a few of these places.

MagicKingdom4Ever said:
I've been to a few of these places.
Click to expand...

Whoa, you lucky dog. I'd love to see it in person, it's so beautiful.

Plus the food ooooo, that must be amazing. Do you remember anything cool about the area, which you don't mind sharing?

MickeyMouse10 said:
Whoa, you lucky dog. I'd love to see it in person, it's so beautiful.

Plus the food ooooo, that must be amazing. Do you remember anything cool about the area, which you don't mind sharing?
Click to expand...

Well, for food, there were handmade pretzels and freshly-baked schnitzels, as well as spaghetti eis, which is vanilla ice cream that's designed to look like spaghetti. There were big, colorful houses and winding streets. In the town we stayed in, Rothenberg ob Tauber, there was a big city wall that surrounded the area, and we got to walk on it. This village also inspired the village seen in Pinocchio, even though this is Germany and Pinocchio's set in Italy.

This is the section I’ve been waiting for. I love how you really embraced everything about not only the princesses, but the movies they are in. I raise my Sprite Zero Can up to you.

I wish that I could actually go to this place. I’d definitely have to actually think about moving to Texas and getting an annual.

I’d love to do a real version of mine train without those stupid glowing faces.

Original Poster
Snow White’s Enchanted Table would look like the Dwarf's home. Snow has fixed her visitors a meal fit for 7 Dwarfs. There would be trinkets throughout from each of the dwarfs and funny pictures as well. That show who resides in this residence.

The Apple Orchard Inn is a walkup that serves different apple related treats like Apple Crumble, Apple Cake, Apple Ice Cream, Apple Cider Donuts and Apple Cider. As for the other establishments "Diamond in the Rough" (is a quick service in a diamond mine), "The Huntsman’s Lodge" (is similar to Gastons) and Fantasy Faire (is another walkup, which serves Dwarf inspired treats).

MickeyMouse10 said:
Snow White’s Enchanted Table would look like the Dwarf's home. Snow has fixed her visitors a meal fit for 7 Dwarfs. There would be trinkets throughout from each of the dwarfs and funny pictures as well. That show who resides in this residence.
Click to expand...

That actually sounds pretty cool bone daddy. As long as it's not dwarf sized food I'd be totally up for it. I'm a pretty big eater, that usually goes with quantity over what is perceived as quality.

It's a good thing I like Apple or else I'd be screwed. LOL

This area will be home to all of the Disney characters who dwell in the forest. It would have a natural forested appearance with lots of trees throughout. Each of the homes and attraction exteriors would look like trees as well, except for Elliot’s from “Pete’s Dragon”, who lives in a cave.

The homes are similar in appearance to the ones the characters from “Winnie the Pooh” reside in. So each is very different from one another to show the different themings of the particular story. Some are in the trees and some are even the trees themselves.

Bambi
----- (dark ride, similar to winnie the pooh)
----- (The young deer gets his own attraction, along with Flower and Thumper and all of their forest friends. Even though it is a powerful and important scene the death of Bambi’s mother would be omitted and it will focus more on his happier times in the forest.)

The Fox and the Hound
----- (boat ride, similar to living with the land)
----- (A young fox named Tod is taken in by an old woman after his mother is killed by a hunter. Full of mischief, Young Tod befriends Copper, a hound dog pup. Both of them become good friends despite where their paths lead. Not knowing they maybe enemies in the future.)

Pete’s Dragon
----- (aerial carousel, similar to dumbo)
----- (The adventures of an orphaned boy named Pete and his best friend Elliott, who happens to be a dragon. The young boy, Pete, is found in a forest where he's been living for six year after an accident took his parents' lives.)

The Sword in the Stone
----- (dark ride, similar to snow white’s scary adventure)
----- (Sword has many scenes where the main characters shapeshift into different animals. Especially during the grand battle with Merlin and Madam Mim. These scenes help to make the film fit within the animal based land. The main character Arthur also spends much of the film as different animals as well. As Merlin tries to teach him how to react to different environments in the forest.)

Robin Hood
----- (dark ride, similar to winnie the pooh)
----- (This was one of my favorite movies growing up. It’s got some great country music in it… even though it takes place in England. Our heroes make their home in Sherwood Forest, where the evil Prince John cannot get them.)

The Hundred Acre Woods Amphitheater
----- (stageshow, similar to country bear jamboree)
----- (Our favorite chubby bear and all of Christopher Robbins’ other toys sing about various things. For Tigger it’s obviously got to be bouncing, Eeyore’s is about rain and sunshine and Pooh sings about his favorite food…. honey of course.)