Trip Report **COMPLETED** The 4 M's (Plus two J's and a N): A Birthday Christmas Extravaganza

Original Poster
Hello everyone - we got back from the World yesterday so time to start our trip report.

Who ?
The whole family (as the title indicates)
My sister Jill and my brother in law Nick

And my parents (Jeff and Mary) and myself (Megan)

Why?
To celebrate Jill's 40th Birthday and Christmas

The title:
I like the title the 4 M's because that's what Max calls my Mom, Betta, him and I - Mary, Mom (Betta), Max and Megan Then - just added some initials

Day 1 December 3, 2019
After work I headed home and met up with my Mom, Dad, Max and Betta and we headed to the airport. We were originally supposed to leave the next day, but that flight got pushed to 5 am and I work typically until 9 pm on Tuesday nights. So, I adjusted my schedule and we took this flight instead of having to get up SUPER early after a late work night.
I should mention that Betta was on crutches this trip - this is from her surgery I have mentioned before (hip surgery) that she had 8 weeks ago. Needed some help getting around long distances.
I had a hard time taking photos this trip just due to pushing the stroller mostly so sorry in advance.
We had some dinner in the airport then headed to our gate.

Our room was ready and it turns out we were next to Jill and Nick and Betta and Max were next to us. We did not ask for this so that was a nice surprise.

Our plane was at the gate but for some reason no one got off for forever. Then, we had 10 wheelchairs that needed to go on one at a time.

Finally we boarded about 20 minutes late.

We ended up having to de-ice. It was SUPER dry out at the time we were supposed to leave but all of a sudden started snowing SO hard right before we left.
You can kind of see it outside the window

So...in the end we ended up leaving about 45 minutes late
The flight felt like it took forever but eventually we landed at 9:30 pm.
New Star Wars Galaxy's Edge stuff around the fonorail

Next up: more arrival

To which everyone in the car laughed.

We elected to get our luggage to avoid a late drop off.

Hello Disney and all the dead bugs on the window

I did not take any more photos the rest of the night. We made it to the hotel around 11:15 pm and headed right to bed.

Yeah, I'm in. Looking forward to seeing your fun adventures. And looks like I'm first in!

Following along, interested to see if we ended up in any of the same places! Always enjoy your reports.

2nnnddd!!! Can't wait to hear all about your adventures!
I

Premium Member
Can’t wait to read all about it!

ajrwdwgirl said:
Yeah, I'm in. Looking forward to seeing your fun adventures. And looks like I'm first in!
Click to expand...


Loco_driver said:
Following along, interested to see if we ended up in any of the same places! Always enjoy your reports.
Click to expand...

MickeyCB said:
2nnnddd!!! Can't wait to hear all about your adventures!
Click to expand...


Swissmiss said:
Can’t wait to read all about it!
Click to expand...

TheMouseFan said:
I'm in! Can't wait to hear about it!
Click to expand...

. While getting ready Betta texted me to say she was heading down to the lobby to grab the stroller and see if we could stay in our current rooms. Since we headed down the night before fairly last minute we had two separate hotel reservations. We were originally staying a night at All Stars but with persistence I found 2 rooms at French Quarter so we did not have to move resorts. While my sister was in the line to ask about moving rooms we both got room ready texts for our current rooms. Woohoo!
My Mom and I still headed down to the lobby to change credit cards.

There was a long line at check in, but it moved fairly quickly. The woman in front of us asked for a manager because she was in line for "45 minutes" which I know for sure she was not because I asked my sister who was in the line 30 minutes before us

Eventually we got on a MK bus and we arrived

We stopped for a PP picture to start. It was a bit chilly out - I think at this point it was only like 50 degrees outside but some of us were in shorts because it was still warmer than home

Then (after buying Max a blanket for his stroller) we headed to Haunted Mansion for our first FP.

Next up: more MK

Can’t wait to follow along! POFQ is my favorite moderate as well, and the Christmas decorations there are so cute!

I posed with the crutches

Then we headed to the Peoplemover

Next up: more MK

k8einwdw said:
Can’t wait to follow along! POFQ is my favorite moderate as well, and the Christmas decorations there are so cute!
Click to expand...

I wish I took more photos of the Christmas decorations 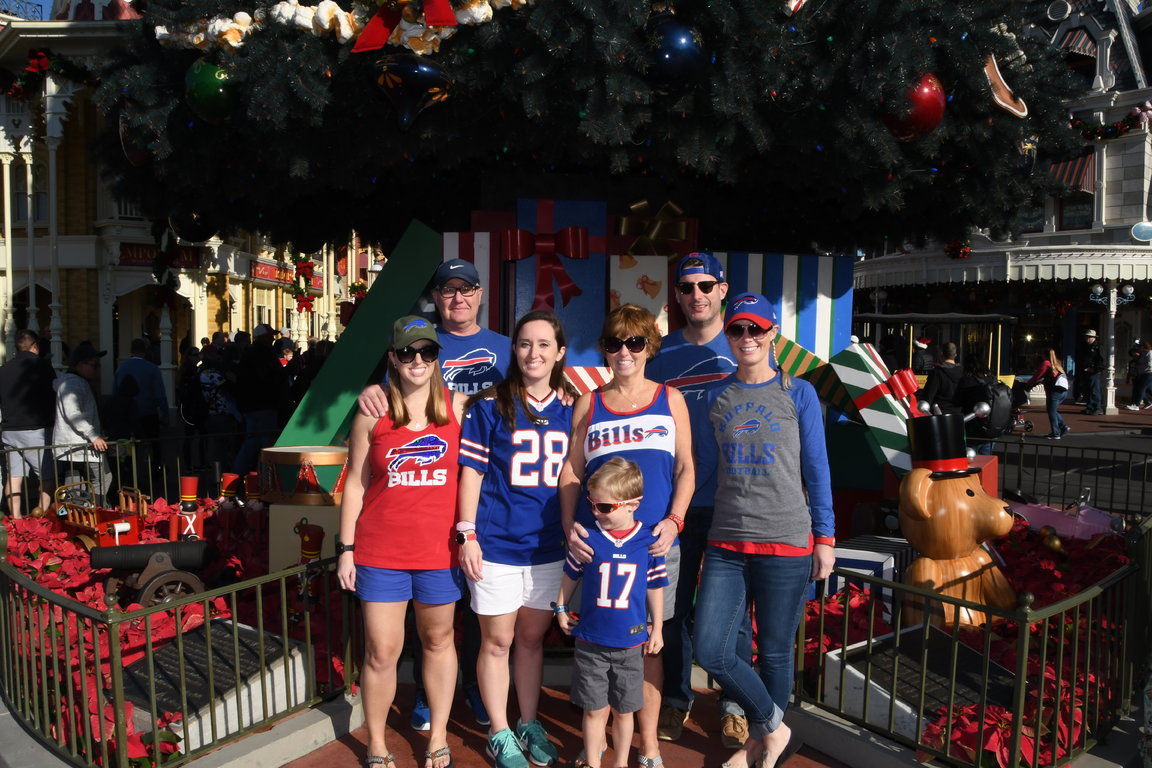