Trip Report **COMPLETED** - Should we go, or should we postpone? We made it to WDW!

It has been awhile since I have posted a thread. In fact, the last one I posted was one year ago and it was a pre-trip report for our first Disney cruise that would later be cancelled. We began planning for this trip, not knowing what the future would hold. I have to say, that the months leading up to this trip, I began wondering if it was meant to be. A few months ago, my husband and I both came down with the dreaded virus. It took us a full two weeks to really get over it. I was worried about our son, but he never showed any signs, but of course had to quarantine with us. Then a couple weeks later, they had a break out of the stomach virus at his school. He recovered, then after 3 days back in school, he caught it again! I went back and forth with cancelling because I didn't want him to miss anymore school, but he worked really hard to catch up and his teachers have been very supportive. With that being said, we were all healthy again, so off to WDW we went!! I'm happy to share our trip with you all and hope that you all enjoy. We had a fantastic time! 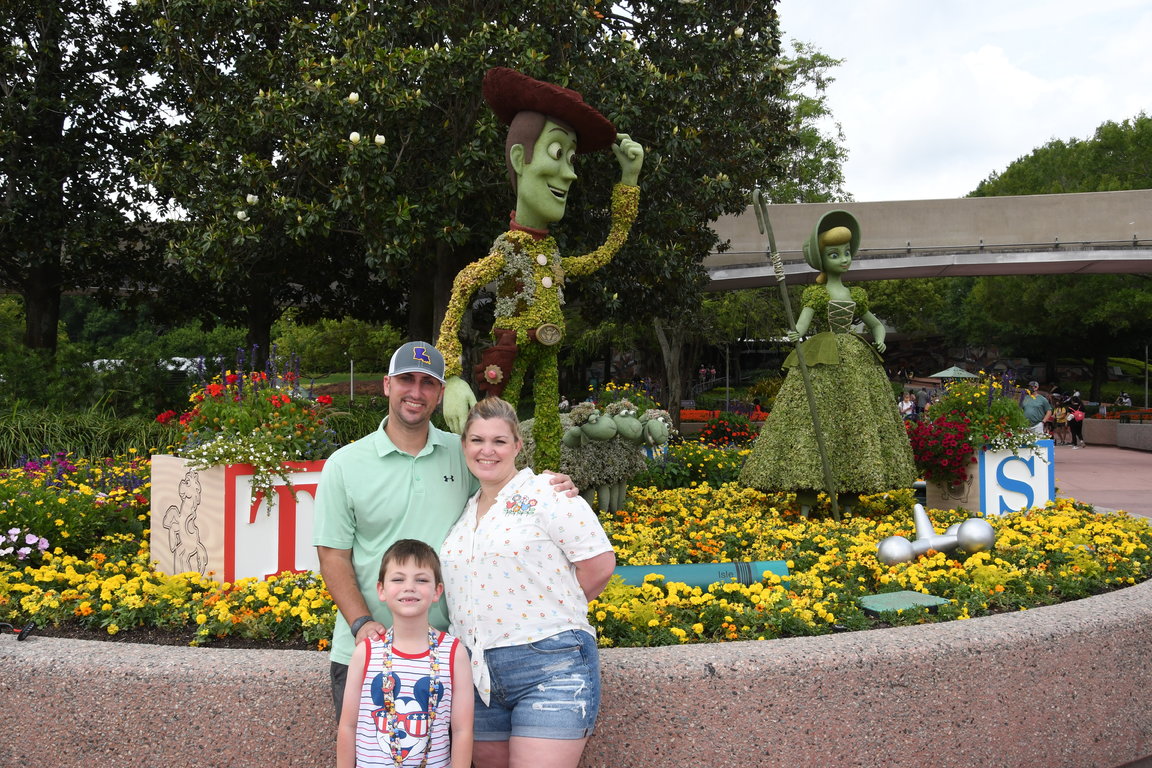 I am so glad you could make the trip!! Following!

Premium Member
In and on the medal stand!

Just finished your report and saw we just missed each other!

Count me in too. Can't wait!

Our flight wasn't until the afternoon, so I spent the morning finishing up some housework. I must come home to a clean house after vacation! We left the house around 12:30 to head to the New Orleans airport. We made a quick stop at the pharmacy to pick up some meds. Cam and I waited with excitement to hit the road while Josh went in. Soon enough, we were on our way. We live about 45 minutes away from the airport. 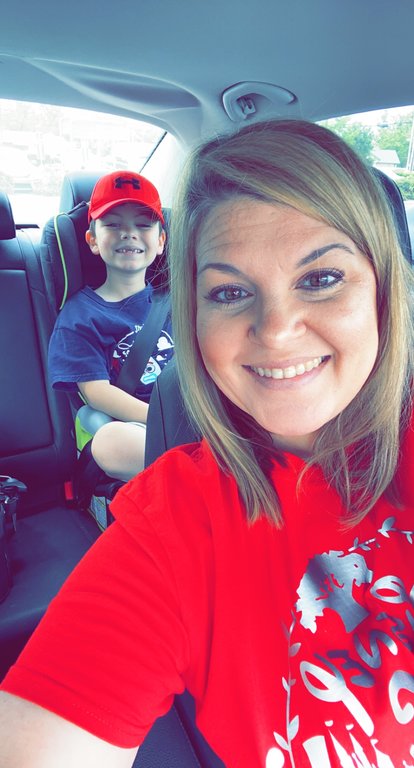 We parked at a nearby USPark and took their shuttle over to the airport. We had no issues checking our bags and we were through security in no time, thanks to TSA pre check. The airport didn't seem very busy. New Orleans just got a whole near airport. It's very nice and so much bigger than the old one. There are way more food options. We opted for Chick-fil-a for lunch. We got comfortable at our gate and waited for our boarding time. I loved watching the little kids arriving to the gate so excited to be going to Disney World.

Anytime we fly with Cam, I always get the early bird check in with Southwest. I like to make sure we are on the plane early and all get to sit together. Cam played his Nintendo Switch on the flight. I started watching Soul. I got about 30 minutes in, but I couldn't get into it. So I just listened to music the rest of the way. Should I go back to it and finish the movie?? 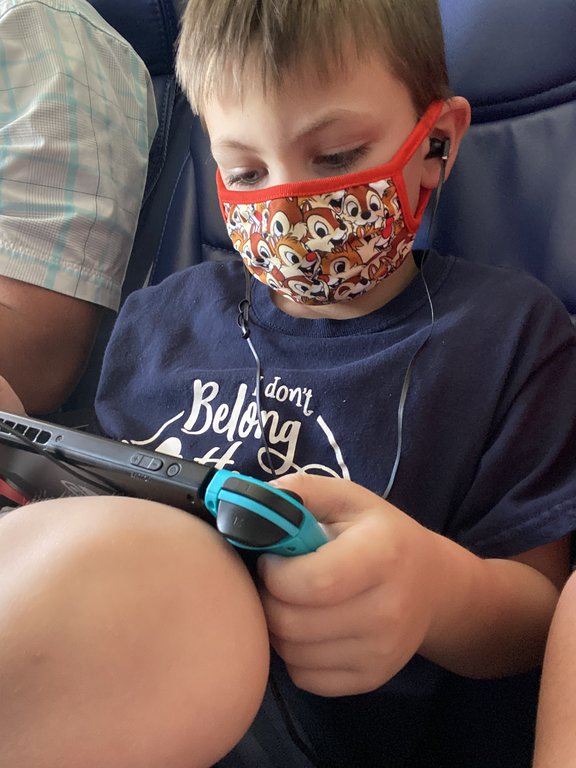 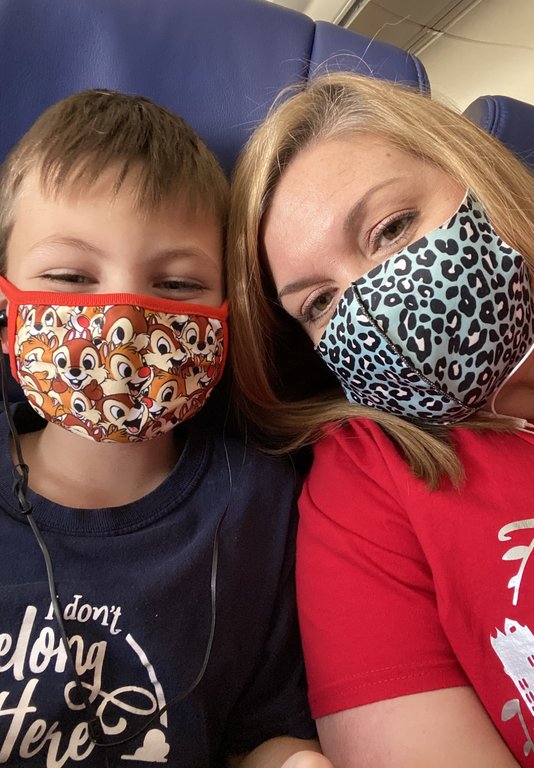 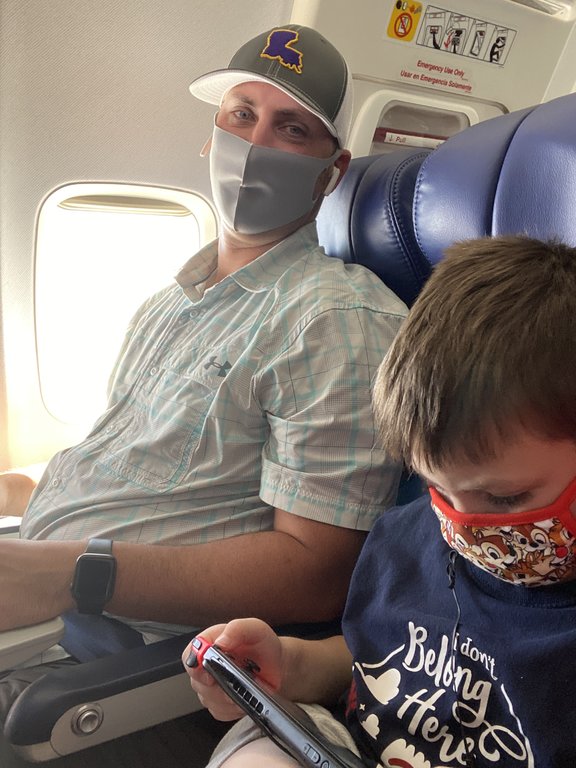 The flight is about an hour and a half. It seemed like we hovered over the airport the last 10 minutes though. I was watching the flight tracker and we kept going in circles.

Now the New Orleans airport may not have been busy, but the Orlando airport was slammed! We followed the mob to the baggage claim. Then they switched our carousel 3 different times. Once we finally made our way down to Magical Express, the kid was cranky. We waited close to an hour to get on. 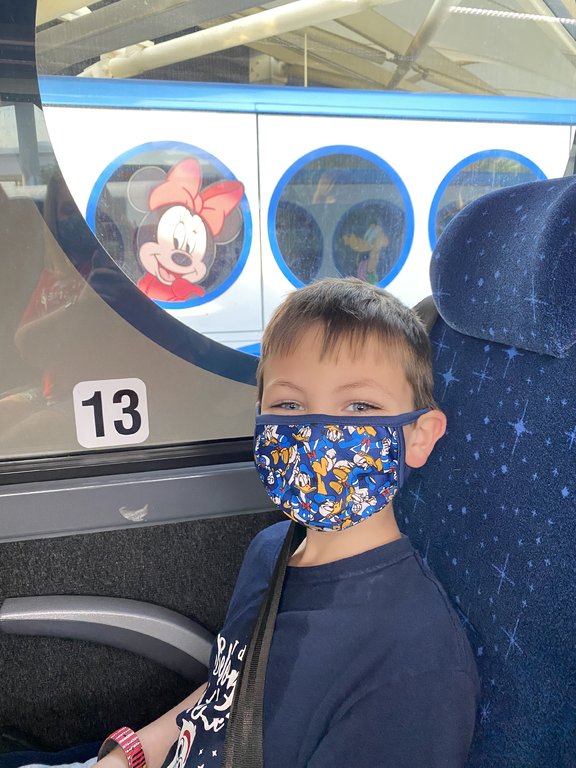 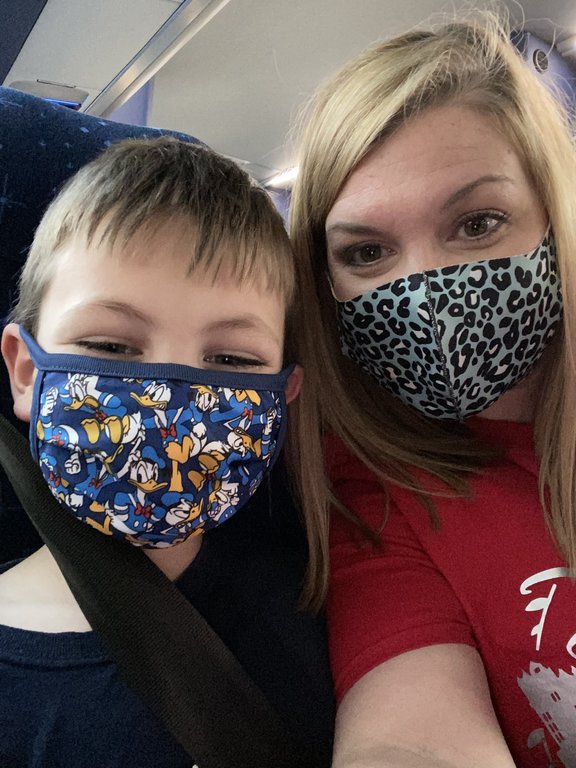 He was happy now. We were the first drop off. On the way, I hopped on the open table app and grabbed a 7:30 reservation at Big River Grille on the Boardwalk. I had gotten the room ready text so we went straight to our room which was room 3111. We get there and our magic bands would not open the door. I tried to use my phone and it would not open the door either. Josh decided to go down to the front desk and I continued to try using our bands and phone. Finally after many attempts, my phone opened the door. By now, it was 7:30. We threw our bags in the room and left. We were only 12 minutes late and were seated almost immediately.

We were so hungry that I didn't even think to take pictures of the food. Cam and I both got burgers and they were good. Josh got the mac and cheese with bacon and chicken. He said it was good, but bland. Overall, it was good enough for a last minute reservation. We sat near the window so we had a nice view during dinner. 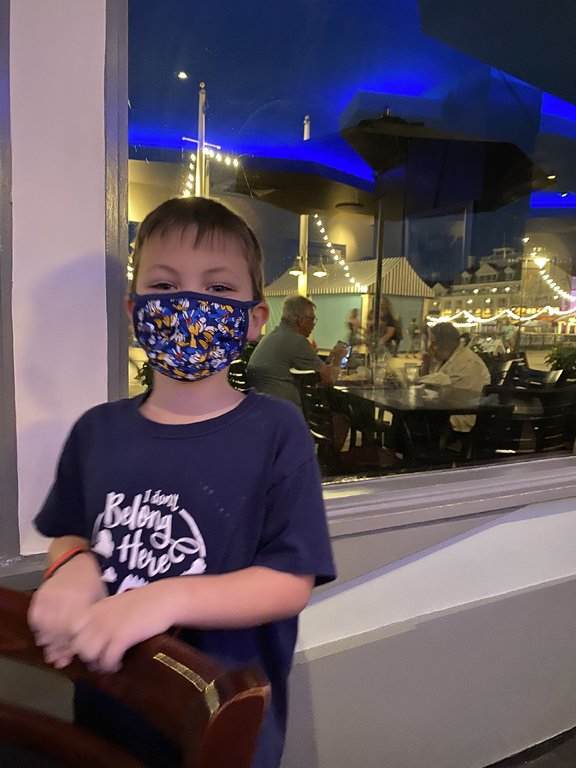 I felt sorry for the couple in this picture. There were two children at the table next to them that had the bubble wands going and they were getting bombarded with bubbles during their entire meal. I'm not sure I'd enjoy soapy bubbles landing all over my food. 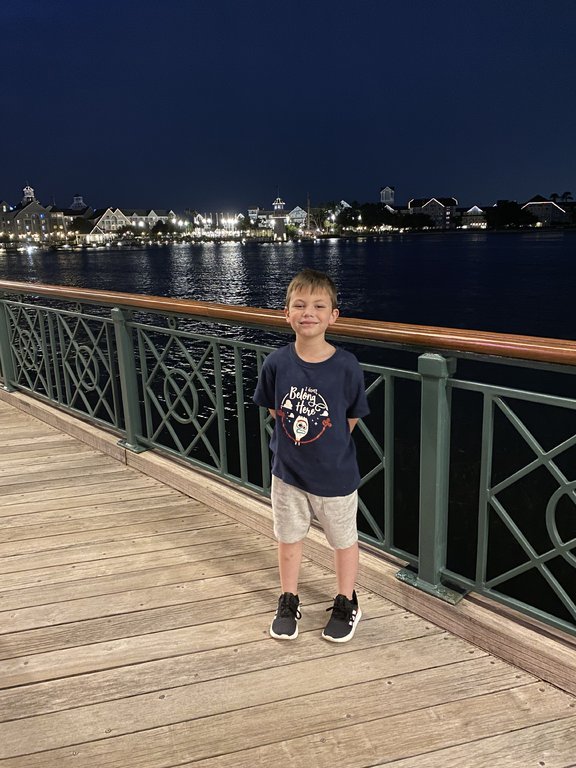 It was a beautiful night, but we were tired and ready to get settled in. I had gotten a message from the front desk at dinner saying we needed to come by and have them recode our bands or something, so we stopped by. We got to the room and my band still didn't work, but my son's opened the door. I should note that once I got my phone to open the door earlier, I called Josh to come back so he had never made it to the front desk, but we called to let them know what was going on. Then someone called us back to tell us to come by because they couldn't figure it out.

Original Poster
Some room photos before we unpacked: 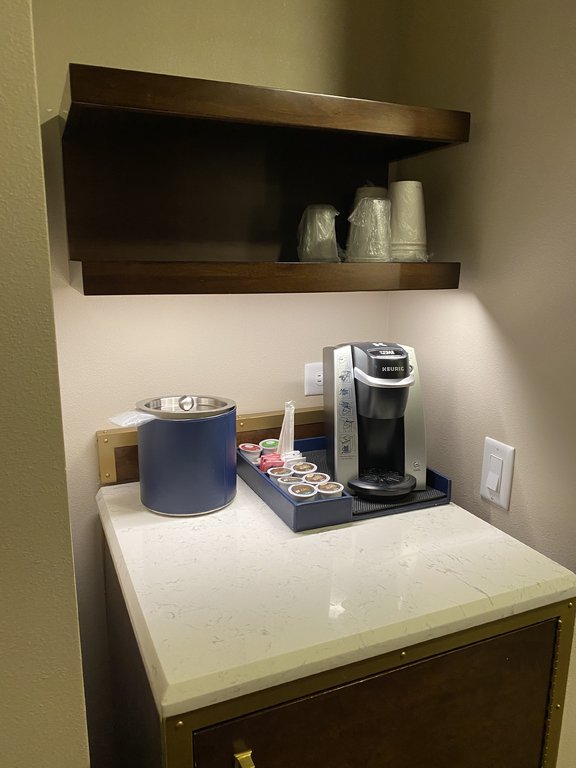 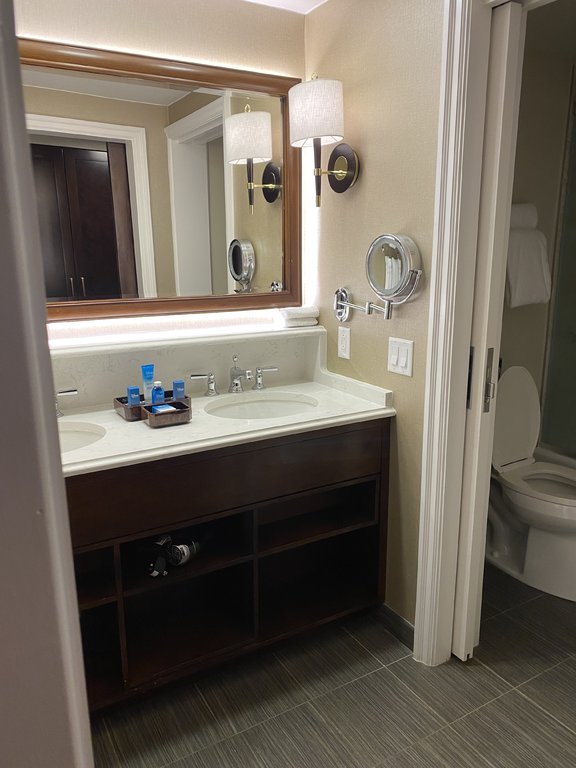 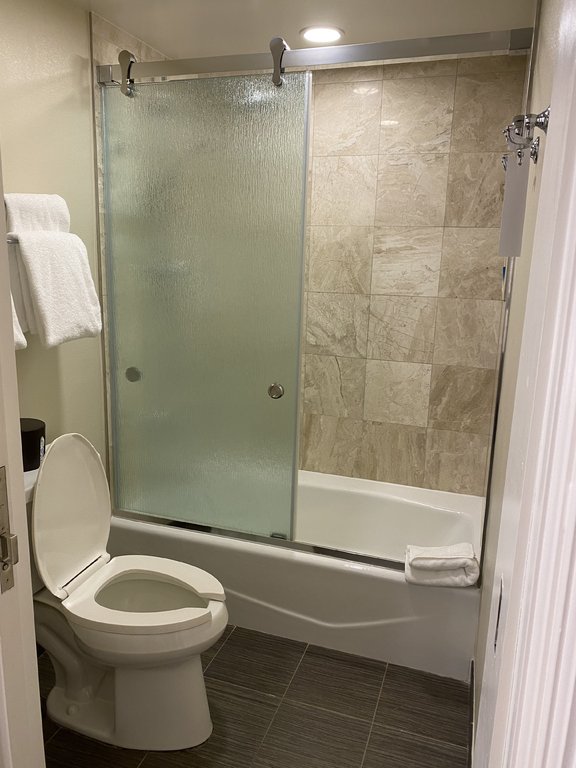 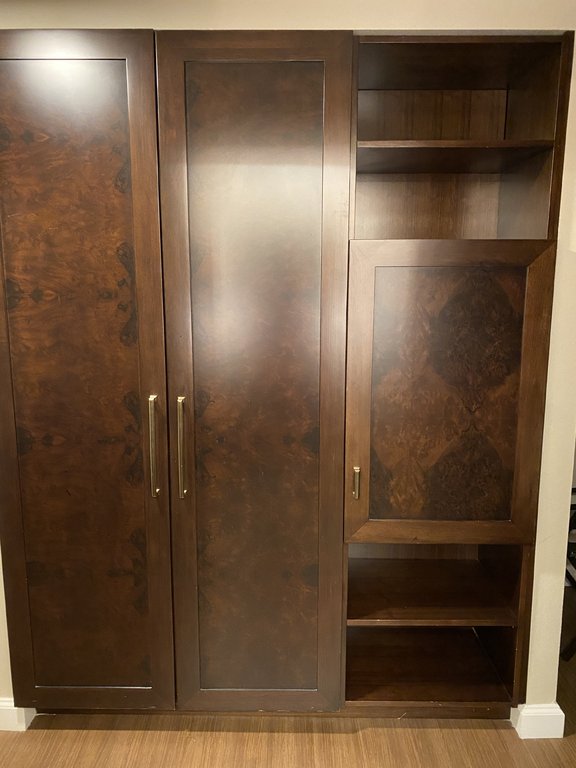 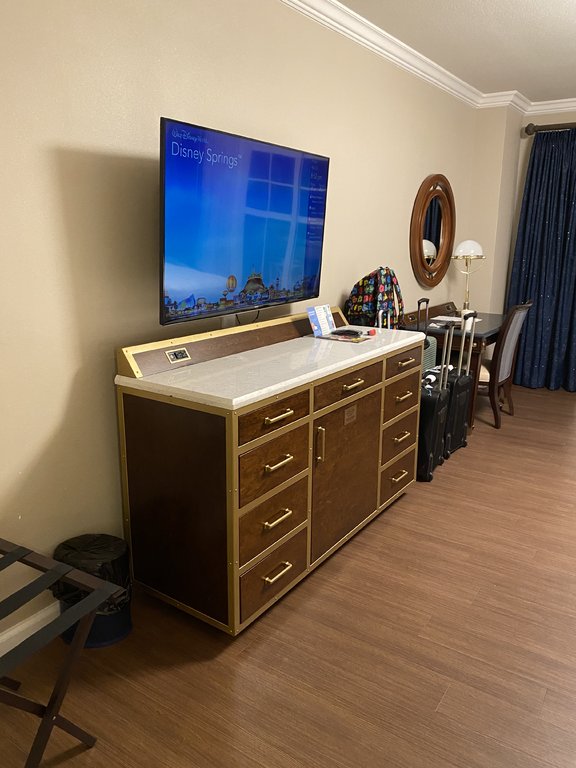 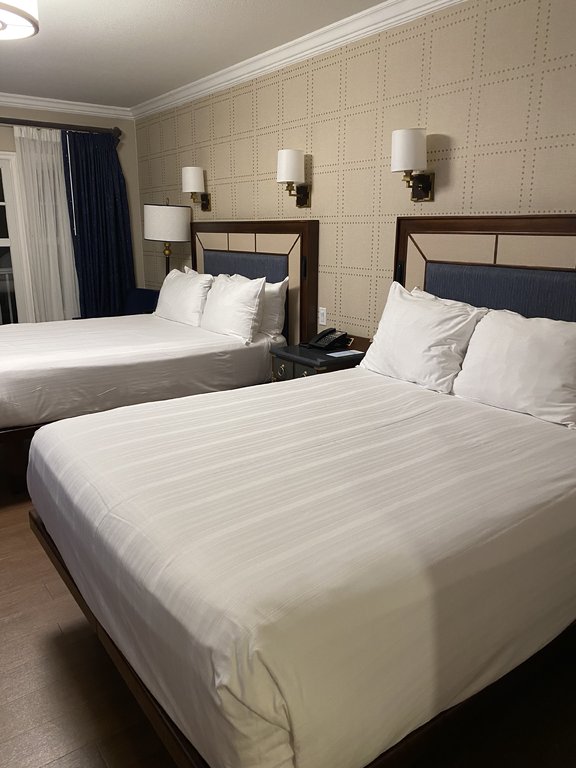 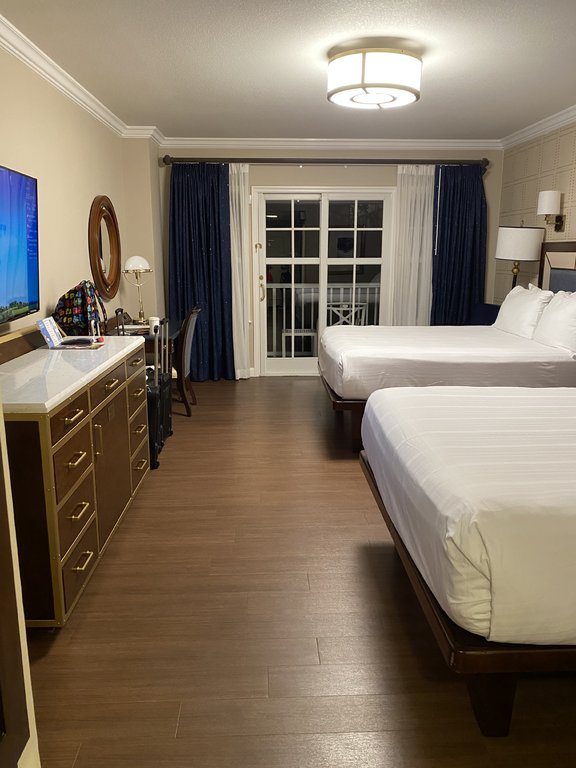 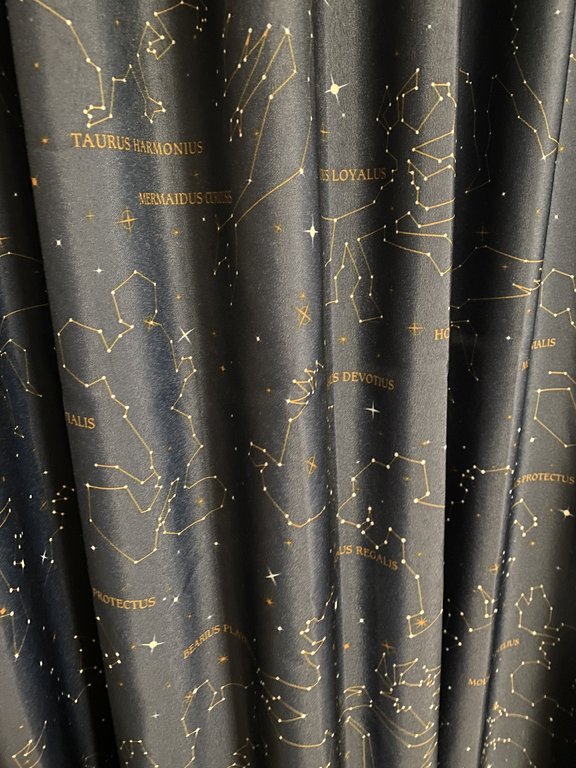 Premium Member
If there were an award for “smiling with your eyes”, Cam would win it!! 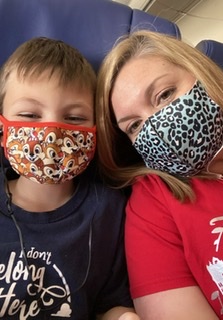 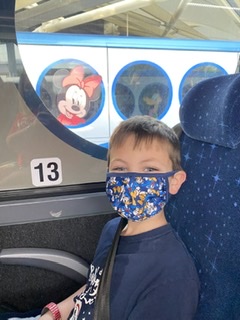 His expressions made ME smile.

For the record I fell asleep about 40 minutes into Soul. I really wanted to like it, but it felt like a poor knock off of Inside Out (which I loved).

I agree with @Tuvalu. I watched all of Soul and felt let down at the end. Plus it confused me. Den came in the middle of it and said what is going on. I said, I don't know

Brin and Cam only made it about 30 minutes and then they were off playing with their toys.

Cam is adorable and I can't believe how much he has grown up!! Loving this!

Premium Member
So excited to read along! Happy you all are happy and healthy now!!!

Premium Member
I'm in for the fun! I also wasn't that into Soul, I fell asleep for the last 20 minutes. I was hoping for more jazz music but it didn't seem that jazzy to me. I've been meaning to give it a rewatch but haven't yet.

In and enjoying following along!

Following! I’m excited to read a new TR from you! Cam is adorable! I was not a fan of Soul either. I stuck it out to the end. I probably wouldn’t watch it again.

Premium Member
I’m in for the fun!

Tuvalu said:
If there were an award for “smiling with your eyes”, Cam would win it!!

For the record I fell asleep about 40 minutes into Soul. I really wanted to like it, but it felt like a poor knock off of Inside Out (which I loved).
Click to expand...

Aww - he is the sweetest!

Glad I'm not the only one.

littleroo said:
I agree with @Tuvalu. I watched all of Soul and felt let down at the end. Plus it confused me. Den came in the middle of it and said what is going on. I said, I don't know

Brin and Cam only made it about 30 minutes and then they were off playing with their toys.

Cam is adorable and I can't believe how much he has grown up!! Loving this!
Click to expand...

Another NO for Soul. This confirms that I won't be going back to it!