Following the Splash Mountain announcement, some are calling for a re-theme of another Disneyland attraction -- Pinocchio's Daring Journey.

insidethemagic.net
I notice they of course brought up the fact Splash is being rethemed
Last edited: Aug 12, 2020

Advertisement
One of the complainers calls for them to change it to Cinderella, but she’s also a slave, so how would that work?

Following the Splash Mountain announcement, some are calling for a re-theme of another Disneyland attraction -- Pinocchio's Daring Journey.

Are there concerning things in that ride? Yes... but purposely so. It was meant as a cautionary tale. Different people have different tolerances for disturbing images. Look how Alien and Stitch got sacked for being too scary.

I'm sure Disney has ample data from guest surveys to know if this attraction needs a revamp.

There's a live-action Pinocchio on the horizon. Does Pinocchio sell merch? That's more what Disney would care about.

Of course, in today's milieu of financial restraint, rethemes and revamps are at the bottom of the to-do list unless absolutely necessary. So... this little blip of a campaign's going nowhere.

I will say I consider this one of the weaker dark rides, though I wouldn’t be surprised if the “dark“ thematic elements were touched up. As mentioned rumors of a Tom Hanks-led live action Pinocchio in the works I don’t think they’d want to remove this entirely, though it could be improved a la Alice

Funny thing is that as a person if Italian American heritage I actually like having this representation in the parks, even though I’m sure that argument will pop up too as “cultural appropriation” (on my behalf of the country’s ever-woke anglicized saviors doubt).

Thankfully the whole slippery slope thing is just an unproven fallacy... amiright? At least the company is flush with cash right now.

The moral of Pinocchio is literally "be a good boy".

How is that bad now?
R

I’m calling for a re-theme of twitter. Actually no, just ban it

Animaniac93-98 said:
The moral of Pinocchio is literally "be a good boy".

The first person they quote reads very similarly to a comment from Cartoon Brew that I reposted over here and snidely responded to: 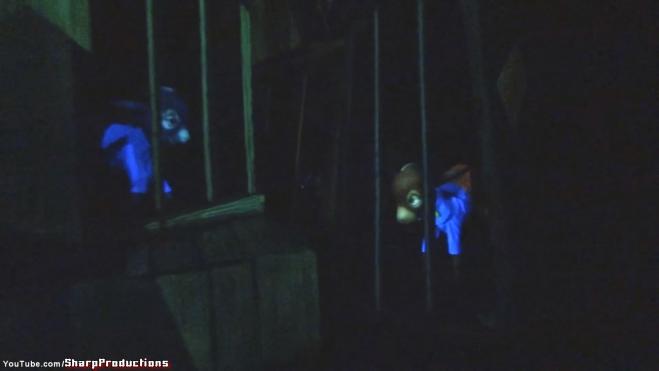 To the Disney company, if your reading this please stop. Your original animated movie Pinocchio 1940 made me upset with the child slavery and animal abuse scene. I'm upset with the Disneyland ride Pinocchio's Darling Journey as it depicts 2 donkeys being caged which upsets me very much, I hope they remove the child slavery reference and remove the cages from the 2 donkeys.
I didn't even like what Walt Disney was doing exposing people to child slavery to family audiences when he originally made the animated movie in 1940. Please Disney company, stop showing Pinocchio 1940 on Disney Plus or selling the Pinocchio DVDs and Blu-rays. Child slavery is a very sensitive topic for most families in today's world and this movie gave me negative feelings, I'm upset with the MPAA rating labeling calling it rated G when it should've been PG-13, I don't even like the original Pinocchio book as it also featured child slavery.
As for the Bambi remake, I could care less, as I was very bored with the original 1942 cartoon movie because the story was too slow and confusing for me to follow I still don't remember Bambi very well. I'm still disappointed with the way Disney remade Lion King which bored me the entire time, I'll see the original 1994 Lion King carton movie instead. I have no interest in a Bambi remake as it will be a cash grab film that I'm not interested in seeing.
I refuse to see the live action Pinocchio remake or support it as the Disney company is doing it for a cash grab and glorifying child slavery and animal cruelty which makes me sick. I'll see a better Disney film like Meet the Robinson's instead.
Click to expand...

I recall clicking on the user's profile and seeing a similar comment on two or three different sites, (assuming this is the same person) they seem to have quite the odd vendetta/obsession against Pinocchio's Daring Journey that they've had for at least over half a year now.

Yeah the letter in the article very clearly reads like a joke to me, which this site decided to pick up as actual news for some reason?

it’s not the happiest place to be on which is a ride that’s not family friendly.
Click to expand...

I hope so because the Pinocchio ride isn’t the happiest place to be in Disneyland.
Click to expand...

The Charmin Soft clan strikes again. I didn’t read the article because I don’t care to read what these fragile people have to say anymore.

Pinocchio's far from my favorite ride, but "it's a morality show that's not all sugar and goodness like I imagine Disney to be" is a terrible argument to change it.
C

Enough, it is time we stand up and tell these people to go fly a kite.

Leia was made a slave by Jabba the Hutt. That makes ALL of Star Wars tainted and objectionable. Hence, SW is not appropriate for "the Happiest Place on Earth" and as such Star Tours and Galaxy's Edge need to be demolished ASAP for the world's social well being.

Aren't these structures housing the dark rides grandfathered anyway, meaning they couldn't do anything dramatic with the rides anyway, even if they wanted to, without tearing down the whole structure (Snow White ride and all) and rebuilding from scratch? At best, they would have to settle for just lightening the tone, like the nearby Snow White ride.

And yet I ignored the people clamoring for Splash Mountain's change as just rumor-mongers, until I saw that Disney itself broke the news about it. So now, I frankly don't know what to believe anymore.
Last edited: Aug 13, 2020

Could they retheme it to Knott's Haunt maze Unstrung?

cmwade77 said:
Enough, it is time we stand up and tell these people to go fly a kite.
Click to expand...

I'm sure the dozens of them will cower at your might.

Looks like a clickbait article to me, nothing more. I wouldn’t even be surprised if the site made it up due to the current set of fan all being up in arms over Splash; clickbait material.

mharrington said:
Aren't these structures housing the dark rides grandfathered anyway, meaning they couldn't do anything dramatic with the rides anyway, even if they wanted to, without tearing down the whole structure (Snow White ride and all) and rebuilding from scratch? At best, they would have to settle for just lightening the tone, like the nearby Snow White ride.
Click to expand...

Not quite how it works. There is no requirement for demolition and there are different levels of renovation. They very much could replace the ride if desired.
You must log in or register to reply here.

Brawl Breaks Out at Cambria in Anaheim
2

TSI Meltdown Heard Around The Park
2