Trip Report A little bit of Disney and a lot of luaus!

Hello all!
We're back from our "Aulani, a Disney Resort & Spa" stay, and I'm finally able to get this trip report started!
(And fyi the closest I came to a spa was getting a water bubble foot bath at the kids splash area!)

Our party of 6 and a 1/2 consisted of myself Cindy, husband Gary, son Seth, daughter Aleisha (and the half), SIL Julio and our 20 month old granddaughter Una. (You may remember her as crazy girl from our Oct. 2021 WDW trip report.) Nothing has changed there!

Same cast of characters except in a different location! 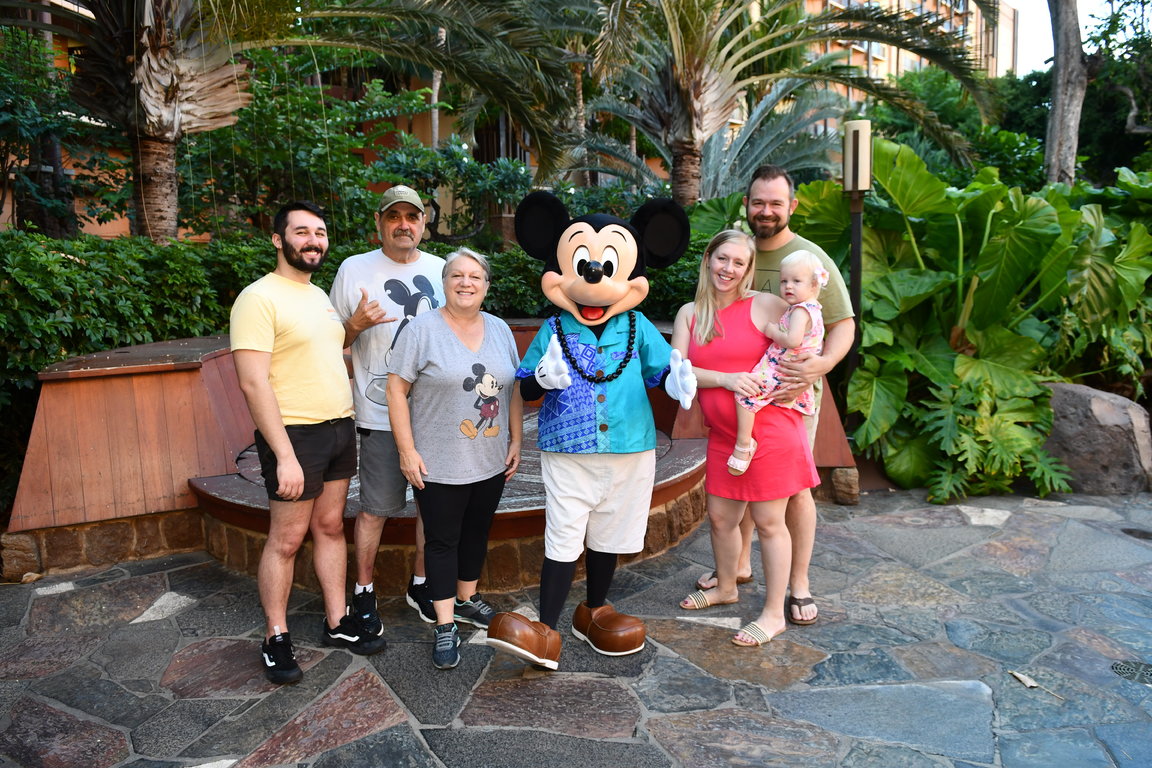 Before we left I bought myself a new (larger) suitcase for the trip. Someone may or may not have packed one and a half suitcases full of kid crap treasures and needed more space! When I retired my partners bought me the smaller version of this and I love it so much (and it's held up for 4 years of Disney adventures) so it made sense to buy the matching larger one! I'm glad they still offer the same pattern. 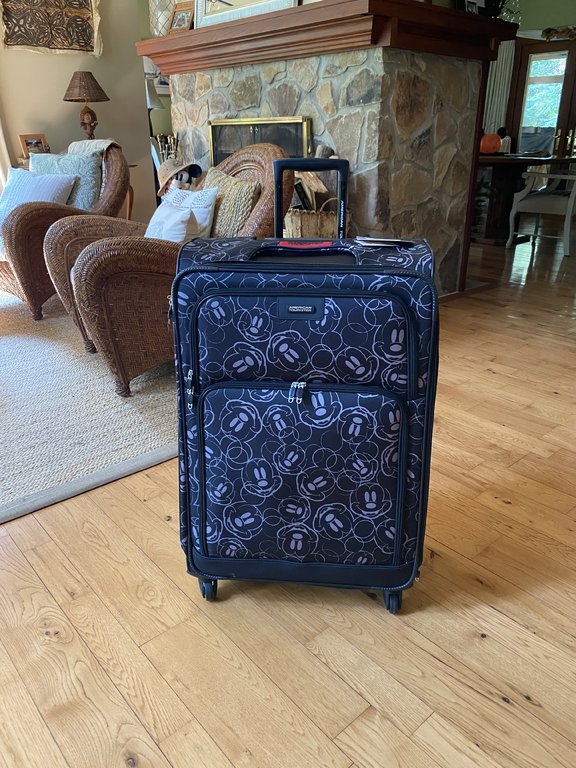 We packed up all of said stuff and headed to the airport. Our flight was at a reasonable 1:30pm so we didn't have to kill ourselves to get there.
I put this photo in to remind myself to never do this again. I wanted to save $3/day and so I parked in the economy lot. @riverside will be able to tell you how silly this decision was. There are no shuttles and it was a full on 20 minute walk with my annoying hip back to the terminal. You see that strip of brown there past my car? That is the highway surrounding the airport! But hey, I saved $3/day! 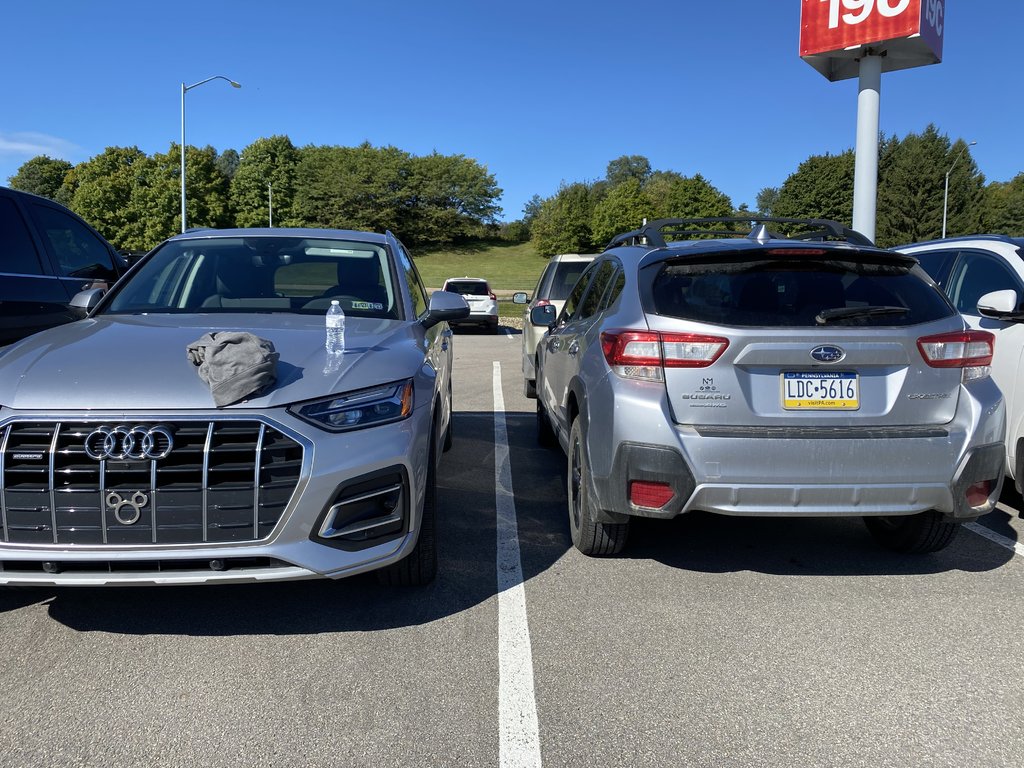 We got through security no problem that time of day and got on the monorail type thing that takes you from the land to air side.
And ps, I'm with every other human on the planet that is sick of mask wearing but Gary's oncologist has asked him to keep wearing them indoors as much as possible due to his immunocompromised state with ongoing chemo and so we do.
I tell everyone it's not going to be his cancer or covid that takes him out, it's going to be me.
See post of family fracas that occurs in a few days. 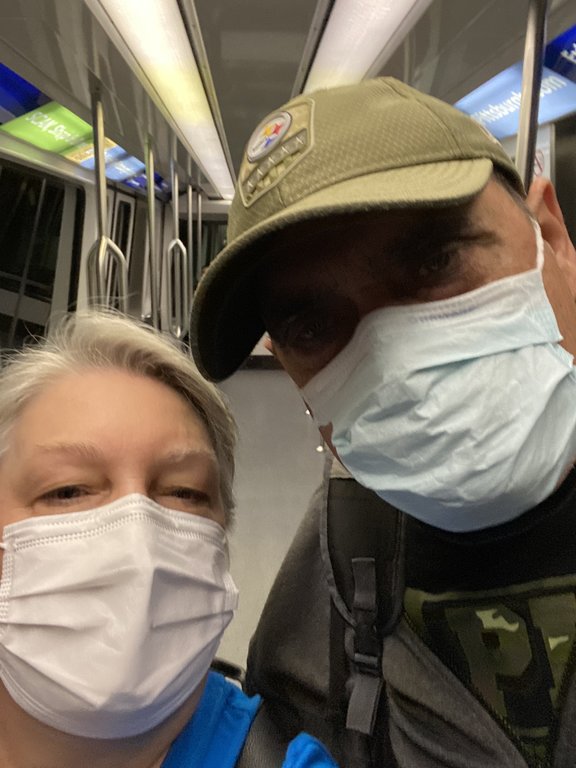 We had time to grab an early lunch so we shared Chick-fil-A nuggets, waffle fries and some Auntie Anne's nuggets.
He's happy, honestly! He doesn't earn those Grumpy shirts for nuthin! 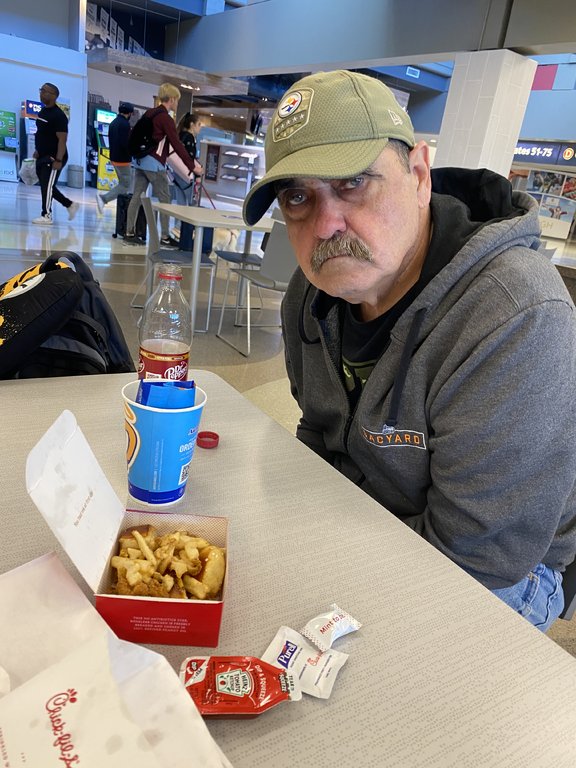 And then on to what started out as one of the most controversial subjects of this trip.
As his illness progresses and he gets more tired (and grumpy) I try to figure out how to make things less stressful and easier for him.
Flying has become something he detests. So I proposed for the first time in our life that we try to fly first/business class and see if it is any easier for him. If you hate it or feel it is not worth it, never again I tell him.
(Remember I'm the person too cheap to park closer, I don't throw money away either).
Oh boy did the grumping and complaining begin. That's too expensive, I don't want to do that and on and on. I finally wore him down and he acquiesced.
So, how do you think it went?

Give you a little hint, that's actually a smile behind that mask as he sits in his nice wide soft seat! 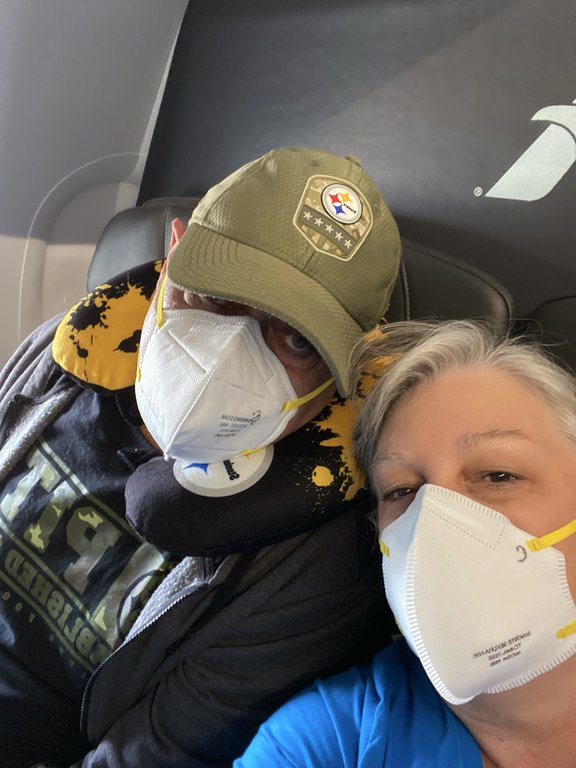 Do I get to do a wifely eyeball roll yet?!
Hope you'll stay tuned for more of our adventures!
Click to expand...

So glad you're here and I hope you don't get bored with lots of little people pics! Speaking of, how's little BES?!

MickeyCB said:
So glad you're here and I hope you don't get bored with lots of little people pics! Speaking of, how's little BES?!

Lil BES is good. (Well right now she is fighting bedtime with DH but otherwise good.

) She’s definitely a toddler and not baby anymore. 🥹

We’ll be taking her to WDW at 19 months so I am particularly interested in seeing what we have to look forward to (good and bad).

Premium Member
And I say this @MickeyCB as a fellow cheap person- close parking at the airport is worth every dollar.

Original Poster
Picking up where we left off...Day 1, travel to Sac day.

As I've noted above this was our first time in first class so we were a little uncool.
I took pics and we pretended to be special!

Gary didn't know what to do with himself when they offered him a drink before takeoff. But, what really blew his mind was they bring this little warm towel around that I figured out wasn't for a headache (I guess that's a cool washcloth) but rather to wash off your dirty paws. Keep in mind this is my country boy here!
And for anyone reading all of this that's well versed in first class travel this will be boring for you and feel free to scroll right past! 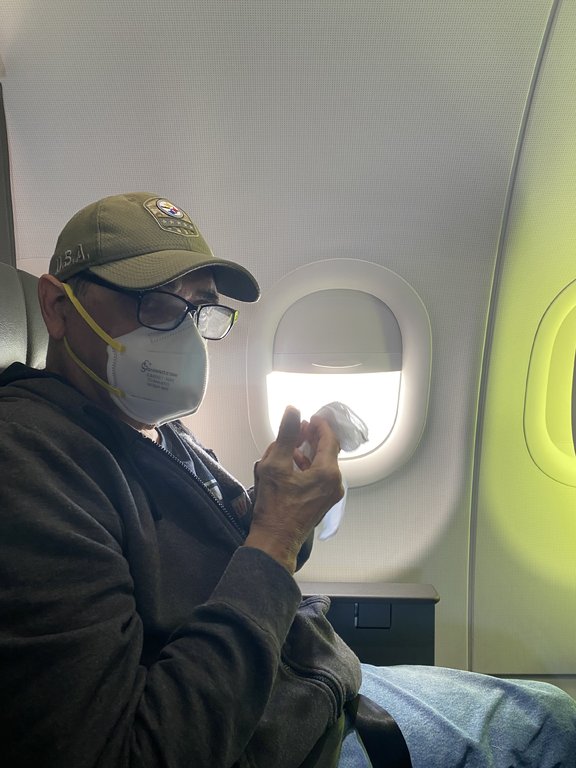 You could pre-order meals on their website and with his ongoing picky eating history I thought that was a good idea.
He ordered the fruit and cheese tray. He took a bite of what we realized later was hummus stating it was horrible would I like to try it? Umm, no. Why would I if it's terrible?
The little brownie thing was delicious. 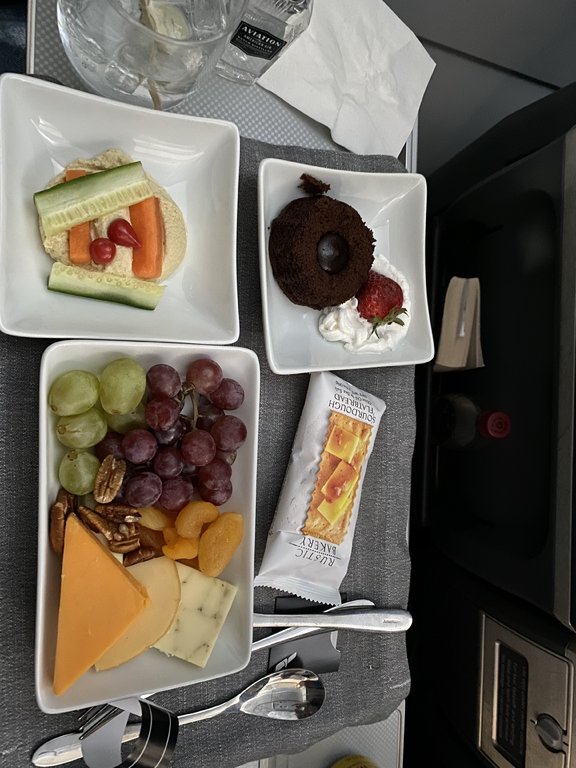 I ordered the chicken salad that was quite good. 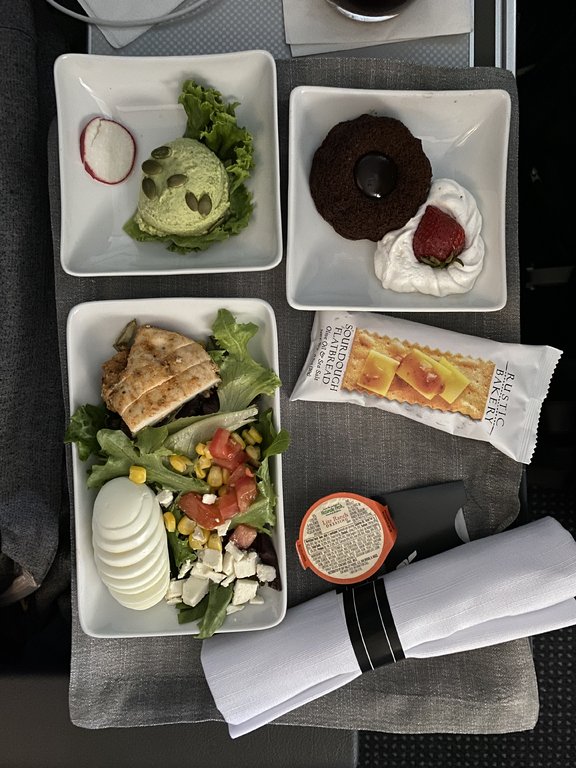 The one thing in addition to comfortable seats with first class, is just being served and the time it takes to eat is nice because it chews up a fair amount of time. And fairly quickly we were landing in Dallas.
So far no complaints from him.

There was a very nice couple seated opposite us who live in Dallas who explained how we should catch the ?sky liner, to our next gate. It was very helpful information.

A very cool thing that I think all of the ladies will appreciate is in the female bathrooms (can't speak for the men's) in the DFW airport all of the doors have a light above them that when you step in the stall and close the door there is a light above that turns red so you know someone is in the stall. No more bending over to see if there are feet in there! I think that is very clever. 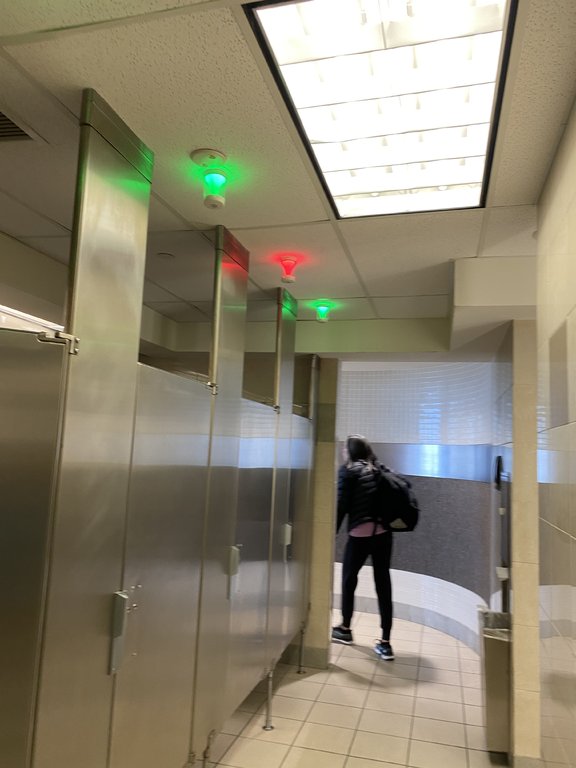 We only had about an hour or so between flights and we were ready to board for Sacramento.

One thing that I was ecstatic about this trip was we did not have one single delayed flight. Maybe because @Darstarr was on the east coast?!
There was a hurricane on the east coast while we were in Hawaii, just sayin....
We boarded and while we were waiting to take off they offered Gary a gin an tonic. He thought he'd died and went to heaven!
Once we were in the air they brought around these little dishes of warm nuts. Again Gary is delighted. Cashews are his favorite!
He's making sure you don't miss them. He's like a little kid at this point. Apparently the first flights meals were considered lunch and this one offers dinner. 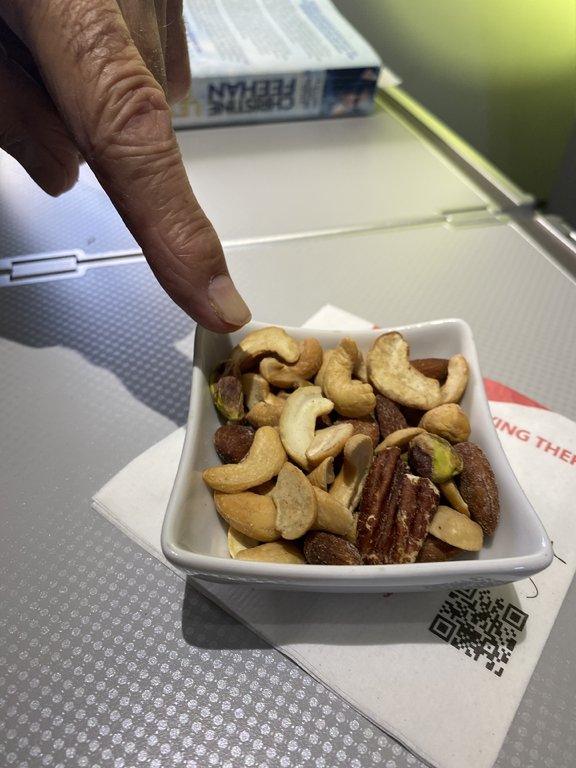 We both had ordered the chicken and potatoes (don't remember what kind) and it was all good.
They bring a basket of warm rolls around for you to pick what type you want.

It was after this next picture, and with his gin an tonic in hand that Gary said, "this is the best flight I've ever been on"! 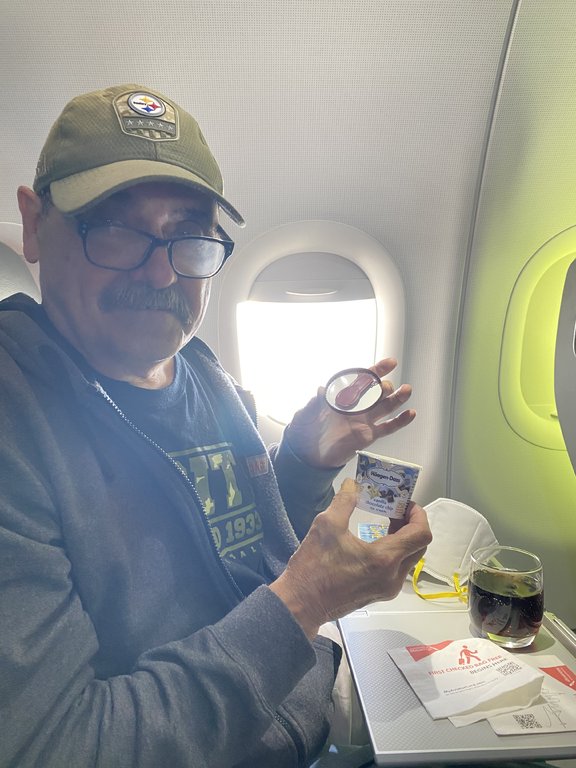 After all of those fun treats we were ready to land in Sac.
As we made our way to get our luggage there were these really cool sculptures in the baggage area.
Gigantic tall piles of old fashioned luggage and trunks. 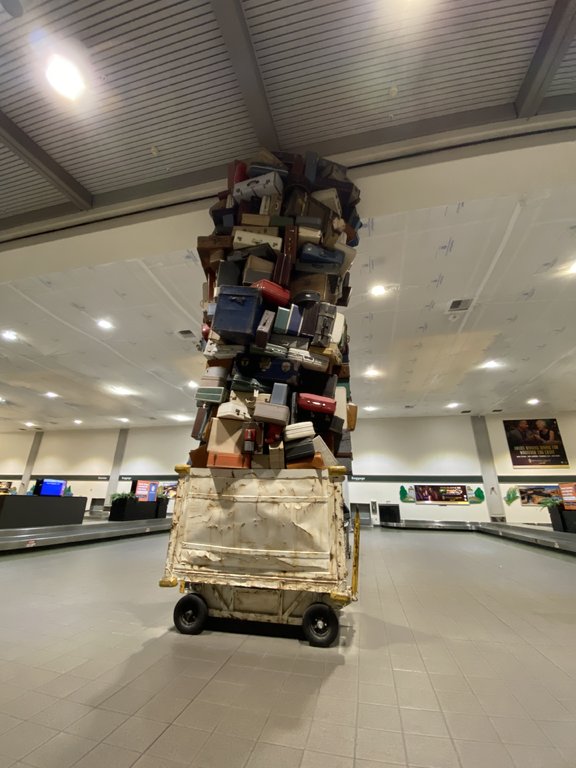 There was some confusion with the luggage coming out on a different belt than was posted but that all got sorted out and we grabbed our luggage and went outside to wait for Aleisha to pick us up.
There is absolutely no one on the planet who is more chronically late than her and it makes me wild!
And, she of course wasn't there and was annoyed with me when I pointed that fact out. Grrrrrrr

When we got to their house it was very close to Una's bedtime so we didn't give her any of her presents except a book because Aleisha said she would never be able to get her to go to sleep.
So that fun, and it was, would have to wait for the AM.

We tried to stay up a little but it was hard because it was already midnight in Pittsburgh, but we knew it was going to be even harder once we got to Hawaii and that is 6 hours later than east coast time!

But tomorrow, I'm going to pick fruit for my breakfast drink!

Back!Elbow!Shoulders! said:
Oh I won’t get bored by adorable kid pictures at all

Lil BES is good. (Well right now she is fighting bedtime with DH but otherwise good.

) She’s definitely a toddler and not baby anymore. 🥹

We’ll be taking her to WDW at 19 months so I am particularly interested in seeing what we have to look forward to (good and bad).
Click to expand...

Let me just say this is a strong willed child!

Back!Elbow!Shoulders! said:
And I say this @MickeyCB as a fellow cheap person- close parking at the airport is worth every dollar.
Click to expand...

I promise, I learned my lesson!

MickeyCB said:
Let me just say this is a strong willed child!
Click to expand...

lol. That may be part of the reason I am interested. Bedtime is still in progress here.

Also first class has gin and tonics and ice cream?!?

And those bathroom stall lights are amazing!

Back!Elbow!Shoulders! said:
lol. That may be part of the reason I am interested. Bedtime is still in progress here.

Una is doing better but can still give them a run for their money. I think they are all in for a rude awakening come mid January!

Right?! Gary leans over and asks me what the people behind us are getting. (We're the last row of first class).
My reply was, the same thing you're going to be getting if you keep whining about not wanting first class. Nothing!

Back!Elbow!Shoulders! said:
And those bathroom stall lights are amazing!
Click to expand...

Some woman somewhere said, what if?!

Late, but so excited to hear about your adventures!

I also would park in the next town over to save $3!

Premium Member
Intrigued so far by your TR -- can't wait for more vacation experiences to come!

RememberWhen said:
Late, but so excited to hear about your adventures!
Click to expand...

Glad you're tagging along!

Yeah! You're up early this morning if the post time is any indication!!

I also would park in the next town over to save $3!