Hi All!
Back from another stay at WDW and it was different for sure!
We had a new traveler with us and definitely did Disney differently for that reason and a few others.

I would like to give you guys a heads up before you read any further.
If you have read my trip report from last year you may be aware that my husband (Gary) is being treated for cancer and there are some references in here to how he is doing, because that changed a lot of how we toured this year.
If you are uncomfortable following along because not everything is pixie dust in this report, I will not in any way be offended if you click away. (I much prefer a sexy vampire book myself to a story that has moments of sadness)!
Luckily there were some great family/baby/children moments that brought us joy and new memories were made!

So with warning given and to those who are going to hang around, let's begin!

Our group consisted of myself, Cindy, my husband Gary, my son Seth, my daughter Aleisha our son-in-law Julio and our now 10 month old granddaughter Una. (And PS, she is a crazy girl)!!
We stayed at Bay Lake Oct. 21-27th.

Cast and crew (and one of my favorite pics of the whole trip). 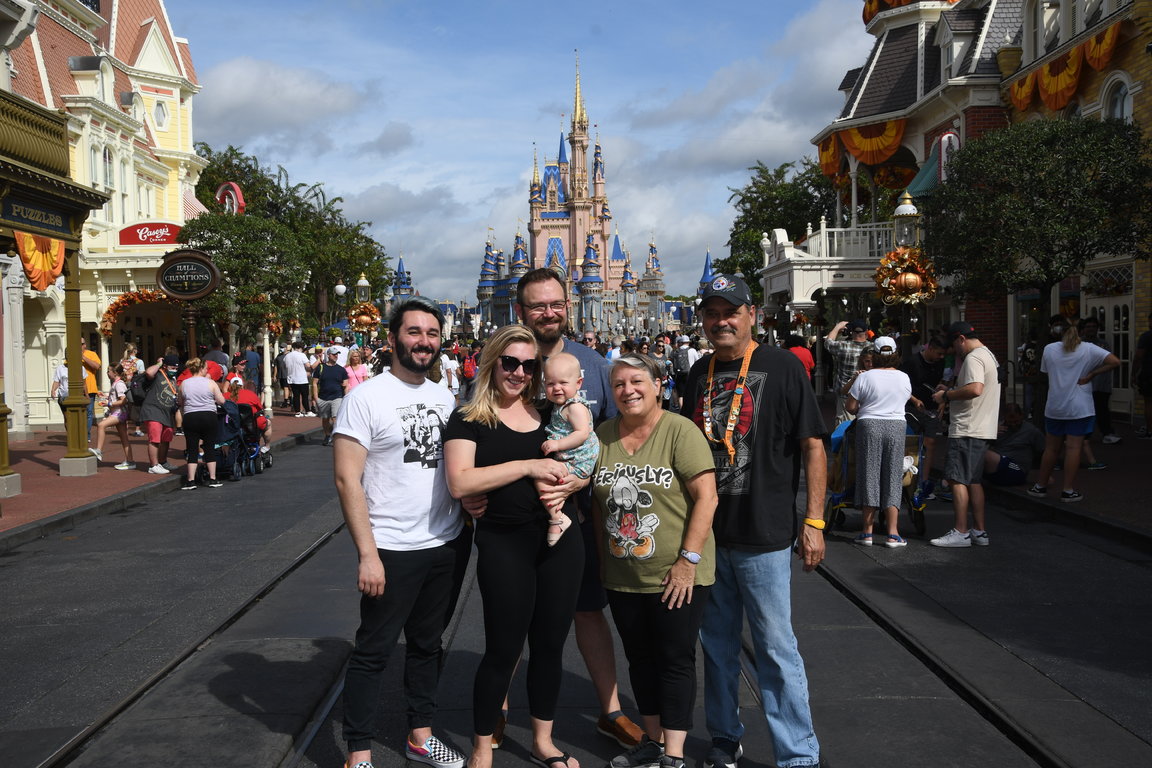 To arrive at Disney everyone was coming from different places at different times. Gary and I headed down from Pittsburgh with an afternoon flight. We left around 2:15 pm and got in close to 4:40 pm-ish.
Us headed to the air side on our version of the monorail. 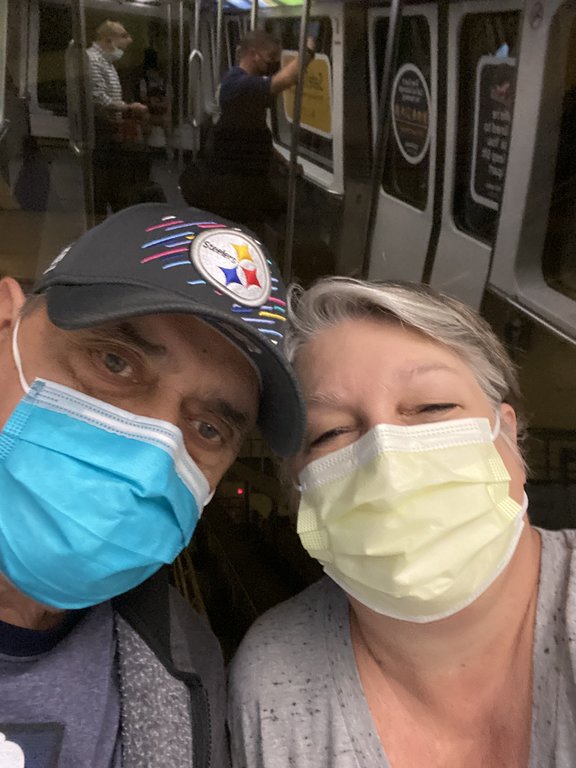 We had time to eat at Friday's (I think it was). Gary had some potato skins that he liked and I had a kids mac and cheese and french fries that I thought tasted pretty good. 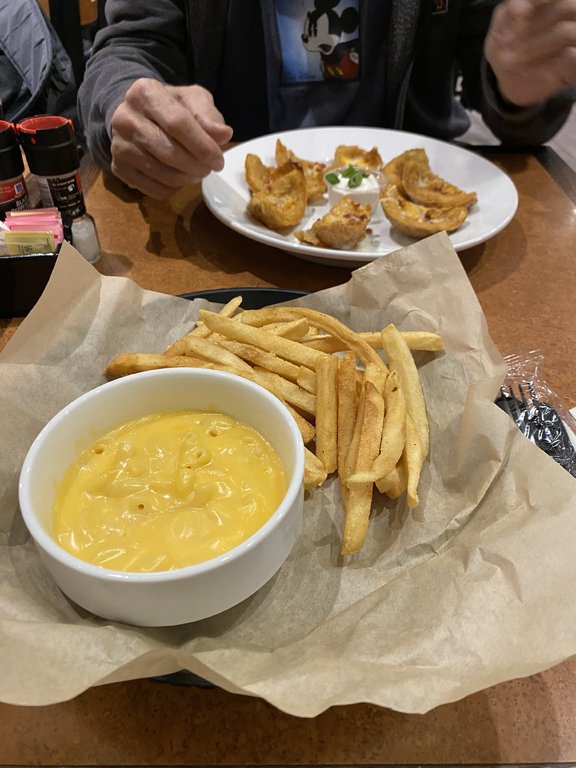 In the meantime my little sleepy head was headed to Orlando from Sacramento with her mom. They started out at 6 am-ish, west coast time. 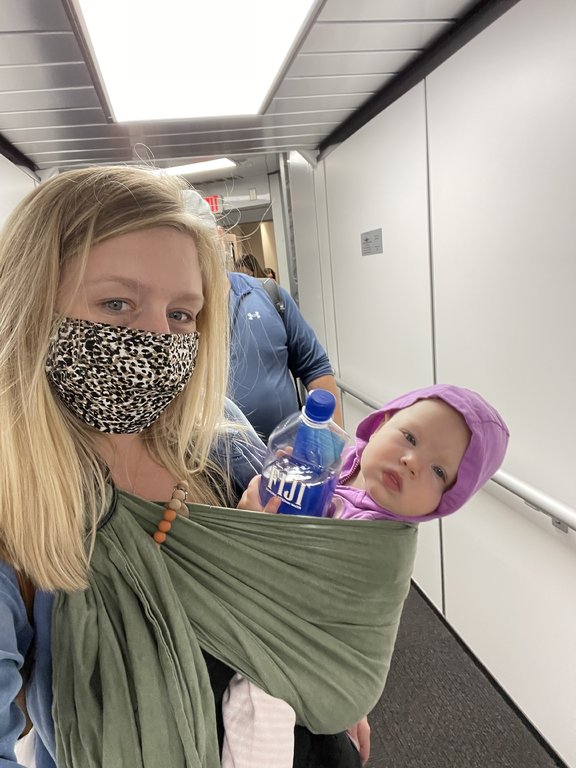 She did seem to perk up to her usual nosy self once they were on board! 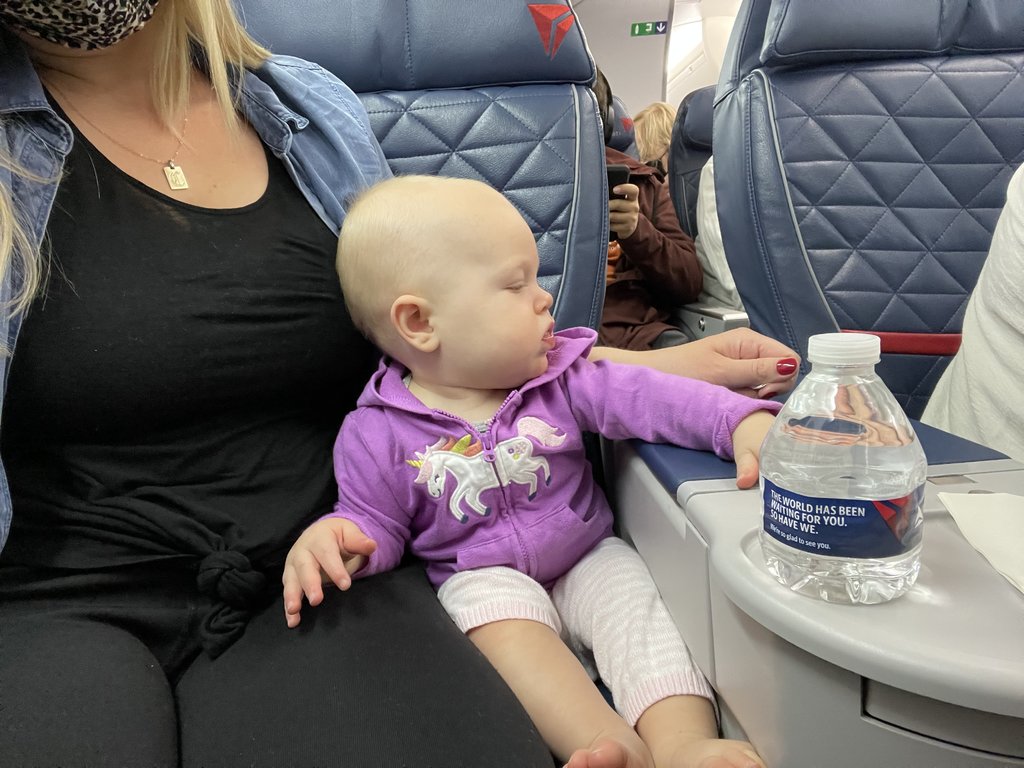 One thing you will notice this trip is a disproportionate amount of baby pictures! 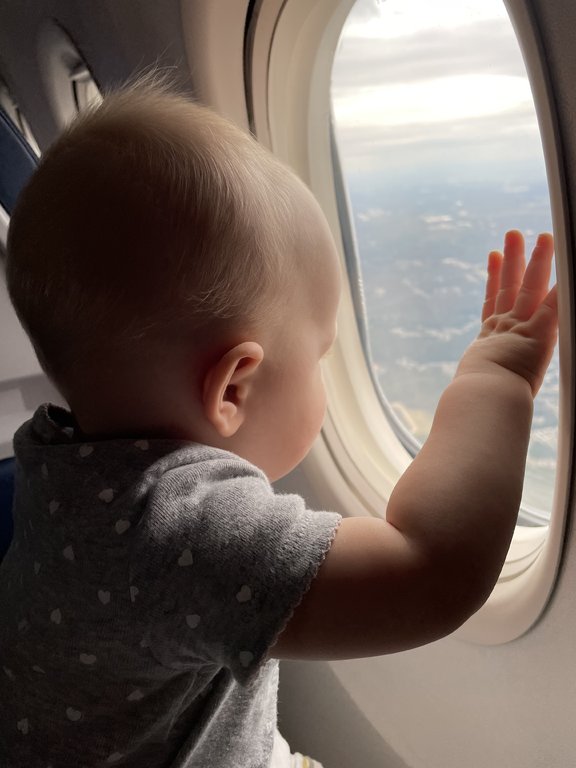 Seth headed down from Georgia, deciding to drive. 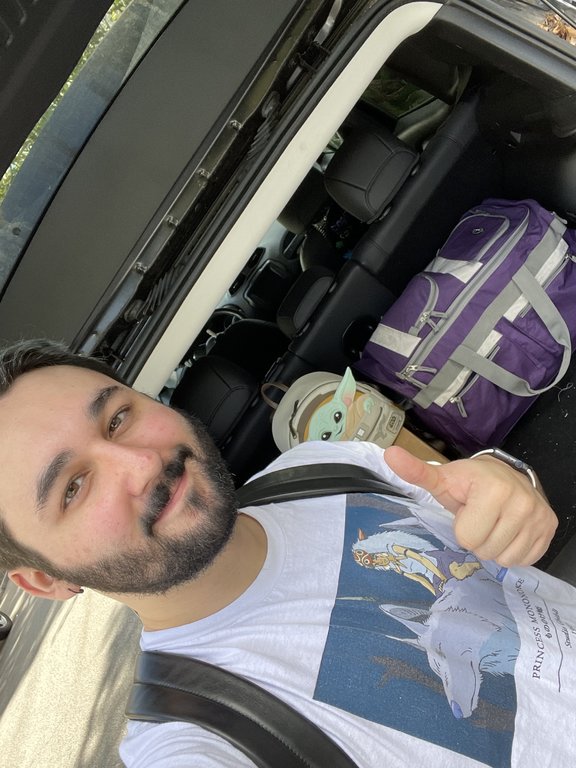 As crazy as it sounds, our 2 flights landed within 6 minutes of each other and we were able to meet Una and Aleisha as they got off of the monorail thing!
So excited to see this Mickey 50th wrap on one of the cars. 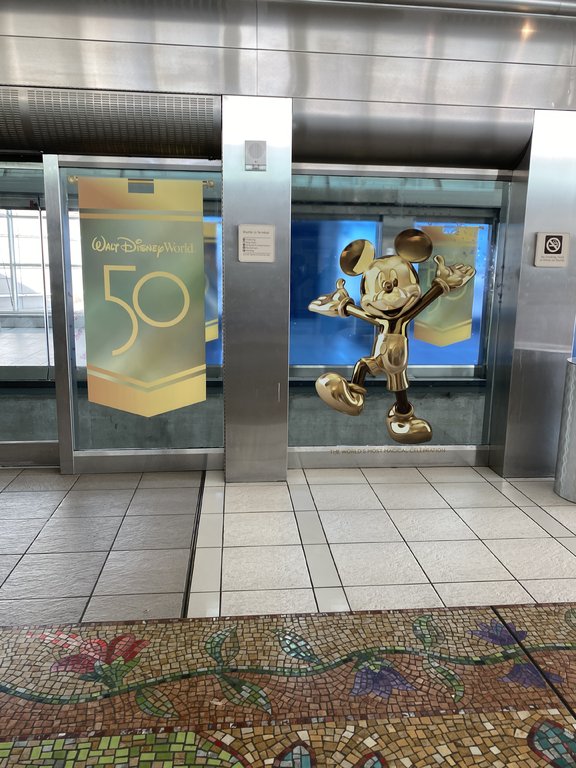 And Grandpap and Una's airport meet up!! 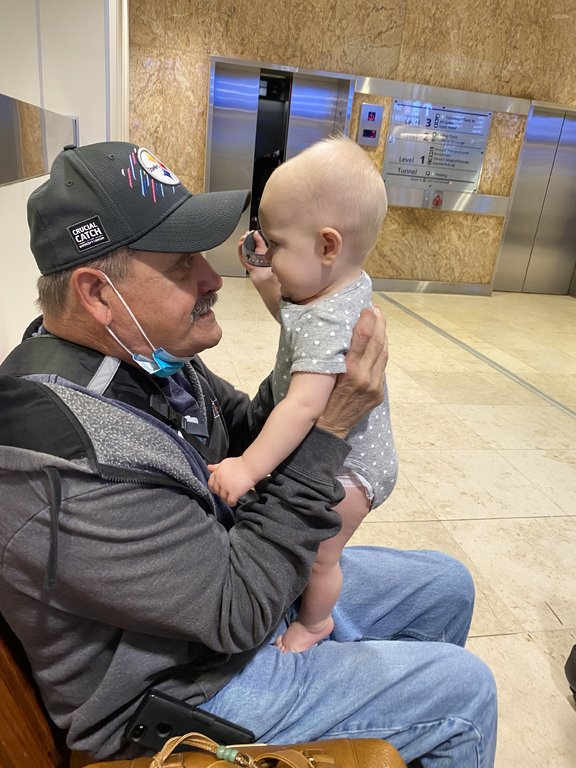 Julio wouldn't be arriving till the wee hours of Saturday am so we don't have any travel day pics of him.
Next up, is grabbing 800lbs of luggage and off to the Magic Bus!
Click to expand...

Yay! I can't wait to hear all about this trip, even if there are some non-pixie dustish moments!

And remember there’s no such thing as too many baby pictures.

TheMouseFan said:
Yay! I can't wait to hear all about this trip, even if there are some non-pixie dustish moments!
Click to expand...

So glad you will be following along, I'm still reading your report!

And remember there’s no such thing as too many baby pictures.
Click to expand...

Glad you're here and right?!?

Original Poster
We walked trudged our way to the 2 different luggage pick up areas, we were on Southwest and they were on Delta.
We retrieved 3 suitcases for us and a stroller we bought at home at a second hand shop that my daughter said was a lot better than their "bougie" stroller, and a heck of a lot cheaper. We are now the proud owners (and lugers) of what has been dubbed the East Coast stroller. Lucky us.

She gets to ride while the adults trudge. And I did clean that band before she started gnawing on it and quickly wiped the baby spit off before I handed to the poor unsuspecting CM! 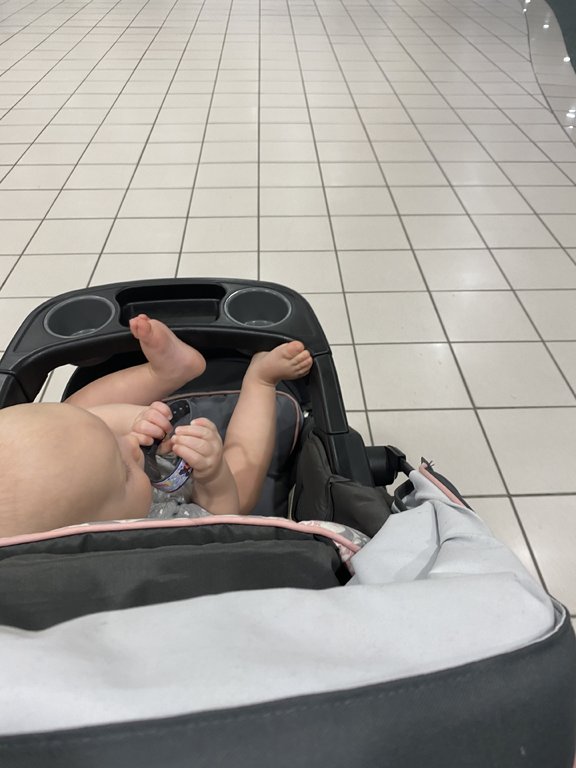 After that we re-crossed MCO to get to the Magic Bus. But, would we really? No. We were put on a boring white bus with no Disney graphics. And as it will be our last ride due to their stopping that service we were excited to ride it one more time. My daughter though, thought she could at least get a pic of us in front of a real Magic bus, she had us stand in front of the bus parked beside ours. As we started to take the picture the driver of the graphic bus yelled at us and said we weren't allowed to do that. For Pete's sake!
She did manage to snap a quick pic. 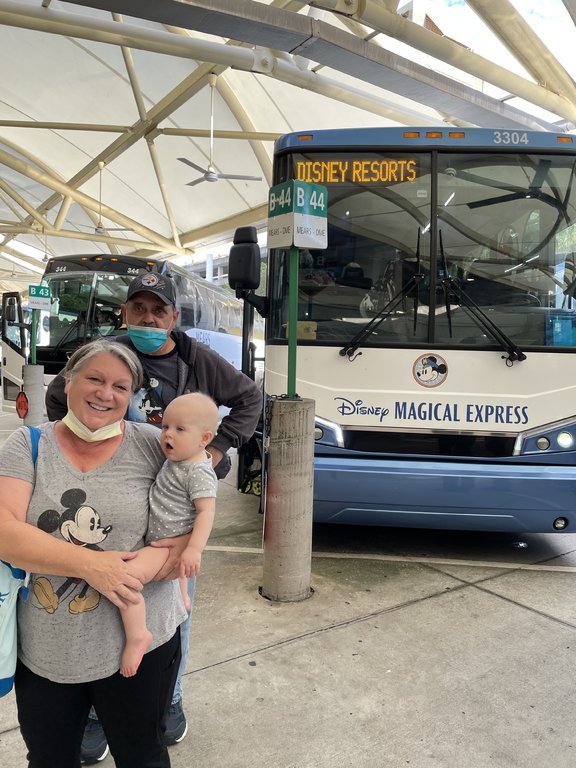 Once we got on the bus the mayhem proceeded to commence. (Car seats are a Magical thing)! 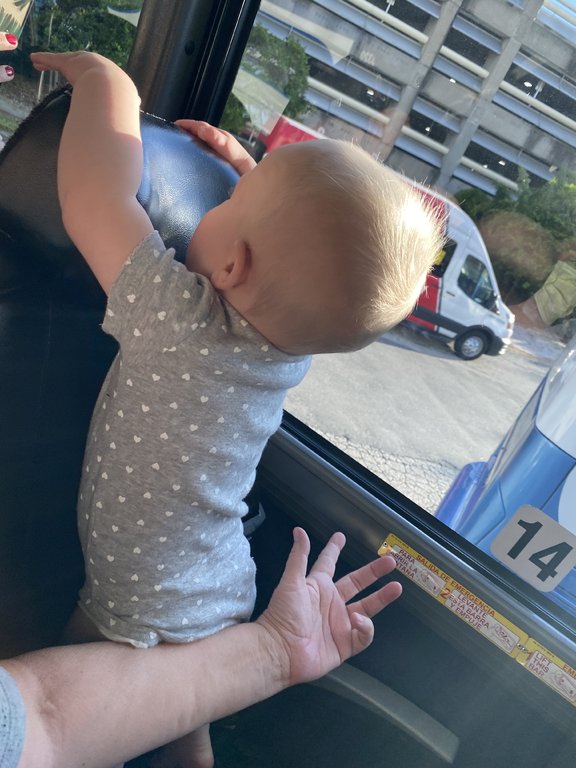 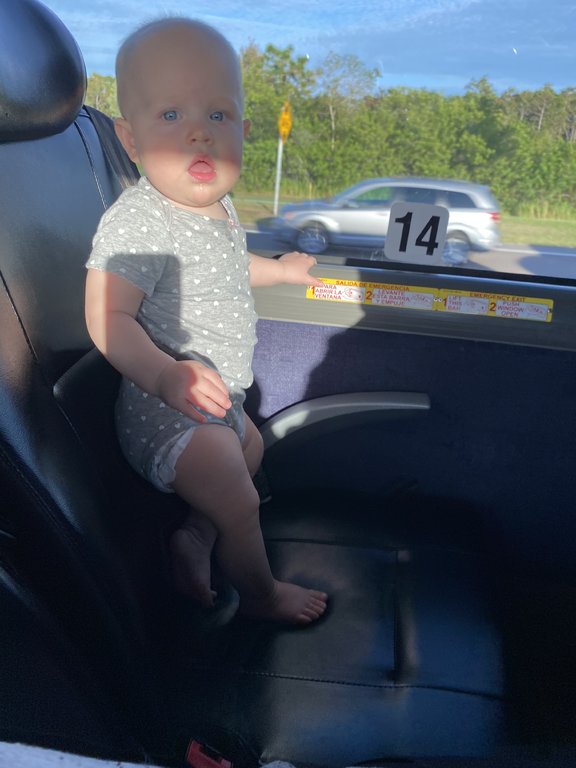 And we're finally "home"!!
It was so exciting, because at the same exact time we arrived, Seth was pulling into the parking lot!

As we were driving to the hotel I got our room ready txt and email. It was on one of the lower floors, I can't remember, maybe the 5th.
We had reserved a theme park view with a request for a high floor, because with the baby and Gary's energy levels I knew we were probably going to have a fair number of early nights and I thought it would be great to be able to watch the fireworks from the balcony. When I reserved the room they hadn't even announced the return of the fireworks yet, so I was super excited that occurred before we got there.

When we checked in CM Ginnie became my new best friend. I asked her if they had any higher level rooms and it took her all of 5 minutes to get us a room significantly higher up. When we got into the room this was the view! (I have about 10 more of these pics at different times of the day I will bore you with later)! It becomes stunning in the evening with all of the lights on at the MK, and around the lake. 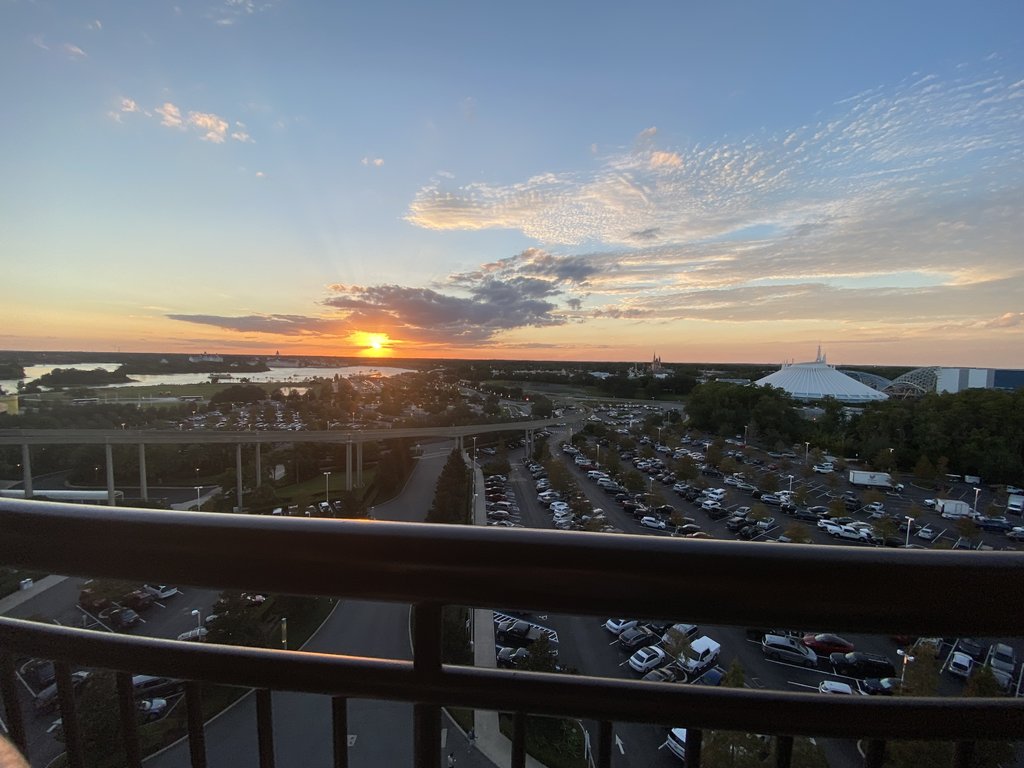 But, there was one little snag in the balcony plans, can you guess?
Yep, crazy girl.
The second we stepped out on the balcony to check out the view, she went straight to the railing and I don't have the pic of her right foot going up to the ledge because we were diving to prevent that!
And I pinky promise there is no way that railing is up to current code! For the rest of the trip the balcony door remained locked unless we were physically out there. 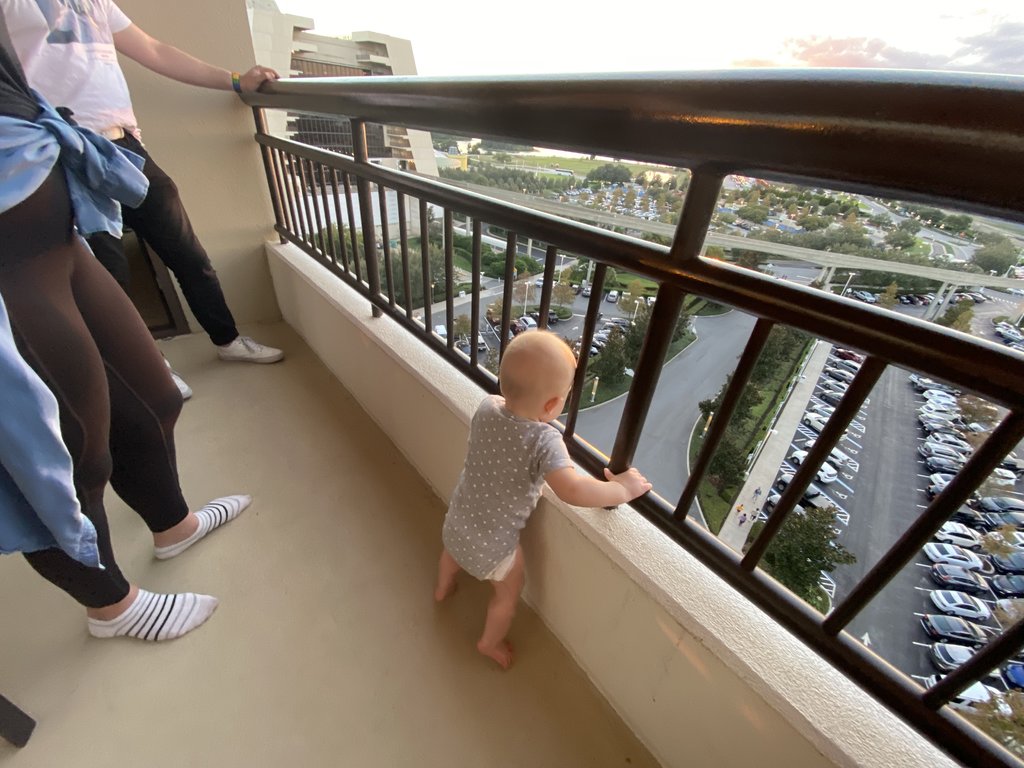 So, anyone keeping score? About 2 hours into the game, 4 adults 0, Baby 2.
The 3 adults minus the photographer. And crazy girl. 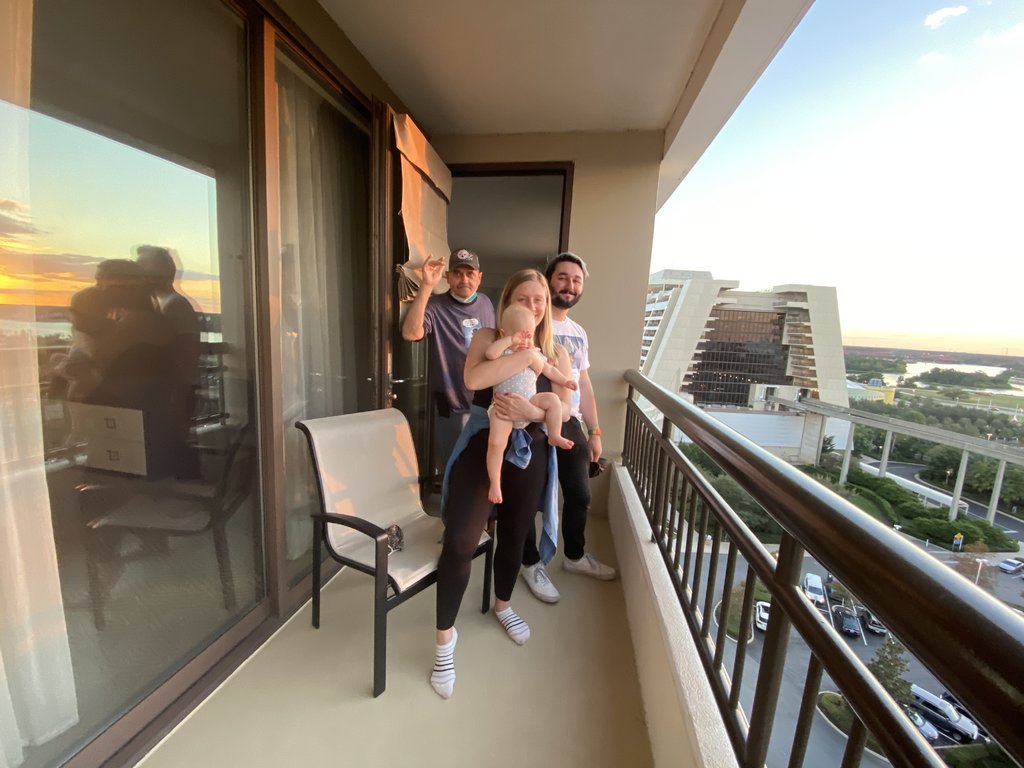 And one thing I noticed in retrospect this trip, is I took a lot less photos than we usually do. I suspect chasing you know who around was the primary reason. I say this as I usually take thorough room pics for everyone to see and realized I only got the second bedroom bathroom!

Sorry.
It's a 2 bedroom at Bay Lake, there has to be a ton of photos on line!

After we dropped our luggage Gary, Seth and I walked over to the MK to initiate our AP's. It was a nice walk over. 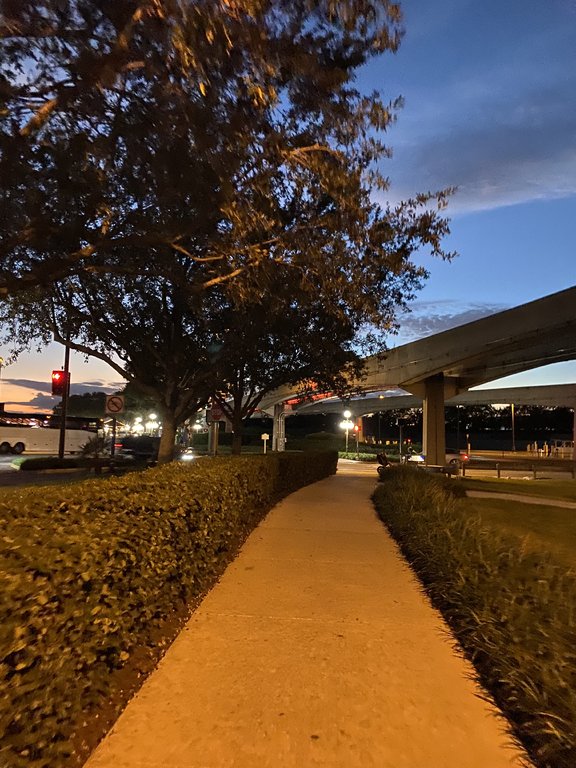 And then we mobile ordered from Contempo and Seth and I walked over to get the food. We each picked up one of the 50th resort mugs which I really liked. This is a pic from the bridge that connects Bay Lake to the Contemporary facing Bay Lake. I thought it was artsy, Seth disagreed! Brat. He goes to SCAD in Savannah and has higher standards than I do! 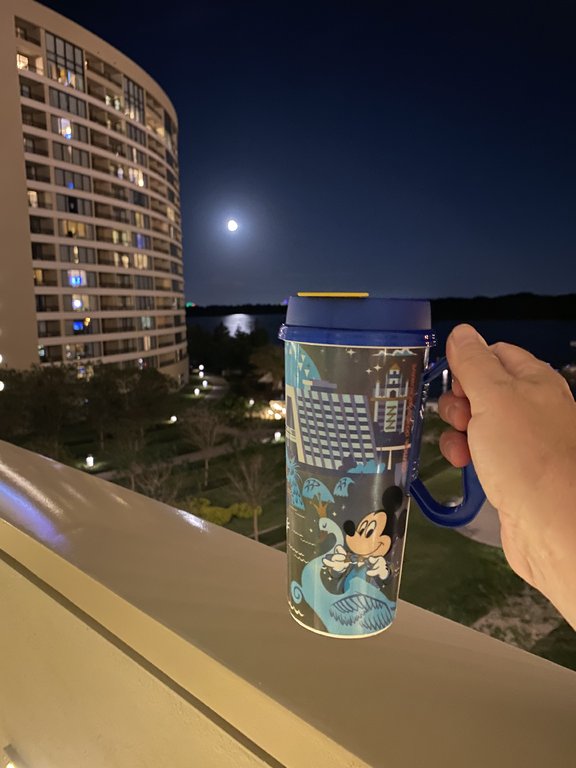 We ate dinner and all went to sleep, even little Una who was still bouncing off the walls at 9 pm. (6 pm her time).
Tomorrow will be a busy day at Animal Kingdom!

You know I’ll be following along!

Following along! And of course, Go Steelers!

Ginnie from Brooklyn is one of my absolute favorite CM’s of all time!
Loving the trip report and the family pictures!

MickeyCB said:
One thing you will notice this trip is a disproportionate amount of baby pictures!

Looking forward to reading all about yours.

Premium Member
It looks like your trip was full of baby adventure! Looking forward to seeing more.

Loco_driver said:
You know I’ll be following along!
Click to expand...

Thank you so much!!

meggo819 said:
Following along! And of course, Go Steelers!
Click to expand...

Yes! Glad you're here and "Here we Go"