Kyle Larson has been announced as the driver of the 5 car for Hendrick Motorsports starting 2021. It is a multi year deal.

wdwfan4ver said:
Kyle Larson has been announced as the driver of the 5 car for Hendrick Motorsports starting 2021. It is a multi year deal.
Click to expand...

Very happy to see the #5 car coming back. Now HMS, go and get Kelloggs as the sponsor and bring back that classic look.

wdwfan4ver said:
Jimmie Johnson is going to be sponsored by Carvana in Indycar.
Click to expand...

I just can't see Jimmie switching over to Indycar. Nothing against Indycar, but Jimmie has been a NASCAR star for many years, and I just can't wrap my head around him going to open-wheel racing, at this point.

Anyone else have an opinion on this new development for him?
W

MinnieM123 said:
I just can't see Jimmie switching over to Indycar. Nothing against Indycar, but Jimmie has been a NASCAR star for many years, and I just can't wrap my head around him going to open-wheel racing, at this point.

Anyone else have an opinion on this new development for him?
Click to expand...

I heard of NASCAR drivers that tried their hand in other series before or had plans to. Jimmie's is odd considering he's only doing road courses and street courses in Indycar for 2021. Jimmie was decent at road courses in NASCAR, but that was to me his weakest of the types of tracks he did in NASCAR.

His timing is odd considering Kurt Busch, Cale Yarborough, Donnie Allison and Bobby Allison raced open wheel races during their NASCAR careers at younger ages, but I understand why for Jimmie Johnson. The other thing is it is usually is open wheel drivers going to NASCAR.

The thing with Jimmie is NASCAR's cup schedule is so long that it discourages drivers racing open wheel racing events or sports car events like the 24 hours of Le Mans. Rick Hendrick is known not allow his drivers to race outside of NASCAR during NASCAR's season. I recalled reading about sponsors and teams actually limiting drivers

I don't see Jimmie winning a race in Indycar because he's starting at an old age compare to other drivers. The best way to put it is I think Jimmie would be the 1st or 2nd oldest driver in Indycar next year, but the experience isn't there. The last time a driver over 45 years old won in Indycar or CART was in 1995 and the driver was Emerson Fittipaldi. Emerson was 48 years old in 1995 and he had a lot of open wheel experience.

As far as NASCAR drivers trying something new late in their racing career, Earnhardt had plans of doing sports car events like the 24 hours of le man before the 2001 Daytona 500 fatal crash prevented that.
W

It was announced that William Byron's pit crew did not pit him at Texas and will not at Martinsville. Multiple members of the pit crew have covid-19. William Byron is using Ricky Stenhouse Jr's pit crew.
W

23XI Racing will be racing in Toyota's next year and has an agreement with Joe Gibbs Racing. Bubba Wallace's crew chief will be Mike Wheeler.
W

NASCAR announced they reviewed Kevin Harvick's and Erik Jones actions near the end of the Martinsville race and declared no penalties.

They reviewed Harvick due to complains about Kevin trying to get in the next chase round by gaining extra spot by trying to go pass Kyle Busch by wrecking.

Erik Jones actions were revealed due to radio conversation of Spotter telling Erik not to pass Denny Hamlin, so Denny can be in the final 4, but NASCAR still did not penalize Gibbs.

Kevin not being penalized is due other drivers did take other drivers out for a getting into the next round before like Newman did to Kyle Larson at Phoenix in 2014. 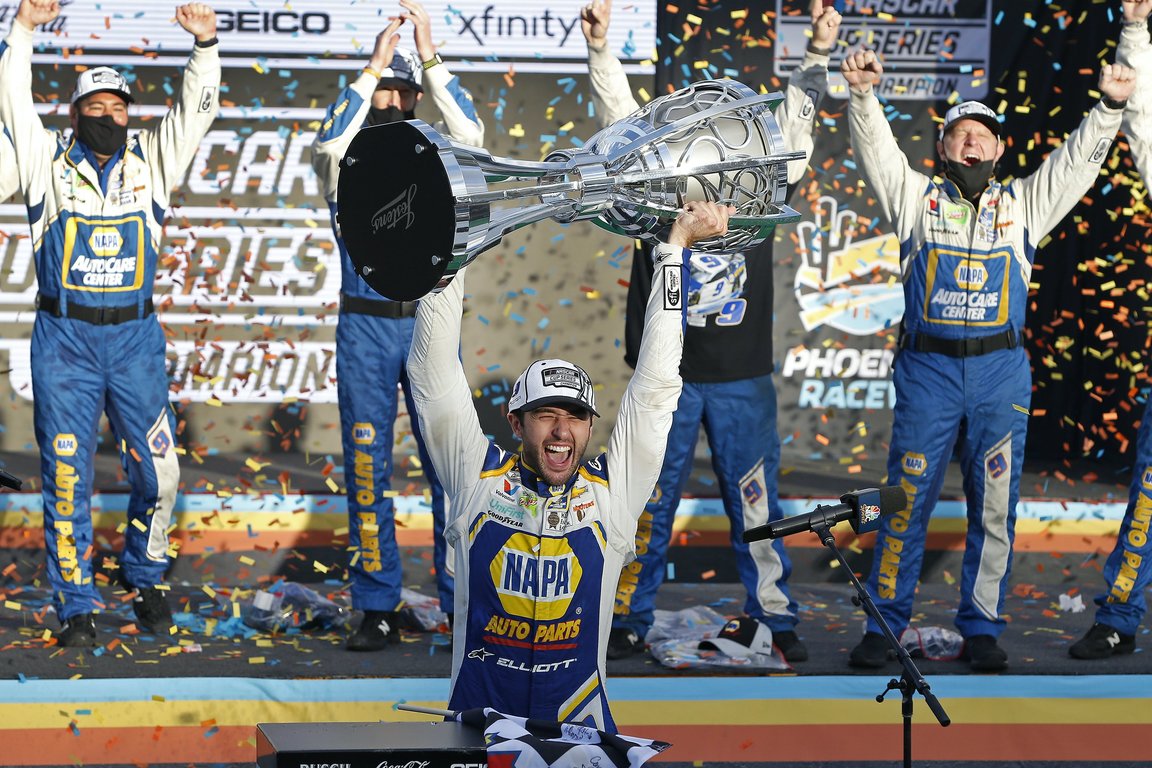 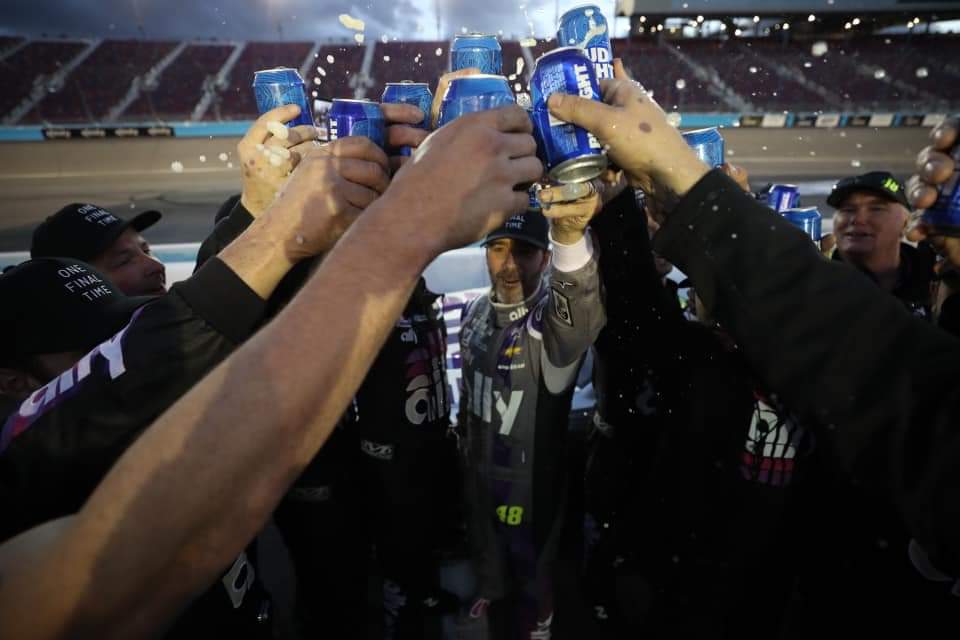 I'm gonna miss him. Thanks, Jimmy, for your contributions to NASCAR racing.
W

Matt Kaulig announced his race organization is on the market for getting a charter in 2022.
W

Las Vegas Motor Speedway has announced they are hold 2 cup races a year through 2031. They extended a sponsor contract with the Las Vegas Convention and Visitors Authority. What is known is the sponsor is cutting back on the amount money they sponsor a year though. The sponsorship before 2022 was for for 2.5 million dollars each year.

Superstar Racing Experience announced last week Friday that Eldora Speedway will be one of the tracks on their schedule.
W

John Hunter Nemechek announced he will not be returning to Front Row Motor Sports next year.

I don't know where he is going to go. I know his dad has a truck series team. I have no idea on possible rides John Hunter Nemechek could go to outside Spire Motorsports on the cup side. Spire are going to have Hendrick equipment next year, but did not announce drivers yet.
W

Kyle is getting Ben Beshore as a crew chief. Ben for the last 2 seasons has been a crew chief in the Xfinity series with a total of 8 win.s He was Harrison Burton's crew chief last year and Harrison Burton had a great rookie season with 4 wins, 15 top 5's and 22 top 10's.
W

Ryan Preece is returning to JTG Daughtery in 2021.

Matt Kenseth also announced full time racing is over for him.
W

wdwfan4ver said:
Matt Kaulig announced his race organization is on the market for getting a charter in 2022.
Click to expand...

I got an update of Kaulig Racing. The intend to run all Super Speedway and road course races in 2021 for the cup series. They did not say, but I know their driver line up for the Xfinity series. Currently they have Justin Haley, Jeb Burton and Aj Allmendinger. I'm guessing they are are going to use a driver based on the type of track.
W

Got an update on John Hunter Nemechek. He left Front Row Racing for Kyle Busch Motorsports in the truck series although I question it. I do have 2 things on why. John this year struggled due to not having practice as a rookie for a mid pack at best team and 2021 will have 28 cup races without practice.

The 2nd thing is John Hunter Nemechek is betting on 23XI racing expanding. Denny did say his race team has plans for expanding in the future.

What John Hunter Nemechek is doing for going to Toyota is very risky. Kyle Busch Motorsports was a top truck organization, but I think there the organization didn't adjust to the engine rules and now that organization lost their best crew chief to the cup series. Kyle is betting on John due winning 6 times in the truck series for his dad's underfunded race team.

What I know about Toyota on the cup level beside 23XI racing is no one knows how long Denny Hamlin and Truex will race. Some drivers still are great in their 40's, but some decline like in the case of Jimmie Johnson. Denny turned 40 earlier this month and Truex will be 41 in June next year. Toyota's farm system is an issue in the past having more drivers than seats, but the talent level at JGR is a problem was Xfinity series in 2020. Harrison Burton was great as a rookie, but rest of JGR Xfinity drivers is not much to write home about along Brandon Jones had 3 wins.
Last edited: Monday at 10:30 PM
You must log in or register to reply here.